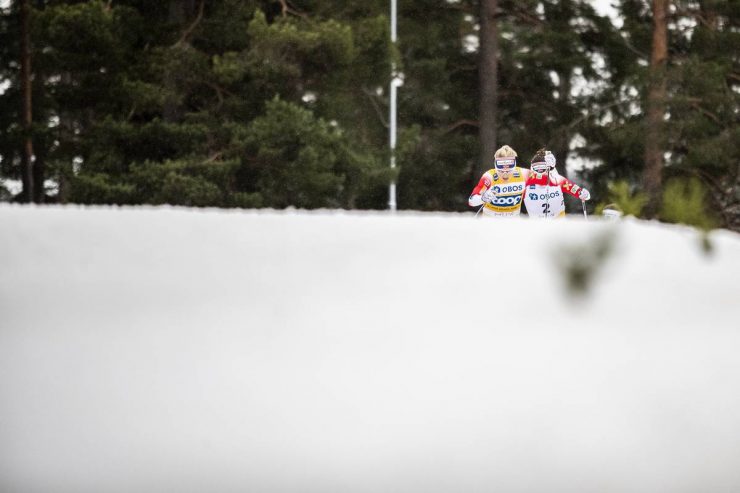 As always, it was a reset: a new day at the start of a World Cup race. On Sunday, the ribbon of snow in Falun, Sweden offered an opportunity for a sixty-six women field to race head to head in a 10 k mass start freestyle race.

With a course that some noted was softened in difficulty by eliminating the infamous Moderbakken climb — which has become a feared incline on the World Cup circuit — the racing was expected to be a close contact affair. The women raced four laps of a roughly 2.5 k circuit featuring punchy hills and terrain requiring athletes to work with little opportunity to recover.

Coming into the race, Norway’s Therese Johaug had been synonymous with the words distance race and victory. She has been unstoppable. She has won 11 of the last 13 individual distance events on the World Cup. According to FIS, in a string of 24 distance races, Johaug has placed first or second in 23 of them: the only outlier a 4th place in the 10 k mass start classic in Val di Fiemme, Italy during the fifth stage of the 2019-2020 Tour de Ski.

Again, it has been a year in which Johaug has been dominant in the win column, but not necessarily in her margin of victory. In year’s past, seeing Johaug way off the front, a minute plus ahead of the field was not uncommon. This season, the gaps have been more humane.

From the start on Sunday, Johaug was out front and the skier to match. Through the first lap, it was Johaug, Heidi Weng of Norway, Ebba Andersson of Sweden, Astrid Uhrenholdt Jacobsen of Norway, and Sweden’s reassimilating Frida Karlsson who had been off the World Cup this season since the opening weekend in Ruka, Finland for failing to meet team body-metric requirements, who looked poised to keep pace. 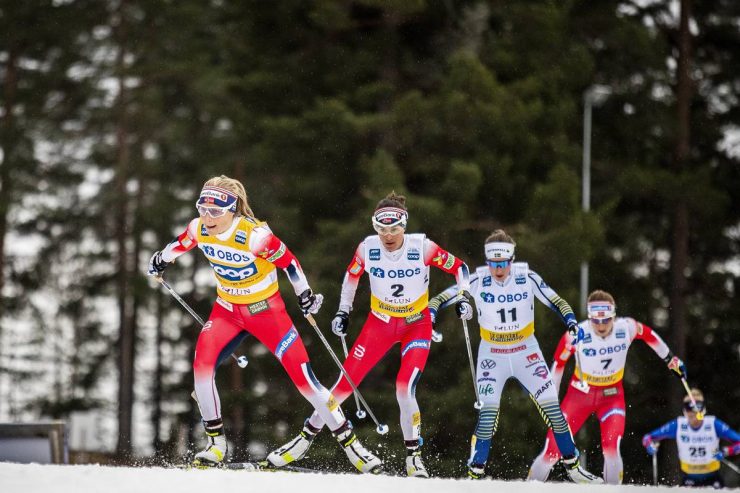 Early on, Weng took pulls and Andersson contributed to a pace that would snap any imaginable cord to those wishing to gap up. At 3.6 k Johaug, Weng, and Andersson pushed discernibly ahead, as Jacobsen and Karlsson fell off to a bit more than six seconds back. Jessie Diggins, starting in bib 5 for the U.S., came through the 3.6 k check in eighth, at 17.2 seconds behind, as the Norwegians and Swedes kept the tempo hot. 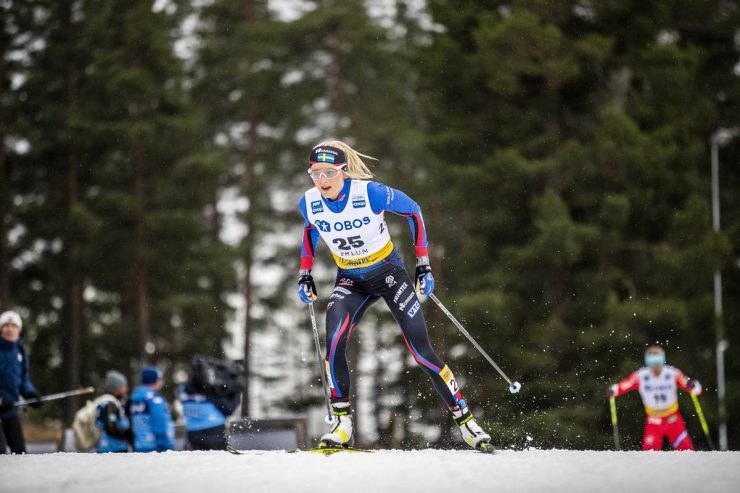 Frida Karlsson back on the World Cup for Sweden. (Photo: NordicFocus)

Although a mass start, the race at the sharp end whittled away at the masses. Three off the front was for real. Morderbakken or not, there would be no catching them: the three leaders had 18.8 seconds on Karlsson in fourth and 19.4 seconds on Jacobsen in fifth by 6.7 k.

Weng hung on until the closing 1.5 k when she too began to wither as Johaug began to write the conclusion to this 10 k script. The overall World Cup distance leader, Johaug, won in 25:04.1. And as she crossed the line, arms raised to the sky, Johaug displayed a stoke often reserved for bigger championship stages. Andersson, who missed the first part of the season with an injury, placed second (+6.5). For Andersson, her second place matched her season best result during the fourth stage of the Tour de Ski, a 10 k mass start classic. Weng hung on for third (+23.8). 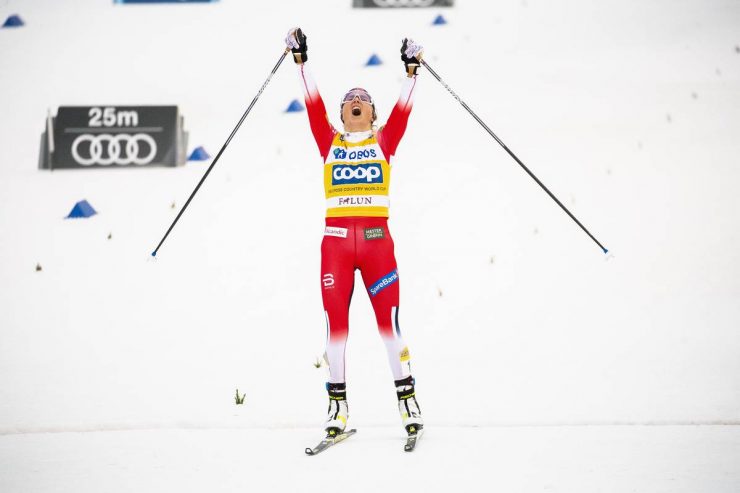 After Sunday’s race, Johaug has a commanding lead in the distance standings with 1011 points. Weng sits in second with 665 points.

“It was tough conditions and of course with a mass start in Skating it’s not my favorite but I think the tracks were so slow and it was better than I had expected it,” Johaug told FIS after the race.

Diggins was the top American in 14th, 57 seconds back. At moments Diggins appeared poised to link up with Jacobsen and Karlsson in the early stages, but oftentimes she found herself working alone. In the windy conditions, the effort became too taxing.

“It wasn’t my best day out there but I was proud how I just kept fighting even as a large pack was moving in to catch me up, I did everything I could in the moment,” Diggins said after the race.

She comes off a training camp at mid-altitude in Seefeld, Austria and a mystery kink in her neck that appeared the morning of Saturday’s classic sprint in Falun. (In the audio posted below, Diggins discussed how she has been handling the pressure of expectations after realizing the dream of an Olympic gold medal.) 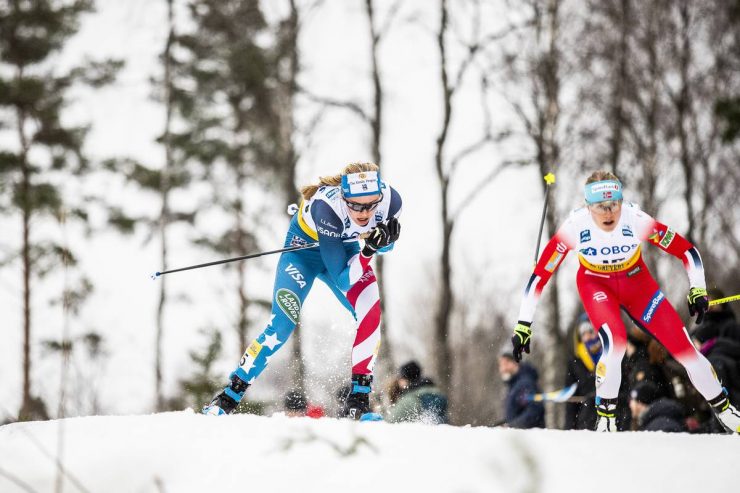 “I had a challenging day today,” Brennan emailed. “Nothing went particularly wrong but I just wasn’t moving as fast as I thought I should be. It was very tough conditions with no natural snow and warm temperatures and falling rain. It was a short 2.5km loop that didn’t provide much rest but also not too many climbs. While this type of race has never been my forte, I did expect a little bit more of myself. I will take the week to hopefully find a little more speed and be ready for the Ski Tour 2020.” 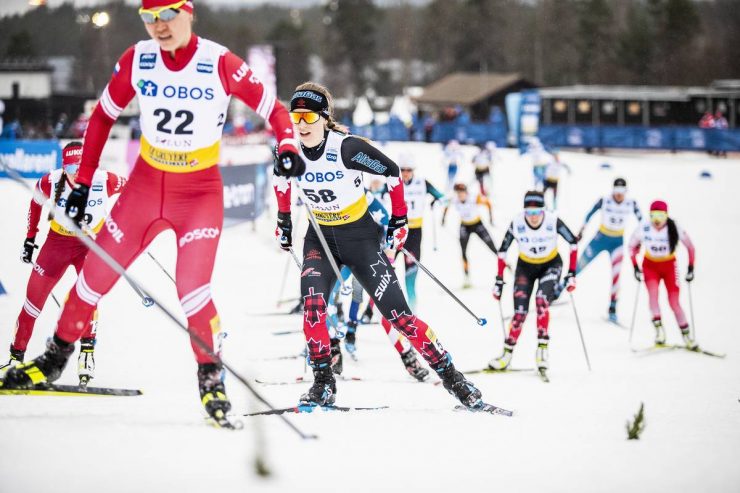 Racing continues next Saturday with a skate sprint in Åre, Sweden — the start of the Ski Tour 2020. 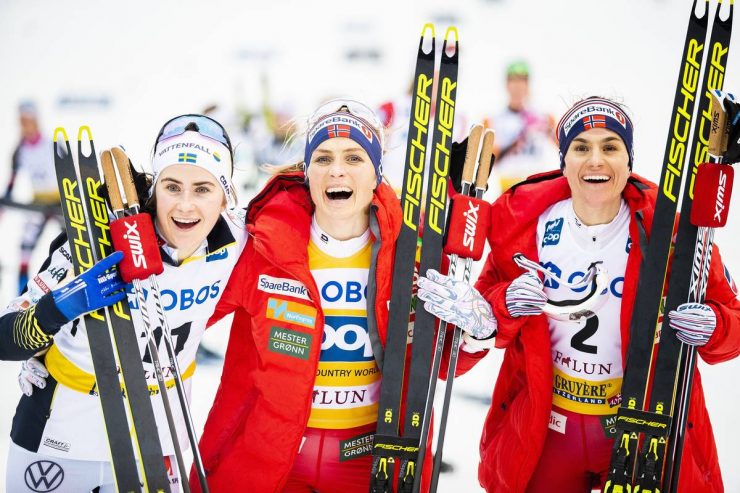