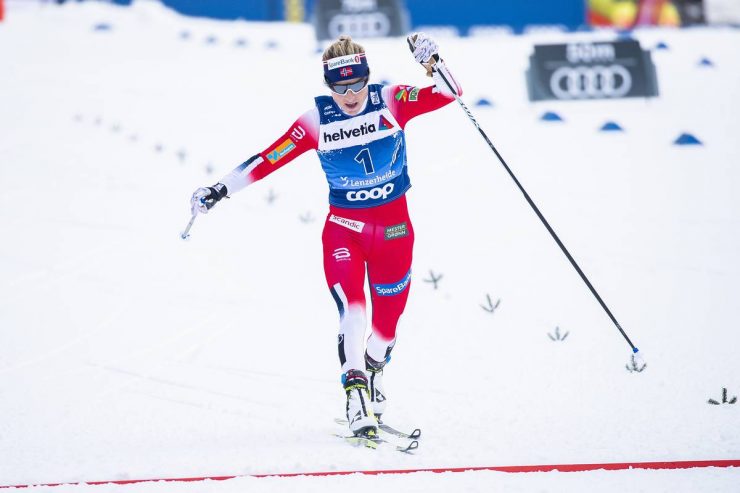 Norway’s Therese Johaug crossing the finish in first place during the first stage of the TdS in Lenzerheide, Switzerland. (Photo: NordicFocus)

Saturday marked the start of the 14th Tour de Ski in Lenzerheide, Switzerland. Forgoing the traditional prologue start to determine time back to the leader, organizers threw in a spicy 11-kilometer mass start freestyle. Easy to follow for fans, maybe not so much for those following in the wake of Norway’s Therese Johaug.

The scene was a Swiss winter ideal: plentiful snow, portions of the course dappled in sunlight, others shrouded in a drifting-in and drifting-out ground fog. Thousands of fans lined the course proving in the right venue, on a festive day, organizing committees can throw a cross-country party. 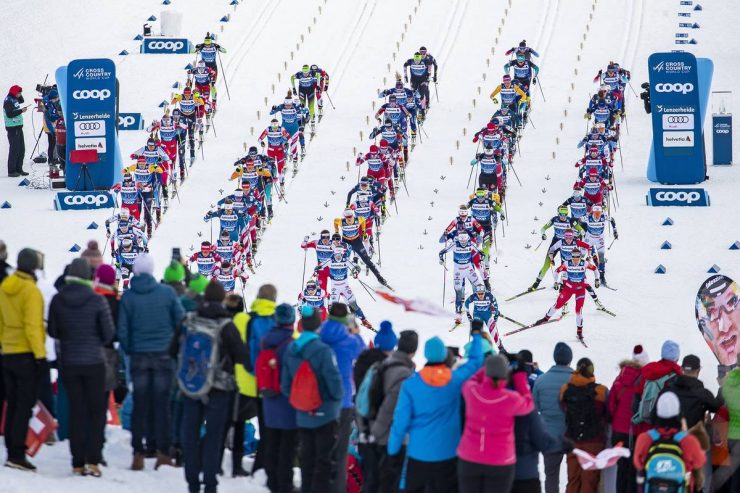 Quite literally, a massive mass start on the World Cup. Stage 1 of the 2019-2020 Tour de Ski in Lenzerheide, Switzerland. (Photo: NirdicFocus) 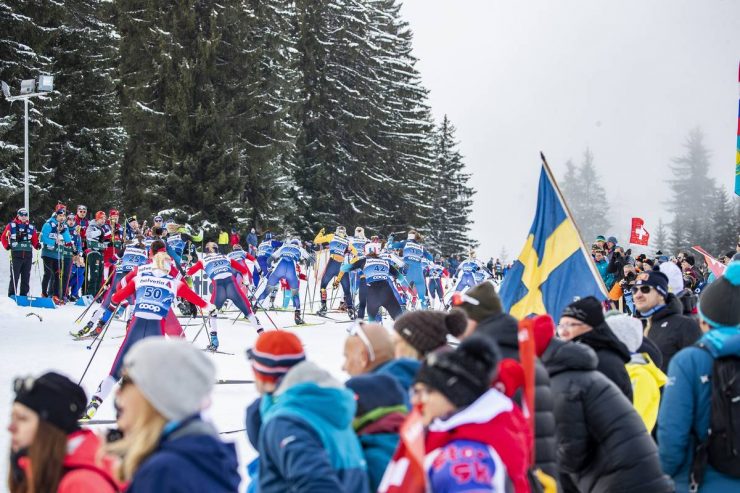 Crowds in full force during the first stage of 2019-2020 in Lenzerheide, Switzerland. (Photo: NordicFocus)

The party jumped into Swiss-cowbell-ringing high gear when the starter’s gun fired. The hot pace was palpable. It appeared no skier wanted to be left dangling too far from Johaug who pulled through to lead 1:20 into the race. Jessie Diggins and Sadie Maubet Bjornsen matched the pace upfront. But, by then, with roughly 1/10th of the race completed, the field was strung out. The vibe was clear: no matter what an athlete’s intent, they all were trying to minimize the hurt Johaug would inflict over the next 10 k.

We could exhaustively detail the splits and time back as the race unfolded. At moments it appeared Johaug was simply at a level where imagining a one minute gap across the finish line wasn’t outlandish. However, with each shot of Johaug churning her high-tempo technique or the on-course mics picking up her solitary but thoroughbred breathing, she was chased by a group just out of contact.

This was not a total runaway for Johaug. 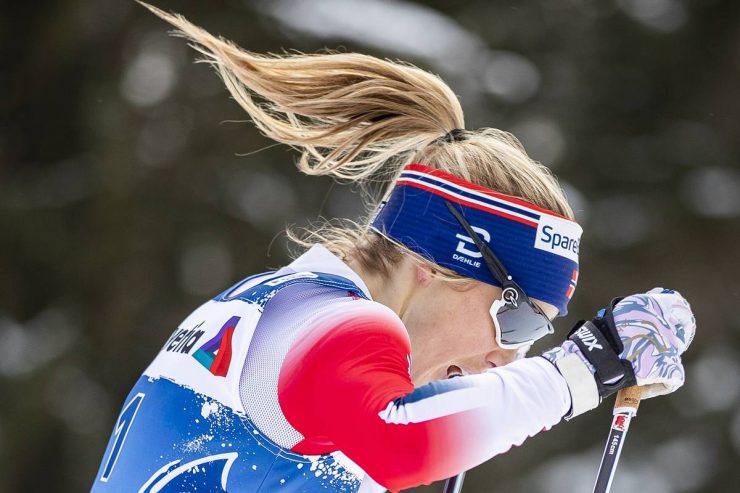 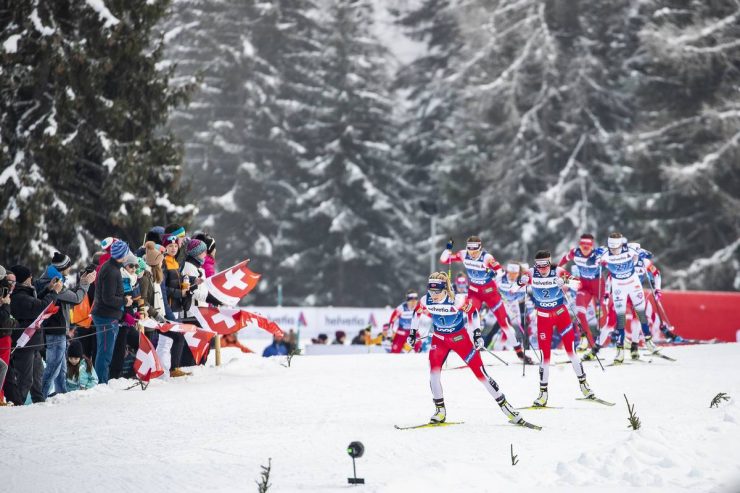 Therese Johaug (NOR), Heidi Weng (NOR), Astrid Uhrenholdt Jacobsen (NOR), (l-r) during Stage 1 of the 2019-2020 Tour de Ski in Lenzerheide, Switzerland. (Photo: NordicFocus) 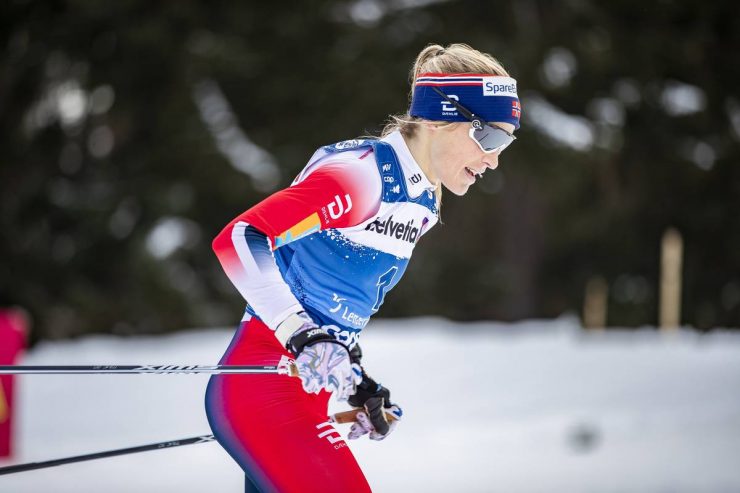 By 5.6 k, the front chase group had coalesced. Two skiers who had yet to compete on the World Cup this season, Sweden’s Ebba Andersson and Norway’s Ingvild Flugstad Østberg, proved racing into form wasn’t a necessity. They were joined by Norwegians Astrid Uhrenholdt Jacobsen, Heidi Weng, and Russia’s Natalia Nepryaeva.

During the three laps of the 3.3 k course, Jacobsen and Nepryeava fell off slightly. Weng, Andersson, and Østberg kept it interesting during this opening act of the TdS. At 8.6 k Joahug was nearly 19 seconds up on Østberg. By the finish, the chasers took a chunk of time out of Johaug’s lead. 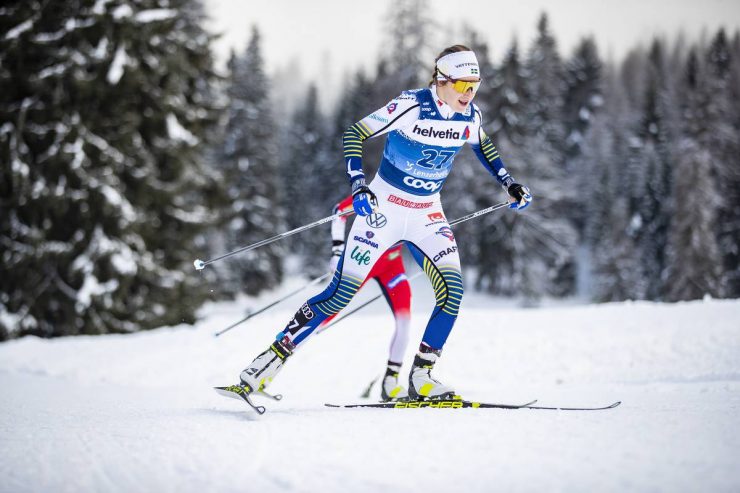 Ebba Andersson of Sweden on her way to third during the first stage of the 2019-2020 Tour de Ski. (Photo: NordicFocus) 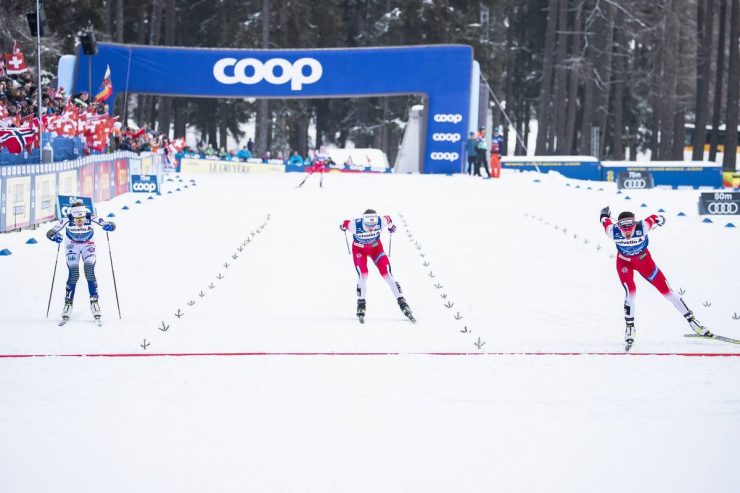 “I was really surprised today, mass start in skating,” Johaug told FIS after the race. “In my mind, I think there would be other girls at the finish line. I had a really good day today. And my skis were perfect. I decided with my trainer and brother that on the first lap I didn’t go so fast, and out of the second lap I should speed up. And then I get a gap. I am so so happy. The mass start in 10 k, it is not my favorite distance so I am really surprised and really happy now.”

According to the FIS database, the last 10 k mass start skate Johaug contested was in 2016, prior to her ban for a positive doping test. In that 2016 Falun, Sweden race, she beat a second place Weng by only 8.8 seconds. (Johaug served an 18-month ban, returning to the World Cup in November of 2018.)

The U.S. women came into the race with formidable stats. Just this year, of the nine races contested prior to Saturday’s TdS Stage 1, including team events, there have been six U.S. podiums. 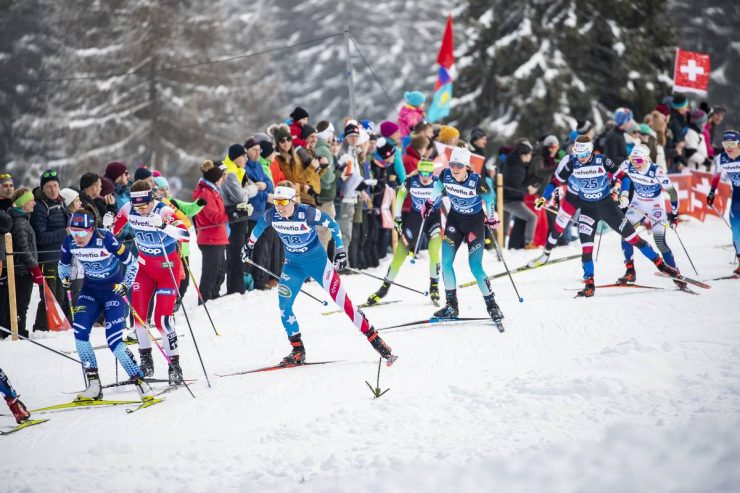 “Today was a bit of a mixed day,” Brennan emailed several media outlets. “Having missed the last two weekends of racing, I wasn’t quite sure where I was at, but I felt really good in the race and am really happy with my effort. We struggled a bit with our skis and I maybe wasted a bit too much energy trying to move up in places that didn’t make sense with the skis I had on my feet. The good news is that it was overall a very tight race so, despite less than perfect skis, I didn’t lose too much time in the overall and am still optimistic for the rest of the tour.” 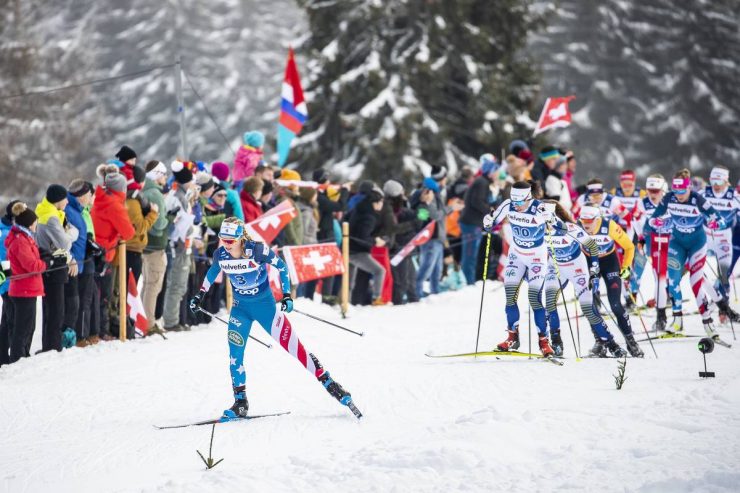 During a post-race interview with U.S. World Cup Coach Matt Whitcomb, he was blunt when discussing the team’s lackluster skis. “When we saw them at about 3.5 k coming out of the stadium on the long gradual uphill,  Sadie and Jessie just looked tired,” Whitcomb said. “And frankly they are not tired. They are in awesome shape. That’s when we knew something was wrong.”

Whitcomb explained during the post-race call that the FIS asked coaches to vote on whether to include or eliminate Stage 1 time bonuses. Initially, Stage 1 was slated for time bonuses at 3.3 k and 6.6 k. However, with the prospect of a Johaug time-bonus sweep, teams voted to eliminate those bonuses for Saturday’s racing.

Racing continues in Lenzerheide tomorrow with a 1.5 k skate sprint for the women. 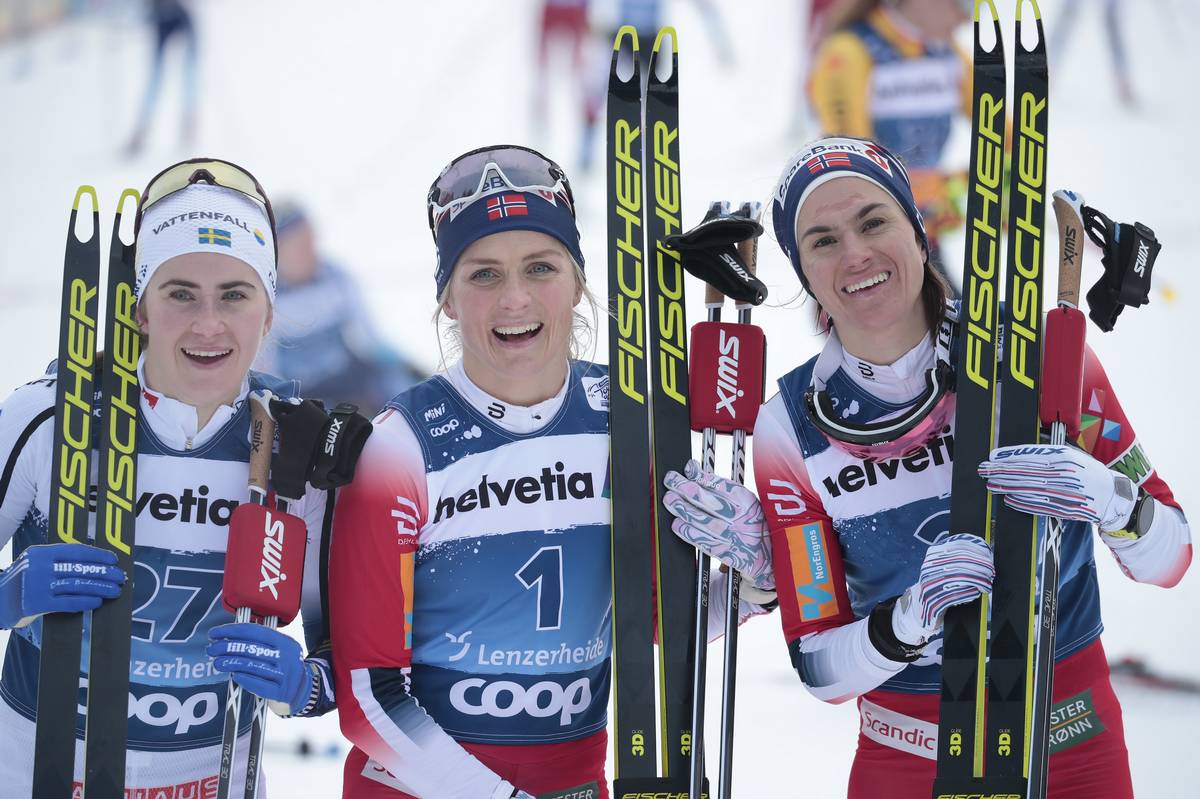