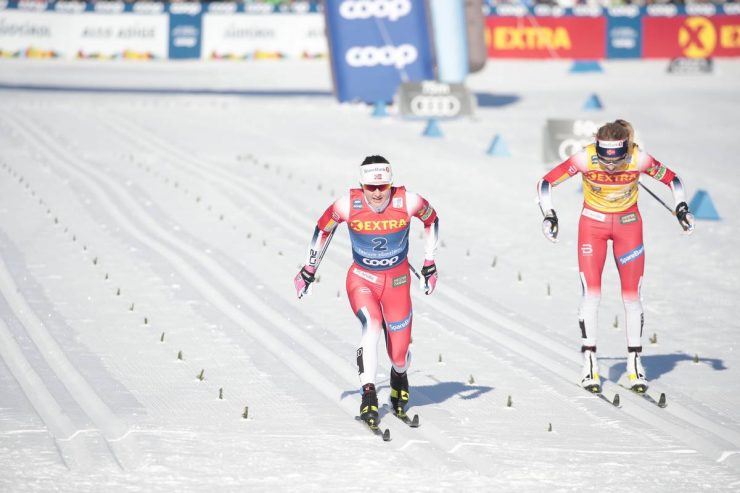 Pursuit day at the Tour de Ski. Fifty-one skiers chased the yellow Tour de Ski leaders bib of Norway’s Therese Johaug during Stage 4, a 10-kilometer classic pursuit. Start times for the day’s pursuit were based on time back in Stage 3, a 10 k interval start skate.

Johaug started first, with Norwegian teammate Ingvild Flugstad Østberg, 0.1 seconds back. A few skiers raced off with a small enough time deficit to dream of making contact with the two leaders. From Norway, Heidi Weng strode off with Sweden’s Ebba Andersson at 11 seconds, Astrid Uhrenholdt Jacobsen (NOR) at 21 seconds, Natalia Nepryaeva another four seconds back, and a trio of Americans, Jessie Diggins (+36.0), Sadie Maubet Bjornsen (+43.0), and Rosie Brennan (+45.0) comprised the first nine skiers on course. 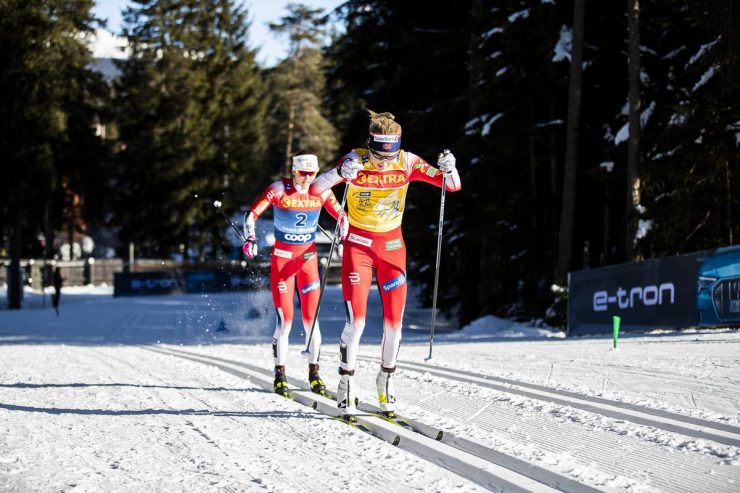 With stable conditions, and skiers racing in and out of full sun under the gaze of the Dolomites, Johaug and Østberg made this day about keeping chasing athletes at bay and engaging in a one on one pacing duel up front.

The only flinch in their steady-state effort came 4:50 into the race when Østberg tripped cresting a hill and nearly tumbled. Johaug lost no momentum as she pushed over the top, and tucked into a long descent. Østberg lost almost no time in righting herself and soon caught back on.

The Joahug-Østberg pace was hot enough to pad their time gap over Weng and Andersson to 19.6 seconds at 3.3 k. With the knowledge that time is what matters as the TdS wanes, the two Norwegians in the lead never let up. The tactics were clear: no playing tactical cat and mouse skiing. Go full gas. 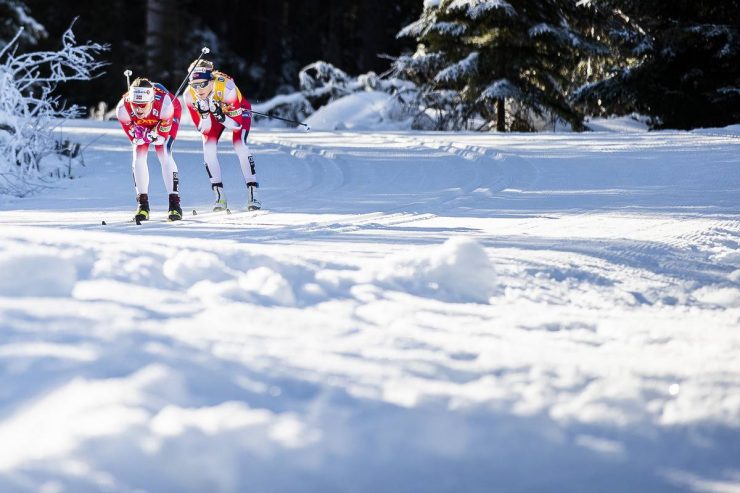 Neither Johaug or Østberg wavered. Just after the 4.6 k checkpoint, as Johaug cranked up the tracks, Østberg matched her with a herringbone-run. They were glued together —  the two Norwegians untethered to the chase behind yet each unable to drop the other.

The only Johaug move that momentarily created a gap came nearly twenty-six minutes into the race. The overall TdS leader charged up a rise at a pace Østberg could not hold. Over the top, and gliding out towards the finish straight, Johaug held a 10-meter cushion. Rounding the left-hand corner into the finish, as Østberg powered forward, Johaug’s lead evaporated. 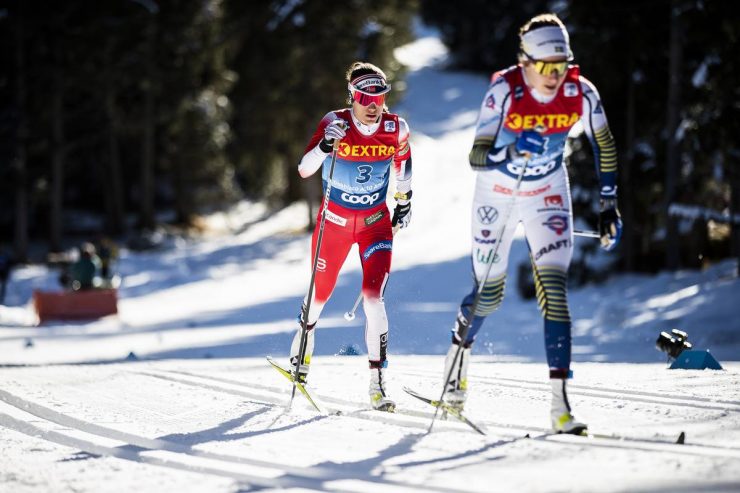 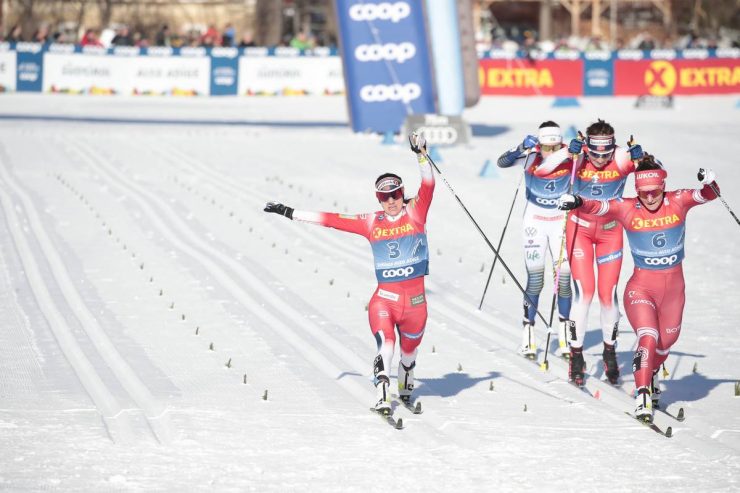 For the Americans – Diggins, Maubet Bjornsen, and Brennan  – that began in bibs 7,8, and 9 respectively, fell back in the standings. 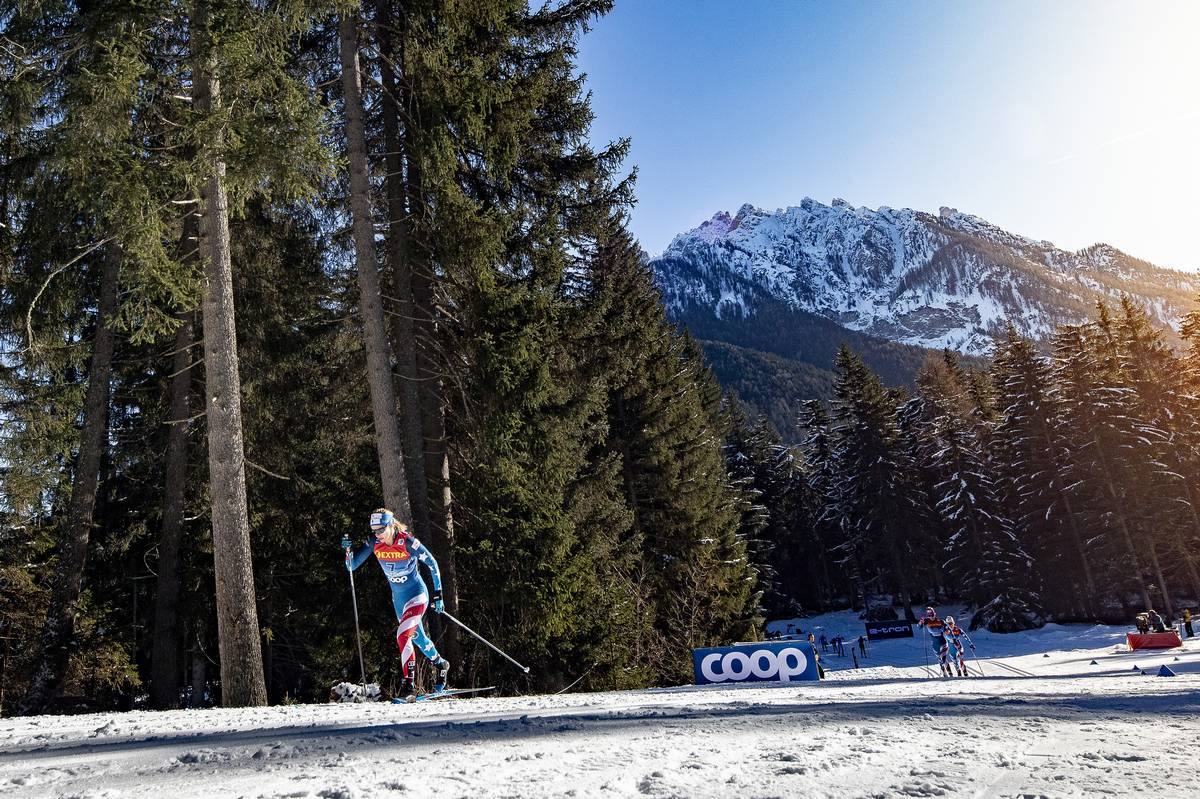 Jessie Diggins striding amidst the Dolomites during Stage 4 of the Tour de Ski. (Photo: NordicFocus) 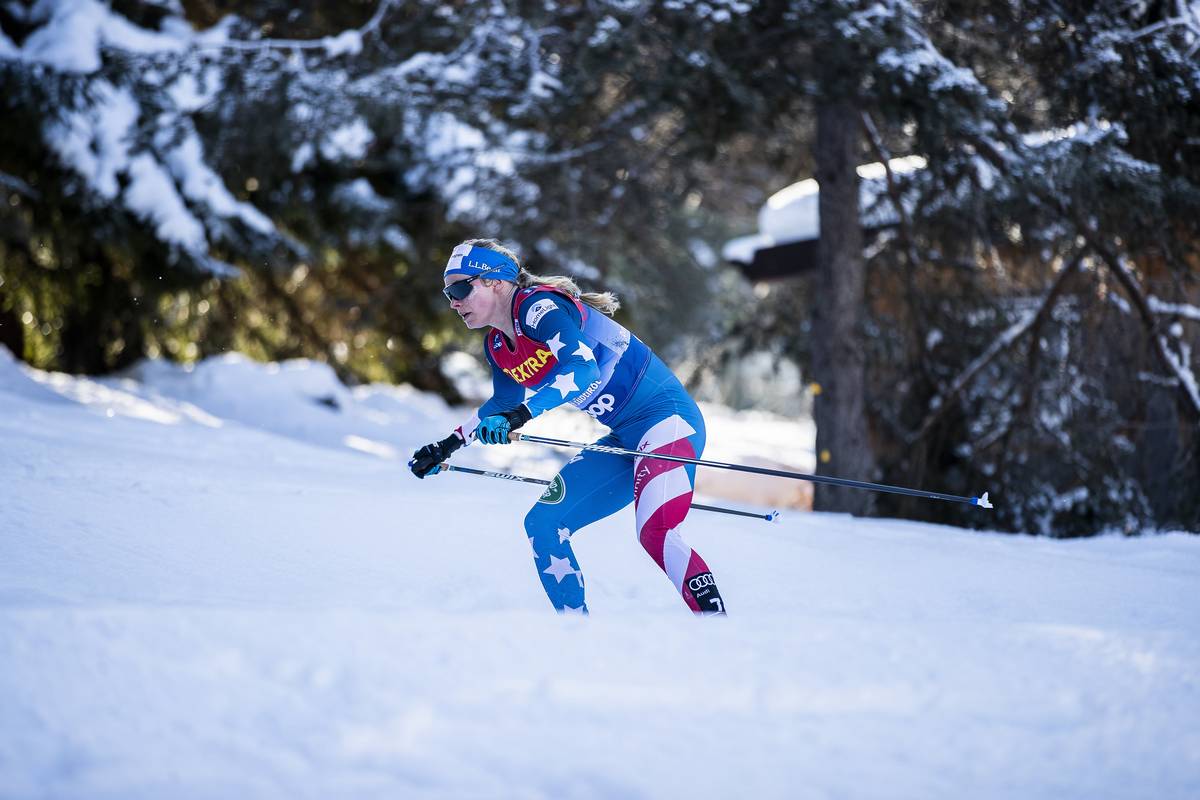 It definitely wasn’t the day we were looking for results-wise,” said U.S. World Cup Coach Matt Whitcomb. “It wasn’t a catastrophe by any means.”

Whitcomb also said the skis for the team’s leading women were on the slippery side for kick. “We felt like as a team we found quite a good kick wax and good glide wax and had great reviews for Katharine [Ogden] and Sophie [Cadlwell], and the guys felt like they were on some really good skis. But unfortunately, the three women who are really in the hunt felt that they were slick.” 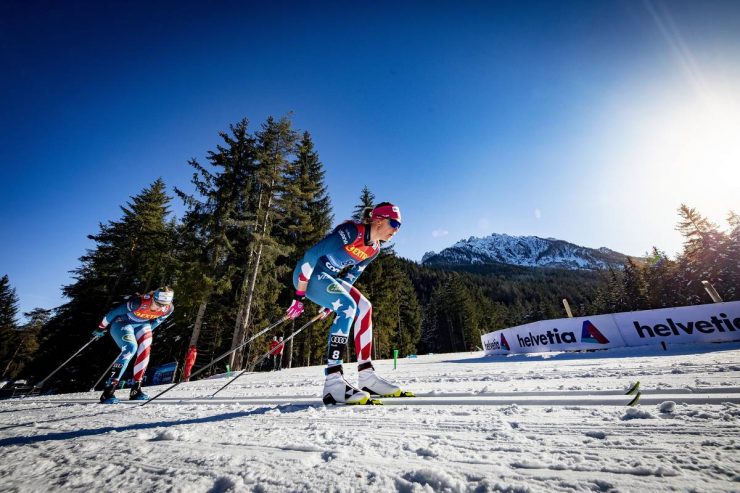 Johaug remains the leader of the TdS overall. Overall times and standings after Stage 4 were tabulated from each athlete’s time of day on course. Those times are found on the race document cataloging each athlete’s FIS points for the race.

Østberg’s on course time was 26:50.5, Johaug’s 26:51.9 — a difference of 1.4 seconds. Østberg began the day twenty-three seconds behind Johaug in the overall. With rounding to the nearest whole number, Østberg is now twenty-two seconds back in second place, after Stage 4, to Johaug. 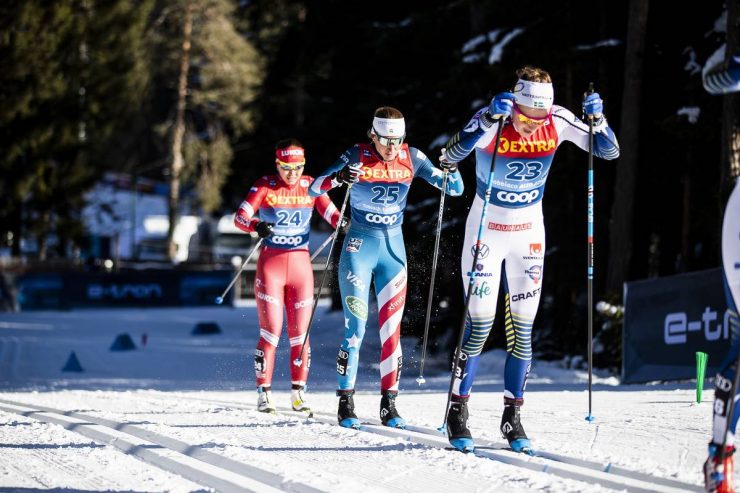 Racing continues for the women on Friday with a 10 k mass start classic in Val di Fiemme, Italy. Tomorrow is a rest day for athletes. 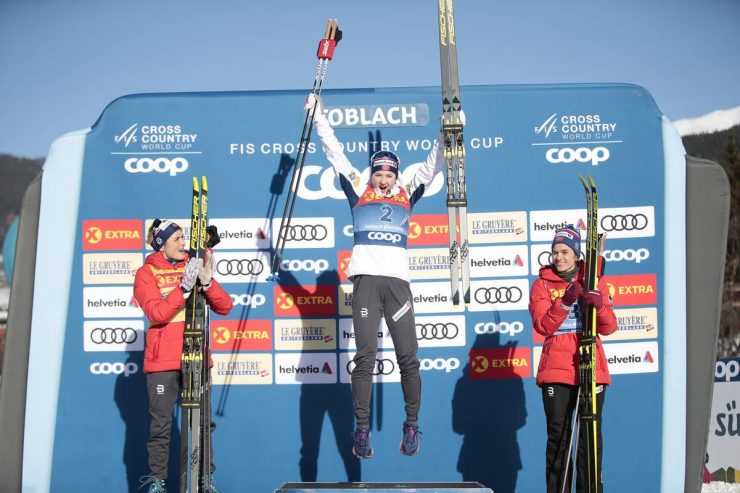