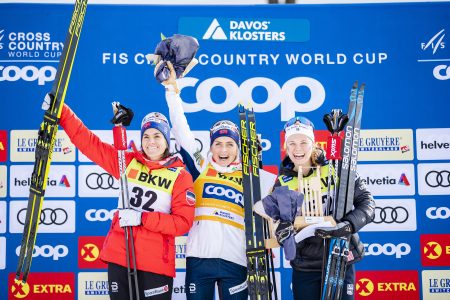 Day two in Davos, Switzerland looked much like the first; blue skies, fast tracks, and spectacular alpen backdrop. Following an interval start, athletes time-trialed through two 5-kilometer loops loops of a course that predominantly climbs the first 3k, ripping back toward the stadium the last two. Gone are the days of the stopwatch and furious arithmetic, coaches with tablets peppered the woods near checkpoints to relay information to their athletes as they skated by, hunting the shadows of the racers starting before them. Data on splits and time back at the coaches’ fingertips, translating to pacing advice for athletes. 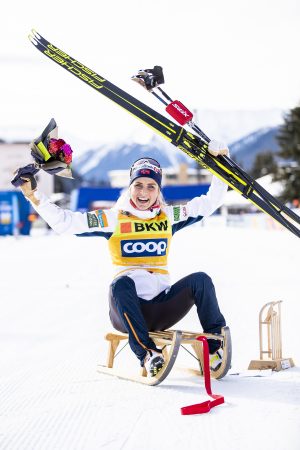 Because of her full-throttle effort that could not be matched on the day, her early start and finish provided her with ample time in the fur-lined leader chair. Plenty of time for Johaug, who did not appear concerned about the athletes chasing her time, to comfortably review the effort on her watch and catch up on her text messages, as she seemed to be doing.

“Of course, I feel that we are in the altitude, but it was a really good race today,” Johaug told FIS after her race. “My skis were perfect and my body also felt also really good. I’m really happy to be on top of the podium again.”

As the race behind Johaug unfolded, two athletes emerged at the top of the ranks in contention for the podium: Heidi Weng of Norway wearing bib 32 and Jessie Diggins racing with more information on splits in bib 52. 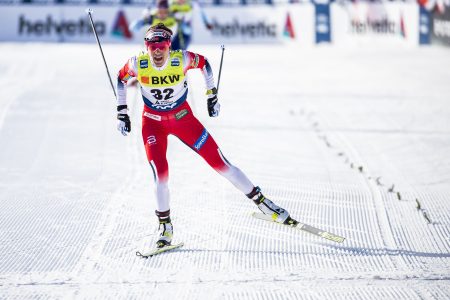 On her first lap, Diggins crept under Weng’s times at each checkpoint, her splits a second or two faster than the Norwegian’s. Ascending the long climb in the second lap, Diggins could not keep pace with Weng’s ghost and began trailing a few seconds behind.

Leaving nothing behind, Diggins powered through the descent, not allowing the small gap to widen. Working through the final straightaway and collapsed in the finish corral, gasping loudly for the oxygen her body craved. Weng’s time held up for second place (+30.6) and Diggins sealed the deal on third (+36.4). 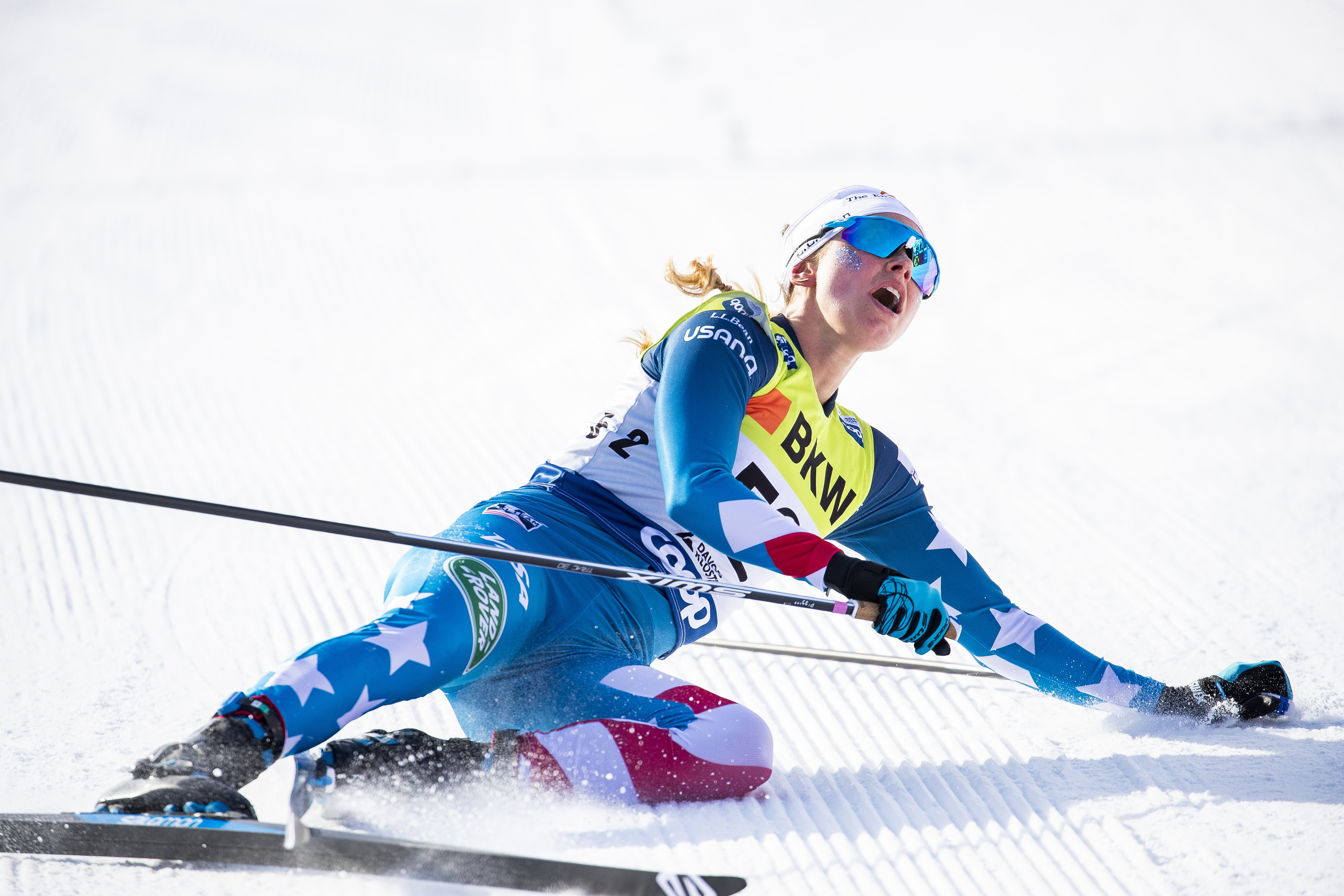 Nothing left on the course, Jessie Diggins collapses at the finish of the 10-kilometer skate in Davos, Switzerland. (Photo: NordicFocus) 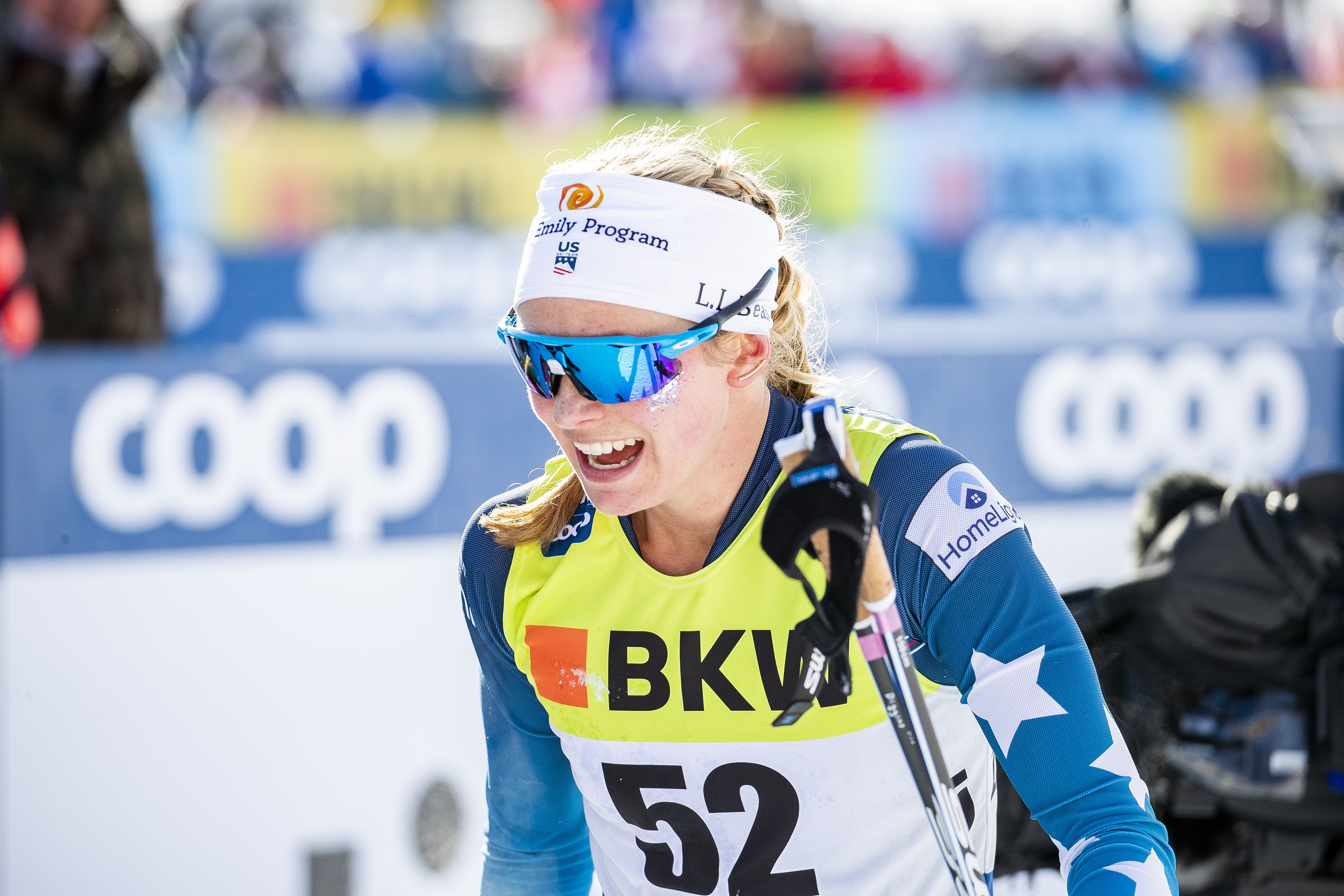 A smile or a grimace? Jessie Diggins takes third at the 10-kilometer skate race in Davos, Switzerland. (Photo: NordicFocus)

Camaraderie and sportsmanship were on display as the women congratulated each other and chatted during their top-3 finish line photo.

“I never go fast here, this is awesome!” Diggins exclaimed with a laugh to Weng as they lined up for the shot. Today’s result was her career best in sprint or distance in Davos, building from a fifth place finish last year.

They jocularly suggested words they could say as they smiled.

“Cheese!” offered Diggins, a nod to the large blocks of it that they would be taking home. 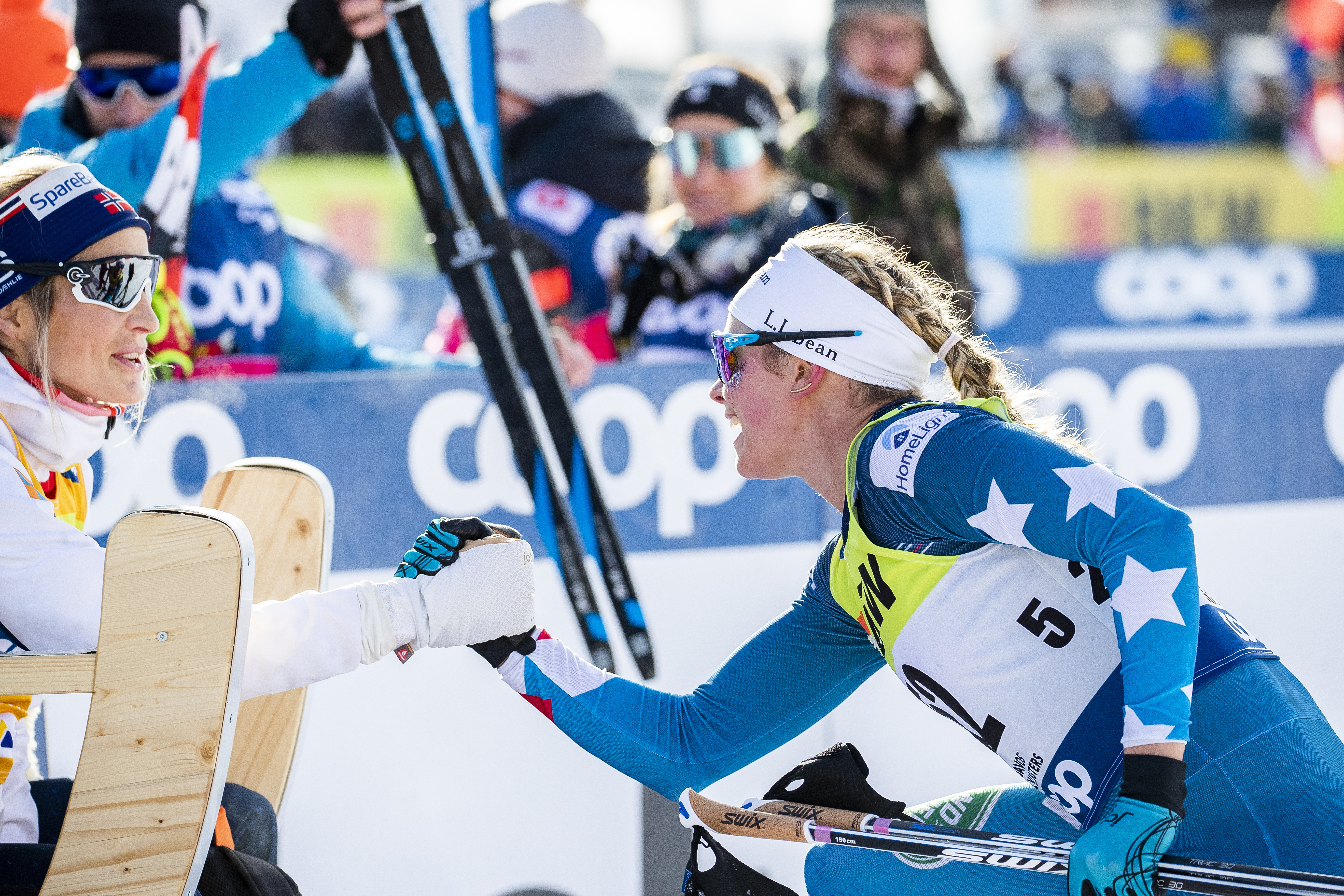 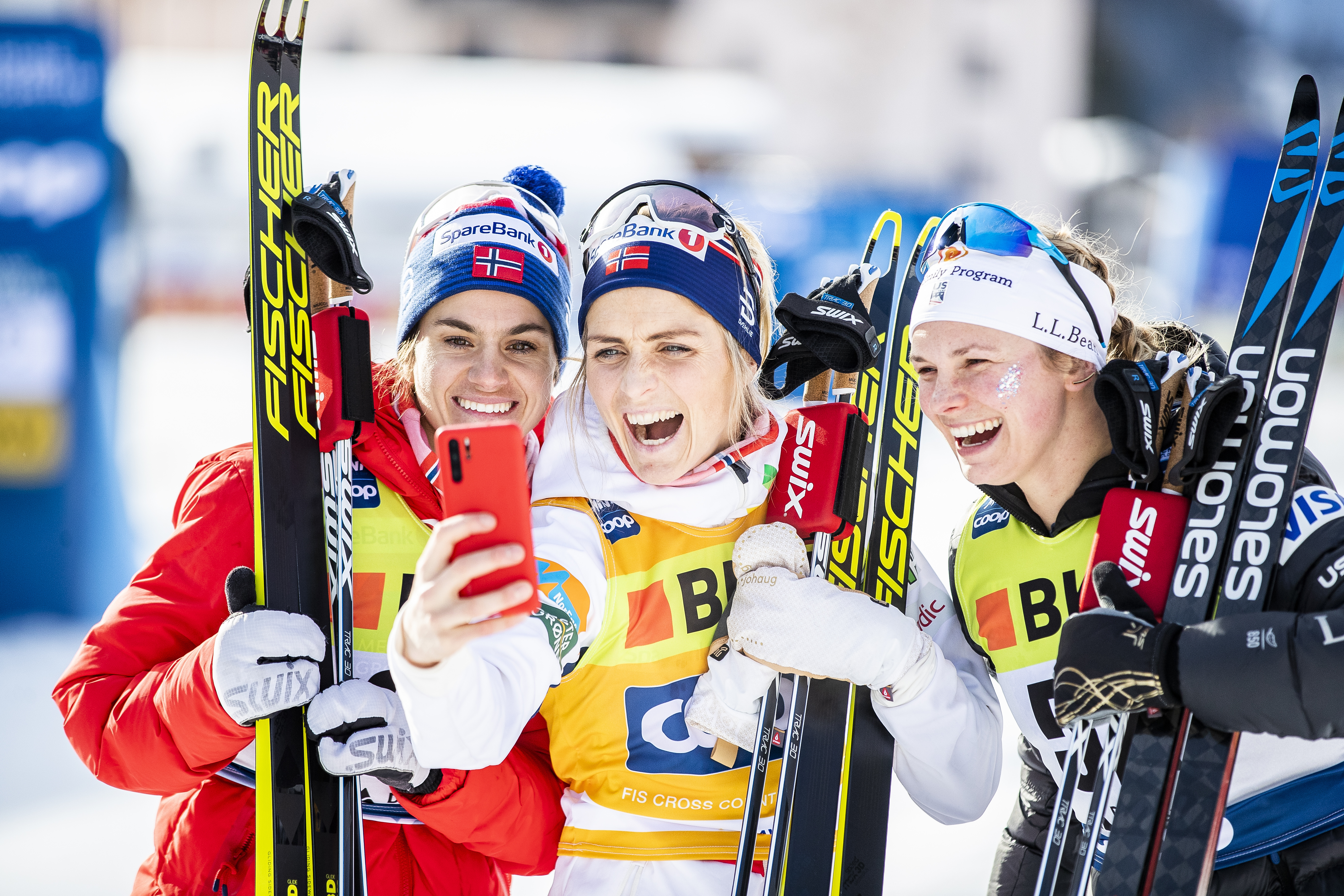 The podium of the 10-kilometer freestyle in Davos, Switzerland snaps a selfie. (Photo: NordicFocus)

FIS asked Johaug what it meant to share the podium with the other two accomplished women, and how she felt as she wrapped up Period 1 of racing.

“It means a lot. Heidi had a really good race and Jessica too. It’s Christmas time for me. We’re staying here until Thursday then going home before Tour de Ski. It has been a really good season  so far, so now I think it will be really good to have a little bit of a break.” 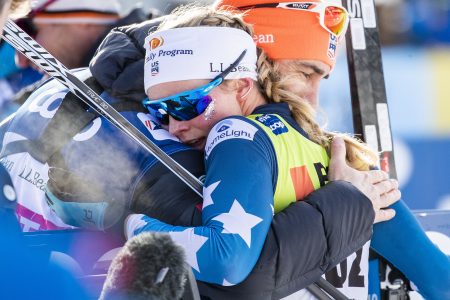 Because of poor internet connection, FasterSkier was unable to record an audio interview with Diggins. She alternatively responded via email.

“I haven’t historically had great races here because I take my time working into the season, and this course is extremely difficult to pace with the first 3 km being an absolute grind up the valley and then a working downhill,” Diggins wrote about the day. “This year one of my goals was to come into the season a little closer to form than in the past, and it’s been awesome to feel like I’m in great shape while still working my way into top race form! I was sick earlier in the week, so getting healthy in time to race this weekend was a big focus, and then feeling rested and ready to rock and roll today definitely contributed to a good race effort. And of course, we had great skis today! I had a lot of fun testing with Cork and Frise from Salomon, and even with a short window on course we narrowed it down to a really fast pair of skis.”

Diggins commented on the information she received from coaches on course and how that influenced her strategy.

“It was nice to have the splits on course because this is such a hard course to pace, and I knew it was going well from the numbers I was getting during the race. It’s also super motivating when you hear you’re fighting for podium positions!”

In order to get some rest before the Tour de Ski, Diggins will sit out next weekends sprint races in Planica, Slovenia.

“I’ll stay in Davos the next two weeks training, and my family is coming over for Christmas so I’m very much looking forward to having quality time with them!” 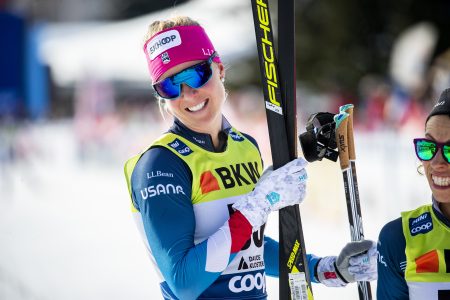 Also finishing inside the top-10, Sadie Maubet Bjornsen crossed the line with the 9th fastest time of day, advancing from her 12th place finish last year in Davos. Her effort modeled perfect pacing; Maubet Bjornsen’s position in the field held steady with little variance and she skied her second lap with a 12 second negative split.

With consistently strong finishes throughout Period 1, Maubet Bjornsen is ranked 4th on the Overall World Cup list, trailing her teammate Diggins by 65 points. 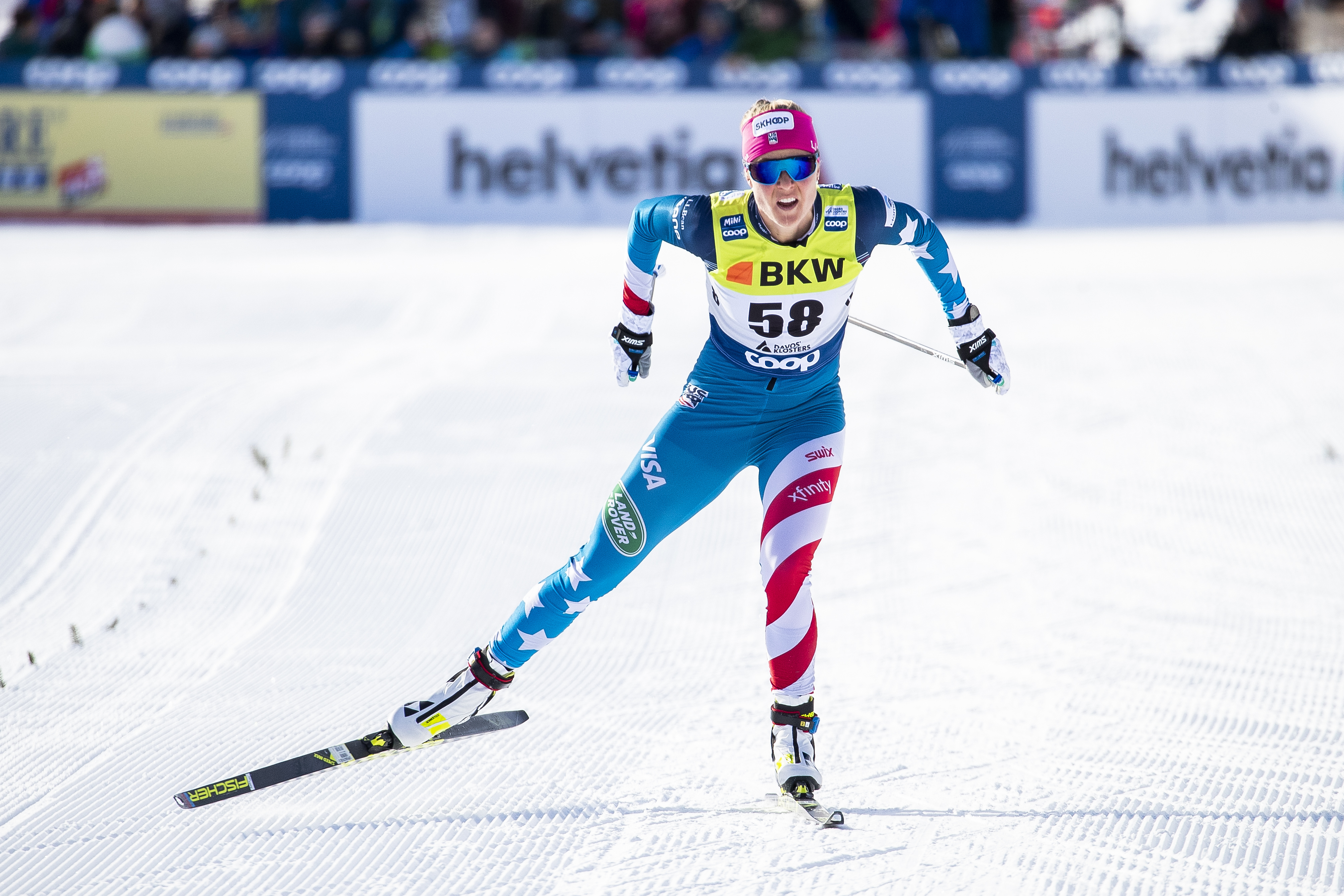 Sadie Maubet Bjornsen gives a final push across the line for a 9th place finish at the 10-kilometer skate race in Davos, Switzerland. (Photo: NordicFocus) 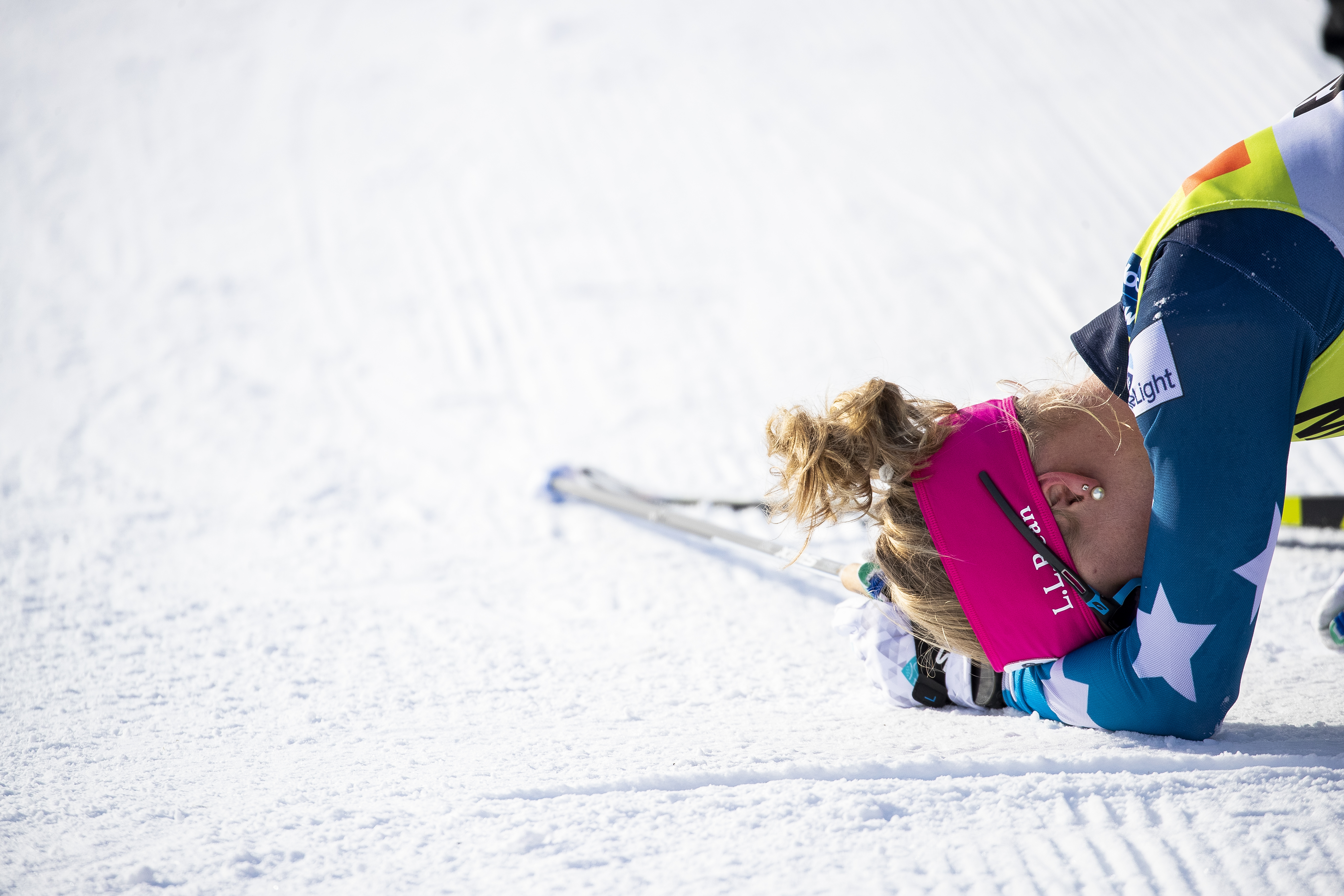 Out of gas, Sadie Maubet Bjornsen gasps for air at the finish of the 10-kilometer skate race in Davos, Switzerland. (Photo: NordicFocus)

Kern moderated her effort in the first lap. The 22-year-old was ranked 48th at the 3 k checkpoint and 42nd at 5 k. By 8 k, she had skyrocketed into 21st, and she continued to chip away on the final descent. 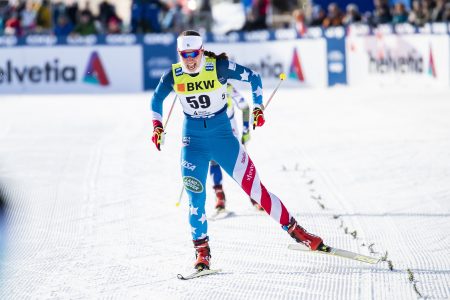 Julia Kern powers over the line for a 19th place finish at the 10-kilometer skate race in Davos, Switzerland. (Photo: NordicFocus)

In her post-race interview, Kern explains that she lucked into a ride from Sweden’s veteran athlete Charlotte Kalla, who pulled Kern along for 7 k then lost to the up-and-comer in a final sprint.

Swirbul, who scored her first World Cup points with a 28th place finish in yesterday’s freestyle sprint, took a more balanced approach and skied well within the points throughout her race. 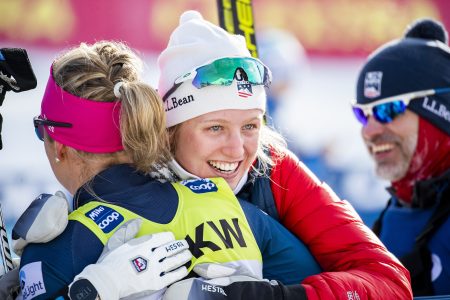 Hailey Swirbul gets a congratulatory hug from Sadie Maubet Bjornsen after placing 21st at the 10-kilometer skate race in Davos, Switzerland. (Photo: NordicFocus)

Growing up in Basalt, Colorado — neighbor to Simi Hamilton and Noah Hoffman’s hometown of Aspen — Swirbul was comfortable racing at altitude and expressed in her post-race interview that her confidence on the World Cup continues to increase as Period 1 wanes.

Frankowski seemed to take the opposite approach. She was ranked 10th at the top of the first long climb at 3 k, 17th at the lap, sliding back to her noteworthy finish position in 23rd. Despite her descending position, she too negative split her race by a few seconds. 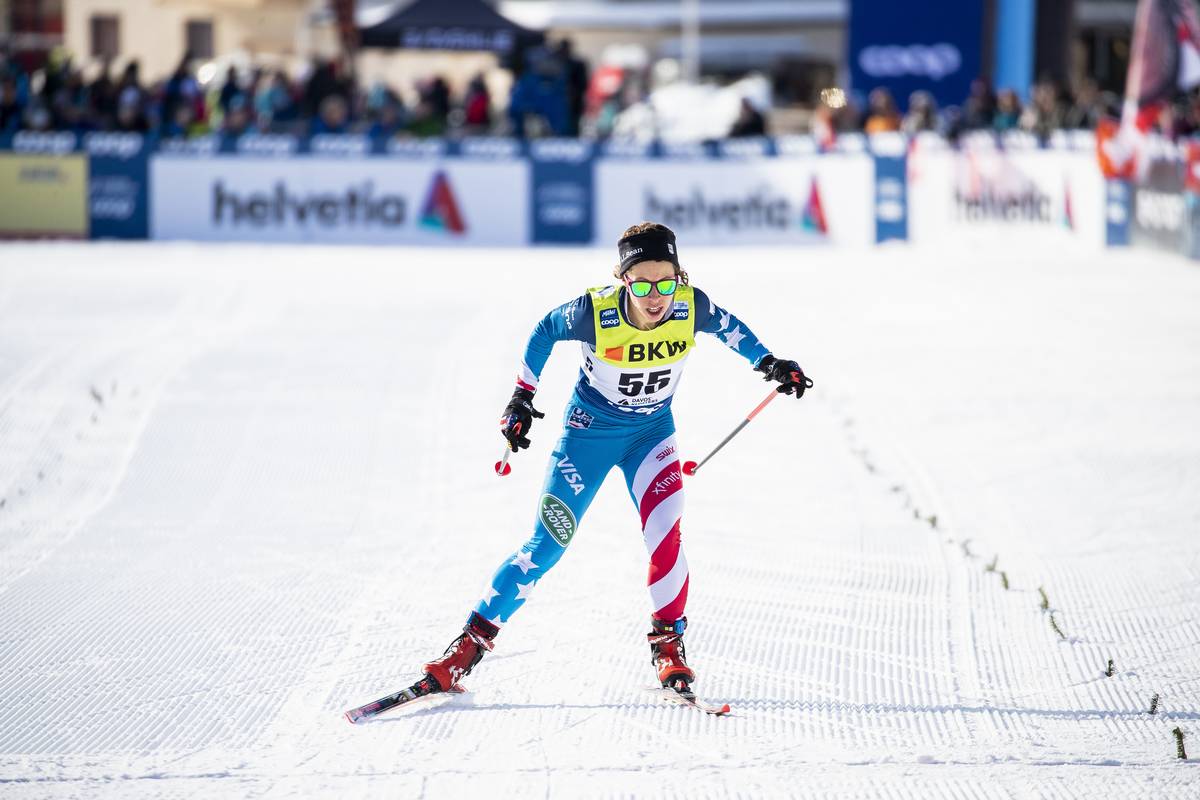 Today was Frankowski’s career-best World Cup finish and the first time inside the top-30 in a non-championship race. The APU athlete finished 24th in the 7.5/7.5 k skiathlon during the Seefeld World Championships and 21st in the 30 k classic in the PyeongChang Olympic Games.

“This was the first time I have scored world cup points, so it is really exciting for me, and a fun way to cap off my first time racing Period 1 of the World Cup before heading back to Minneapolis for Christmas,” emailed Frankowski. “Last week in Lillehammer in the skiathlon I was battling for top 30, and ended up 33rd, so it was fantastic to be inside the top 30 today.
“I love racing in the mountains where the scenery is so pretty, and the sun is out, so I tried to just enjoy the race and look around a bit and enjoy how cool it was to be skiing in a beautiful place. I played my own cards, which is a very fast L3 pace for the first lap, and then tried to use my extra energy up in the second lap. I always struggle with downhill finishes and so I lost quite a bit of time in the final 2k, but I blame it on being a little person, and maybe doing a bit too many speed checks through the S-turn section. Regardless, I had wicked fast skis, awesome coaches and cheerers out there, and Christmas cheer to get me to the finish line.”