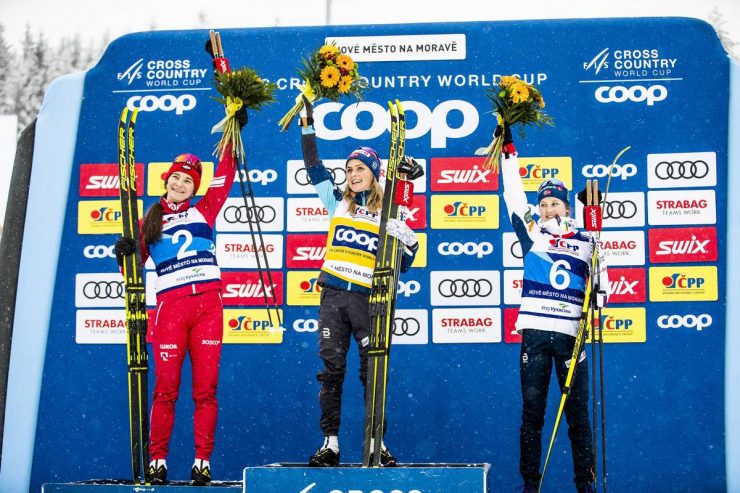 Yesterday’s snow coated Nové Město, Czech Republic, clinging to the tall pines and masking the unsettling contrast of the man made ribbon of snow. Though wintry precipitation continued to fall, cheering crowds filled the stadium, ringing bells and sounding horns as racers passed through.

Picking up where they left off after the skate stage, athletes set out onto the arduous tracks for a 10-kilometer classic pursuit. Steep climbs, sharp curves, and gentler though rippling terrain in between.

Start to finish, Norway’s champion Therese Johaug put on a show. Looking unstoppable, she glided and kicked with rapid tempo, in a race that was hers to lose. Perhaps it was over before it began, as the champion started the race with a lead of 33 seconds over the next skier, Russia’s Natalia Nepryaeva.

But Johaug was not about to wait for her chasers to catch her and leave it to a final sprint. She simply hammered every meter, widening her gap over the field at each checkpoint. By the halfway mark, she was 55.4 seconds ahead, which grew to over a minute by the time she double poled powerfully down the final stretch to stop the clock at 26:49.7. 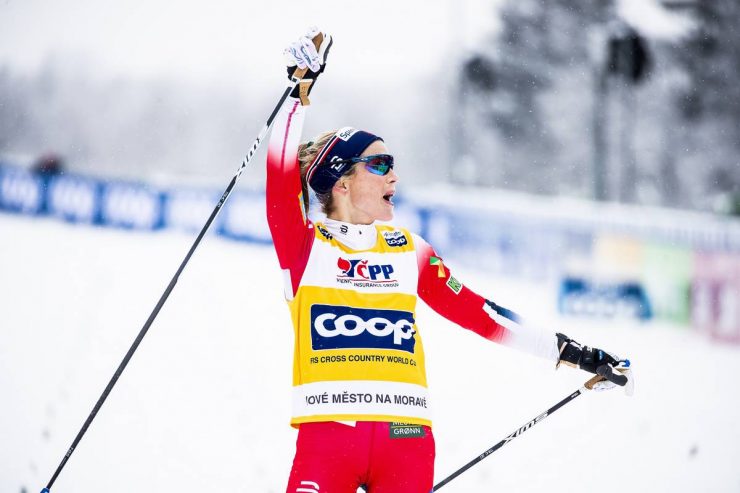 FIS interviewers described it as a “perfect weekend” for Johaug while asking for post-race comments in the mixed zone.

“I’m really happy now,” she said in response. “My shape is really good at the moment, I didn’t know that before we started here in Nové Město. But I think all the competitions in the Tour de Ski and some quiet days at home, I think it’s perfect for me here to come here and race and have this shape.”

Johaug was asked about her “full gas” energy expenditure in a race she so clearly had on lock. She explained that she can’t be complacent in races, as she needs the intensity to maintain her fitness through the season.

“I had my focus on myself today and I want to have a good competition and also a good training sensation, if you understand what I mean. I did not have so many hard sensations after the Tour de Ski, so it’s good to do it here. Of course, I have perfect skis today so the waxers have done a really good job and the tracks here in Nové Město was really good for me, so I’m really happy.” 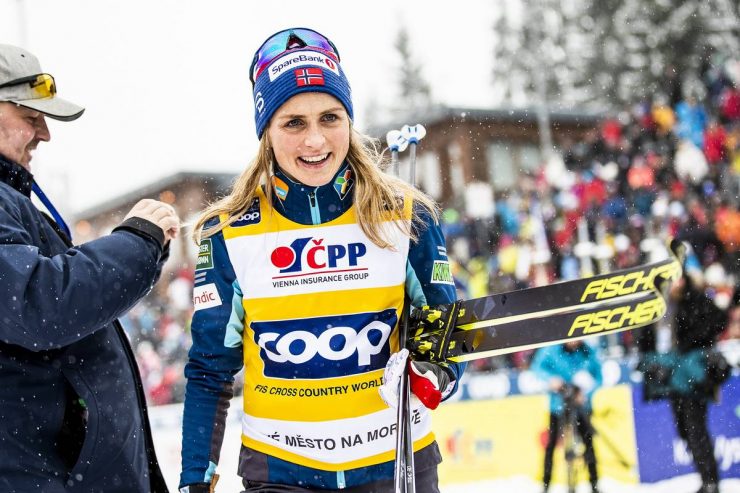 Therese Johaug (NOR) heads for the top spot on the podium in Nové Město. (Photo: NordicFocus)

By 5 k, Weng and Østberg had charged ahead to close the gap to Nepryaeva, and the trio continued together through the second lap. The Norwegian’s took turns leading the charge, while the Russian waited in the draft, matching their attempts to leave her behind. Rolling and poling to the finish, Nepryaeva emerged at the front, leading the Norwegians into the stadium.

Cruising down the final stretch, Nepryeava had a gap of several meters on her chasers, who were side by side double-poling furiously in off-set timing. She held her position to remain in second place in the pursuit (+1:04.8). 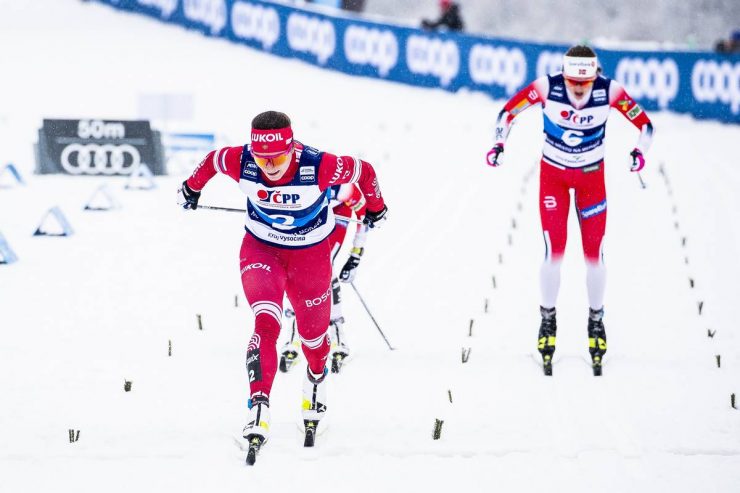 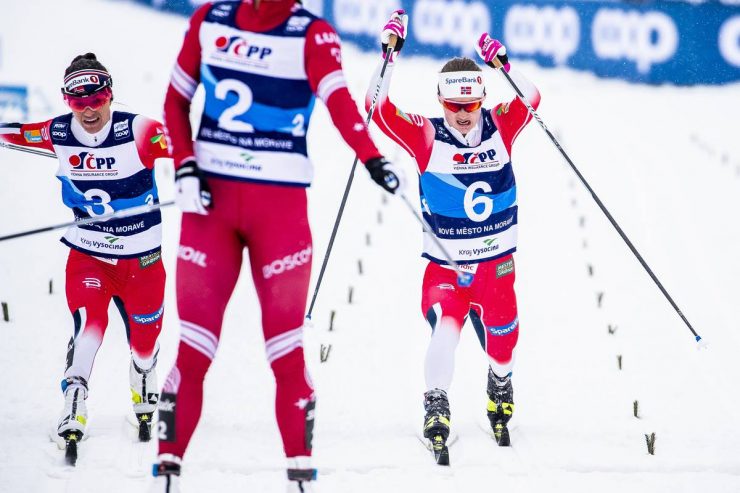 Sprinting down the straightaway, Weng and Østberg looked almost as though they were pumping an old fashioned railcar. Putting in their final strokes, they threw their boots for a photo finish. It was deemed that Østberg had her teammate by millimeters, though the duo were given the same time, +1:06.0 on Johaug.

The next group to the line included Pärmäkoski and Sweden’s Ebba Andersson, who spent much of the race in a pack with Diggins, Haga, Finland’s Kerttu Niskanen, and Czech athlete Katerina Razymova. In the second half, Pärmäkoski and Andersson were able to pull ahead from the other women, sprinting to the line in another photo finish to take 5th and 6th, respectively. 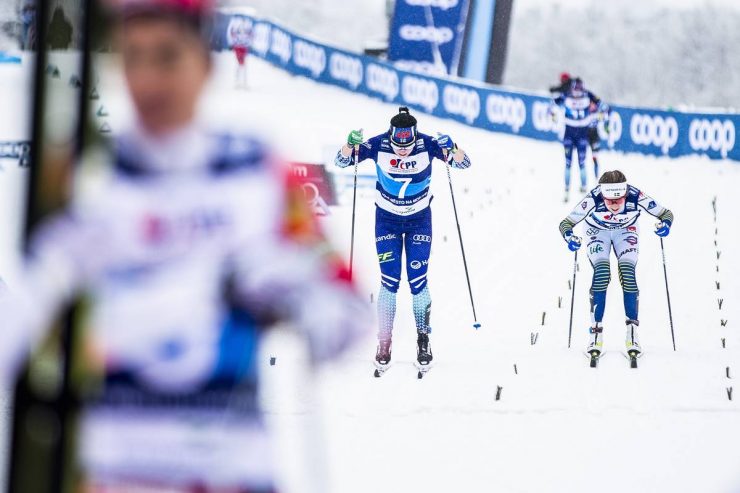 Though fading, Diggins held her position with the remaining women through 7.5 k. She began to fall off the pace, but was fortunate to have a significant gap to the next chaser. Trailing by five seconds in the last kilometer, Diggins brought it home for 10th (+2:12.0).

“I was excited to be starting in a group of really great classic skiers, and I was proud of how hard I pushed the entire race,” Diggins emailed. “It was a really tricky wax day with a wide range of skis, but it was a great step in the right direction for me in terms of classic striding. I focused on staying in the draft to keep up as much as possible on the flat sections and was 100% focused on my technique on the striding parts, because the tracks were breaking down and getting good kick felt different on different parts of the course.” 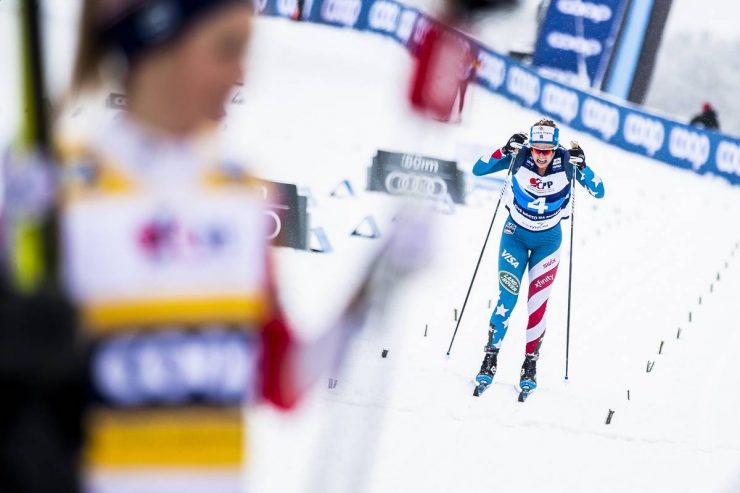 Jessie Diggins pushes to the line in 10th in the 10-kilometer classic pursuit in Nové Město. (Photo: NordicFocus) 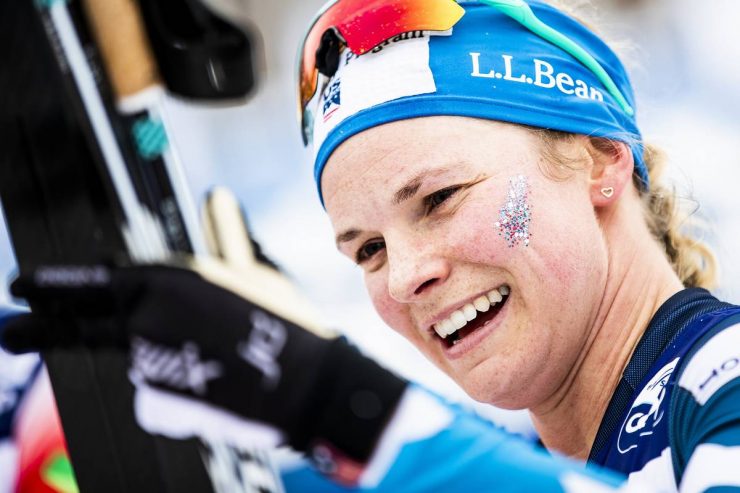 The next American, Rosie Brennan, advanced from her 17th place start position into 13th (+2:35.1). She skied the 12th fastest time on course of the day.

“Today was a much better day for me,” Brennan wrote. “I had much better energy and really enjoyed skiing today. I had a really solid group that I started with and we stuck together throughout the race picking people off in front of us. The snow held up a little better today so it wasn’t quite as tricky as yesterday and I was thankful for that! I feel good that my energy is coming around after the tour and things are headed in a good direction.” 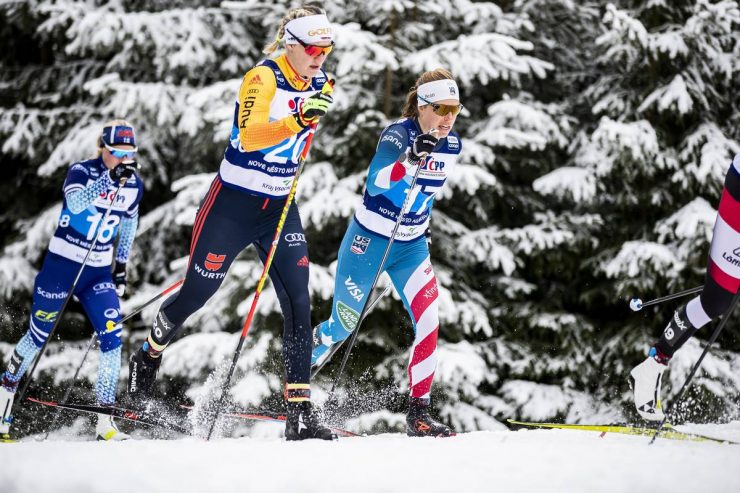 Tucked in with a group, Rosie Brennan skis the 12th fastest time of day in Nové Město. (Photo: NordicFocus)

“It was a redeeming day of ski racing after a really tough day yesterday,” wrote Maubet Bjornsen. “Recovering from the tour is a challenge of its own. Balancing the excitement of the experience with the fatigue is never easy. I managed to catch a cold post tour, and thought I had done a good enough job of resting, but I think I got a hair excited, which left me feeling flatter than I would have hoped yesterday. That combined with challenging conditions made for a perfect storm of imperfection yesterday.

“An ice tub, a night of sleep, and as much mental positivity as possible left me in a better place today! I would have loved to have been skiing with one of the front groups today, because I felt I had the strength to hang on, but instead, I worked my way through some girls, and tried my best to catch the group working together in front of me. It was a hefty mission on my own, but I feel really good about that way my body came around.

“My plan is to take a bit more rest, and then just participate in the sprint race next weekend in Obertsdorf, Germany. When I love racing as much as I do, it can be easy to just keep charging on, and forget to plan ahead. There is another tour event coming in hot, so I will take this opportunity to make sure I am fully recovered, and stronger than ever coming into the next period of racing.” 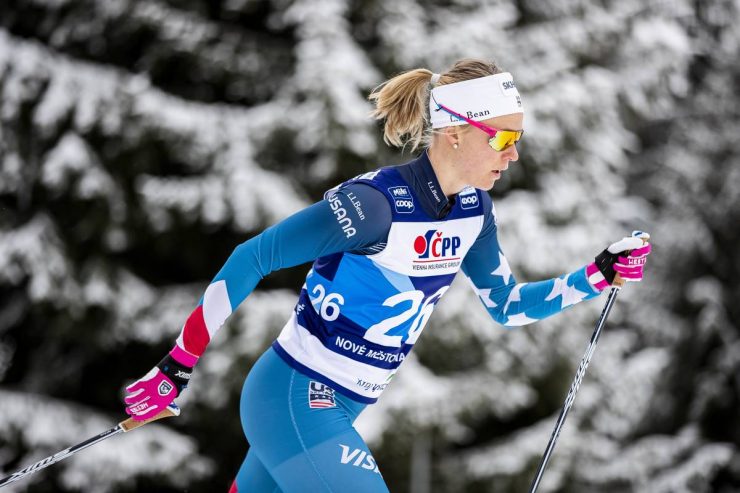 In a post-race call, Grover provided insight into how the athletes perceived their races and the opportunities each had to ski in group. In particular, this tactic supported Brennan and Bjornsen as they chipped away at the women ahead of them. (Please excuse the echo.)

Post-race interview with Chris Grover on the womens’ performance. 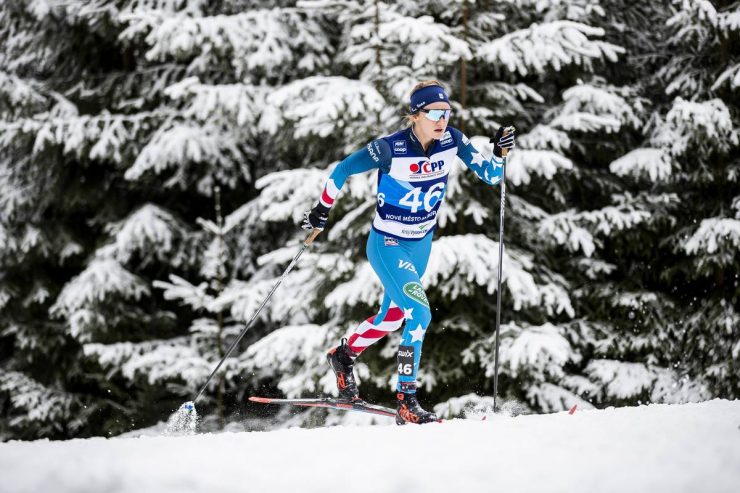 Alayna Sonnesyn strides it out in her second round of World Cup starts in Nové Město. (Photo: NordicFocus)

Reflecting on overall takeaways from the weekend, Grover acknowledged that the first set of distance races after the Tour de Ski can reflect the cumulative toll of the event. Some athletes may need additional recovery to regain form.

Post-race interview with Chris Grover regarding takeaways from Nové Město.

Racing continues next week in Oberstdorf, Germany with a 7.5 k/7.5 k skiathlon and classic sprint.