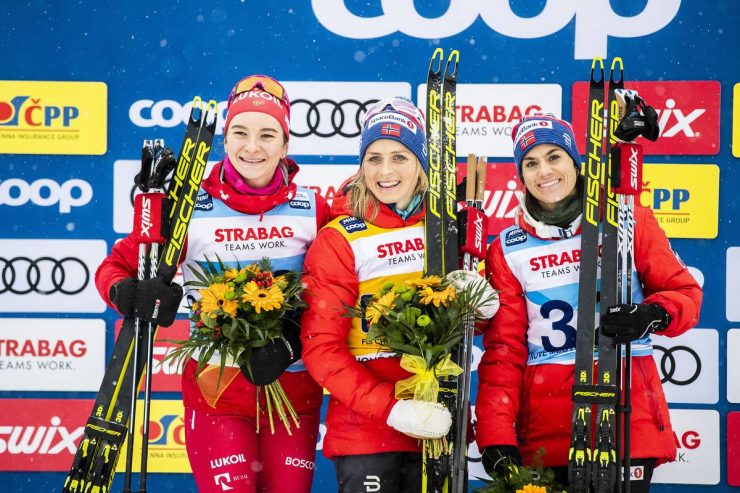 The women’s podium inNové Město. Therese Johaug (NOR) took the win ahead of Natalia Nepryaeva (RUS) and Heidi Weng (NOR). (Photo: NordicFocus)

“It has everything,” Sweden’s Charlotte Kalla told FIS before the start of the 10-kilometer interval start skate in Nové Město, Czech Republic. Though she was describing the steep uphills and working downhills, found along the 5 k track, it might have also been an apt description for what the weather had in store. As athletes headed out on course, the light icy precipitation transitioned into chunky white flakes accumulating on the deteriorating ribbon of man made and farmed snow.

The two distance stages in Nové Město mark the start of Period III and the midpoint of the World Cup season, the tenth and eleventh of twenty one races. It also marks the return of the the squads of distance athletes who sat out last weekend’s city sprints in Dresden, Germany to recover from the compounding effect of their efforts in the Tour de Ski (TDS). Who made it through unscathed and who begins the second half of the season with lingering fatigue? Nothing like a two-day pursuit to find out.

By 3 k, it was evident that Norway’s Therese Johaug, Tour de Ski winner and leader of both the World Cup overall and distance standings, was feeling on form. From the start, she unleashed her usual high tempo attack, clocking the fastest splits at each checkpoint. She stopped the clock at 23:31.1, over 30 seconds ahead of the next fastest time. 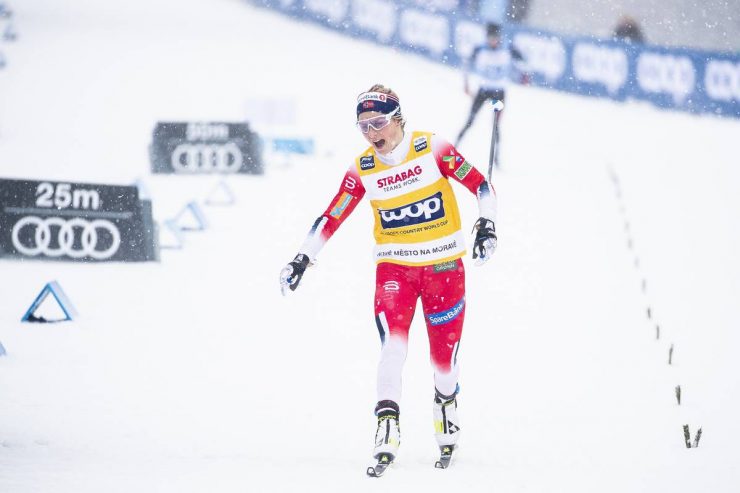 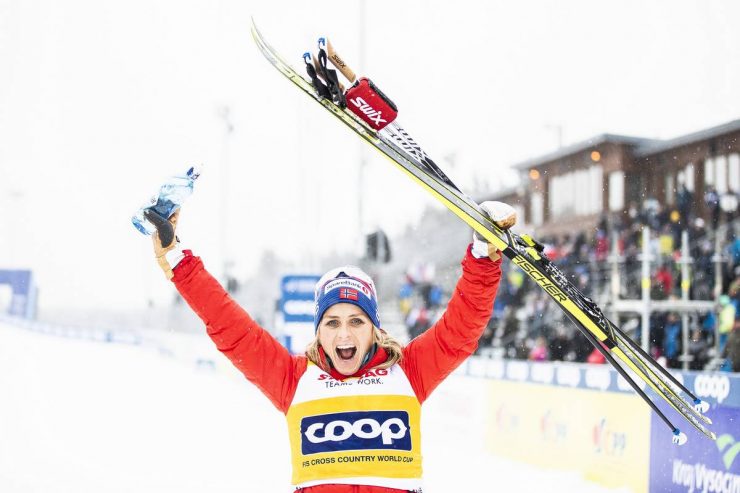 “It was an amazing race today,” Johaug told FIS at the finish. “My shape and my body was really good. I have been a little bit tired after the Tour de Ski and I had some good sensation and bad sensations, but today it was a good day. Of course, the tracks out here and the snow was perfect for me, so I am really happy.”

Johaug was chasing the ghost of her teammate, Heidi Weng, who started two bibs prior at the front of the seeded group. Leading the race for second place, Weng time-trialed through the wooded course, setting splits that were just faster than her peers’. At the half, she trailed Johaug by 17 seconds with four women within ten seconds of her: Natalia Nepryaeva of Russia, Moa Lundgren of Sweden, Jessie Diggins, and Ingvild Flugstad Østberg of Norway. 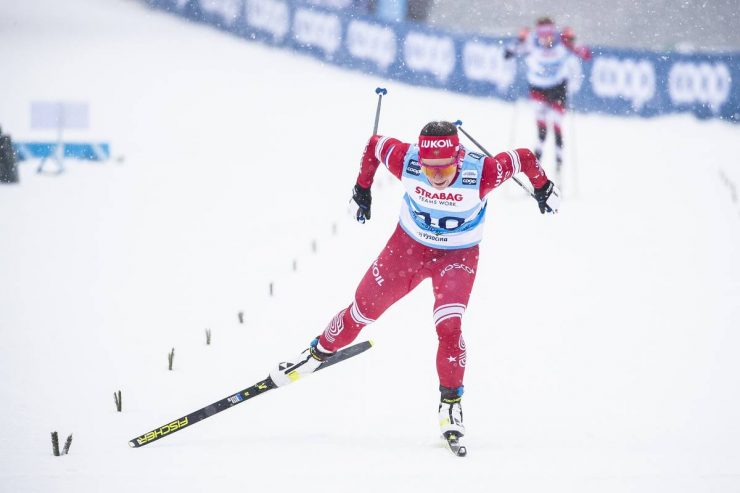 During the second lap, Nepryaeva closed the gap to Weng’s times, matching her with roughly two K’s to go, then pulling ahead by a few seconds. Throwing her boot for the second fastest time of the day, she knocked Weng back to third on the podium. Nepryaeva finished 32.7 seconds behind Johaug, and Weng was 40.3 seconds back.

Weng is now batting 70 percent for podium finishes; she has only missed the top-3 in three of the ten stages, with her lowest rank of 8th occurring in the final stage of the Tour de Ski. 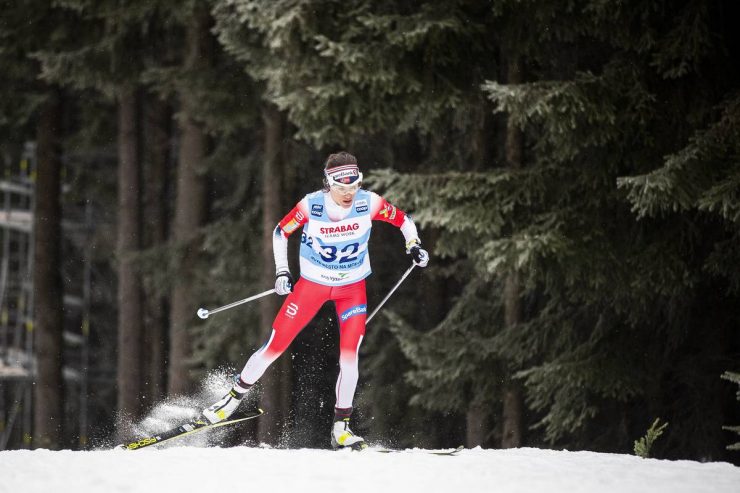 Eyes locked on the task at hand, Heidi Weng skis to third during the 10-kilometer skate in Nové Město, Czech Republic. (Photo: NordicFocus)

Diggins started third in the seeded group behind Johaug and Weng. After hovering in the top 5 throughout the race, she was next across the line in fourth (+48.5), with Ragnhild Haga of Norway just behind (+48.8). Østberg rounded out the final spot in the top five (+49.7). 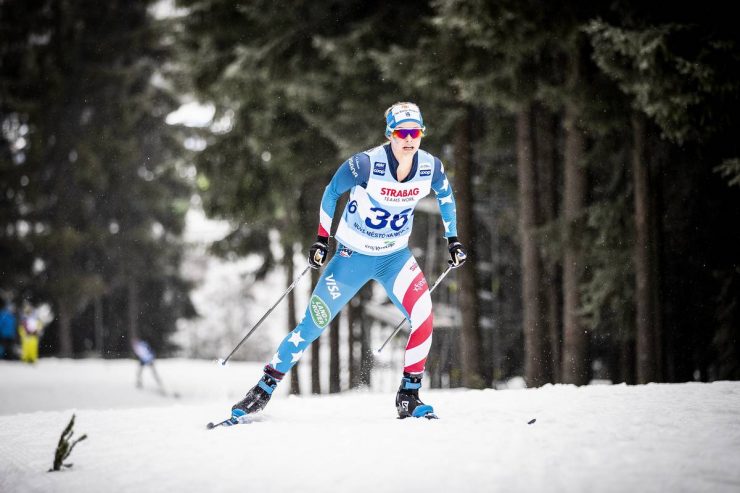 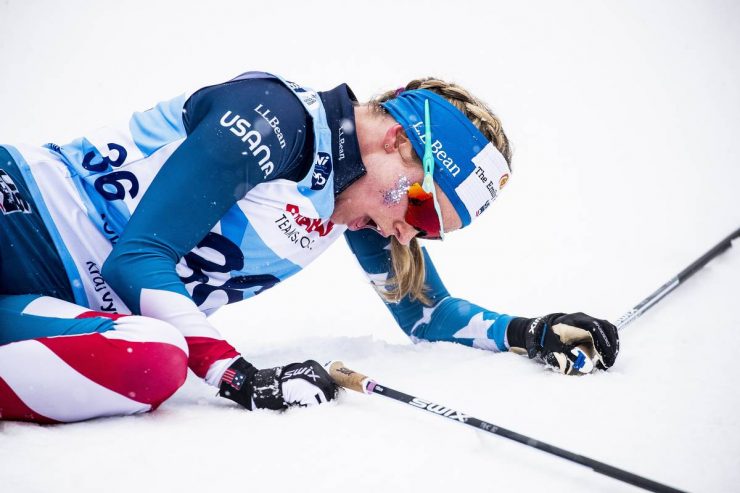 Jessie Diggins gasps for air after taking 4th in the first stage of the distance pursuit Nové Město. (Photo: NordicFocus)

When asked for a preview of tomorrow’s pursuit, Johaug commented on this strong group of women who would be chasing her.

“Of course, I’m really happy that I have 30 seconds, but I know that it’s a big group behind me and they can do work together and I’m going to be in the front alone,” Johaug said. “I have to work hard to have the first position in the finish, but I will do my best and we will see tomorrow how it ends.” 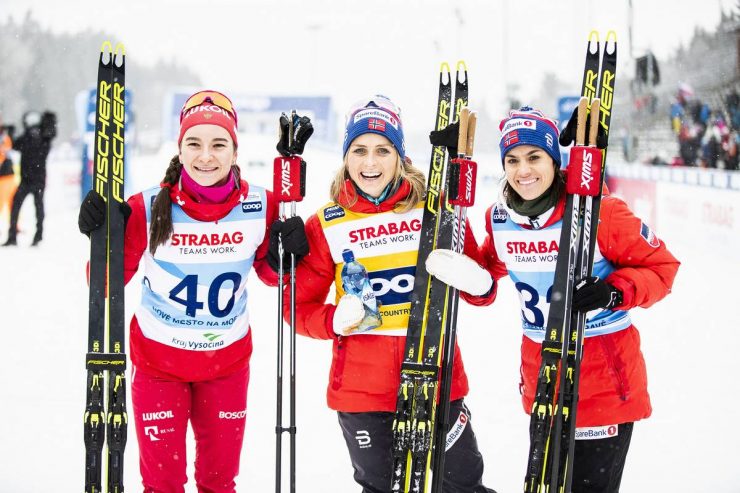 The women of Nové Město. Therese Johaug (NOR) led the day, followed by Natalia Nepryaeva (RUS) and Heidi Weng (NOR). (Photo: NordicFocus)

Due to poor WiFi connection, Diggins chose to share her post-race comments via email.

“Today was a good race for me, although it was kind of funny because with the super deep, sugary snow, it never felt like I was moving very fast, especially stepping through the sugar on the uphills! But overall I’m happy with where my body is after the Tour de Ski, and I’m working on training as smart as I can to find that balance between racing and training hard and finding good recovery after such a big effort.”

After today’s result, Diggins is ranked third in the World Cup distance standings behind Johaug and Weng. She is ranked 5th in the overall standings. Diggins commented on how this plays into her tactics in the second half of the season. 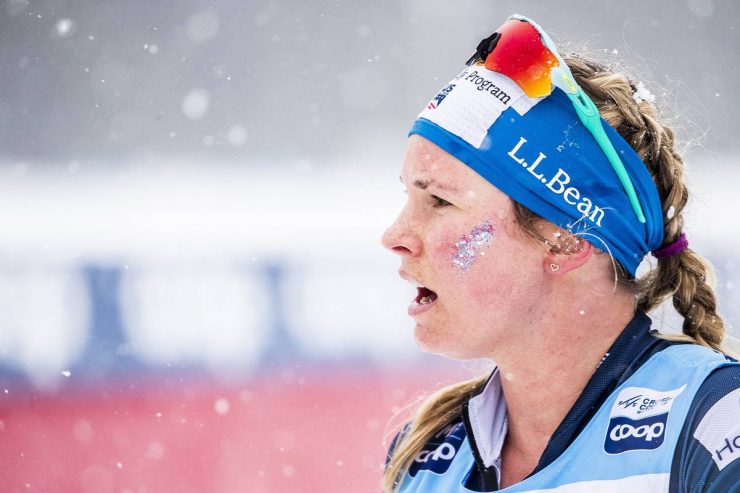 “In terms of overall ranking, there isn’t really a plan because it’s out of my control – as we saw during the TDS, a few tough waxing days can make a huge difference, and you obviously have no control over how other athletes are performing. With that in mind, I don’t worry about the overall and instead focus on making every race I do a complete effort, training and racing it to the best of my ability, only worrying about the things I can control like my race effort, technique and pacing. If I can do that well, then it sets me up as best I can for the overall.”

After the Tour, Diggins headed to the Dachstein glacier in Austria, where she was joined by her boyfriend, Wade, for a block of recovery and training.

“My post-TDS training camp was really awesome, and I felt so lucky to have my boyfriend there with me! It’s very important to me to find a healthy life/skiing balance, in order to be happy and want to continue racing on the road for years to come. So my main focus during that time was simply happiness, as well as quality rest and recovery after the huge effort of the Tour.”

“I had great skis today and I’m very thankful to our hardworking staff! Tomorrow should be an exciting pursuit start and I’m excited to ski with so many speedy ladies.” 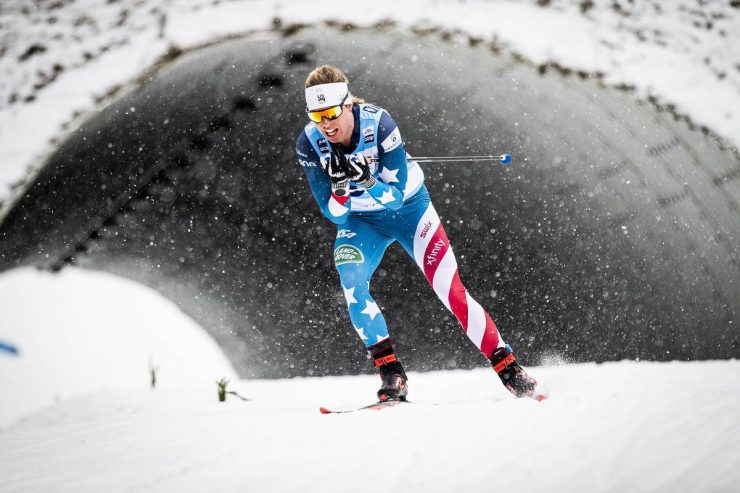 “We faced some challenging conditions today,” Brennan emailed to several news outlets. “With no [natural] snow on the ground, the course was made up of all man made or saved snow, which didn’t adhere well to itself so it was deep, sugary, and dirty. The course was challenging in the sense of the amount of transitional skiing.  I wasn’t sure how I would feel after the Tour de Ski but tried to stay optimistic that my break was good and I would be back where I left off. I started well and was happy with my first lap. I faded much more than I had hoped in the end and think I am still feeling a bit of fatigue from the Tour. Overall, it was a solid day and I hope I can find another gear tomorrow.” 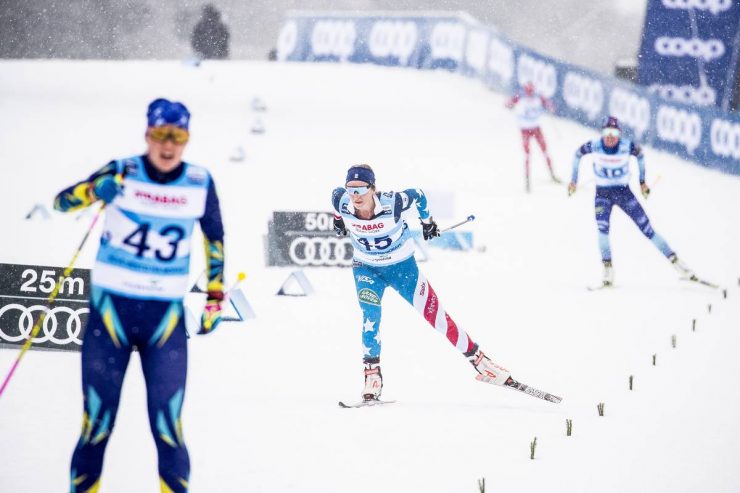 “I’m really happy with my race today,” Sonnesyn emailed about her race. “I feel like I skied well and was consistent through the whole thing. I think I will learn a lot each day and hope to keep improving in the next few weeks!”

New to this level, Sonnesyn begins her second set of World Cup starts, which she earned from her position as SuperTour points leader. Her first World Cup starts took place at the World Cup finals last spring in Quebec City, where a string of bad luck kept her from performing at her potential: illness, followed by three crashes and two broken poles, resulting in a DFL — “dead freaking last.”

“I was really excited about those starts [in Quebec City], but by mid-March I had traveled around the world (literally, I went from the Birkie to China to Germany and back to the US) all in about 2 weeks and I was totally wiped,” Sonnesyn explained. “I knew I didn’t have the kind of energy to have races that I was truly capable of but I still wanted to start them to gain that experience.

“This year, I was slightly more comfortable showing up at a World Cup race and didn’t have to waste a ton of energy fan girling (too hard),” she wrote with a wink. “That being said, the field is so deep here and going into the race I wanted to focus on my own skiing, without worrying about results. That’s the really nice thing about being SuperTour leader right now; I didn’t need to “prove myself” in this first race. I have six races over 4 weeks to grow accustomed to racing at this high level and hopefully keep building on a race like today.

In a post-race call, Chris Grover shared additional insights into the womens’ performances, including how Maubet Bjornsen is feeling after the Tour de Ski, and Patterson and Sonnesyn’s results fresh off the plane.