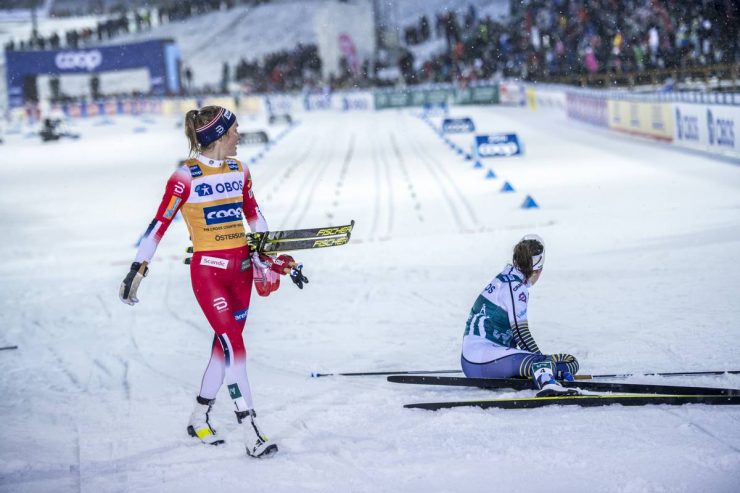 Therese Johaug (yellow bib) with enough time at the finish to gather skis and watch 2nd, 3rd, and 4th come across the line. (NordicFocus)

The early evening show, under the lights of Östersund, Sweden’s ski stadium, Stage 2 of the Ski Tour 2020 – a 10-kilometer classic pursuit – got underway as the plentiful moisture falling from the sky transitioned from steady rain to big snowflakes.

This was a 10 k race with three discrete tales. First, the story with the least tension.

That would be Norway’s Therese Johuag’s 10 k effort. Which, despite the pursuit format, was a solo time trial affair. She set herself up for that narrative by winning Stage 1’s 10 k individual skate by 45.6 seconds. No skier on the World Cup could fathom closing that gap to a generational distance skier.

Johaug won in 27:29.0 minutes. Her effort gained her even more time in the Ski Tour overall as teammates Heidi Weng placed second (+57.4), and Ingvild Flugstad Østberg third (+57.8). Sweden’s Ebba Andersson lost out on third in the closing meters, as she placed fourth (+58.6). 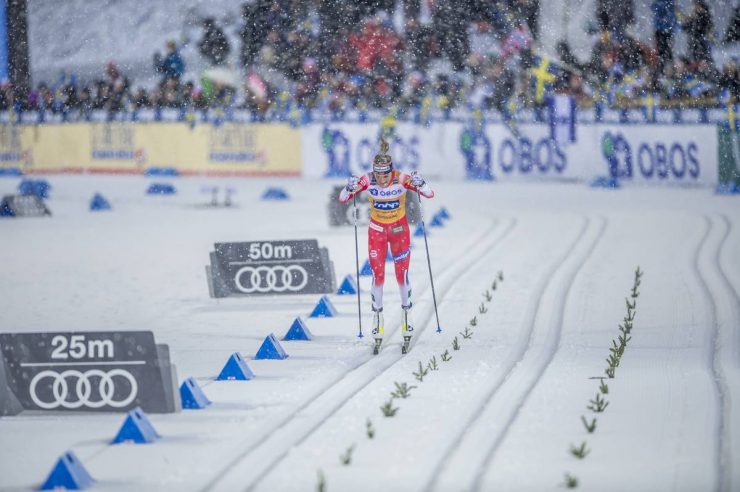 Let’s be frank: with a 45.6 second lead on the second starter Weng, 47.3 seconds on Østberg in bib 3, and 53.1 ticks ahead of Andersson in bib 4, this was as much a sure thing as sunrise and sunset. 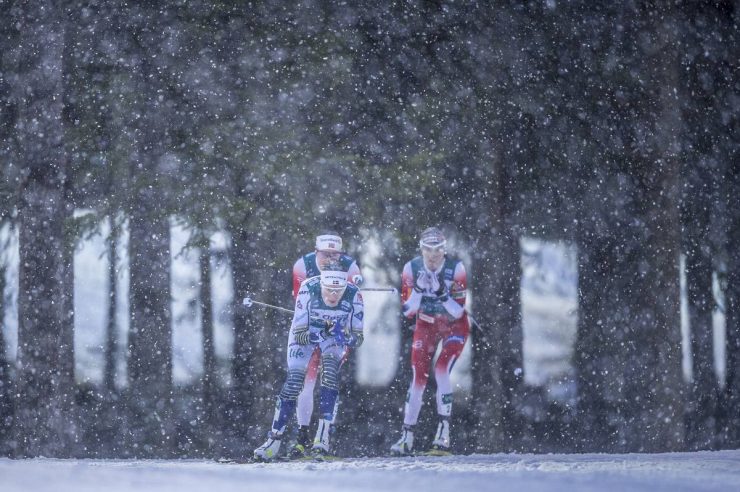 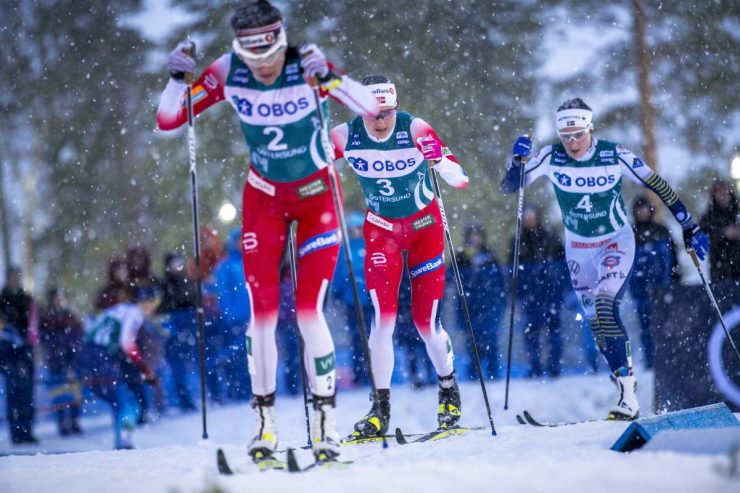 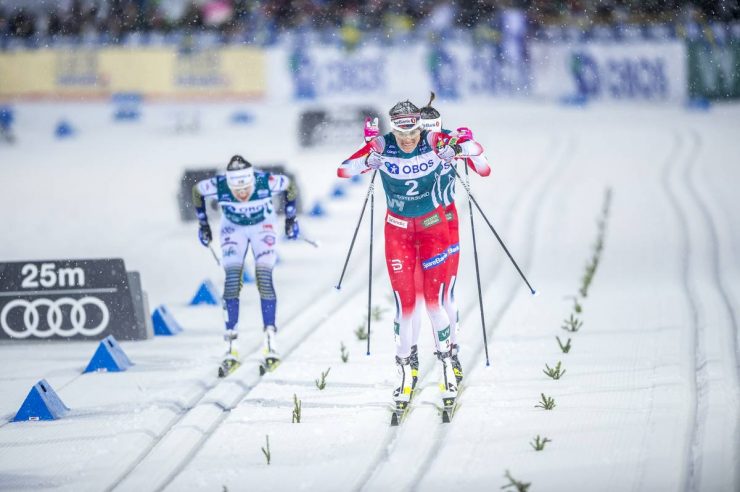 Weng led the charge into the final straight.  Østberg slotted in behind Weng using her as a double-poling pace machine. Weng and Østberg gained a precious few meters on Andersson to take second and third, respectively.

Johaug leads the Ski Tour 2020 after two stages with a total time of 49:18. Weng is second at 0:57, and Østberg is third overall with the same time back. Andersson sits one second further back in fourth overall.

The race behind the top-four had a different vibe. It was less about fending off a potential chase, and more about how a large group of skiers would coalesce, who would lead, and who would sit back and take advantage of the more skied in tracks. 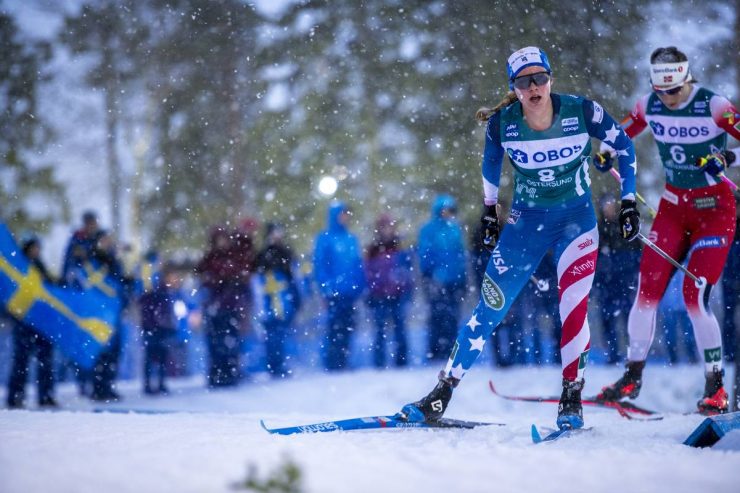 American Jessie Diggins, in bib 8, pulled the group through the 3.3 k mark 1:25.2 behind Johaug. In contact with Diggins, and coming through in this order were Astrid Uhrenholdt Jacobsen, Ragnhild Haga, Rosie Brennan, Krista Pärmäkoski, Frida Karlsson, and Natalia Nepryaeva. The group from fifth to Austria’s Therese Stadlober in 16th place was separated by 11 seconds.

Brennan took her turn up front though the 4.9 k mark, as did Karlsson later in the race. By the finish, the collective group did not gain time on those ahead, they ceded a few more seconds to the top four. But we would be remiss to make note of Brennan’s determination. You could see it in yesterday’s 10 k skate, and it was evident today; she’s got moxie and now the confidence to take pulls, as she did with Karlsson today, and try to break the pack. In a post-race interview (audio posted below), Brennan noted she had in fact been keen on making a move during the pursuit. 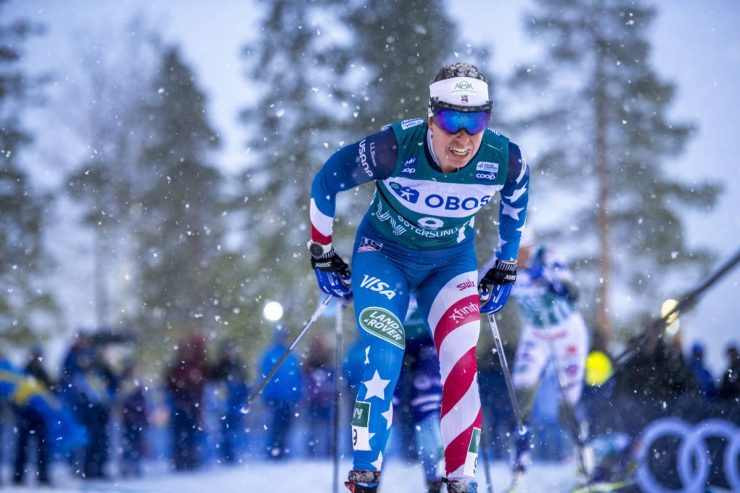 “It was a pretty crazy day out there!” Diggins wrote. “I was actually super stoked about the rain while warming up because klister skiing in the rain is such amazing kick and really fun getting up all the hills on. The snow right before the start made it a really strange race because the one track became exponentially faster as it got skied in, which led to massive packs (for a girls race, anyway) forming. Huge thanks to the tech team because my skis stayed competitive and were kicking well even in the rapidly changing conditions!

“I’m excited for the rest of the tour – the next two races are formats we’ve never done before, so I’m ready to go give it my very best shot!”

“After recovering from a mild tummy bug or a form of food poisoning that visited the night before the start of this tour, I am feeling thankful and hopeful after the second stage of the tour today,” Maubet Bjornsen emailed. “With a snow/rain downpour, I was feeling right at home strapping classic skis on my feet and heading out in the misery. I have spent plenty of days in this exact condition during summer training up on Eagle Glacier, so I was trying to channel every bit of internal strength I could find. The fact that I was able to work my way up to 19th today, and had encouraging feelings in a somewhat depleted version of myself is something I will take and run with!

“I am excited to have a day to recover and fill up my tank, and take on this tour in the same way I did the last. An imperfect start will just fuel me with the extra fight for the days to come!
“Thanks to the tech team for putting wonderful skis together given the absolute craziness coming out of the sky!”

In speaking to U.S. World Cup Head Coach Matt Whitcomb after the race, he explained that skiers in the back of the field were able to take advantage of the considerably faster skied in tracks. Again, heavy wet snow fell during the race. 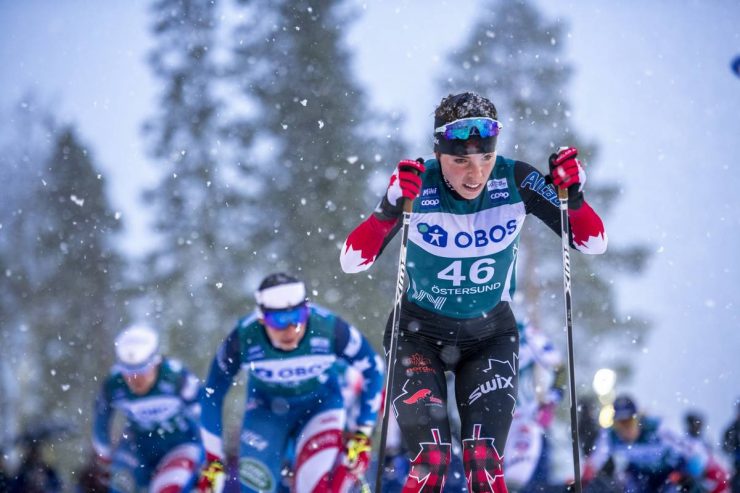 Katherine Stewart-Jones (CAN) during Stage 2 of the Ski Tour 2020. (Photo: NordicFocus)

As far as the overall standings and how times are calculated, time of day is used to determine a skier’s time for Stage 2.