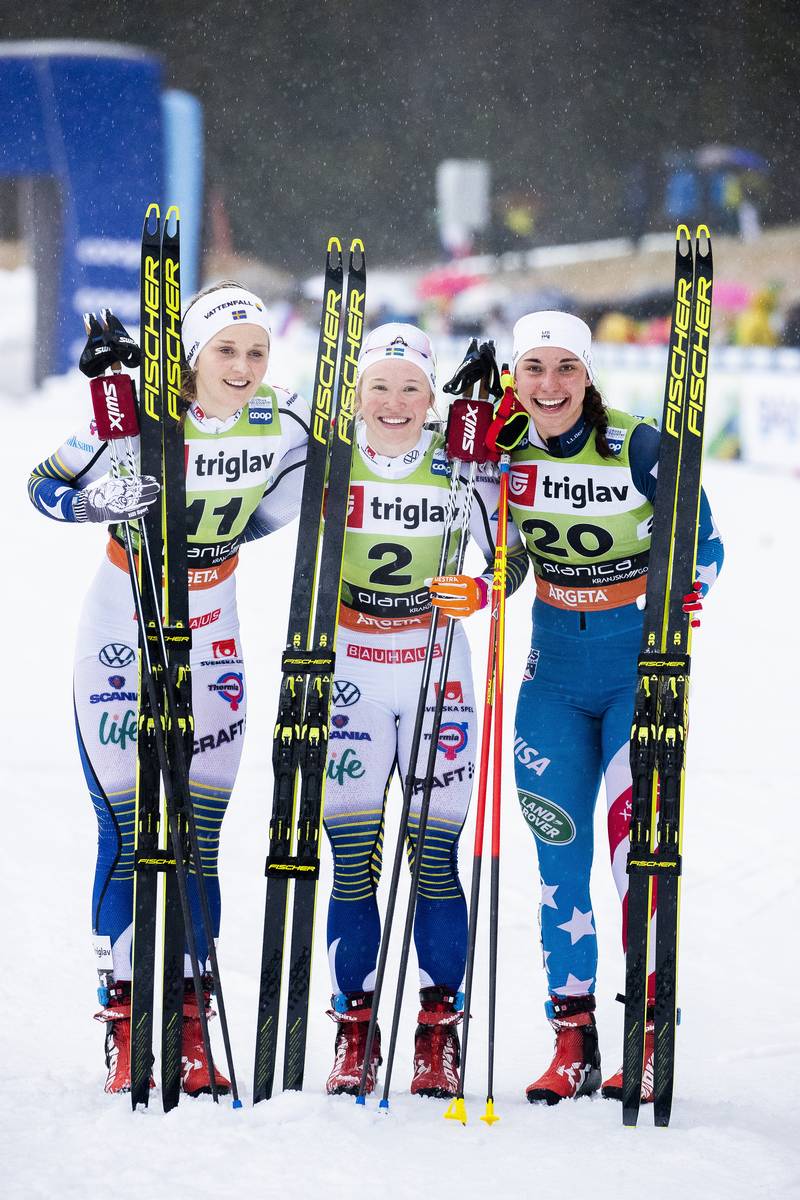 Temperatures over 40 degrees Fahrenheit, steady rain that peppered camera lenses, sparse broods of fans huddled under umbrellas, and a ribbon of white farmed snow. After a wintery start to the season in snowy Ruka, Lillehammer, and Davos, athlete’s found their spring-like gear racing the 1.2-kilometer freestyle sprint in Planica, Slovenia. With many “all-arounders” choosing to sit out the sprint focused weekend to rest for the upcoming Tour de Ski, the intimate subset of athletes contained many of the World Cup’s top short track athletes.

The profile of the 1.2-kilometer sprint course in Planica, Slovenia. (Photo: Screeshot FIS)

Last week’s podium finisher Sophie Caldwell was the fifth fastest qualifier, 0.56 seconds behind top finisher Laurien van der Graaff of Switzerland. Caldwell faced off with Jonna Sundling of Sweden in the first heat of the quarter-finals, leading their peers through a smooth heat and crossing the line 0.03 seconds apart with Sweden in front. 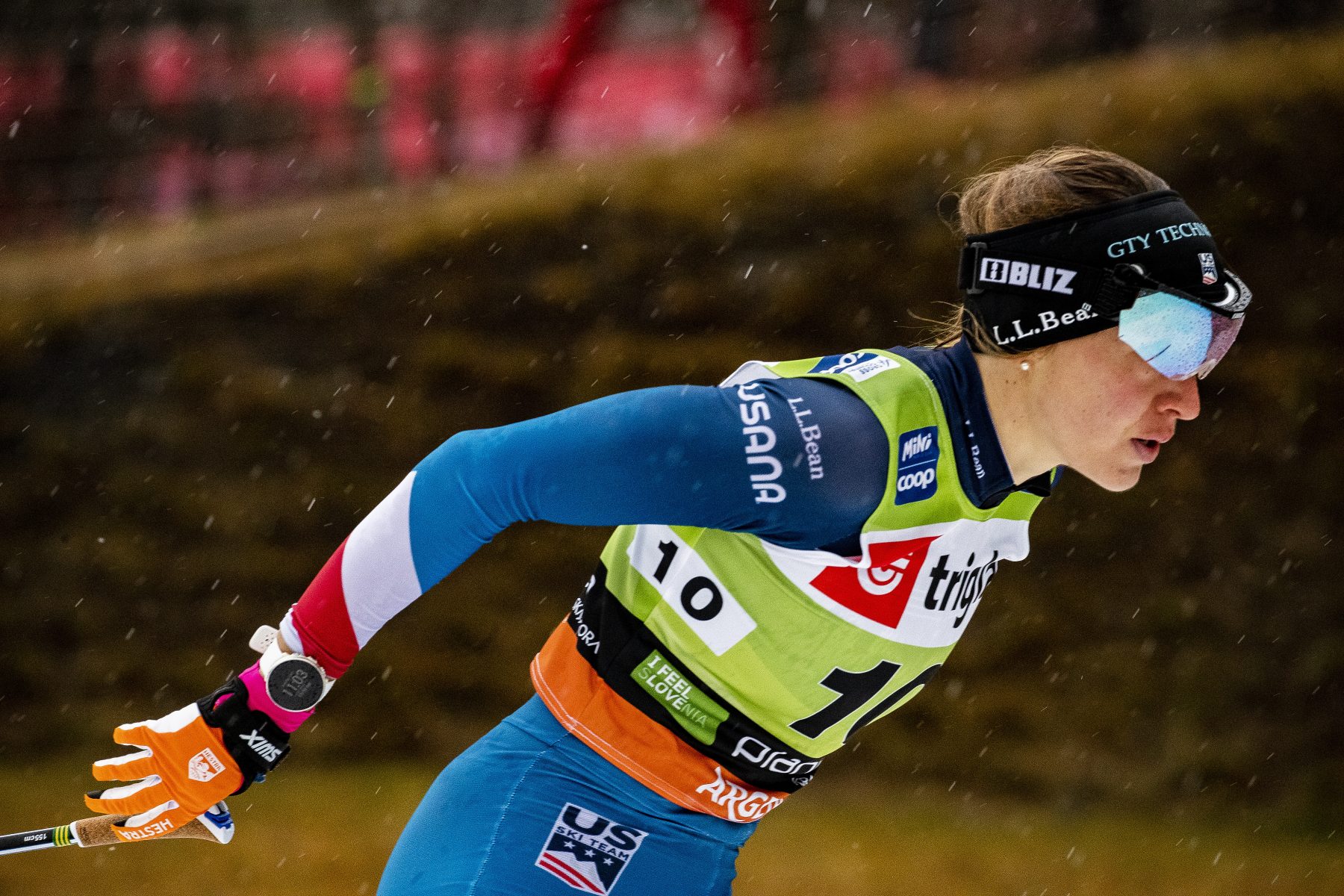 All focus, Sophie Caldwell flies to a fifth place result in qualification during the 1.2-kilometer freestyle sprint in Planica, Slovenia. (Photo: NordicFocus) 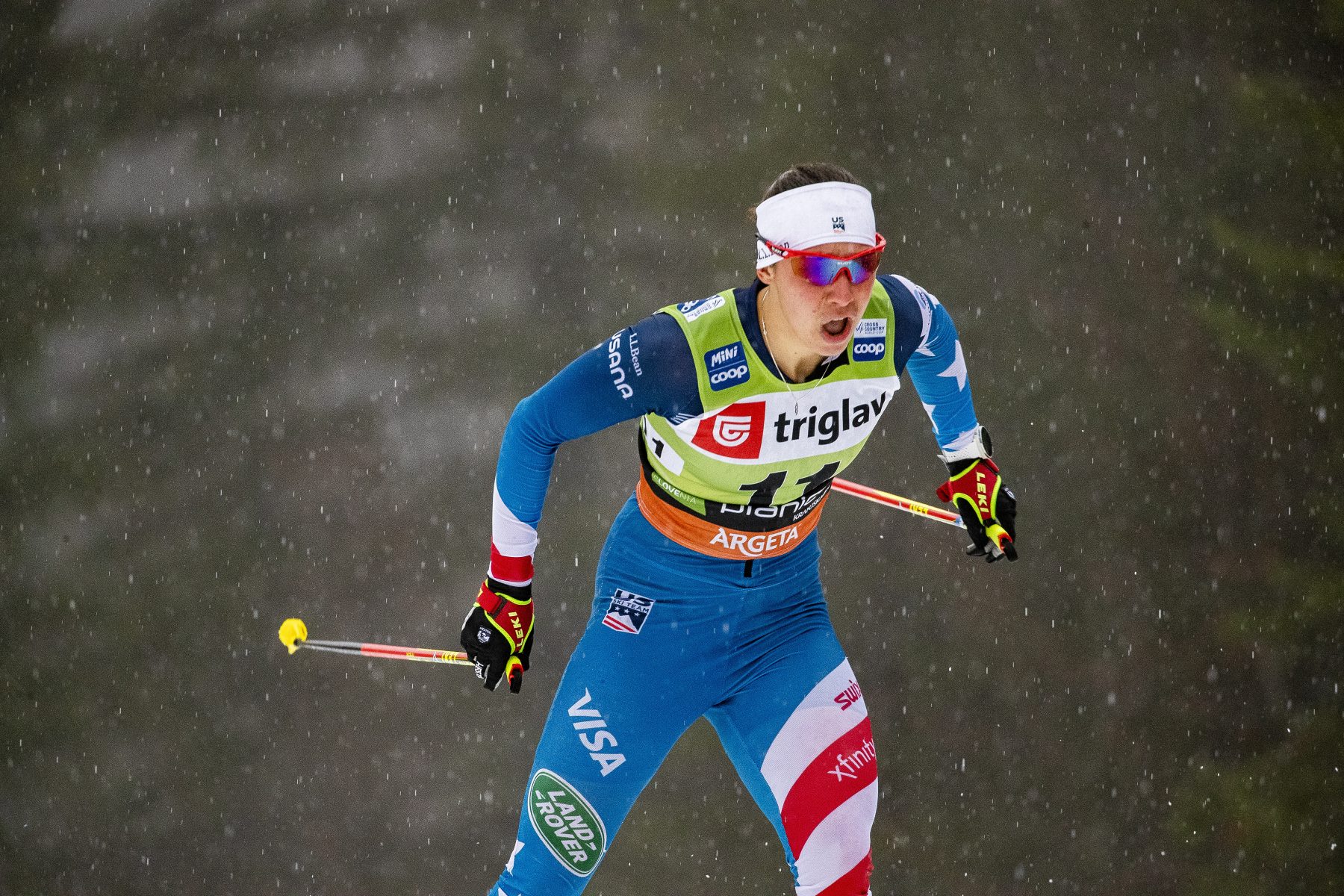 Julia Kern crests a hill on her way to a 20th place result in qualification. (Photo: NordicFocus)

Continuing to make a statement that she belongs with the sharp end of the field, Julia Kern qualified in 20th and raced in the fifth heat of the quarter-finals where six unique countries were represented.

After a conservative start, Kern was tucked at the back of the pack at the halfway mark of her quarterfinal, out of trouble when Czech athlete Theresa Beranova lost control on a fast corner and slid off the track. With a high-tempo fury, she surged around the left side at the start of the climb at the 500 meter mark to take control for the second half of the race with Maja Dahlqvist of Sweden.

Attacking on the climb with 200 meters to go, Kern surged again. Her tempo was matched by the Swede’s until Dahlqvist suddenly caught an edge and fell to the ground. Peerless, Kern flew to the finish line, her braid whipping back and forth with each powerful V2 push.

In the semi’s, Caldwell faced a pack of three Swedes, Sundling, last week’s surprise champion Linn Svahn, and 2019 sprint crystal globe winner Stina Nilsson. Also in the first heat was Norway’s top sprinter Maiken Caspersen Falla and Ane Appelkvist Stenseth. Rounding a fast turn, Falla stepped on the tip of Stenseth’s ski and the two tangled to the ground, now out of contention. Caldwell skied to third in the heat, crossing the line in a close finish with Sundling and Svahn. Her time was fast enough to secure a lucky loser spot in the final.

In her semifinal, Kern tucked into the middle of the pack, matching Anamarija Lampic of Slovenia and Johanna Hagstrӧm of Sweden. Repeating the power move that worked in the quarter, Kern seized her opportunity to surge to the front on the climb, maintaining her position over the crest of the hill and down the straight away to the finish solidifying her first spot in a World Cup final. Lampic finished second in the heat (+0.57).

Three Swedes, two Americans, and one Slovenian in the final. 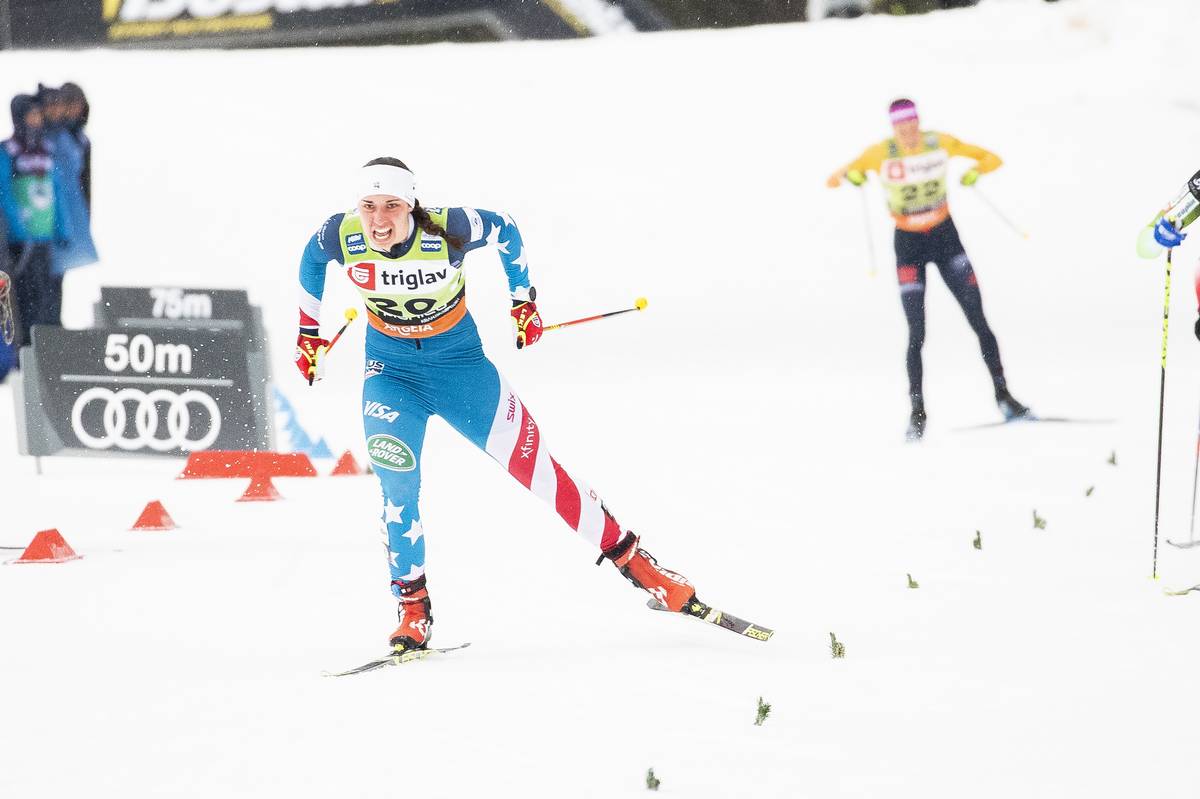 Julia Kern locks eyes on the finish as wins her semi-final heat of the 1.2-kilometer freestyle sprint in Planica, Slovenia. (Photo: NordicFocus)

Racing in front of her home crowd, Lampic took an early lead in the final, tailed closely by her competitors. Just before halfway, Nilsson and Sundling took control on the climb with the Americans following closely. 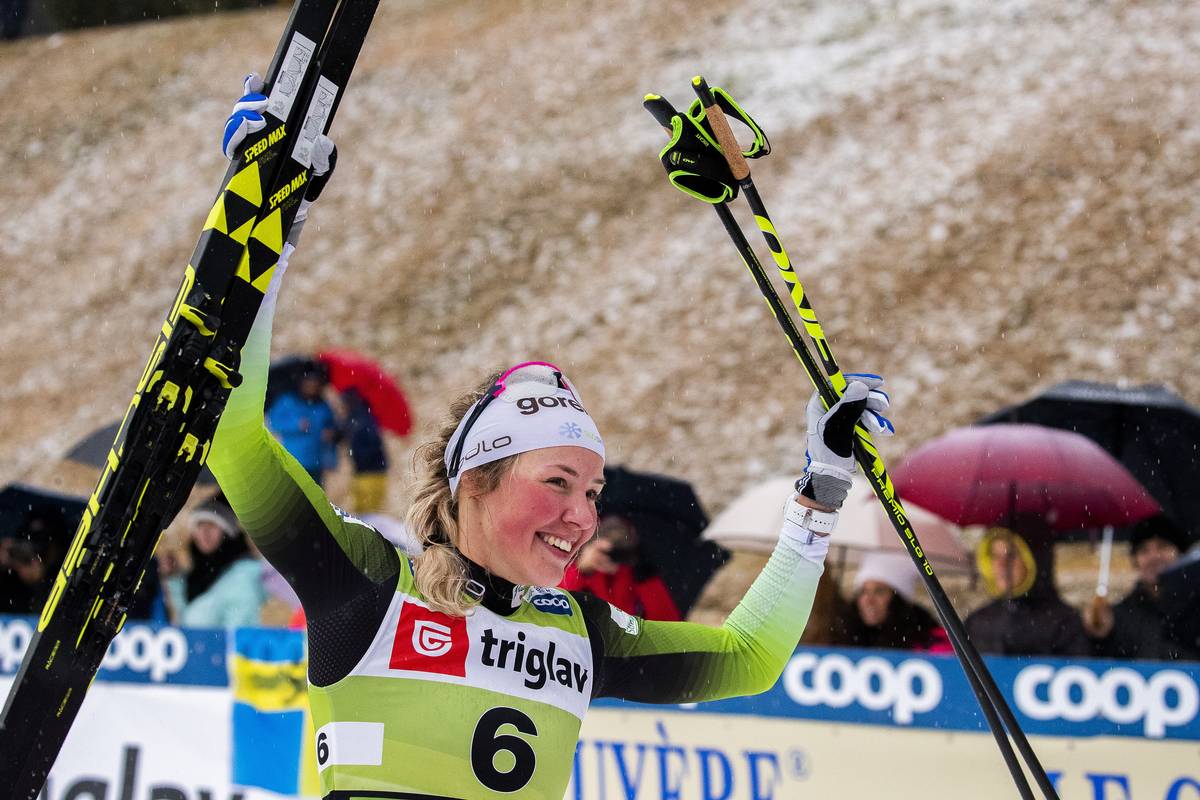 Coming into the straightaway, Svahn and Nilsson caught ski tips. Svahn lost her balance falling backward just in front of Caldwell, who managed to smoothly dodge the crash, accelerating to the finish.

In a dual with between teammates, Sundling slid her boot across the line for the win, stopping the clock at 2:32.6, Nilsson 0.22 seconds behind.

In a finish line interview, FIS called Sundling’s performance an “adventurous victory” given the weather.

“It was crazy,” agreed Sundling. “It was thunder and rain and now snow.” 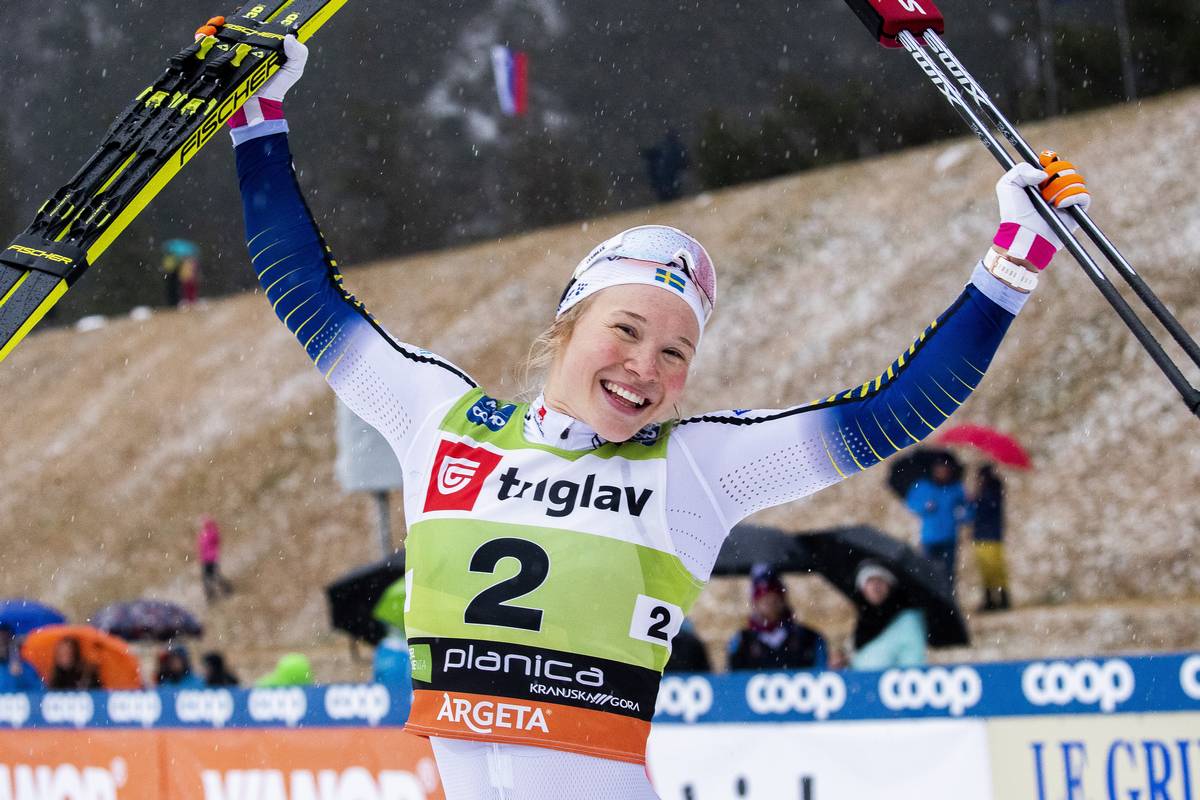 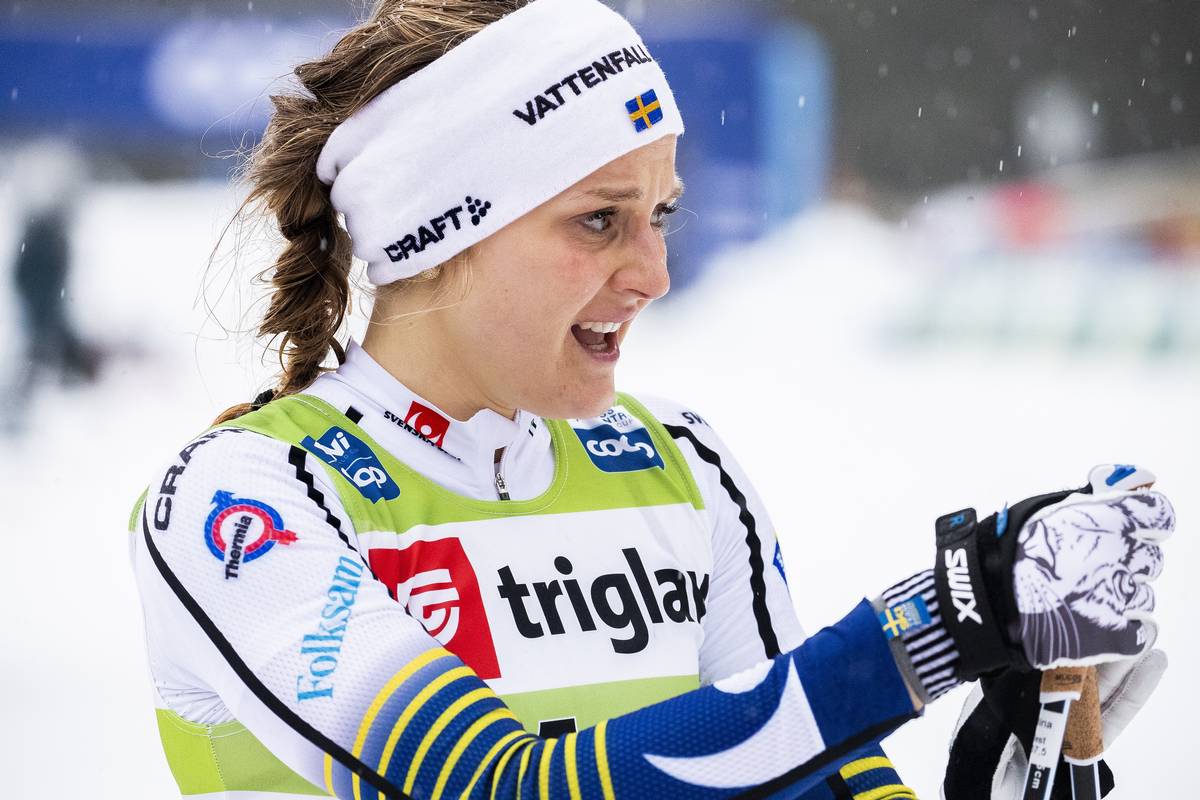 Stina Nilsson catches her breath after her second place finish at the 1.2-kilometer skate sprint in Planica, Slovenia. (Photo: NordicFocus)

Powering in their wake, Caldwell and Kern locked eyes on the finish. In the final meters, Kern outmatched Caldwell’s speed, throwing her boot over the line just ahead of her veteran teammate. She finished 0.79 behind Sundling, and Caldwell took 4th (+0.91). Lampic finished 5th (+1.49), followed by Svahn (+48.51) who skied slowly to the line looking furious. 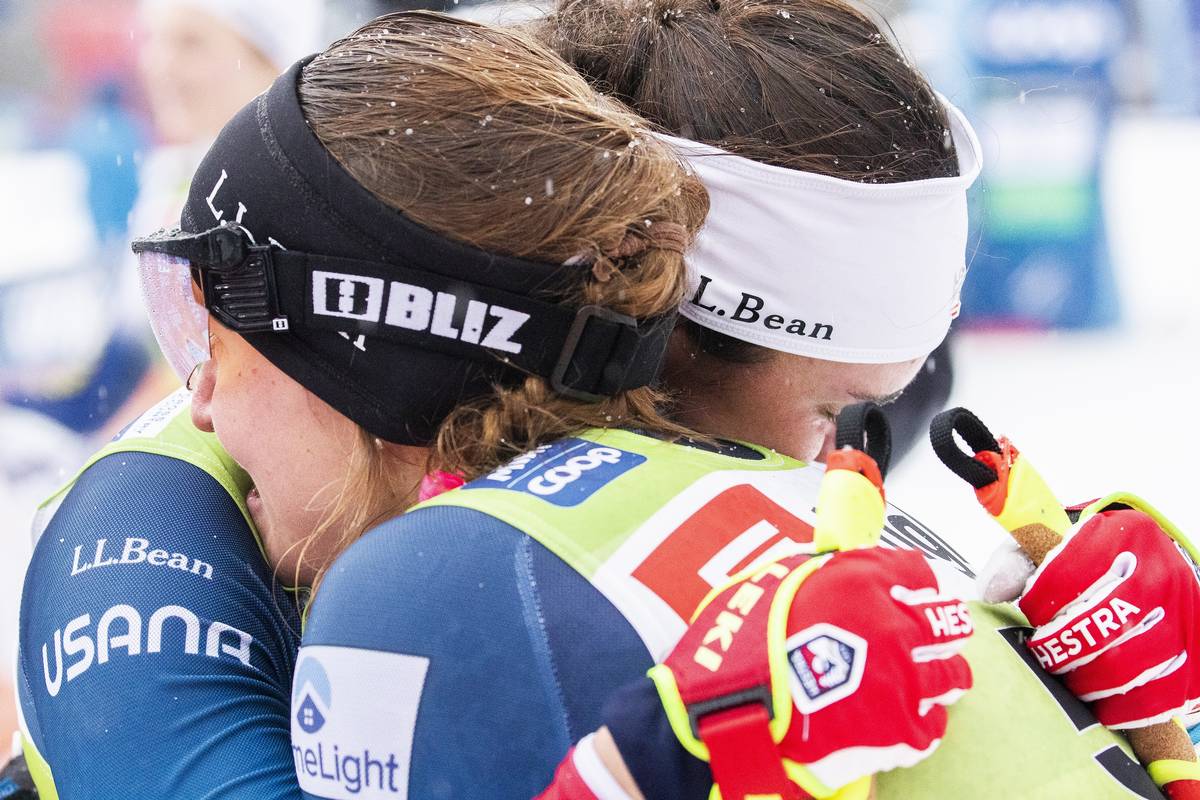 The Americans embraced, their backs rising and falling rapidly as they simultaneously laughed and caught their breath.

Kern carried momentum from last weekend’s strong performances in Davos; Kern was 15th in the freestyle sprint and 19th in the 10 k. In her post-race interview, she discusses her mindset as she entered uncharted territory in the final and why she was excited for the suboptimal rainy conditions in Planica. She also shares what’s next for her this season. 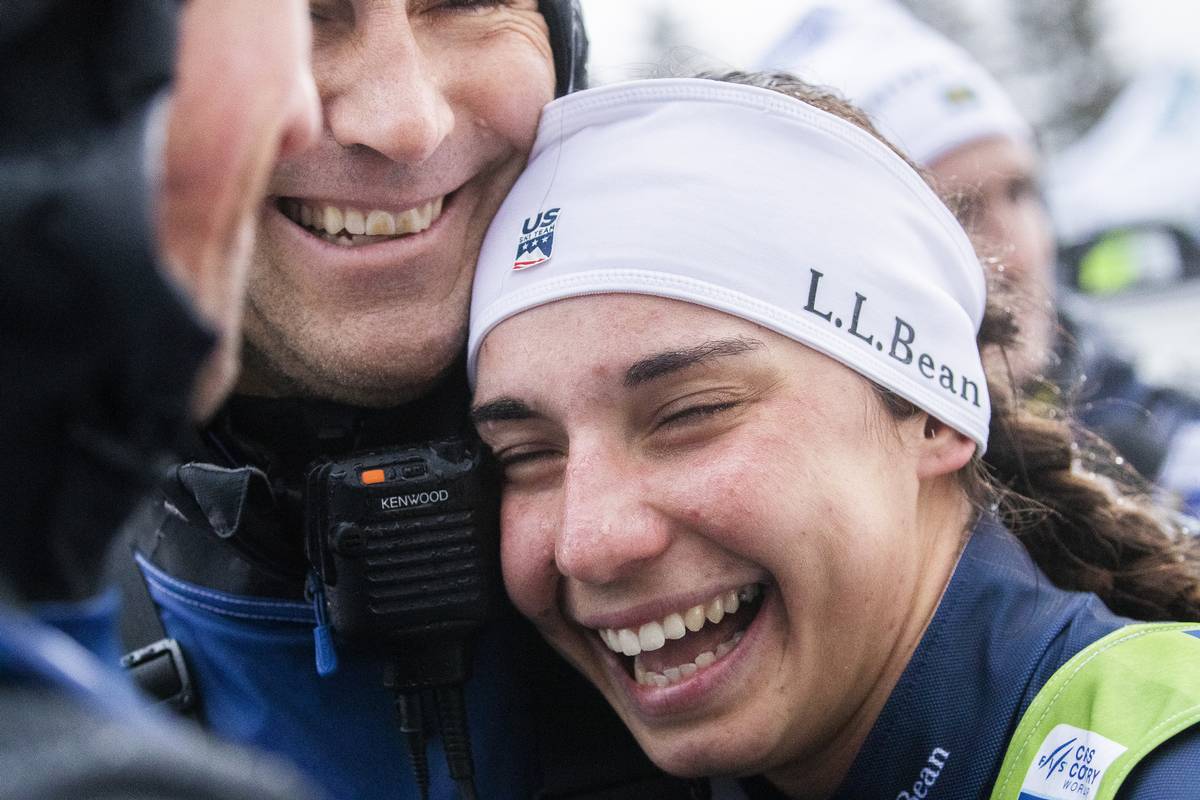 An ecstatic Julia Kern celebrates her first podium performance with her coaches after the 1.2-kilometer freestyle sprint in Planica, Slovenia. (Photo: NordicFocus)

Matt Whitcomb provided further insight into Kern’s attitude heading into the race, the tactics the team discussed, and her performance in the heats. 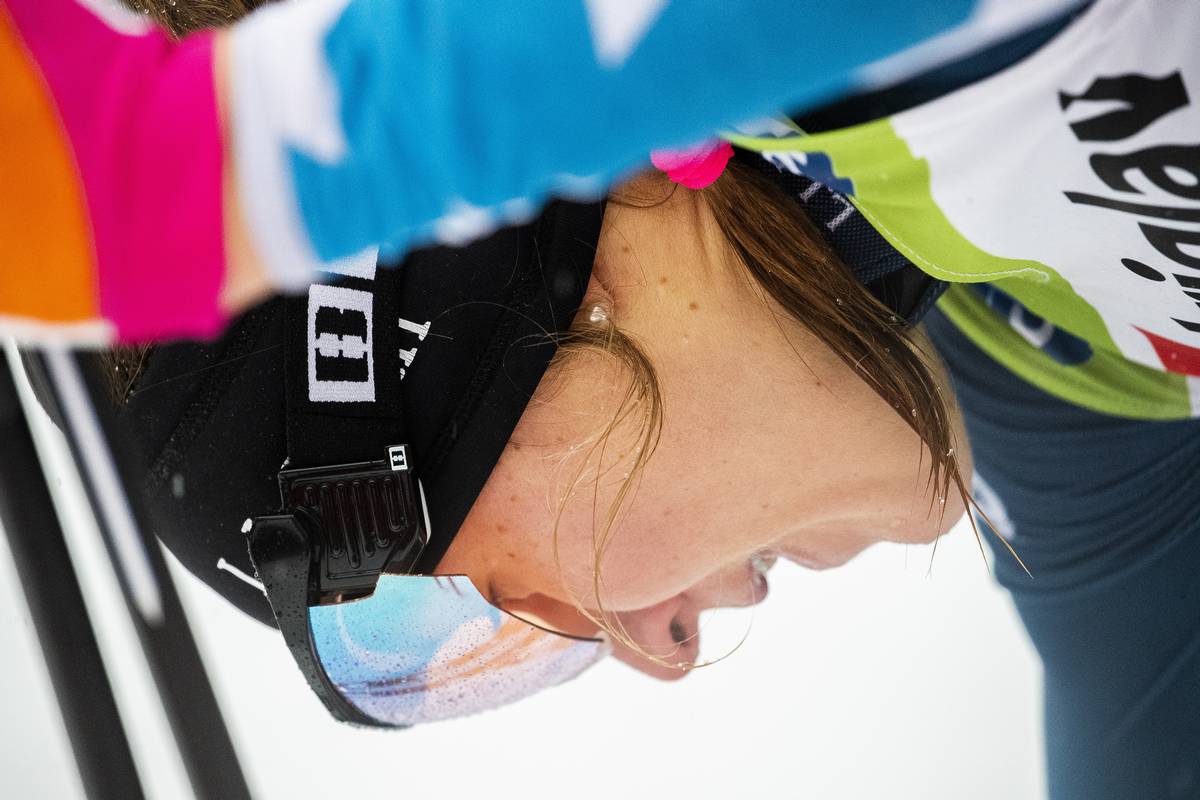 Though her vision of herself has changed over the years, Caldwell identifies short fast courses like Planica as a place she can excel. She shares insight into the course and her tactics, as well as her plans for Christmas and the following weeks. 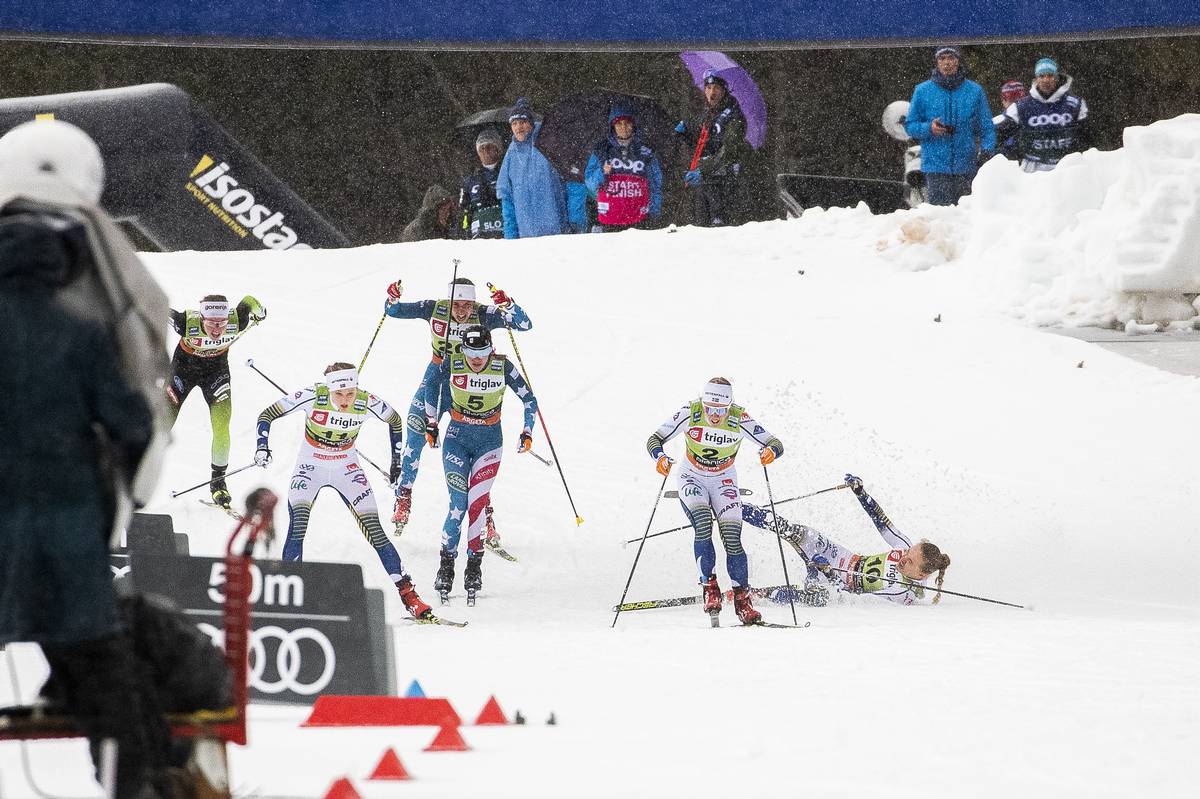 Sophie Caldwell dodges a crash with less than 200 meters to go in the 1.2-kilometer skate sprint in Planica, Slovenia. (Photo: NordicFocus)

Post-race, Whitcomb analyzed Caldwell’s journey through the heats and her feelings on finishing just off the podium.

Canada’s only entrant Dahria Beatty qualified in 29th. She took third in the first heat of the quarter-finals, just over half a second behind Caldwell and Sundling. As her time was not fast enough to earn a lucky loser spot, she did not move onto the semi’s and ended the day in 16th.