The sprint course offered three distinct climbs, one at 0.2 k, the largest at 0.52 k, and the third starting at 1.1 k. The descents mirrored the inclines of the ascents and offered little respite or recovery for skiers near their engine’s redline. 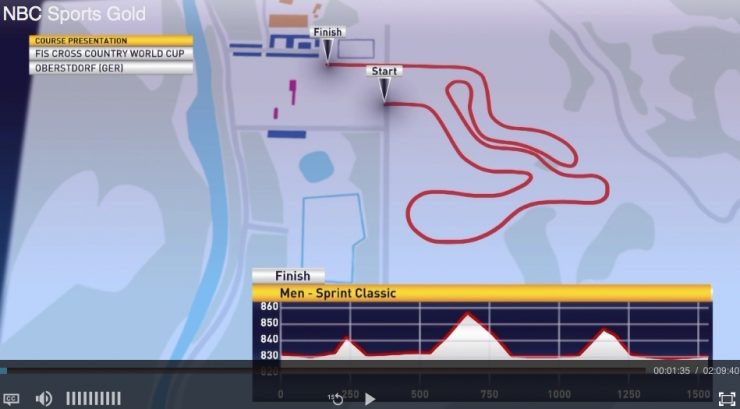 We are focusing on Klæbo, despite the other twenty-nine skiers in the heats, because he was simply a master of pacing, a master of conserving energy on the three-climb course, and freakish in his ability to run away from his five competitors in the final.

Klæbo qualified in first. The margin back to Erik Valnes of Norway in second was 2.72 seconds. Pål Golberg, the third-fastest qualifier was 5.03 seconds back. There were big-time gaps back to the field of qualifiers. 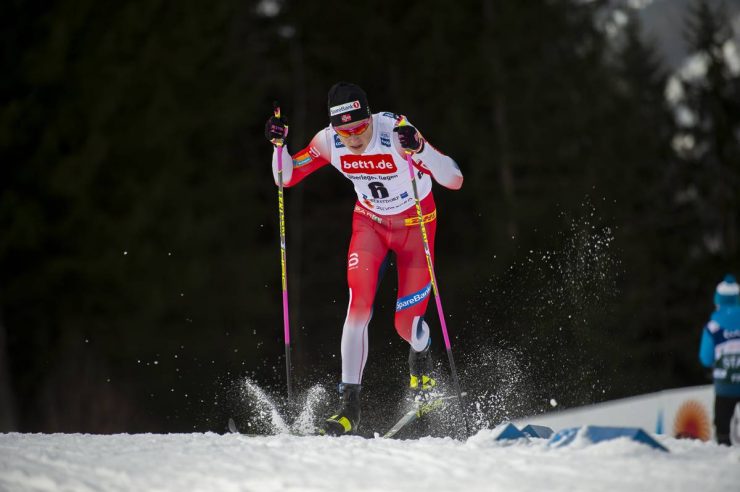 Valnes and Klæbo opted for the first quarterfinal. It was here that Klæbo played his tactical hand. He was in no hurry on this endurance sprint course to move to the front and pull others along in his wake. Klæbo sat in fourth on the second hill as Valnes was the heat’s workhorse. Klæbo appeared relaxed, not itching to move to the front. Klæbo moved to third around 2:00 minutes as they crested the course’s highpoint. The third hill, as most sprinters appeared on fumes, is where Valnes and Klæbo pulled ahead. Over the top, the duo glided into a 20-meter lead. Down the stretch, Valnes poled ahead for the quarterfinal win as Klæbo pulled up, stopped poling several meters before the finish — as if he were checking out for a lunch break.

The third hill would be Klæbo’s charm.

Along with Valnes in the first semifinal were Italy’s Federico Pellegrino (4th qualifier), Golberg, Håvard Solås Taugbøl also of Norway  (5th qualifier), and Russia’s Sergey Ardashev. This would be the semifinal to watch.

Again, Klæbo played the conservation of energy tactic. Up the second climb, Golberg, Taugbøl, Valnes, and Pellegrino strode four across with Klæbo lurking a meter back. The second hill was in the rearview mirror around the two-minute mark. It’s approximately another twenty seconds of descent and working flat before the next decisive climb.

As the skiers approached the base at 2:26, Klæbo and Valnes ramped up – they pulled away as they ski-ran up and over the top. Klæbo had been sitting behind Valnes, sucking up in his draft into the final straight. There, Klæbo pulled around his teammate for the semifinal win. 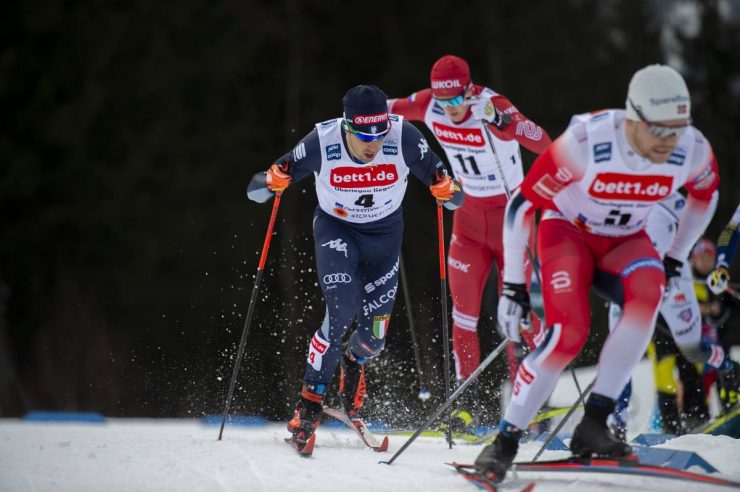 Federico Pellegrino of Italy pushing over the top in the Oberstdorf, Germany classic sprint. (Photo: NordicFocus)

The final featured Klæbo, Valnes, Golberg, Pellegrino, and Oskar Svensson of Sweden and Russia’s Gleb Retivykh. Really, for Klæbo, this was essentially a rematch of his semi.

Again, Klæbo was cautious from the start. There was no real earnestness to shoot to the front. His show would come later. There was only patience from an athlete who knew he could pounce late in the game.

Pellegrino, on the second climb, began to accelerate. He ran outside the tracks in what looked less like a decisive move, and more a burst to position himself tactically in front over the top. For his part, Klæbo matched Pellegrino and strode up alongside the Italian.

In yesterday’s 30 k skiathlon, Klæbo registered a rare DNF (did not finish) as he pulled from the competition.

“I think the sprint was much better than the 30 k yesterday,” Klæbo told FIS after the race.  “Yesterday was a really terrible day and today was a bit better. In the end, it was really cool to win here. Yah, I think my shape isn’t the best  but I am really happy to find the win here and to have the Norwegian guys here.

“I think it was a really good decision yesterday to jump off after 15 k I think, it was really nice to fight for a win today. And for sure I am really looking for the World Championship here next year.” 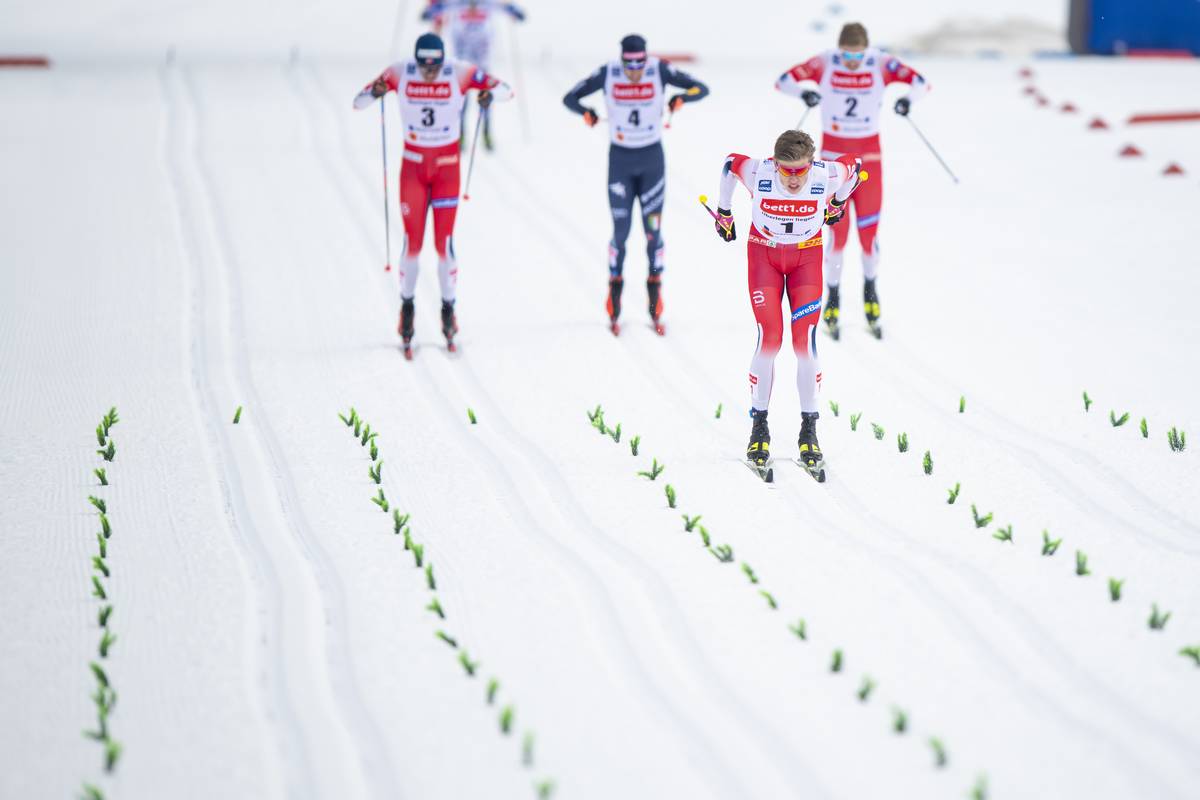 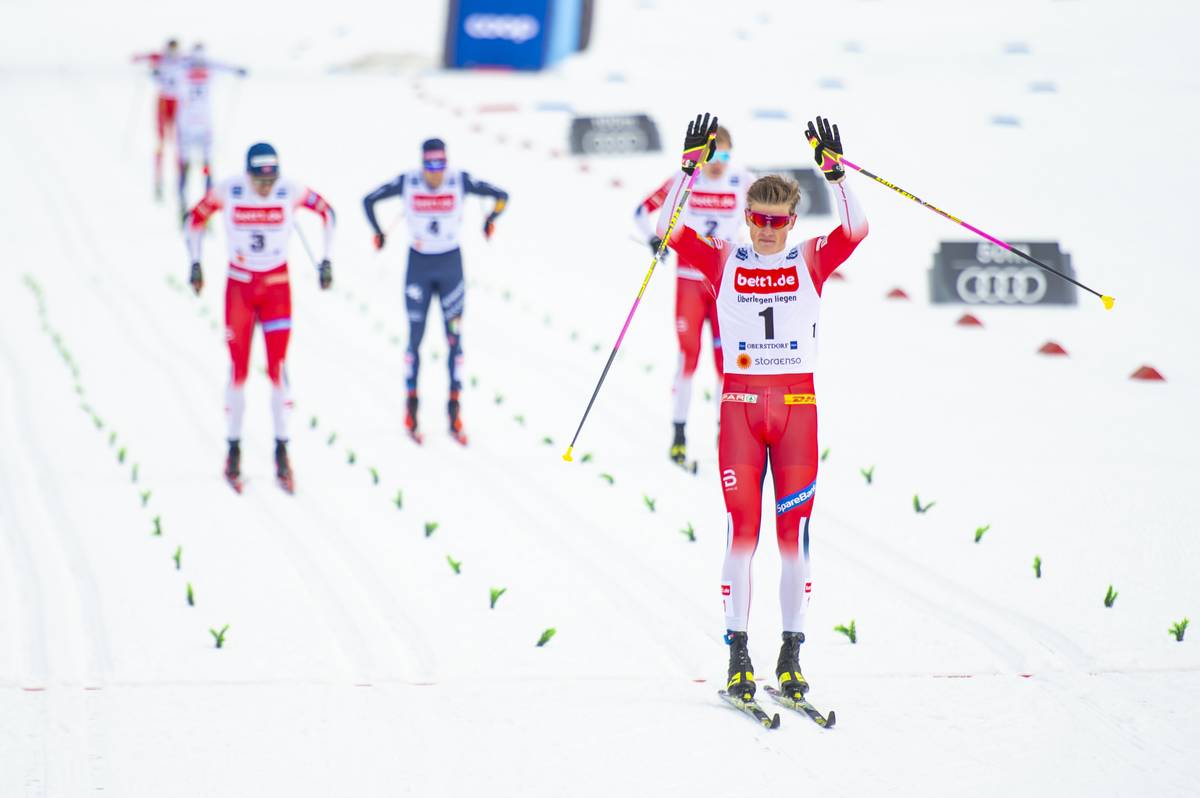 Hands up for the win: Johannes Høsflot Klæbo makes it 5 for 5 for sprints this season. (Photo: NordicFocus)

What was clear after today was that Klæbo had mastered the course. Anything can happen in a year. And anything can go down in a sprint – broken poles, clipped skis, or slide out on a corner. This much was true exiting Oberstdorf: it will be Klæbo’s race to lose at the 2021 World Championships. 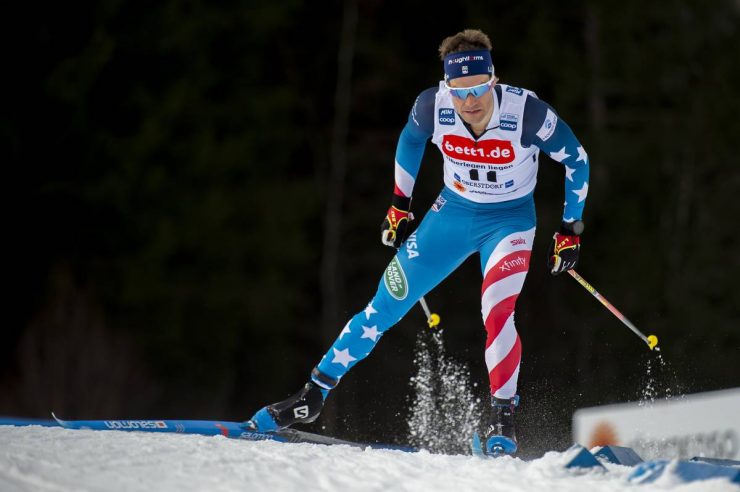 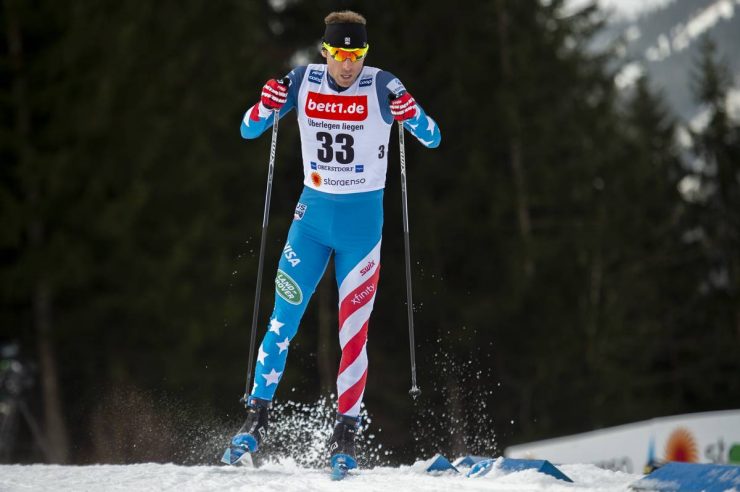 Coming out of Oberstdorf on the men’s side, Russia’s Alexander Bolshunov remains in command. In first overall with 1457 points, Bolshunov has a 235 point lead on second place Klæbo for the overall lead. Sunday, Bolshunov earned 36 World Cup points after placing seventh overall, Klæbo earned 100 points for the sprint win. If you are keeping score at home, you will note 140 points for Bolshunov’s win in Saturday’s 30 k skiathlon. On yesterday’s course, racers had four opportunities to score bonus points – Bolshunov snatched up 40 of them during the race. 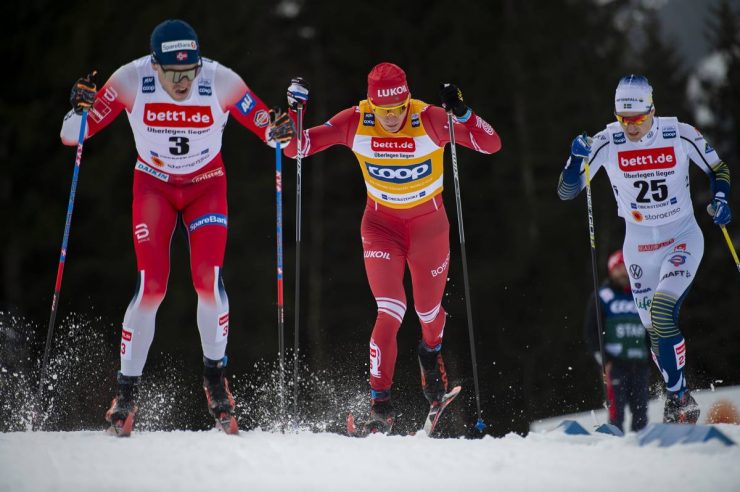 Alexander Bolshunov of Russia in the yellow bib. He leads the overall World Cup. He placed 7th on Sunday’s classic sprint in Oberstdorf, Germany. (Photo: NordicFocus)

Klæbo leads the sprint overall with 350 points. This was Klæbo’s fifth sprint win of the season. He has won every sprint entered thus far. He skipped the skate sprints in Planica, Slovenia and Dresden, Germany.

The World Cup takes a break next weekend and restarts in Falun, Sweden with a classic sprint on February 8. 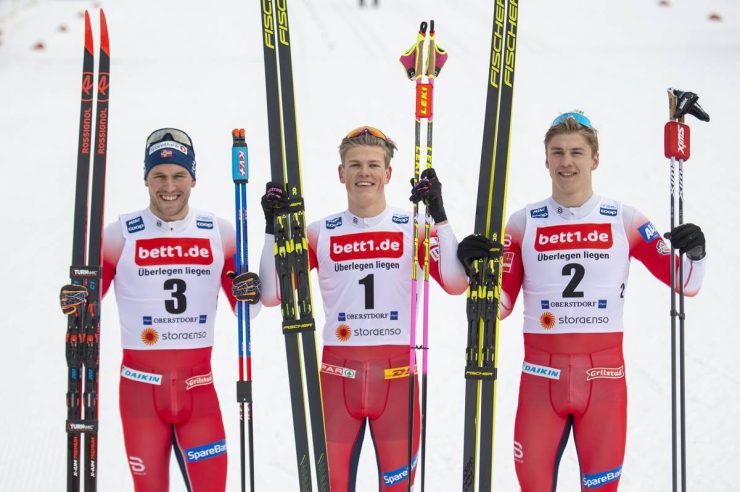