With lickety-split snow and a two-lap course lined with fans, Stage 2 of the Tour de Ski (TdS) in Lenzerheide, Switzerland, a 1.5-kilometer skate sprint, sent a few ripples through the field, but solidified Norway’s Johannes Høsflot Klæbo as the TdS front runner.

Sprint courses are the real canvas for Klæbo. With half of Sunday’s course splashed in sunshine while the other sunken in deep shadows, Klæbo was able to use his tactical smarts and his explosive finish to conserve energy, pounce when it mattered, and take the win. Which, it so happens, came with a plentiful stash of time in a 60-second time bonus. 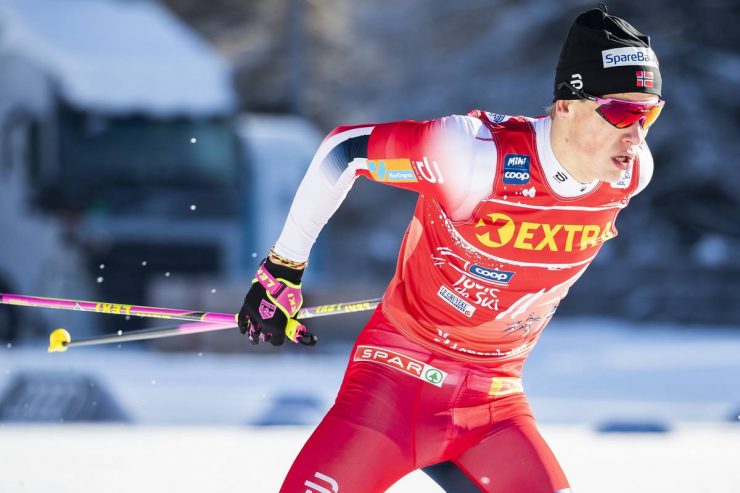 Klæbo began the day qualifying in first with a time of 2:44.64. Nearly matching his pace was Italy’s prayer for skate sprint salvation, Federico Pellegrino, who punched the clock in 2:45.84.

The duo went 1-2, Klæbo then Pellegrino, in the first quarterfinal which allowed the pair ample time to rest prior to the semis. In the first semi, it again was Klæbo-Pellegrino, 1-2 to advance. 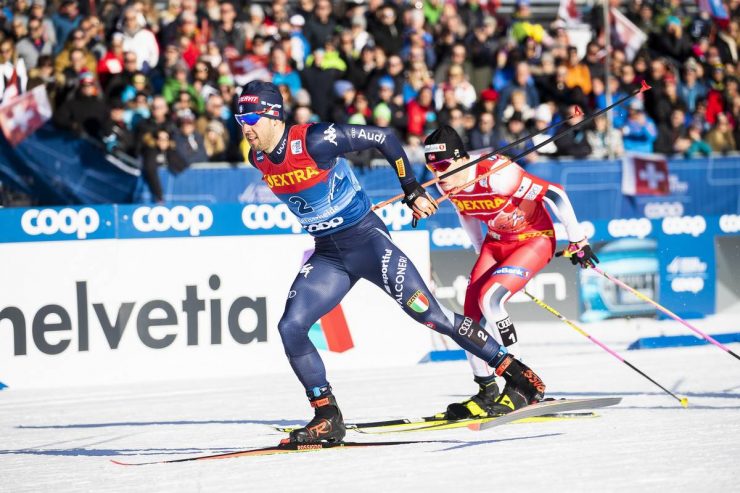 The skate sprint powerhouses: Federico Pellegrino (ITA) and Norway’s Johannes Høsflot Klæbo (NOR) during Stage 2 of the 2019-2020 TdS. (Photo: NordicFocus)

The men’s final featured Klaebo, Pellegrino, Richard Jouve of France, Pål Golberg of Norway, Russia’s Gleb Retivykh, and Johan Haeggstroem of Sweden. Jouve, who qualified in 13th, and advanced after placing second and first respectively in his quarterfinal and semi, went out in the final with a statement as he tried to secure his first career World Cup win.

Jouve went to the front immediately after leaving the start gates. The pace nothing too tepid, more of a control move to keep a potential podium in sight amidst the attacking prowess of Klæbo and Pellegrino.

A minute into the final, Jouve pushed along the shaded back straight to produce a line of six skiers – Klæbo in third, Pellegrino in fourth. With the sweeping left-hand turn which returned skiers to sunshine and the main stadium, the pace took on a this-is-for-real tempo. Jouve maintained his position upfront as they climbed out of the stadium. Klæbo sat back, several feet to the right of Jouve, safely out of traffic. 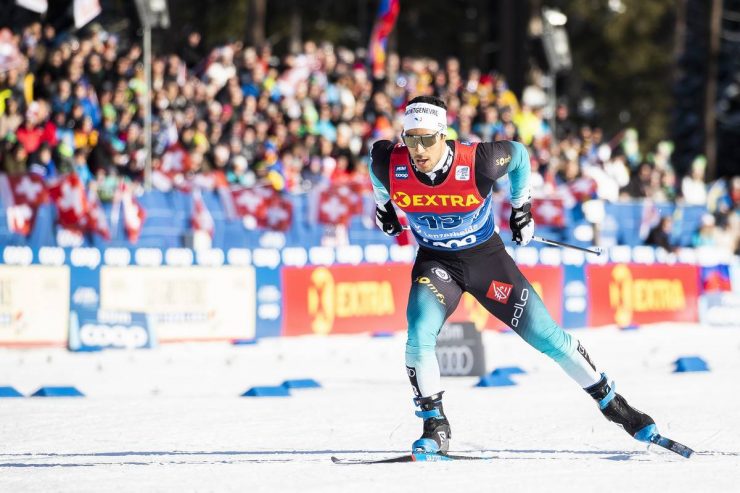 Richard Jouve of France placed third in Stage 2 of the TdS in Lenzerheide, Switzerland. (Photo: NordicFocus)

On the long descending straight on the backside of the course, just before their second time through the sweeping left back into sunshine, Pellegrino lets his skis glide him into a position behind Jouve. Klæbo kept wide and outside as they rounded the corner into the final straight.

Midway through the turn, Klæbo was textbook sprint wunderkind: he boosted ahead with a quick-turnover but equally powerful V2 to seal it. He won in 2:55.33. Pellegrino, who stuck in Klæbo’s draft down the straight, pulled past Jouve to take second (+0.35). Jouve was third (+0.57). 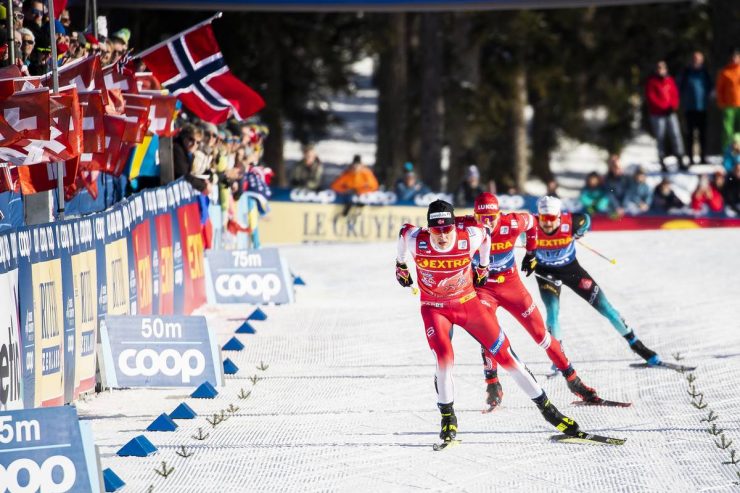 Both Bolshunov and Ustiugov stayed at the front of their semi for the first lap. That semi also featured Klæbo and Pellegrino. Bolshunov faded to fourth as the second lap ensued, while Ustiugov maintained his spot at the sharp end. Down the home stretch, they were swallowed into the Klæbo-Pellegrino maw. 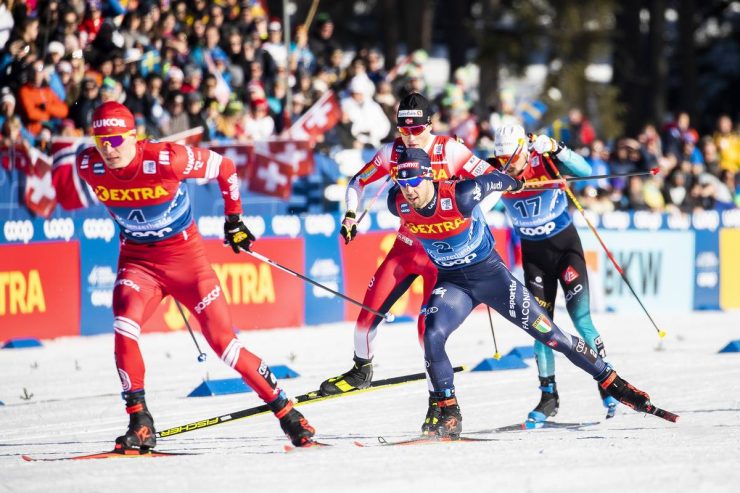 Hanneman finished 21st for a career-best World Cup result. He placed fifth in the fourth quarterfinal after getting hung up in a crash as Slovenia’s Miha Simenc and Norway’s Jan Thomas Jenssen tangled a meter ahead.

“I am quite happy with the day, even though it ended with a crash,” Hanneman emailed. “The qualifier was definitely the highlight. I honestly didn’t feel that great, so I was a little bit worried when I hit the hill on the first lap. But then I just tried to ski really big when I lapped through, abs apparently I was going faster than I thought I was.

“In the heat, everything was going well, and I was set up for a good position into the final downhill, however on the corner just after the short steep climb, the Norwegian and Slovenian came in from the outside, and collided with one another. I was directly to the inside of them and a little behind, so I had nowhere to go but to crash into them.
So it goes I suppose, but I was getting excited for the final push into the finish.

“My plan for the next few days is really to race as hard as I can in the distance races. They are not my strong suit, and I would really like to make it to the end of the Tour, so keeping within the time-back requirement would be awesome. So we will just take one at a time and see how they unfold!”

Bolger placed fifth in the third quarterfinal to place 22nd overall in the sprint. 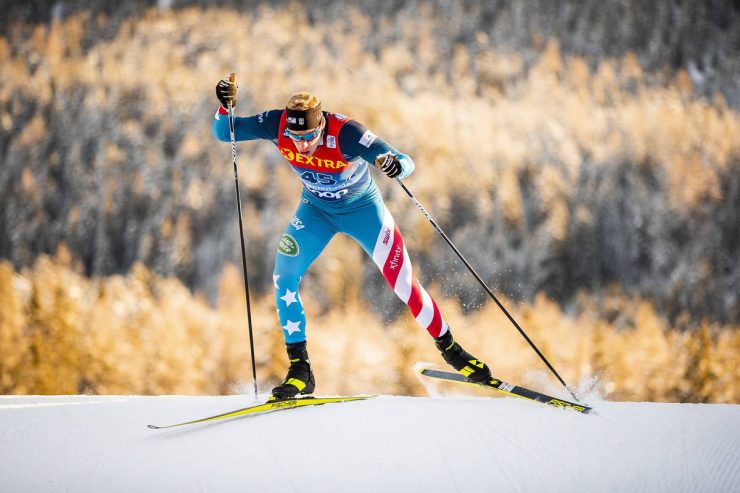 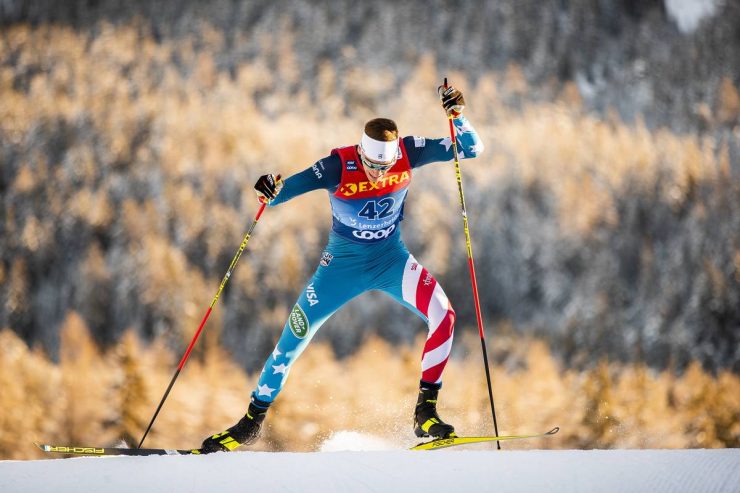 Racing continues for the men on Tuesday with an 15 k interval start skate in Tobalch, Italy. Monday is a rest day. 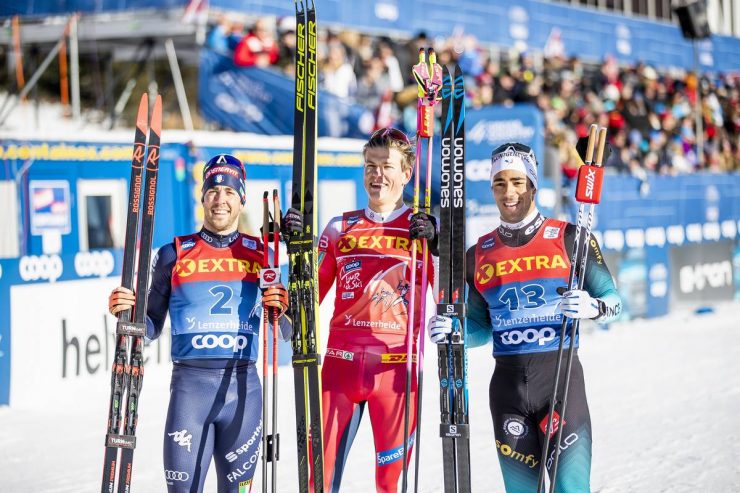