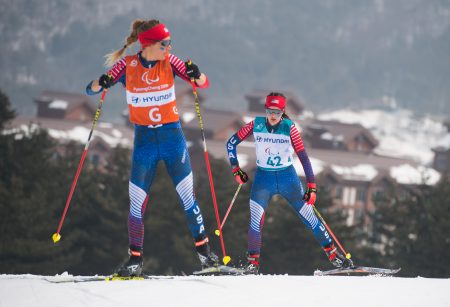 One skier is twenty years old, the other thirty four. Mia Zutter, the younger of the duo, and Kristina Trygstad-Saari, the eldest, exemplify interdependence on the ski tracks. One guides for the other. They met in Canmore in 2018 at a Para World Cup that served as a qualifier for the PyeongChang Paralympics.

Zutter is a visually impaired skier. At the age of 12, having been a lifelong athlete immersed in gymnastics and figure skating, she began experiencing issues with her vision. She was diagnosed with Stargardt disease and gradually began losing her central vision.

“I have the normal peripheral vision that everybody has,” said Zutter between classes at the College of St. Scholastica campus in Duluth, Minnesota. “But if I am standing up and looking straight down at the ground using my central vision, I cannot see my feet.”

Trygstad-Saari for her part is an able bodied skier from Bozeman who raced collegiately at Dartmouth and had several top-tens on the SuperTour. She is also an accomplished ultra-runner. Prior to those qualifying races in Canmore, the pair had never met.

“There was this new woman there in Canmore, and I thought she was just helping out, they did not say this is your new guide or anything and we get on the snow and she said she’d be skiing with me,” Zutter said. “And I was like ‘OK, we are going to race together tomorrow but I just met you today?’”

Zutter had trust in her coaches — they knew what attributes to look for in a guide. “They know me and they know how to pick good people,” said Zutter. “We skied together that day and she was great. It was just a really good conversation and it was good to have a women guide — we get each other.”

The guide-racer courtship was quick.

“I fell a couple times but it is never really the guide’s fault when I fall. But she was nervous that she blew it, and I was like ‘nope, this is how this goes, I fall sometimes.’”

Zutter and Trygstad-Saari contested several races in Canmore. Zutter expressed that up to that point she had never raced better and recalled thinking at the time “this is who I want for Korea.”

The two paired up in PyeongChang where Zutter raced as an eighteen year old. Currently, Zutter is completing her junior year at St. Scholastica and will race the collegiate circuit as she continues her studies in communications and psychology. Trygstad-Saari works as a development coach for USA Para Nordic. She’s also tasked with guiding skiers and raising awareness about nordic opportunities for adaptive athletes.

“A lot of people just don’t know what that entails and who can do that,” said Trygstad-Saari. “How can you ski if you don’t see? How do you ski if cannot use your poles? And so a lot of what we are trying to do is just educate.”

One initiative that begins on Sunday October 6th, which is National Blind Athlete Day, is an online survey from USA Para Nordic. The end goal is to build a database that eventually can pair potential athletes with potential guides. Trygstad-Saari and her colleagues aim to spread the word and get more people involved with their mission.

As a former racer who took time away from the sport to pursue other modes of adventuring and racing, Trygstad-Saari said her skiing horizons have now broadened.

“I never thought of guiding as an option and when John Farra, [the former head of USA Para Nordic] asked if I would consider being a potential guide for Mia at the 2018 Games, I was completely surprised. It turned into one of the coolest opportunities I have had in nordic skiing.”

No longer solely focused on herself and drawing the best from her own efforts, Trygstad-Saari is now firmly invested in helping others pursue their goals.

“It is a different way to feel pressure in a race when you are guiding,” said Trygstad-Saari. “I was pretty burned out for awhile on ski racing for myself and this has brought back the joy and the positive challenge. It has been so fun to be back in ski race mode but racing for somebody else. And basically my job is to create a scenario where Mia can have her best performance. The experience has transformed me.”

Zutter’s path to the sport began when her eyesight became compromised. With an older sister she admired running track, Zutter found an inclusive sport in running where she could build an aerobic engine. It was also a sport in which she could improve despite her diminished sight. After a statewide newspaper eventually ran a piece about Zutter, a representative from Central Cross Country Skiing (CXC) took note and expressed an interest in getting Zutter on rollerskis and then snow.

“I got on rollerskis and fell in love with it,” said Zutter. “It reminded me of figure skating and I was joking around that I would like rollerskiing more than snow skiing which looking back is crazy.”

A trip to West Yellowstone with CXC that Thanksgiving and she was hooked as a high school sophomore. A year later she drove from her home outside Madison, Wisconsin to Craftsbury, Vermont for Para Nordic Nationals. She was then invited to Germany with the national team.

Zutter will race with a guide this season, Jason Kask, who also serves as a wax tech for the Para Nordic team. When a guide is unavailable for daily practices at St. Scholastica, Zutter said that she can follow her teammates.

“They keep me in mind when we are skiing and tell me when downhills are coming up,” said Zutter. “But I try to really just keep up with the team and blend in as best as I can.”

If you’d like to get involved as a potential athlete or guide, here’s a link to the US Paralympics Nordic survey.

There’s no better promotion than Trygstad-Saari’s descriptor of her guiding experience as “transformational”.