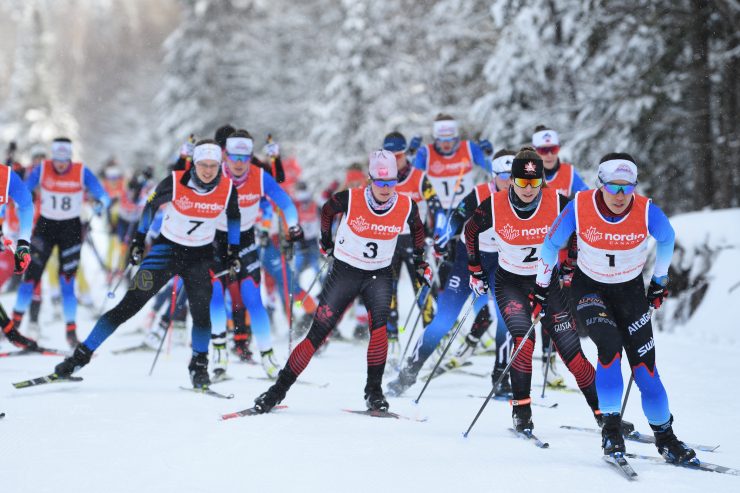 Emily Nishikawa (bib 1) leads out the U20 and Open 15km at MSA Trials. (Photo: Doug Stephen)

Mont Sainte-Anne brought great ski conditions on a weekend where the best in Canada fought to qualify for four different race trips: U20/U23 World Championships in Oberwiesenthal, Germany; Falun and the Scando Tour; the sprint tour of Québec and Minnesota; and World Cup finals in Canmore. Combine this with the usual NorAm action and COC leader competition and you have all the ingredients for a great weekend.

Over 400 athletes raced in five age groups with over 150 competing for U20 selection.

For all four trip selections, Nordiq Canada will be making a list and checking it twice. Or maybe more than twice. For U20, five athletes of each gender are selected, starting with the top skier on Sunday, then Friday, then Saturday and starting again with Sunday’s second place. For U23, four or five skiers will be selected the same way. The Sprint Tour averages the qualification and heats points to rank athletes to be selected after pre-qualified athletes. The Canmore weekend similarly sums the two distance days. With 10 Host Nation starts allocated in addition to the ones Canada has earned, there are many start opportunities. Most of the paths to guarantee a spot on next year’s National Team begin with qualifying for one of the above. But no pressure.

Each COC leader gets their own start allocation at every World Cup for the period. As there are no more NorAm (Continental Cup) events until Nationals beginning on March 26, the COC leader as of today retains this for the rest of the World Cup season. The best five of nine races are counted, which means Katherine Stewart-Jones had the women’s spot locked up in December. Antoine Cyr came into this weekend with the leader’s bib and a win Saturday was enough to keep it, according to Nordiq Canada.

The U20 and open women started the day with 15km on the same hilly 5km course as Saturday. Emily Nishikawa and CNEPH’s Cendrine Browne got away early before Nishikawa broke clear on the final long climb to win in 43:44.1, with Browne 13.4 seconds back. Browne’s teammate Laura Leclair spent most of the race alone and held off a charging pack to finish third for the top U23 result, 1:45.4 behind, just 0.8 seconds ahead of the top U20 finisher, Revelstoke’s Elizabeth Elliott. Black Jack’s Jasmine Drolet was edged out into 5th but should still have earned the trip to U20’s in Oberwiesenthal.

Nishikawa spent a rare winter period back in Canada and enjoyed the change.

“It was great to be home in Canmore, and I got a good block of training in before heading back to the World Cup,” Nishikawa emailed. “It was very fun to be able to race in Canada – in Whistler and here in MSA, and now I feel ready to get back on the World Cup.”

Nishikawa, who was 25th overall in the 2019 Tour de Ski, is focussed on the Scando Tour and racing back home in Canmore.

Browne, who is bouncing back from a tough year, was happy to be back in the game. “The race felt really good, I had good legs and great skis. I really liked skiing with Emily, it was fun to race with her again,” Browne wrote. “I should’ve taken more relays and rested more so I maybe could’ve followed Emily when she attacked at 14km. Unfortunately, when she did attack, my legs were fried!”

Browne, a distance specialist who loves the skate days, was also excited to have won the sprint on Friday.

“Winning a sprint was very fun! It was a big confidence boost! It was also a pretty tactic race, which was very fun too.”

The applause and support is always there for the good days, but no athlete has only good days.

“Last year was very tough for me, as for many athletes after the Olympics, Browne continued. “I was very depressed and wasn’t having fun anymore. It was also very hard to lose all support from my federation. After that tough year, I had a severe concussion (in the end of August till mid November) so coming back strong is such a big relief. I feel so much better, physically and mentally and I’m confident that I have a good form.”

Writing about the tough times feels like kicking an athlete when they are down. It is much easier to write about an athlete when they are scrambling to catch a flight to Falun. It looks like some athletes will be at the airport before we have a confirmed published list of who is joining Browne and Nishikawa for period 4 of the World Cup. (To be fair, that list is one of four that has to be written and double-checked by officials who also have flights to make today.)

“Today’s race was tough,” Leclair wrote to FasterSkier. “I skied alone and had a pack of 10 skiers chasing me the whole time. I would have liked to ski with Emily and Cendrine but lost them in the first lap. However, I did what I had to do and I am happy with how I skied considering I was alone.” Leclair will be going to a CNEPH elevation camp in Livigno, Italy, on her way to U23 Worlds. 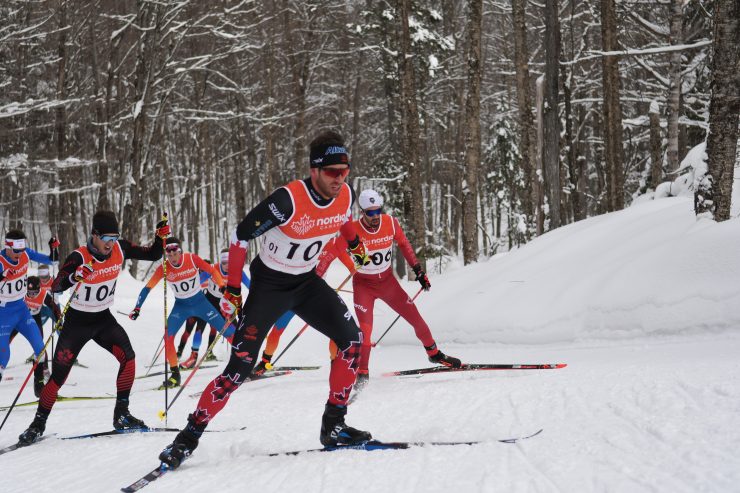 The men skied 30km and many said they were feeling the big climb by lap six. Black Jack’s Rémi Drolet animated the race early before Canmore’s Sam Hendry made a big move on the final lap to explode the pack of ten. In the end, it was Team R.A.D.’s Evan Palmer-Charrette who emerged to take the win in 1:15:49.7, with Fondeurs-Laurentides’ Ricardo Izquierdo-Bernier at 0.3 seconds and top U23 Hendry at 0.4. CNEPH’s Phil Boucher was fifth at 5.3 ahead of Rémi Drolet who took his third U20 win at 11.2 seconds back.

Foothills’ Tom Stephen popped out of the second pack to book his trip to Germany as the second fastest U20, 2:04.6 behind the winner and 11th overall.

“The race today went very well for me,” Palmer-Charrette explained in an email. “My plan from the get go was to match any move and stay in contact, the final kilometre is very high speed and my plan was to wait until there to make a move, so it played out perfectly.”

“Race went pretty well today,” Hendry wrote of his Sunday. “I skied in the group and did the best job I could to save energy. Coming up to the last climb I moved into the front of the pack to avoid traffic and found myself pulling away from the group so went all in and attacked hard over the final climb. I then had a few second lead and tried to hang on until the end of the course but blew up in the final meters and was passed by Evan and Ricky.”

Like many of the other athletes, Hendry is balancing full time studies with skiing.

“Full time school and racing is going great. The University of Utah is super accommodating and want to see me succeed in not only academics and college racing but also international competitions such as these trials and U23’s.” That balance only goes so far. In addition to collegiate racing and U23’s, Hendry is hoping to ski World Cup Finals in Canmore (which may require a good result from him in Germany), but nationals is not on the program.

Boucher should have earned his trip to Canmore with a 4th and a 5th in distance this weekend.

“The race went well,” he wrote. “I managed to react well on Sam’s move in the last km. It blew the pack in small groups. So the only tactic here was to survive until the end. But in general, the plan for today was to try to stay in the front of the pack in the uphills, so I dont get caught behind if someone makes a move.”

While many athletes are enjoying the new race calendar with less east/west flights to races, Boucher also sees a downside: less races.

“I think there’s a lack of races. We currently race 1 weekend per month… I train all summer long to race in the winter so it’s a shame when we dont have a lot of racing to do in North America.  I had a difficult start in December but at least I had some good racing at the U.S. Nationals in Houghton early in January. And then here at MSA, it’s been one of my best racing weekends of the season so far. My race shape is raising and that’s good sign for the coming races.”

While some athletes will go home happy with their race efforts and others won’t, it seems like everyone enjoyed their weekend. Palmer-Charrette put it best: “The conditions here for the whole weekend were really good, the [Organizing Committee] did a great job with the trails. Yesterday turned out to be a slightly tricky waxing day and on a relatively flat high speed course there were definitely a few athletes caught out with icing issues, however that’s the game of classic racing. For the sprint and today, conditions couldn’t get any better really, so it made for exciting races.”

Photographer Doug Stephen has more evidence of the great trails in his Sunday Gallery. Athletes are welcome to download and use full resolution images if they give credit to ‘Doug Stephen’ or @vr45photography. 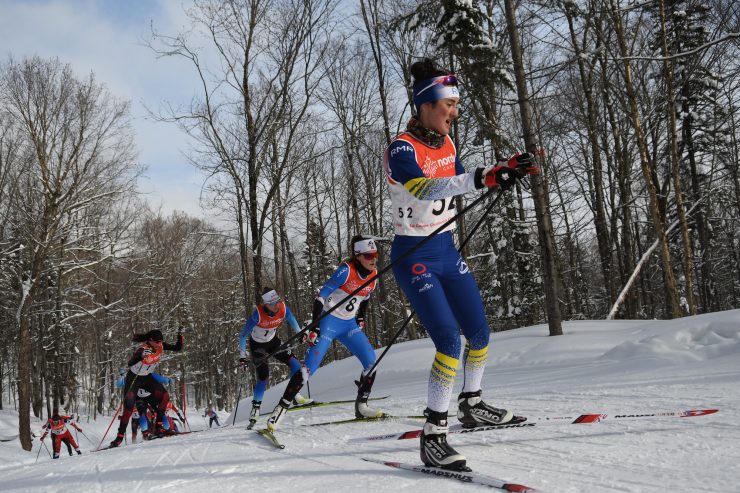