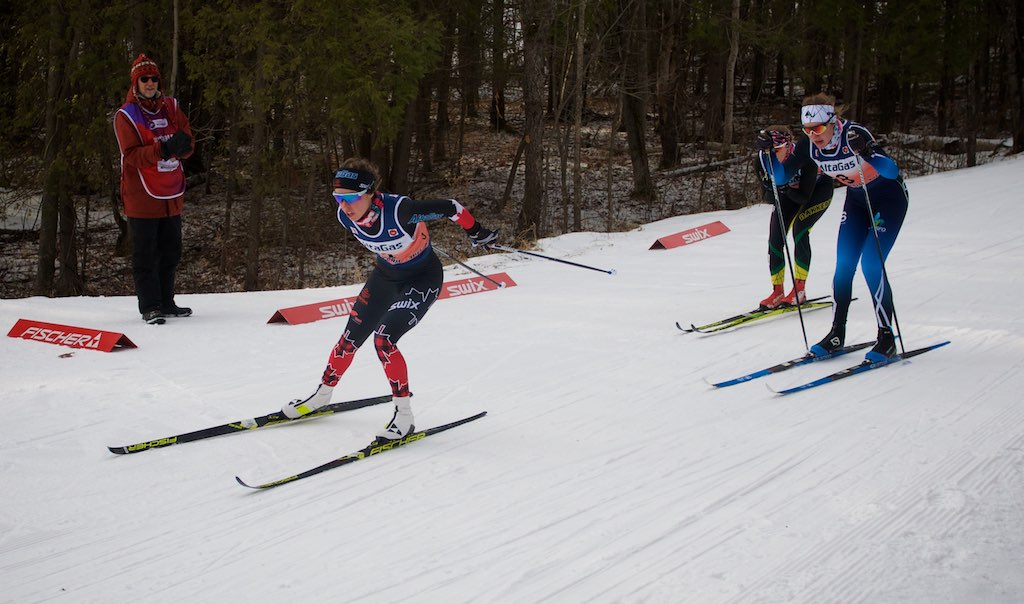 The event was also the Candy Cane Cup for the younger categories, as well as Ontario Cup 1 and Coupe Québec 1. 374 athletes in the U16, U18, and Open categories competed on Friday with many more younger athletes racing Saturday and Sunday.

Nordiq Canada’s Jeff Ellis was there and has once again shared the full-length post-race interviews. Photographer Robert Smith has galleries for each day, so keep scrolling.

Nakkertok had over 3km of trail open thanks to their snowmaking, with a 2.5km loop used for the distance races. 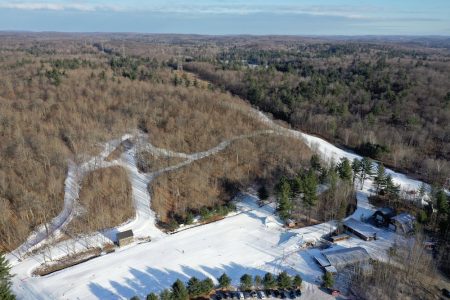 The ‘NakkerTrak’ at Nakkertok before the 2019 NorAm weekend. (Photo: Natural Fitness Labs)

On the women’s side, it was the KSJ show, with home-grown national team member Katherine Stewart-Jones winning all three days.

In the sprint, Stewart-Jones finished in 3:19.96, comfortably ahead of AWCA’s Maya MacIsaac-Jones and RMR’s Katie Weaver at 2.43 and 3.93 seconds back respectively. The podium trio were the top three qualifiers, but in reverse order.

Stewart-Jones steamrolled the field in the free 5km, 36.8 seconds ahead of Laura Leclair in second and 39.9 seconds before Cendrine Browne, both of CNEPH.

The trend continued on Sunday, with Stewart-Jones finishing the classic 10km in 28:52.1, 1:18.1 ahead of Skibec’s Andrée-Anne Théberge and 1:29.8 ahead of AWCA’s Annika Richardson. 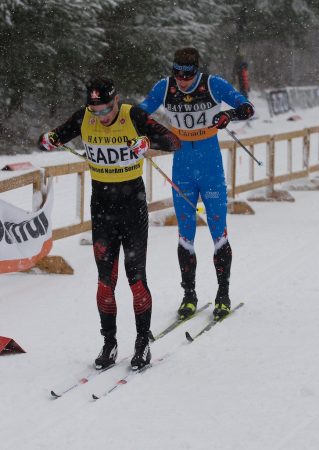 For the men, Hardwood’s Bob Thompson kicked the weekend off with a sprint victory in 3:12.71, followed by national team member Antoine Cyr at 0.36 seconds and his CNEPH teammate Antoine Briand at 0.63.

Palmer-Charrette stepped up to finish the weekend on top of the podium, winning the 10km classic in 24:43.8. National team member Julian Smith was second at 6.2 seconds followed by Cyr at 14.4 seconds.

For many Canadians this season, the big focus is on the Mt. Sainte Anne (MSA) NorAm in January, which is the Junior and U23 World Championship trials. That series is also a path to World Cup starts. As a result, a number of athletes chose the nearer of the two December NorAm races and skipped the other to reduce travel. Over 30 western Canadians drove to Sun Valley for the SuperTour event instead of flying to Nakkertok.

“I think that it’s good for younger athletes to chase high competition for development,” Stewart-Jones wrote in response. “It makes more sense for them to travel less too. This year, for most of the younger athletes and even a lot of the older ones, the focus is on trials in MSA in January so there is a lot of time to prepare for their optimal race performance.”

“If I hadn’t been trying to get the COC spot locked up for the rest of the season I would have most likely gone to Sun Valley too.”

There is a complicated calculus to getting World Cup starts in Canada. The COC leader gets FIS-guaranteed starts and financial support from the host organization for each race weekend. Keeping the COC leader bib for the season would mean more and cheaper time on the World Cup for Stewart-Jones. Dahria Beatty and Emily Nishikawa chose to race period 1 in Europe instead, with Beatty qualifying for the next WC trip selection by placing 25th in the Davos sprint on Saturday.

Thompson talks sprinting and his season (below)

Palmer-Charrette is happy to get the win (below)