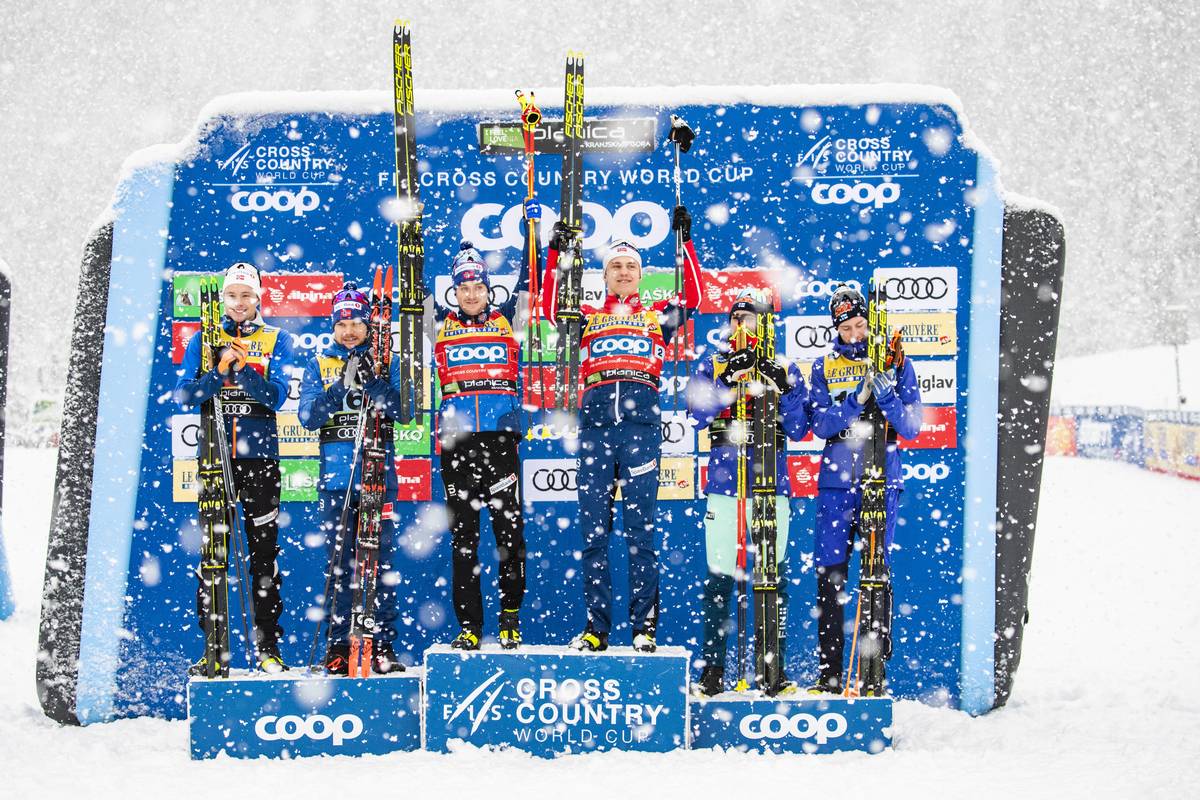 The men’s podium of the freestyle team sprint in Planica, Slovenia. The Norway I team of Sindre Bjørnestad Skar and Erik Valnes took the win over the Norway II and Finland teams. (Photo: NordicFocus)

From under the umbrella to inside the snow globe. Fat flakes were falling in Planica, Slovenia at the start of the freestyle team sprint. A painful mix of speed and endurance, each team member skied three 1.2-kilometer laps for a total of 7.2 k. Comprising the victorious Norway I team, Sindre Bjørnestad Skar and Erik Valnes stopped the clock at 16:54.52. Fellow countrymen Håvard Solås Taugbøl and  Gjøren Tefre took the Norway II team to second place (+1.29) followed by the Finnish team of Ristomatti Hakola and Joni Mæki in third (+1.43).

Coming into the third exchange at the halfway mark of the race, the pack of athletes included all ten teams, no one able to break apart the masses in the slow conditions. A variety of teams including Norway, Finland, and France took turns trying to create a gap, but wasting energy too early in the slow snowy conditions risked hazard. 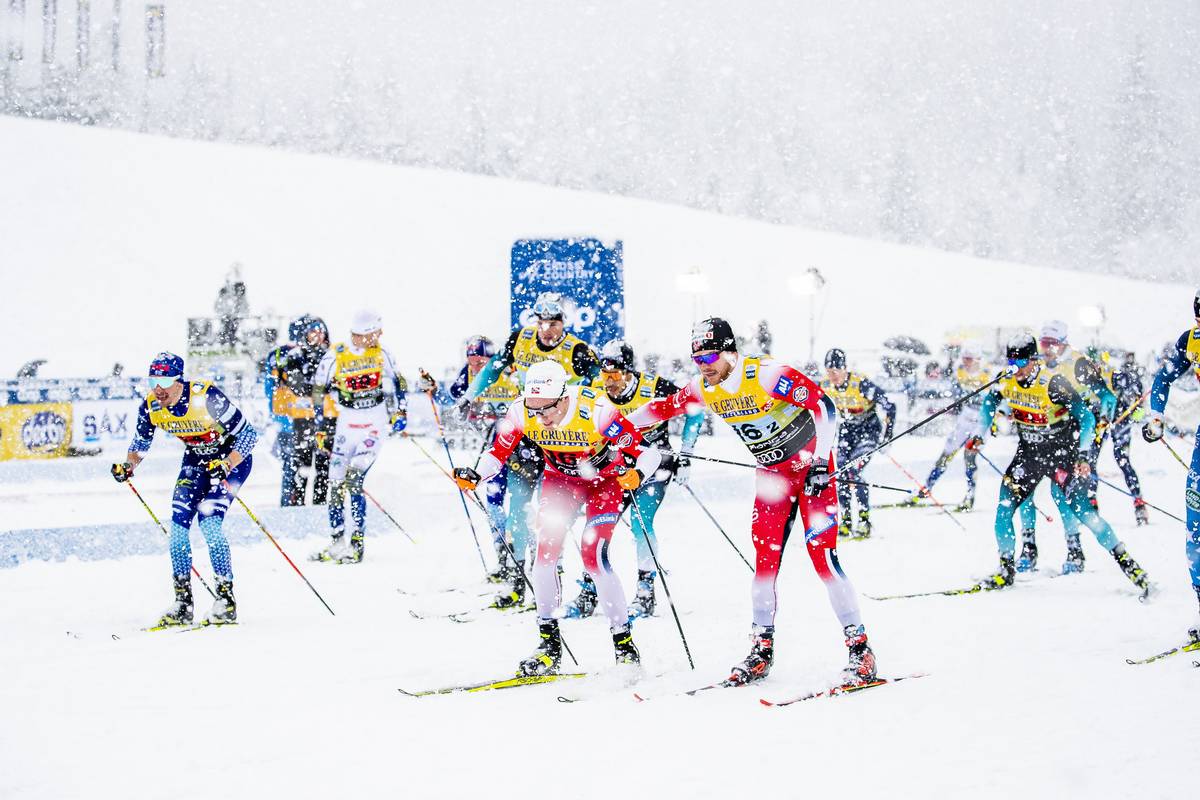 The Norway II team of Håvard Solås Taugbøl and Gjøren Tefre tag off in a tight field during the freestyle team sprint in Planica, Slovenia. (Photo: NordicFocus)

By the fourth exchange, there was no longer time to wait. Skar of Norway I pushed by Tefre of Norway II began to surge. He quickly created a small gap to all but Richard Jouve of France and Hakola of Finland I who went with the leaders in red.

Though the density was lowered, the spread of the top eight teams was less than nine seconds as they made the final exchange. Having mingled with the leaders throughout, the American duo of Kevin Bolger and Logan Hanneman sat in fifth, less than three seconds back on the Norwegians. 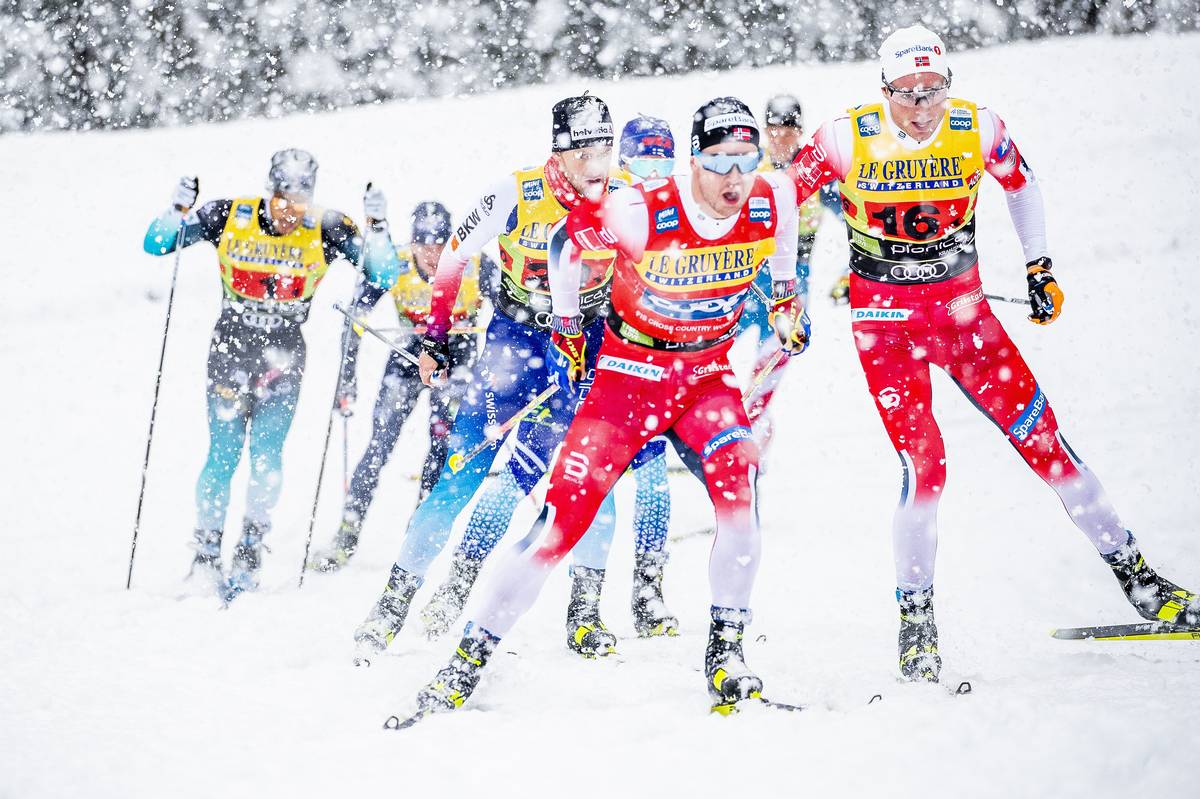 Densely packed inside a snow globe, Norway pushes toward a 1-2 sweep in the freestyle team sprint in Planica, Slovenia. (Photo: NordicFocus)

Winding up the energy in the final leg, Norway again made a push to break apart the field. Allowing them to lead to the climb at halfway, then working his way around the outside, yesterday’s sprint champion Chavanat made a go at the lead. Cresting the hill, Chavanat’s V2 was outmatched by two men in red jump-skating as though indefatigable even after 3.5 k’s of sprinting.

Perhaps spent from his attempt to lead, Chavanat’s tempo could not match the others and he was overtaken in the final meters. Tefre slid his boot over the line just ahead of Mæki, leaving the French team 0.07 seconds off the podium. 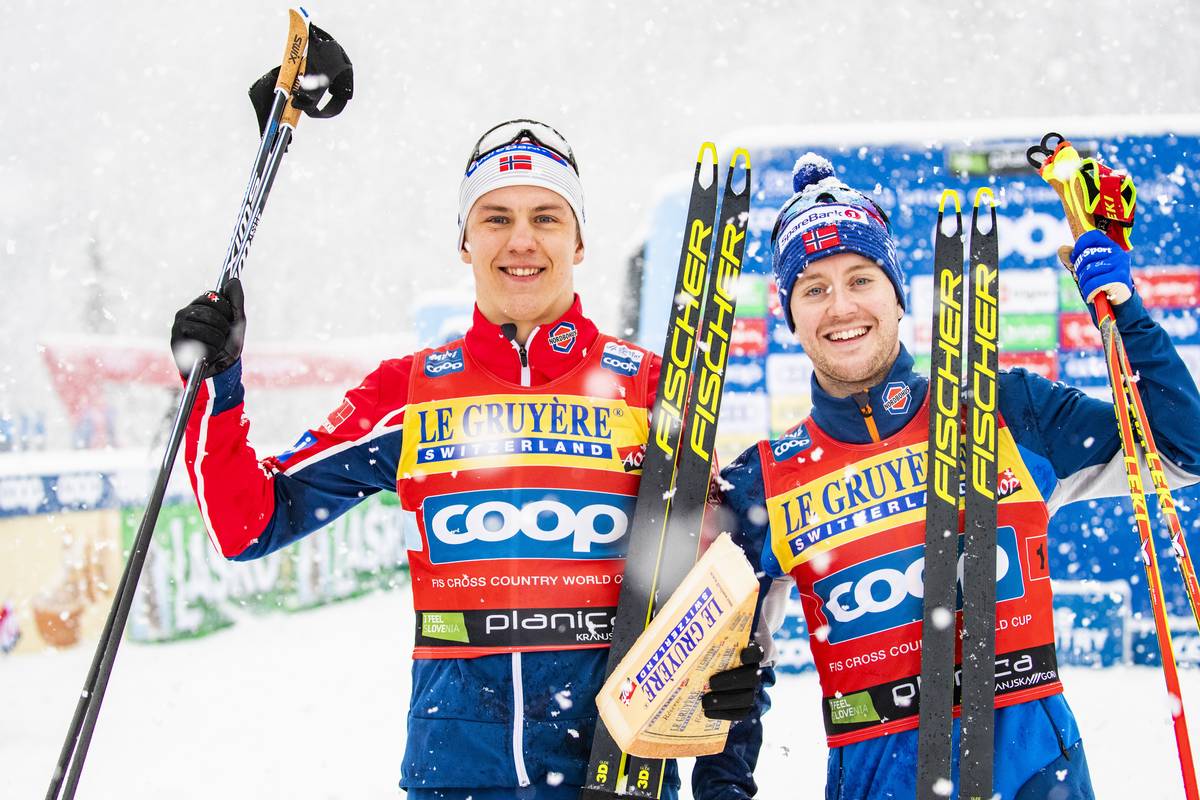 The Norway I team of Sindre Bjørnestad Skar and Erik Valnes took home the cheese at the freestyle team sprint in snowy Planica, Slovenia. (Photo: NordicFocus)

“It was a challenging day [for conditions], just as yesterday,” Skar told FIS at the finish line. “But it’s the same for everyone so you just have to deal with it and do your best.”

The veteran duo of Skar and Valnes also won the team sprint in Dresden in January, and their teammates Johannes Høsflot Klæbo and Emil Iversen won the subsequent event in Lahti in February, making this three for three for Norway in team sprinting.

He explained how the wet falling snow affected tactics and how the race unfolded for the Norway I team.

“It was so close and then with this weather it is almost impossible to go alone in the front. I tried the last half, but it was difficult, but we had to try and Erik was the best guy at the finish.” 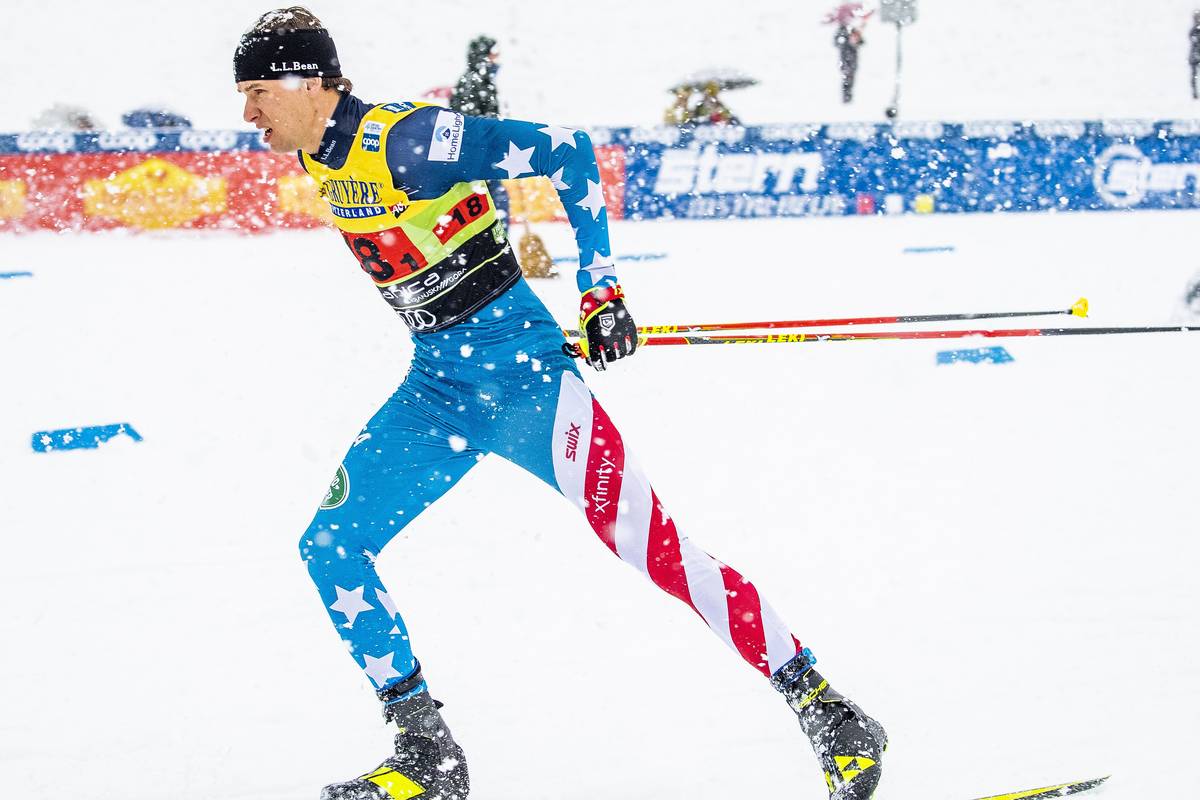 Kevin Bolger accelerates out of the exchange during the freestyle team sprint in Planica, Slovenia. (Photo: NordicFocus)

After losing contact with the leaders in the final lap, the Americans held on for 7th place (+21.19).

In a post-race call, Whitcomb explains that the team of Bolger and Hanneman was not finalized until the morning, when original anchor Simi Hamilton, who took 12th in the rain yesterday, was forced to withdraw after coming down with a cold. Because of the adjustment, the team lost their start position in the semifinal and began at the back of the field. The men finished eighth in the fast first round, from which the top three teams went on to be the top three teams in the final. The Americans advanced to the final with the last lucky loser spot.

Post-race interview with Matt Whitcomb on the men’s team sprint. 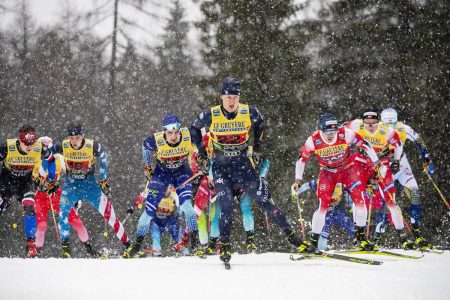 “Logan and I had the weather on our side today!” wrote Bolger in an email. “I was skiing well but punched it to the front of my semi-final on the second lap and got a bit flooded from that. Luckily, Logan skied really well on his final lap to bring us into qualifying contention!

“The Final felt a lot better,” he continued. “I skied a lot more conservatively and tactically better and am happy with how I moved forward. I was a bit surprised when Logan came into the Tag zone leading but was ready to head out and give it my all for the last lap!” 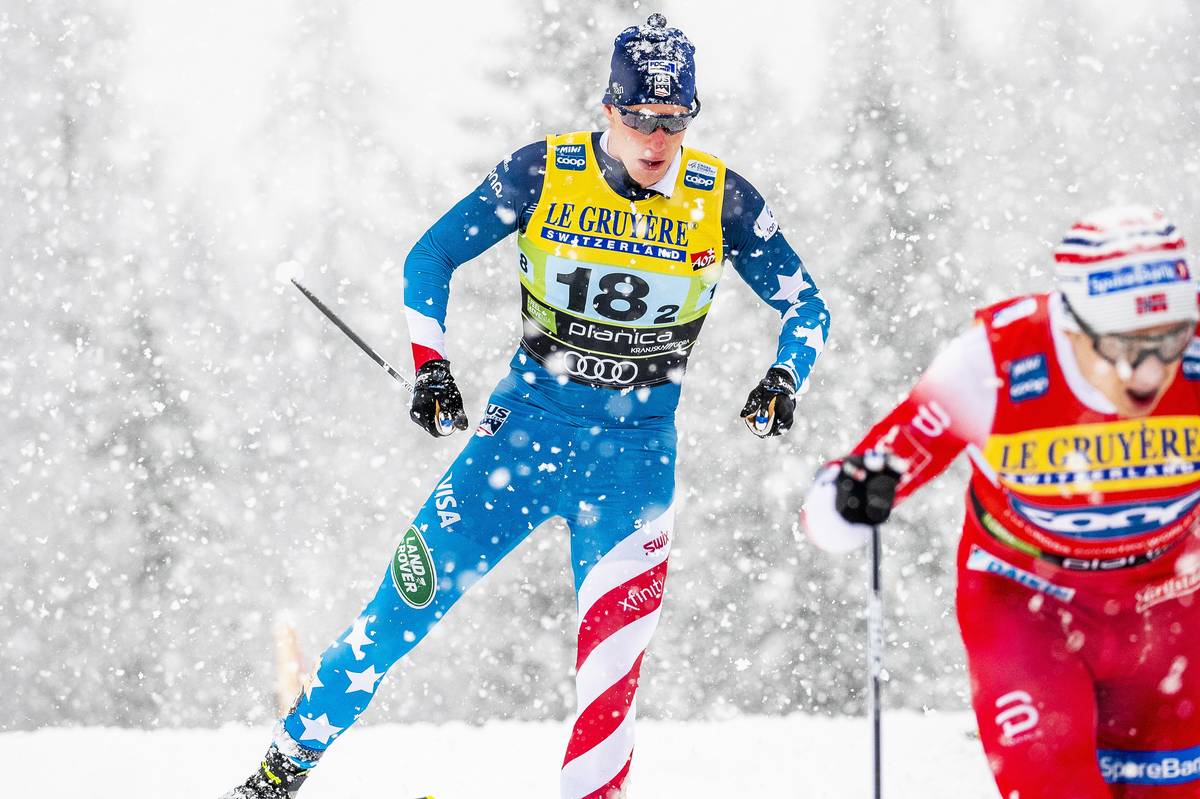 Logan Hanneman stays in the mix behind Norway during the freestyle team sprint in Planica, Slovenia. (Photo: NordicFocus)

At 26-year-old, Sun Valley native Kevin Bolger is in the midst of his third season of World Cup starts, landing inside the top-30 on eight occasions. Hanneman, who hails from Fairbanks, AK, has much less experience on the World Cup. Whitcomb explains how weekends like this one, where many of the all-arounders are resting for the Tour de Ski, consequently narrowing the field and improving the odds of sprinters like Hanneman who are often on the cusp of qualifying for the rounds.

Post-race interview with Matt Whitcomb on Logan Hanneman’s development on the World Cup.

“The final was just nuts,” wrote Hanneman in an email about his day. “It was snowing so hard. The pace was much more pedestrian than the semi final. I found myself with an open lane up the last hill of my second lap, and made what I thought was a low energy move up into the lead… turns out it was all adrenaline because come my last lap I was dying. But Kevin skied great during the whole final, and we were able get beat some teams in the final. Very happy with the day for sure!”