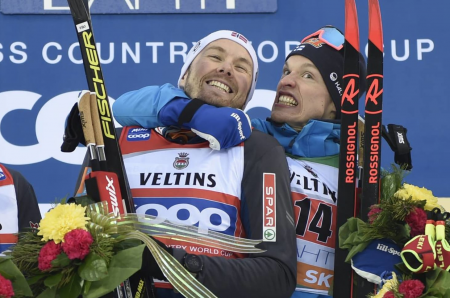 On the way to the win, Norway I won their semi-final with of a time of 19:22.32, 0.63 seconds ahead of Germany. Norway II, on the other hand, came in third in their heat to first place Russia I and second spot Finland I.

The finals were marked by several teams vying for the lead. In six lap race, with each athlete skiing three 1.6 k legs, the team sprint favors those with endurance and traditional flat-out World Cup speed. At times, the Swedes, the Italians, and Russians all made plays for the lead. None were able to make any advance stick or discourage Norway I.

Norway II, the second overall team on the day, held a more conservative approach in the final. Coming into the start of the third lap, they were positioned in eighth. They began to surge toward the front during the race’s second half, moving into fourth after 4.8 k. During the final two laps, they maintained their position near the front. At the 17:40 minute point of the race, as Klæbo stamped his aerobic mark on the race with a surge on the final climb, Norway II tried to match the tempo, but sat in fourth.

At the hairpin turn atop the climb, where skiers began their long descent into the stadium, it was two team race for second with Klæbo meters ahead.

Finland I, in second as the skiers descended, skied a tactfully sound and uptempo race.  Niskanen was the smart-choice Finnish anchor as he raced the fastest lap time of the race (3:16.04 minutes) during his last lap.

Finland came into the finish with what looked like a lock for second. But Norway II’s Brandsdal put on a sprint finish double pole clinic topped with a perfect out stretched toe and lunge at the line to take the second spot ahead of Finland I. 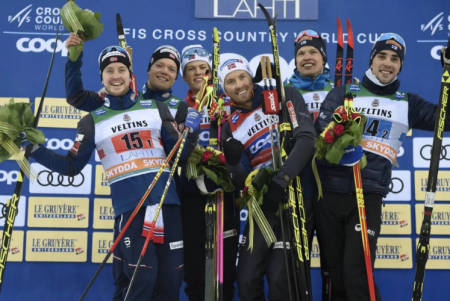 USA I and USA II were in the same semi-final today: Simi Hamilton and Erik Bjornsen filled out USA I while

Kevin Bolger and Logan Hanneman skied for USA II. USA II placed sixth and USA I was right behind, placing seventh in the semi-final. Neither team advanced to the finals.

Bolger discussed the snow conditions via email, “Conditions were very wet, and sloppy which made it a Klister day.” Bolger also explained how condition affected skis today, “I felt like I had a really good A and B pair of skis coming into the race which made it easy on my tech Oleg to make sure that for each of my relay legs I had ripping fast skis — and I did, so a  huge shout out to him for giving me some of the best skis today!”

On his final lap, Bolger skied the fastest lap time of his cohorts in a mark of 3:09.0 minutes.

“Logan, this was the first team sprint he’s done, and he was impressive today,” Whitcomb told FasterSkier in a call. “He wasn’t quite good enough to advance past the semis, but he was close and he just got over here, so it’s a very good sign for him.”

Hamilton also touched base with FasterSkier after the race, via email.

“I was disappointed with how the race went today,” Hamilton emailed. “Erik skied really, really well and kept us in contention, but I came up short. I haven’t been feeling great all weekend, and the conditions, especially today, were a bit tough for me.”

Hamilton took the month of January to focus on training and hasn’t raced a World Cup since January 1st.

“I’m hoping that this weekend was just me blowing some cobwebs out of the body and the head,” Hamilton added. “I also haven’t raced a classic race since early December (and haven’t raced a classic sprint yet this year if you don’t count Ruka, where I had a fall at the start), so I felt quite rusty. Training has gone really well in the last couple weeks, and from everything I’ve gathered from hard workouts in the last 10 days, I know I’m fit right now. I think it’s just a matter of getting my sprint gear back which I may have lost a bit in the last 6 weeks.”

Whitcomb summed up today’s results with this statement, “While the results were a little bit disappointing today in Lahti, I really believe we have a team that is well prepared for World Championships, we like to go to going into the Championships having knocked a few races out of the park and we had a couple hits this weekend, but not as many as we intended to. So we will be looking to swing hard in Cogne. I feel very confident about our Seefeld championships with this team, its a strong crew.”

The World Cup will be move to Cogne, Italy next weekend before heading to Seefeld, Austria for World Championships.