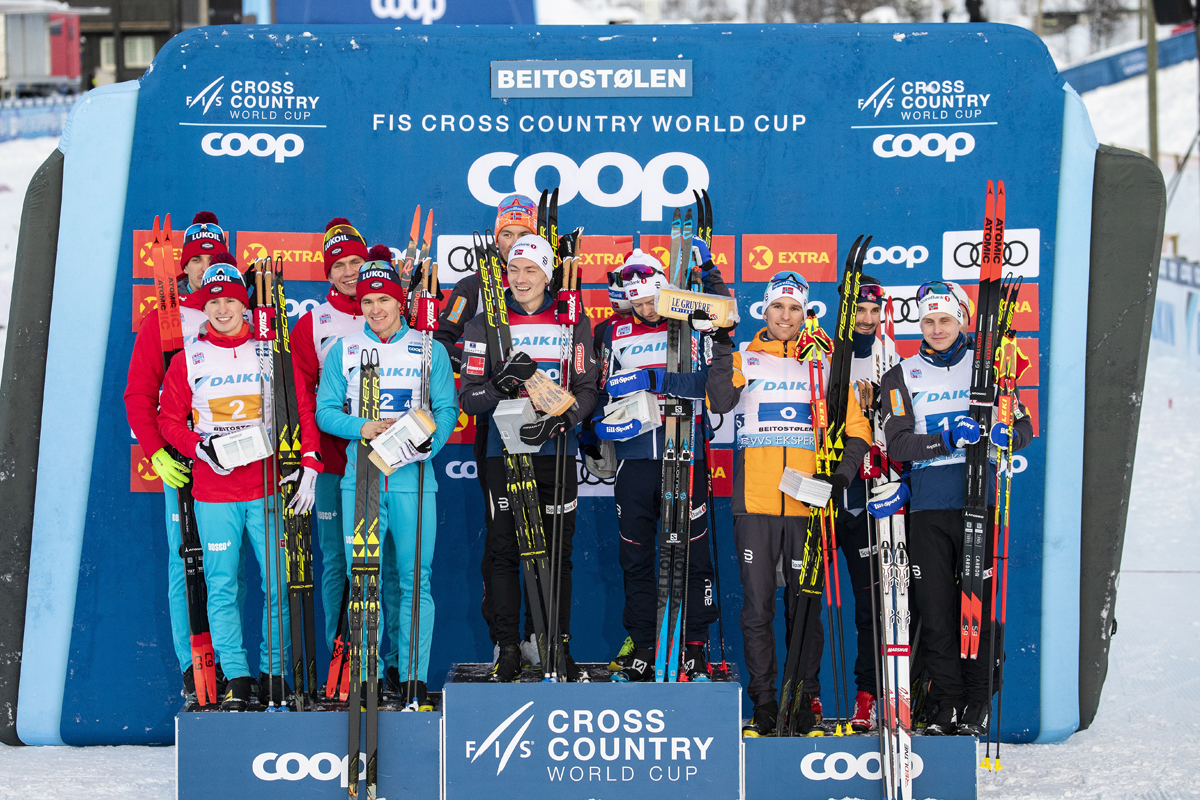 As Emil Iversen took command of the field from the gun during the men’s relay in Beitostølen, Norway, striding smoothly up the first climb in the lead, the question quickly became, can anyone take down Norway?

The team of Iversen, Martin Johnsrud Sundby, Sjur Røthe, and Finn Hågen Krogh must have liked their odds. Norway has claimed eight of the last nine men’s relay victories on the World Cup, falling only to Russia in Lillehammer’s 2013 men’s relay. Norway’s last time missing a podium in a relay occurred in 2007. While historically, the race has been a 4 x 10-kilometer event, the men’s relay on Sunday consisted of four 7.5 k legs. 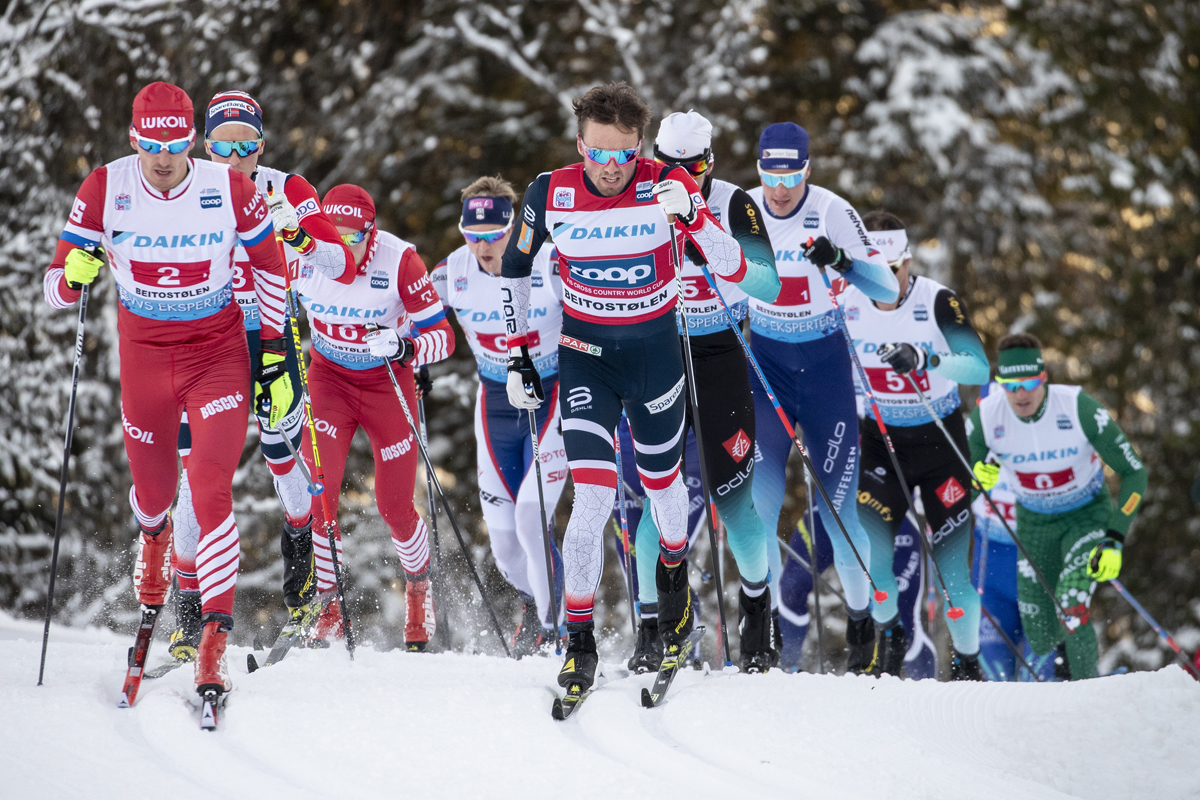 At the first exchange, Iversen had a sizeable lead over second place Norway II team, who tagged 7.7. seconds back. Russia 1 came through with a gap of 16.1 seconds. The first leg of the relay, called the scramble leg, most often doesn’t break the pack apart. It’s part gamesmanship, part high-tempo effort to shake off any non-contenders.

Norway II fell off the back, tagging off 33.7 seconds back.

Røthe, winner of   Saturday’s 30 k freestyle,  kept Russia’s third leg skier, Denis Spitsov in his sites. The Spitsov-catch was a smooth reel in for Røthe before the end of their first lap. It became a lead-out back and forth, each skier trying to create a gap before the last leg. Neither team could mount a sufficient move to gain time.

At the final exchange, Norway was Russia’s heels, trailing by a mere 0.4 seconds. Third place Norway II was a distant 50 seconds behind the leaders. 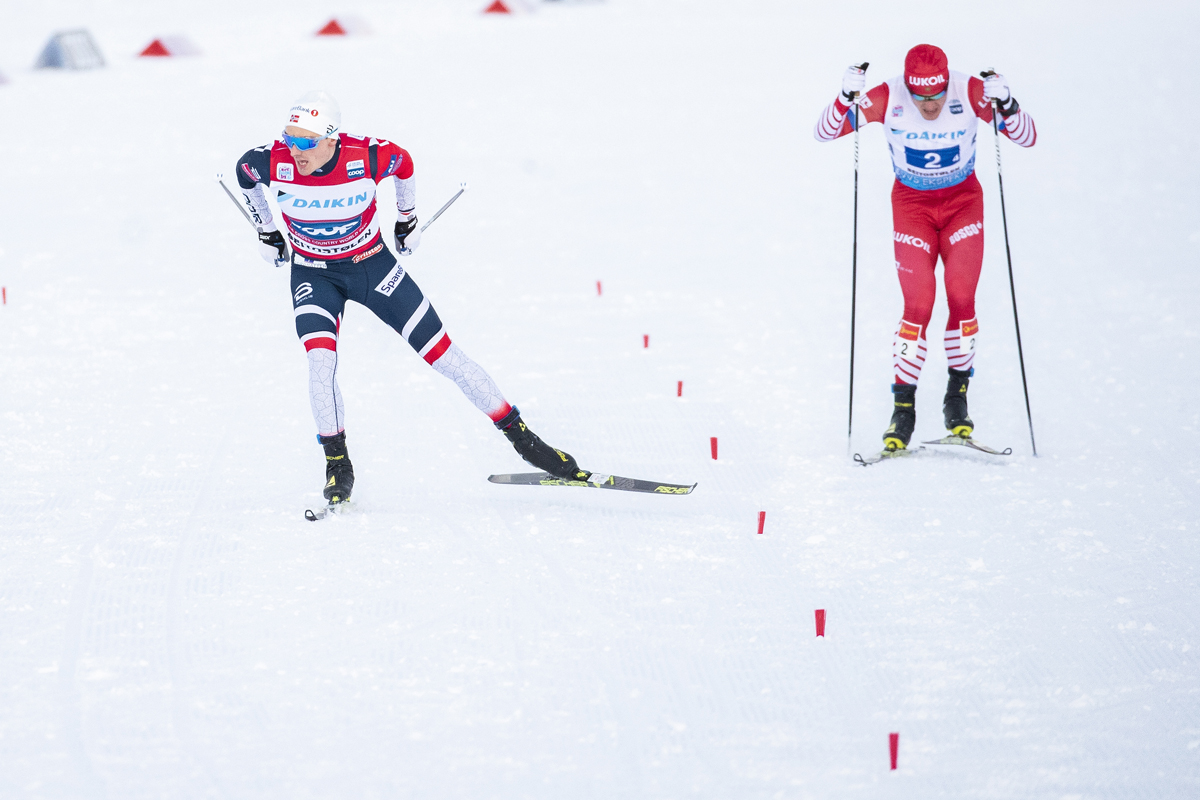 Norway’s Finn Hågen Krogh is the master-closer. Here he crosses the line for first place over Russia’s Andrey Melnichenko in the men’s 7.5 k relay in Beitostølen, Norway. (Photo: Fischer/Nordic Focus)

Krogh, who has a history of being a strong closer, stayed calmly on the heels of Russia’s Andrey Melnichenko, matching his pace on climbs and tucking into his draft on descents. As the tempo accelerated for the final kilometer, Krogh edged around Melnichenko at a turn and held off the Russian through the final moments of the race. In the final stretch, it was clear that Krogh’s strategy had paid off as he glided through the finish with Melnichenko 0.7 seconds behind.

“We are used to the tough race against Russia now,”, Sundby told the International Ski Federation (FIS) at the finish. “For the last relays, it has been the same way. They have a really strong team, with different skiers, but every time they have four strong guys. Same procedure today. Today we have back our last leg finisher with Finn [Krogh] and it was really nice for everyone to see him back in good shape. I think the last time was Lahti [World Championships in 2017]. And he’s back again now. So, it’s good for us and we hope for a nice race against for sure Russia.”

While the podium positions seemed to be locked up early on, the remaining top ten positions were in contention as a large chase pack had formed behind the leaders. During the first leg, the U.S. Ski Team’s (USST) Erik Bjornsen was in the mix. At times Bjornsen led the chase pack. In a tightly packed group, Bjornsen tagged off to Kevin Bolger in fourth position, 33.1 seconds back. 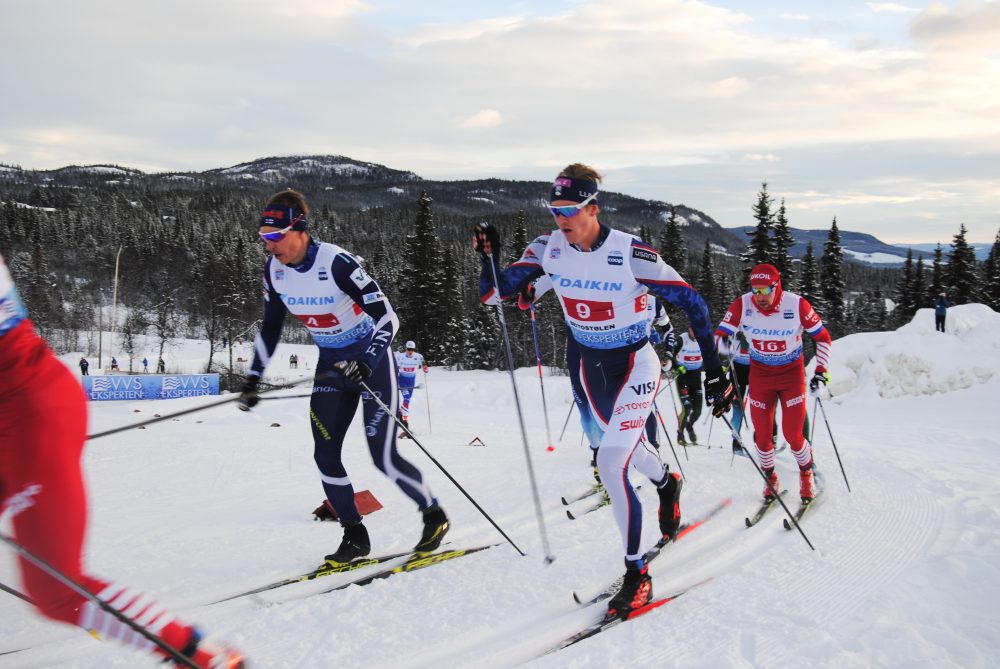 “It’s always fun to do a relay with the boys, so it was a good day, working out the cobwebs and getting ready for Seefeld,” Bjornsen told FasterSkier at the finish. Bjornsen was happy with his classic leg. When asked how he felt, he expressed, “Just great! It was really fun! Good crew out there.”

“On the men’s side, all four of our guys took a step forward today,” Matt Whitcomb told FasterSkier in an email. “While Erik isn’t quite in form yet to stay with the break, he controlled and drove a very competitive chase group. His performance was impressive.”

Bolger, the leg skier for the U.S., maintained his position in the chase pack for his first lap. He skied through the exchange/lap zone in ninth place. As the decisive moves were made, Bolger could not maintain pace. The group split in two, and he fell back with the second chase pack.

“Unfortunately, the relay is a contact game, and we lost that late in the second lap,” said Whitcomb. “Kevin dug deep, and was so close to keeping contact over the top of the last big climb, but once it opens slightly, it tears open.”

“I’m happy with it,” said Bolger about his leg. “I wish I could’ve stuck together with the guys all the way through the finish but just to stick in and ski with some of those guys was good… I wish I could’ve skied it harder toward the finish, but I just got tired, went out a little hard maybe, but overall I’m happy, a lot of takeaways, so I’ll learn a lot from it.”

Scott Patterson took the first skate leg for the U.S., skiing with Italy and Sweden in the second pack. He tagged off to closer Simi Hamilton (USST) in 12th position, with a 2:19.6 minute deficit to the leaders.

“It was pretty good,” Patterson reflected on his race. “Kind of had a slow start to my season, today felt pretty good, skiing with Italy and Sweden, able to hang pretty well, so it was a fun one. … With these short relays, it’s so easy to hammer the first lap, the second is kind of hang on, and that’s a lot of what it felt like today.”

When asked how the 7.5 k legs, compared to the traditional 10 k distance, affected their pacing during the race, Patterson was adamant that the shorter course was an added challenge for distance skiers.

“Absolutely harder,” he said of the change. “We’ve had so many 15k’s that you’re kind of used to that pace, and this is… I mean for me, it’s almost sprint qualifier pace. You just gotta’ go and hang in.”

Though Hamilton was ultimately unable to gain any positions for the U.S., he was pleased with his performance and enjoyed the relay environment as the U.S. finished 12th (+3:22.7). 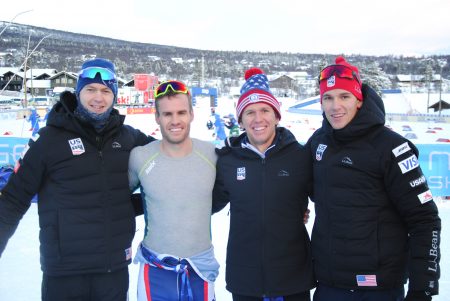 “I was happy with it,” Hamilton shared. “It wasn’t my best distance feeling ever, but it was a fun course, Scott tagged me in a great spot, just, right off of the tail of Viktor Thorn [of Sweden] and DeFabiani [of Italy] there, and those guys are really good skaters. B I tried. I didn’t really want to try to ski just dangling off the back the whole time, so I put in [a quick effort] there at the start, just to get in a draft behind them. And I feel like a relay is a kind of race where you kind of have to take the risk sometimes, especially later on in the race for the last couple of legs. So in that sense, it’s really fun. You just kind of throw caution to the wind and see what happens. But it was fun and I’m feeling like I’m kind of coming into better shape as the season progresses. I’m psyched for the sprint next weekend and everything else coming up this winter.”

“It was an impressive relay debut,” concluded Whitcomb. “Watching this men’s team fight hard for contact today made us all incredibly motivated.  I think I share the sentiment with the rest of our staff and athletes – seeing the U.S. men’s relay hit the podium in a World Cup would rival the excitement of the Olympic gold.  We’re not there yet, but we can see it from where we are. And we plan to close.”

The Canadian team did not field a men’s relay team.