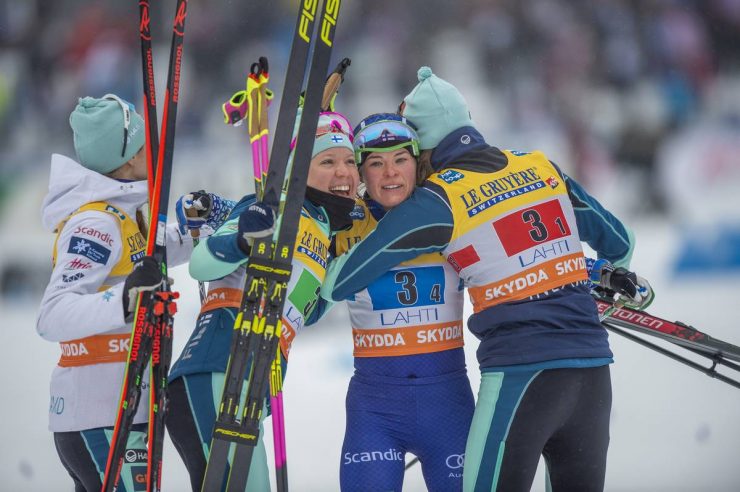 Sports fans talk a lot about home field advantage. Which team will play at home at Game 7 of the World Series? Or in the playoffs before the Stanley Cup? Home turf and the swells of a crowd whose numbers are skewed toward the home team has an undeniable effect.

Yes, the Norwegian team of Tiril Udnes Weng, Ingvild Flugstad Østberg, Therese Johaug, and Heidi Weng won yet another 4×5-kilometer relay with a time of 50:04.8. As this makes 16 straight wins on the World Cup, perhaps the result no longer grabs our attention or piques our interest.

But what should spark you to continue reading is the news that the Finnish team of Johanna Matintalo, Kerttu Niskanen, Laura Mononen, and Krista Pärmäkoski earned the first ever World Cup relay podium for their country on home soil, finishing 30.3 seconds behind Norway.

For the first two classic legs of the race, not only were the Finns vying for the podium, there were making a go at the win.

Kerttu Niskanen (FIN) is tailed by Frida Karlsson (SWE) during the second leg of the 4×5-kilometer relay in Lahti. (Photo: NordicFocus)

At the end of the first leg, Matintalo had a small gap to the Norwegian, Swedish, and Russian teams. Niskanen continued to hold this lead at the end of the second, but Sweden was only a second behind. Norway exchanged a few seconds later, and Russia appeared to have fallen off the pace.

Then Johaug skated away with the reins . A few seconds was nothing for the powerhouse, and she was in the front within the first kilometer. But Mononen was not willing to let her go. She matched Johaug in the first climb as the spectators lining the course shouted her name.

Mononen began to fade, but her decision to hang onto Johaug’s ride as long as possible kept her well ahead of the other teams. 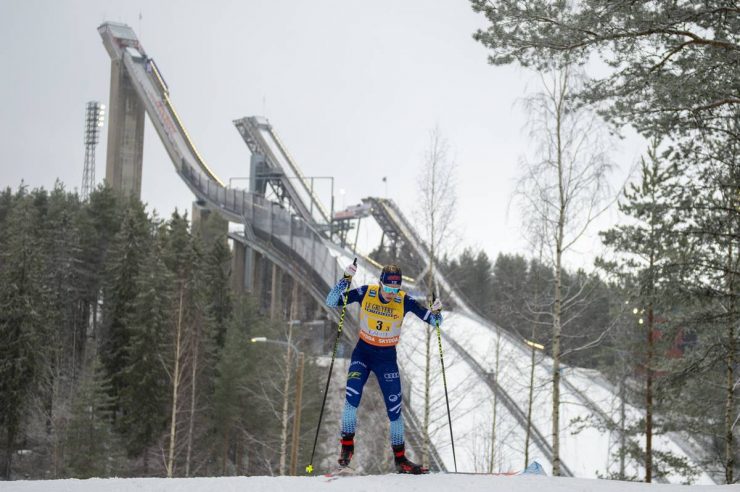 In the fight for the third spot, Russia’s Ekaterina Smirnova closed a gap of nearly 30 seconds to Rebecca Ӧhrn of Sweden, moving into third position by the end of the lap. The German team had also made contact, making it a three nation race for the final podium spot.

Mononen tagged Pärmäkoski with roughly a 29 second deficit to the Norway’s anchor, who did not treat her leg like a victory lap. Heidi Weng hammered each of the five K’s, but she could not put additional time on Pärmäkoski. 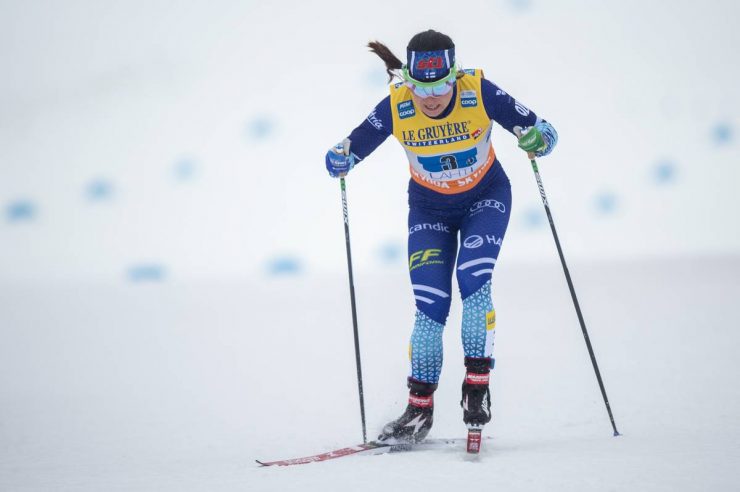 The Finn, who clearly came back on form this weekend, kept the margin constant as she made her way up and down the hilly wooded terrain, past waving fans chanting “Kris-ta! Kris-ta! Kris-ta!” in time with her steps.

As she made her way down the final stretch, Pärmäkoski saluted her fans in the stadium who were applauding a job well done. 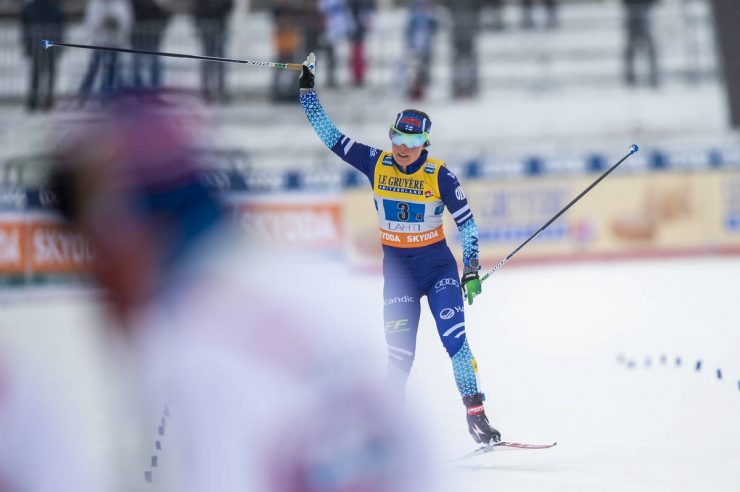 Waving to the home crowd, Krista Pärmäkoski seals the deal on second place in the 4×5-kilometer relay in Lahti. (Photo: NordicFocus)

Kirpichenko flew down the final descent in a tuck and curved into the straightaway in the lead, but the Swedish sprinter was right on her tails. Firing her afterburner, Dahlqvist moved alongside the Russian in the final stretch, clearly demonstrating superiority in sprinting. As the line drew near, the women threw their boots in unison, but the surging Swede was there first, if only by 0.1 seconds. 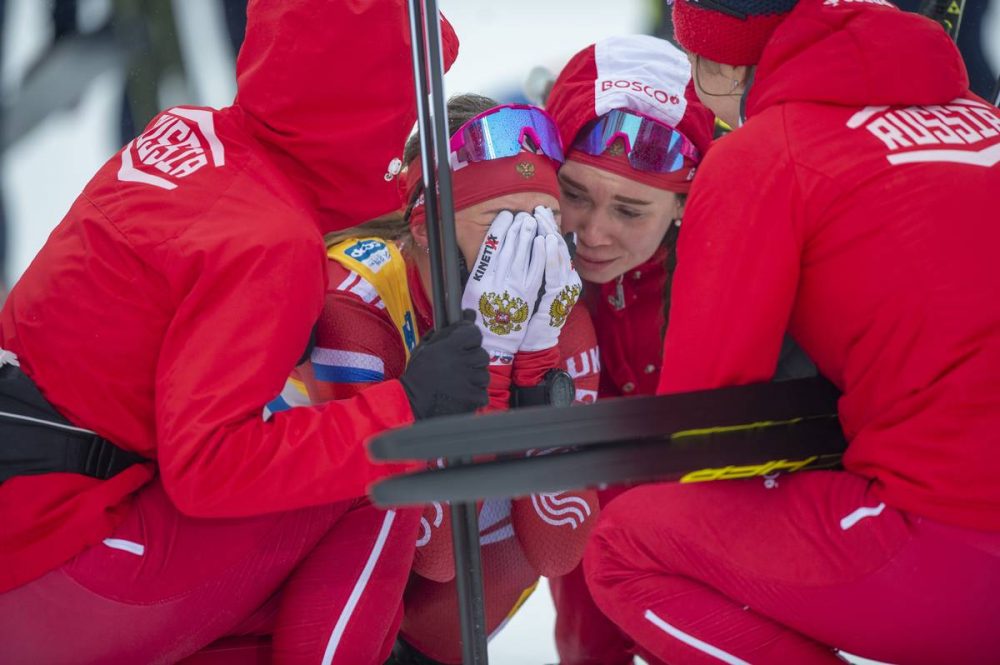 An emotional Yana Kirpichenko is consoled by her teammates after the Russians finished 4th in the 4×5-kilometer relay. (Photo: NordicFocus)

During the race, lightly falling snow turned into misty rain, posing a challenge for the waxers. Therese Johaug fielded the FIS interviewer’s question of how this impacted their team.

“I had really good skis,” she stated. “Of course, it’s difficult conditions when the snow comes. Maybe Ingvild did not have so good grip out there, but she fought all the way. I’m so impressed with both Tiril, Ingvild, and Heidi today, and it is so fun to race a relay with the team you’re training so much with.” 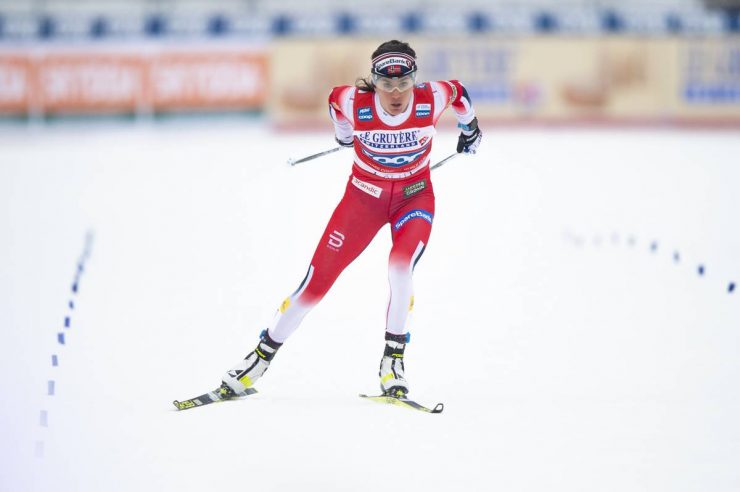 Eyes locked on the win, Heidi Weng skis the final meters of the 4×5-kilometer relay in Lahti. (Photo: NordicFocus) 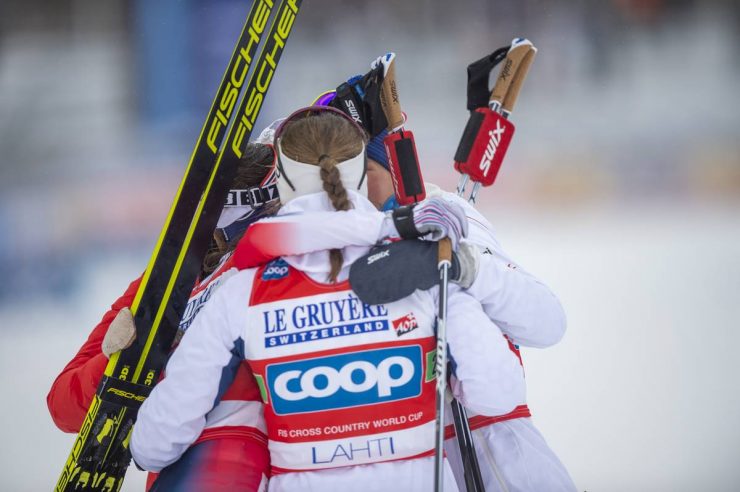 Racing continues Wednesday with an individual sprint on the streets of Drammen, Norway next weekend, followed by the famed Holmenkollen 30 and 50-kilometer races in Oslo on Saturday and Sunday. 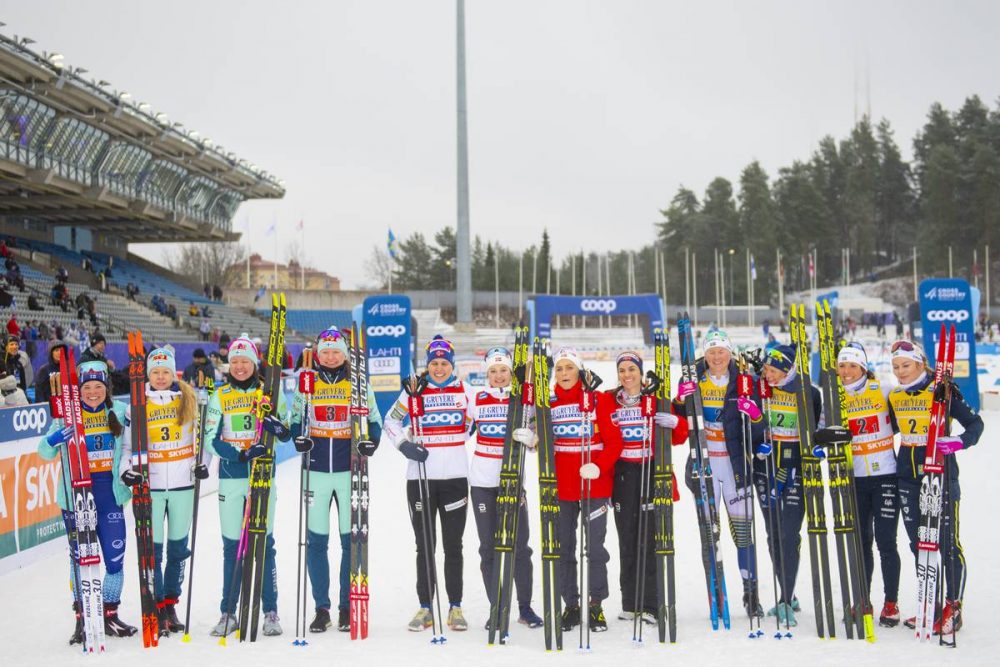 The women’s podium of the 4×5-kilometer relay in Lahti. Norway I took the win ahead of Finland I and Sweden. (Photo: NordicFocus)