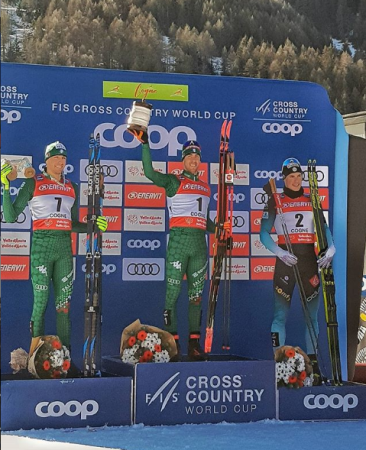 The sun illuminated the alps in Cogne, Italy, the final World Cup stop before the FIS World Championships in Seefeld, Austria. Nestled in the mountains, the Aosta Valley is home to both Federico Pellegrino and Francesco De Fabiani, who seized the opportunity to delight the home crowd. The 1.6-kilometer freestyle race was also a chance for Pellegrino to earn his 12th individual freestyle sprint victory, tying for the second-most overall for any World Cup athlete with Kikkan Randall and Sweden’s Stina Nilsson. Marit Bjørgen of Norway holds the most with a remarkable 24 skate sprint victories. 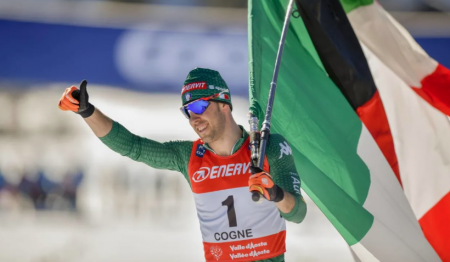 Federico Pellegrino carries the Italian Flag as gives his countrymen a thums up after winning the 1.6-kilometer freestyle race in Cogne. (Photo: Screenshot FIS/Nordic Focus)

When the heats began, it seemed that Murphy’s Law began to take effect, as numerous crashes took out many hopefuls for the final round. In the first heat, Ustiugov led the pack to a fast start, positioning himself in front through the early climbs. Pellegrino marked the Russian, staying close to his tails and maneuvering past him on a curve at the end of the course’s long descent. While cresting a roll just after Pelligrino’s move to the front, Ustiugov caught a ski and crashed, losing contact with the remainder of the men in the heat.

From there, Pellegrino took control through the finish, leaving himself time to stand up before the line. Behind him was a close fight for second place between Baptiste Gros of France, Russell Kennedy of Canada, Mathias Rundgreen of Norway, and Karl-Johan Westberg of Sweden. Gros took second, while Westberg and Kennedy were eventually able to advance to the semifinals as lucky losers thanks to the heat’s fast times.

In Hamilton’s quarterfinal, the fourth of five, a tangle between Jouve and Alexander Bolshunov of Russia took place just in front of the American, who had tucked himself in toward the back of the pack for the first half of the race (Bolger had been slated to race Quarterfinal 4, but did not start). Luckily for Hamilton, he was quick on his feet and dodged their skis as he maneuvered between them unscathed, moving into second position amidst the men left standing. With a hard press back to the pack from Jouve it was the American and the Frenchmen in a duel to the finish behind Sweden’s Marcus Grate. Grate took the quarterfinal win, while Hamilton snagged the automatic advancing spot by 0.1 seconds ahead of Jouve.

“I think the course caught everyone off guard,” Hamilton explained. The course itself featured a single long climb long sweeping descent and a few gut punching rollers before a sharp corner to the finish.

“At least for the guys especially, I think people thought it would spread out a little bit more because it was kind of a longer course and the first climb was so long and such a grinder climb that I think people thought that it was going to spread out and that there would be less contact because of that. But really, it’s pretty crazy, I think almost every men’s heat, especially I think in the quarter and maybe the semis, definitely had a lot of bumping and some crashes.”

Bolger’s decision to sit out the quarterfinal stemmed from his focus on races to come at World Champs. He told FasterSkier in an email that he has been battling a cold and wanted to be conservative to ensure that he is in top form during the sprint in Seefeld on Thursday.

“I’m feeling great this afternoon and looking ahead now to the sprint at World Champs!” he wrote. Bolger ended the day in Cogne in 30th.

In Semifinal 1, Kennedy led the group through the first half of the course, with Pellegrino, de Fabiani, Gros, Chavanat and Sondre Turvoll Fossli of Norway tucked in patiently behind him. Pellegrino took charge in the second half as he skied to the win, spreading his competitors out behind him. Just behind, in a fight for second place, Chavanat outsprinted De Fabiani, with Fossli taking fourth.

Kennedy ended his day in 12th, his career-best result in an individual World Cup event (at the time of publication, FasterSkier had not received comment from Kennedy).

“I felt very good from the beginning of the day,” wrote Kennedy in an email. “I got some good insight from Alex Harvey before the race and did a good job executing what he had suggested! Was super excited after the qualifier.

“I haven’t been know for my finish, so my strategy was to get as many lucky loser spots as possible,” Kennedy explained. “I picked a hard quarter and then went for it to try to make a fast heat in the semi. It was a good strategy but I didn’t have quite as much as I had hoped for in the end.”

In Semifinal 2, Hamilton relied again on patience as he tucked in toward the back of the group through the first half, slowly moving ahead in the final 600-meters. Toward the end of the long descent, yet another crash took place as Jovian Hediger of Switzerland tangled skis with Håvard Solås Taugbøl of Norway and Tom Mancini of France. Marcus Grate of Sweden took the win with Hamilton just behind. As the first heat ended up much faster than the second, both De Fabiani and Fossli advanced to the final as lucky losers.

While there were no crashes in the final, a problem with Pellegrino’s pole spiced things up for the Italian sprint specialist in his quest to win at home. Heading up a hill in V1, as his arm swung forward, he suddenly no longer had a pole attached to the strap on his right hand. Impressively, the Italian did not lose any momentum and continued up the climb where he was handed a new pole which he calmly exchanged without losing his position in third.

He stayed tucked in behind Chavanat and De Fabiani as the three began to separate themselves at the front. Pellegrino surged at the last climb to position himself for a close fight in the final stretch. As the trio of men powered through the straightaway, Pellegrino pulled away from his opponents throwing his arms up in celebration as he crossed the line in first, stopping the clock at 3:09.01. De Fabiani took second (+0.48) besting Chavanat in third (+0.51) by 0.03 seconds. Hamilton landed just off the podium in fourth (+3.91), followed by Fossli in fifth (+4.03), and Grate in sixth (+27.90). 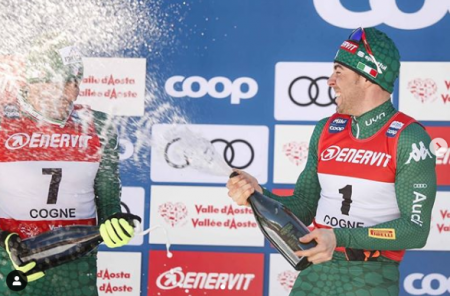 The crowd of Italians cheered as Pellegrino and De Fabiani congratulated each other with an embrace at the finish. In his interview, Pellegrino thanked his countrymen for their support.

“They gave me a lot of pushing,” he told FIS. “I needed this before the World Ski Championship, I tell them to come, and I see that a lot of people came.”

He later added, “Today was difficult to focus but I needed this energy by my people, by region, my valley, because I know now that when I go to Seefeld I have the responsibility to give everything that I can.”

From crashes to illness, Hamilton has had several strokes of bad luck this season. Saturday, things turned around for the 31 year old.

“I’m psyched for sure,” he told FasterSkier in a call. “I feel like I’ve been really fit this year and fast and I haven’t really had a great opportunity to show that. I had some frustrating races in the Tour and stuff, so it felt really good to kind of finally be able to put all the pieces together.”

Sitting above 5,000 ft in elevation, Cogne is one of the higher courses on the World Cup. However, it is still nearly 3,000 feet below Hamilton’s hometown of Aspen, Colorado.

“The conditions were kind of right in my wheelhouse with a little bit of altitude, fast cold snow, and bluebird skies, and being in the big mountains made me pretty happy,” he said. “I think it’s a great sign leading into World Champs and I know that I’m really fit right now. Training the last month has gone really well and I’m just psyched to be able to hopefully put together another good one in a few days [in Seefeld].”

Hamilton is known for being an agile skier, which was certainly to his advantage given the number of mishaps in Saturday’s event. In both the quarters and the semis, Hamilton’s early patience positioned him to avoid any hang ups. While his positioning was part of the plan, the way things played out was unforeseen. 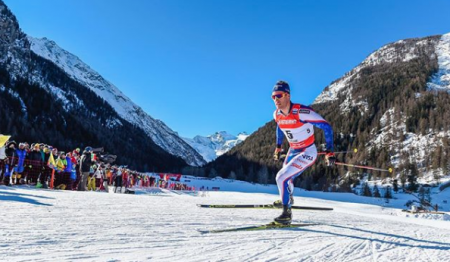 Simi Hamilton skis past a stunning backdrop on his way to a fourth place finish in the 1.6-kilometer freestyle sprint in Cogne, Italy. (Photo: Nordic Focus / Instagram screenshot @simihamilton)

“In my quarter, my tactics were to try to ski that whole first climb really kind of relaxed and I knew I probably wasn’t going to be able to relax a lot if I was leading pack so I just kind of settled in closer to the back and then tried to get around people on the long downhill, but that was kind of the place where the course took everyone by surprise. I think people thought that there was going to be a lot more passing going on in that downhill and they didn’t really, it just kind of stayed as one tight glob all the way down so I wasn’t able to move up there.

“For sure, I got kind of lucky with there being that big crash with Richard and Bolshunov coming up toward the finish in my quarter and I was able to get through that unscathed,” he continued. “I still felt good at that point so I think that I would have been able to put in a good finishing sprint and hopefully moved on anyway, but it definitely helped me to be able to ski past those guys when they were on the ground and then move on that way.”

Despite the risk of ending the day early, Hamilton enjoyed the chaos on course.

“It was a good course, really fun, and I think some crashes are always kind of good because that means it’s more exciting as a sprint race,” he said. “I think people are more psyched to watch a race where there’s some bumping and grinding, it’s always much more fun to race when it’s kind of like that anyway.”