The Chiemgau Arena, a shooting range with paved rollerski loops just outside of Ruhpolding, Germany, is a venue unlike almost anything in North America, with the exception perhaps of a few former Olympic sites. And even if Soldier Hollow has nice rollerskiing, too, Ruhpolding has a bit more: other teams, for one, but also spectators who show up even in the summer just to watch some of the world’s top biathletes train.

Here are a few of our photos from a morning of training earlier this week, when the U.S. national team and the National Guard team joined three German groups as well as the Ukrainians to use the range for a workout.

Two members of a German junior team run through the range as part of their foot-based shooting combination workout. 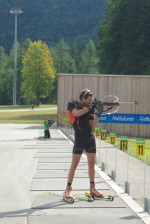 Leif Nordgren on the range. 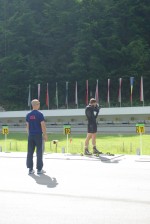 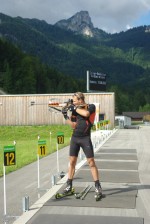 Lowell Bailey on the range. 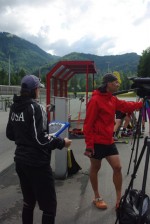 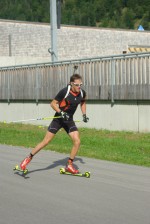 Leif Nordgren doing one of the ten speeds in his workout.

Susan Dunklee (front) and Sara Studebaker click their magazines into place before a prone stage.

Spectators show up to the Chiemgau Arena even in the summer! 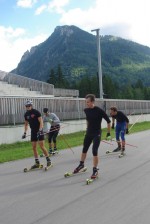 German men ski past, cooling down from a sprint workout. 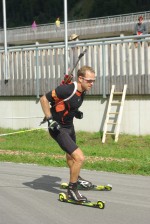 Lowell Bailey in the midst of a speed. 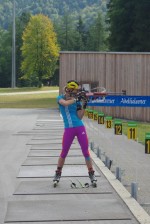 Annelies Cook in a standing stage. 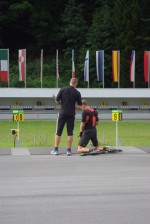 Per Nilsson checks in on Lowell Bailey after a prone stage. 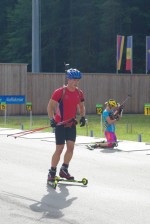 Jake Dalgren of the National Guard skates through the range.

The view from the end of the range into the mountains. 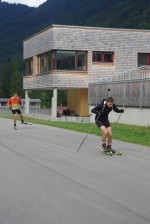 Jay Hakkinen (front) and Tim Burke drop in for a speed.

Annelies Cook lines up in prone as Russell Currier skates away.

Looking down the range at the beginning of the Americans’ training session. 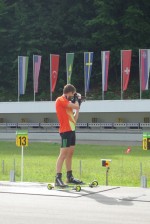 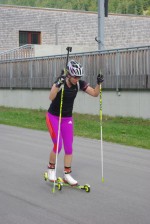 U.S. and National Guard coaches line the range; women’s coach Jonne Kahkonen holds up a magnetic board showing an athlete where their shots fell on the target. 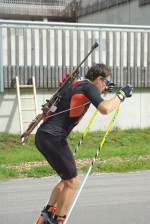 Russell Currier speeds by in front of the stadium.