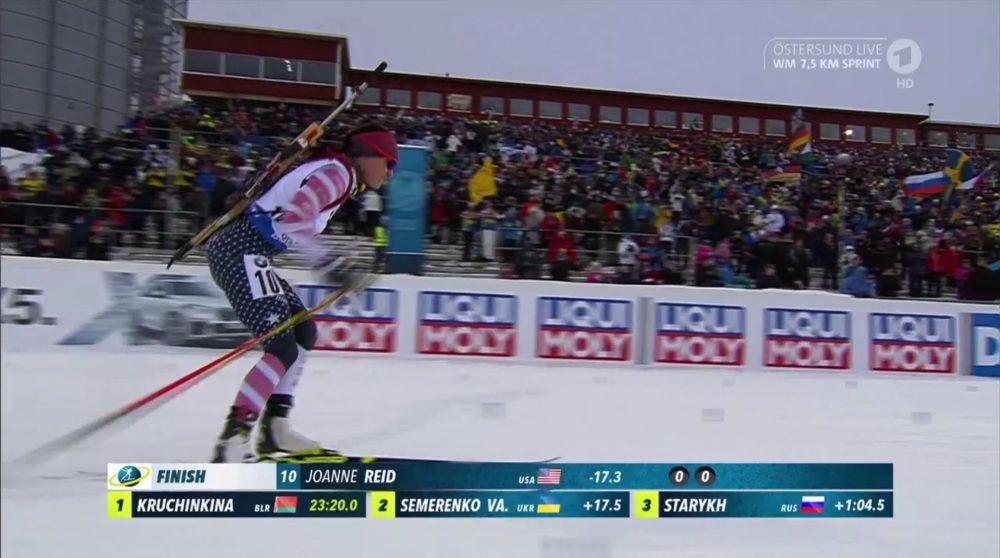 It was a good day for US Biathlon. Two skiers in the top-15 in an individual start race. Today, Clare Egan placed 11th, Joanne Reid 15th in the 7.5-kilometer sprint at the IBU World Championships in Östersund, Sweden. It’s a big stage and it can come with big nerves and expectations.
Here are the emails we received from Egan and Reid respectively after the race.
“I’m really happy with my race. It’s always a thrill to perform your best when it counts. It takes a full team effort, from the wax techs to the sports psychologist, and the athlete’s job is to put the pieces together,” Egan wrote. “I may have more gray hair than most (all?) of the other athletes out here but I finally know what I’m doing and I have to say, it’s really fun. You should all start doing biathlon now.
“With Joanne’s big PR of 15th place, this marks the 2nd time this season that we’ve had two women in the top-15, with three different athletes. In Sunday’s pursuit I’ll be starting just +:33, and Joanne is right behind me, so anything is possible for us. Watch!”
For Reid, her personal best came on a day when she says she consumed coffee. In the past, she has claimed giving up her beloved morning drink was one method to calm the senses and become a better shot.
On how the day went generally.
Joanne Reid: A lot of my work this year has been redesigning my races from what I call momentously, horrifyingly slow-starting but accelerating into reasonable, into an entirely reasonable speed all around.  I’ve focused on this course and this shooting for what feels like a long time, but has probably only actually spanned about a week or so.  It climbs out of the start, has a lot of transitions, and the conditions were really slow today (because apparently grooming is not nearly as awesome as just having your twelve volunteers directly shovel the excess snow from the race course to the woods).  Two of those are really great for me, so the transitions were my main ski focus for the day.  That and some terribly uninteresting angle of my right pole that serves nothing but to bore the reader into slumber.
Thoughts on shooting.
JR: Östersund likes to hammer us with wind, and it likes to do so in a playful, mischievous manner.  The training days were calm and sunny, without a whisper of wind, but race day was a snowstorm with wind that switched directions and intensities and danced around the range like a prima ballerina.  This is generally an advantage for me because I have the ability to slow down and shoot more accurately.  Some people only have one speed and one way of shooting, and that’s a strong and capable tactic in itself, but I have accidentally acquired many different speeds at varying levels of accuracy, and sometimes it helps more than it hinders.  So, that’s what I did.  Across the field you can actually see this happen, prone shooting times will slow down in tricky wind conditions like this.  My coach (Armin Auchentaller, who is a new and very beloved addition to the women’s team) very specifically told me to shoot with accuracy today, because he knows I can do it, and because my zero was jumping around like a cricket on acid.  Eventually we gave up and just decided I should aim at the middle and pull the trigger gently. … However, you have to couple it with your luck, which you (this will come as a huge surprise) have absolutely no control over.  I happened to get a wind in prone that only came from one direction, but Susan got unlucky with a changing one.  Just the way the dice fell.
Senses during the last shooting round?
JR: I’ve had an easy time shooting standing on this range (SO FAR), my setup and natural point of aim fall perfectly onto target very well this week.  If you get a beautiful sight picture, you take the shot, it’s as simple as that.  For my last shot, I had to fight for it a little- which is what I’m calling that moment where I realized I held my breath too long, thought I was going to pee myself, decided I better breathe, breathed, remembered I still had a target to hit, hit the damn thing, and then left.
Thoughts on how she might finish after cleaning her second shooting stage (she was an early starter and didn’t miss a shot today).
JR: Our staff clearly has some agreement that you never hear a split until the last lap so that you don’t go into a cardiac arrhythmia. (This is a much more hilarious joke if you follow the history of my heart at all). Also, because I was such an early starter, the split was somewhat meaningless.  Telling you that you’re winning out of ten people, only one of whom I knew (the delicious Megan Bankes), isn’t entirely a lot of information.  However, for a whopping twenty seconds, until Tiril crossed the line, I was actually winning the race, which…. well, that’s a cool feeling no matter how you slice it.  As part of my race redesign, we are trying to figure out why my last lap is so much better compared to the field than the beginning of the race.  Happened again today, and I have no answer.  But- and this will come also as a huge surprise- racing is very tiring, and therefore the last bit before you finish is also quite tiring.

Highlight of the day.
JR: Skiing by the very soft and fluffy snowed penalty loop and NOT HAVING TO GO IN IT!
Low-light of the day.
JR: Not having a fourth teammate to start on the line with today.  Next year!!!!  We are pulling our way back into the rankings like you wouldn’t believe.  Top 15 ranking is important because it means that we can zero in the prone lanes on individual races, we can start four at world championships and world cup, and because it marks the beginning of a new era.  I assume we’ll name our era after our coach because he’s awesome (just look how fast Clare has turned into the champion she always could be!), but if there are any era-namers out there, please message me.
JR: Exciting exclusive of the day: I gave up giving up coffee.  It sucked- I’m over it.  Coffee is amazing.  The little black dots turned white anyway.  COFFEEEEEEE!
Tags: 2019 IBU World Championships, Clare Egan, IBU 7.5 k sprint, Joanne Reid