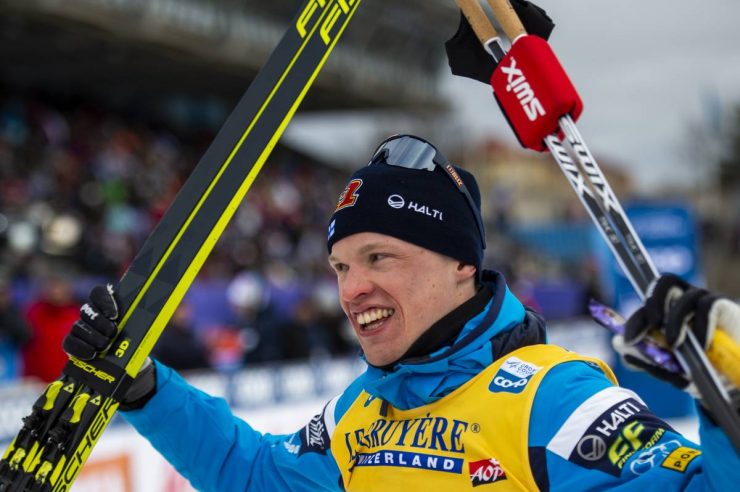 Some patterns in Lahti, Finland remained the same as it ever was: the top-11 positions in the men’s 15-kilometer classic were populated by Norway and Russia except for a lone Finn. On manmade tracks laid down through the snow-free woods of Lahti’s famed stadium, Iivo Niskanen stuck to his roots.

When the World Cup comes to Finland, Niskanen remains the king of the 15 k interval start classic. Prior to Saturday’s race, the twenty-eight-year-old Niskanen had won four World Cup races, all 15 k classic events; three in Ruka, Finland, and a win in Otepää, Estonia.

Over the entirety of the Lahti course, the home fans, and their hero, were in the fight. Starting in bib 38, Niskanen went unrivaled for much of the day as skier after skier was unable to knock him from the leader’s chair. Yellow bibbed as the leader of the overall World Cup and the day’s 60th starter, Alexander Bolshunov ultimately was the only athlete to challenge the seemingly unchallengeable Finn in his niche. 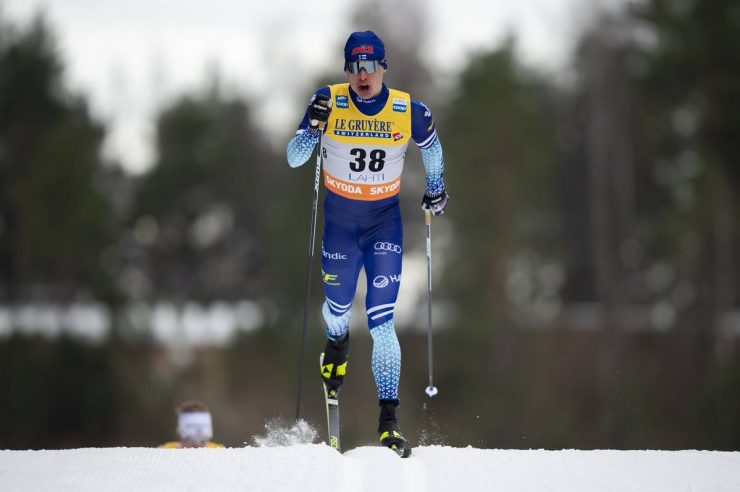 Meter by meter until it adds to 15 k. Iivo Niskanen striding for the win in Lahti, Finland. (Photo: NordicFocus) 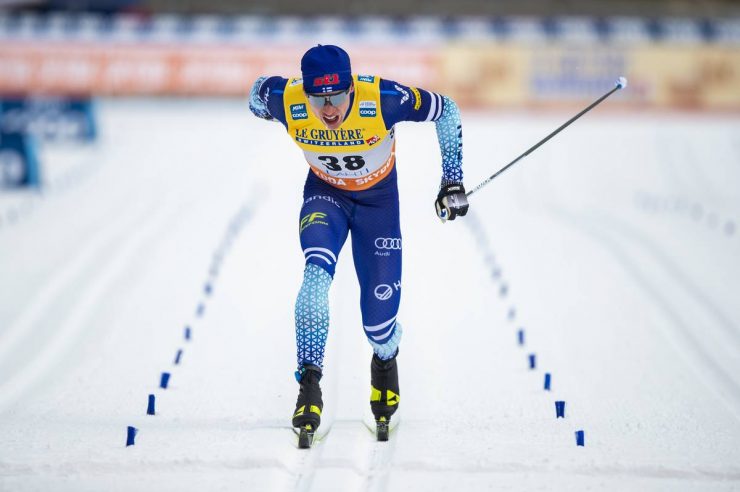 At 5 k, with the knowledge of Niskanen’s pacing strategy, Bolshunov clocked a crisp tie of 10:33.3 for the split. Meter by meter, the striding and double poling put Niskanen ahead by only 4.7 seconds at the 10 k mark. Although a supreme closer, and certainly the cream of the crop for this year’s distance World Cup, Bolshunov ceded precious time to Niskanen as the race progressed. Just over seven seconds at 11.5 k, became 10.1 seconds at the finish. Niskanen won in 32:15.5 for his second World Cup win of the season and the fifth of his career. 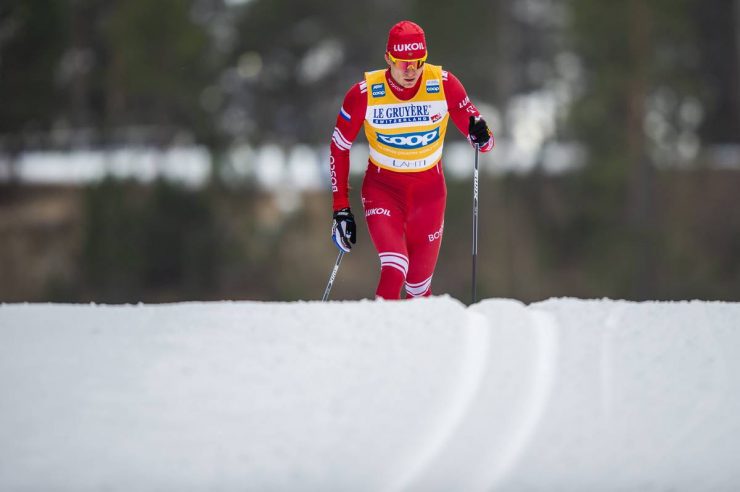 The king of the 15 k classic in Finland remains the king  Let the record skip once again; all of Niskanen’s wins on the World Cup have come in the 15 k interval start classic. Also of note, and along this theme, Niskanen won the 2017 World Championship 15 k classic here in Lahti – record skip, repeat.

“I waited this race a lot since Ruka and of course today I had a really nice day and it went the way I hoped for,” Niskanen told FIS after the race. But I have to say that we had a lot of pressure from the Finnish media talking about our service team and that we were struggling with our skis. But there is no fight and nothing between us and I want to say that this victory goes to a big part to our service team as I had extremely good skis today and so they showed that they are still number one in the World Cup circus at their job. It’s been also a lot of cheering out there and it was a little bit like when I won the World Championships three years ago.

“It was like usually here in Lahti where we have raced many times so it was easy to make tactics before the race and it was like I expected. I started not too hard and skied the easiest parts fast and I expected to ski together with Bolshunov in my second lap. I saved a little bit of energy behind Bessmertnykh so I was quite sure in the finish that the beginning of the last lap was fast enough to win this race.” 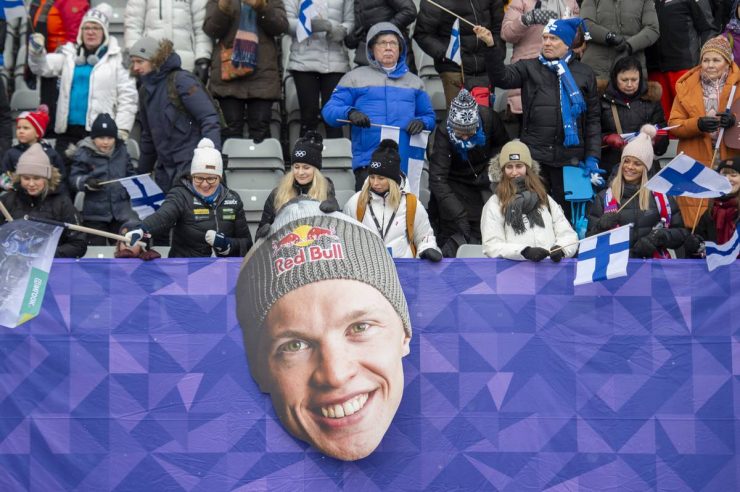 The fan favorite in Finland: an image of Iivo Niskanen during the 15 k classic in Finland. (Photo: NordicFocus)

With his second place, Bolshunov commands the overall distance standings with 1145 points – Norway’s Sjur Rothe, the winner of last week’s Ski Tour 2020, is second with 776 points. Niskanen is third with 766 points. The Russian also leads the World Cup overall with 2028 points, with Johannes Høsflot Klæbo in second with 1563. Klæbo placed eighth (+54.7) in Saturday’s race, falling just a bit further back in the overall standings. 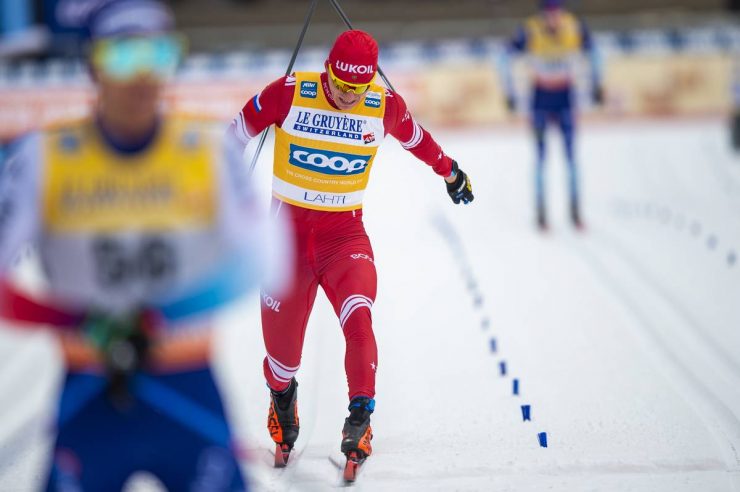 “I am pretty happy with the second place today because its a small gap to Iivo today,” said Bolshiunov to FIS. “Maybe it’s because the gliding on the last lap was not the best one but especially after the race one week ago, I am happy that I am able to fight for the podium. The main goal was to reach Iivo and to ski together two laps but on the last lap I was by myself and that was hard work.”

The U.S. started two skiers in the men’s race, with much of the U.S. World Cup contingent recovering after the six stage Ski Tour 2020. Adam Martin of the Craftsbury Green Racing Project finished in 46th (+3:10.0). His Craftsbury teammate, Ben Lustgarten, was 47th (+3:14.3). No other North Americans were entered. 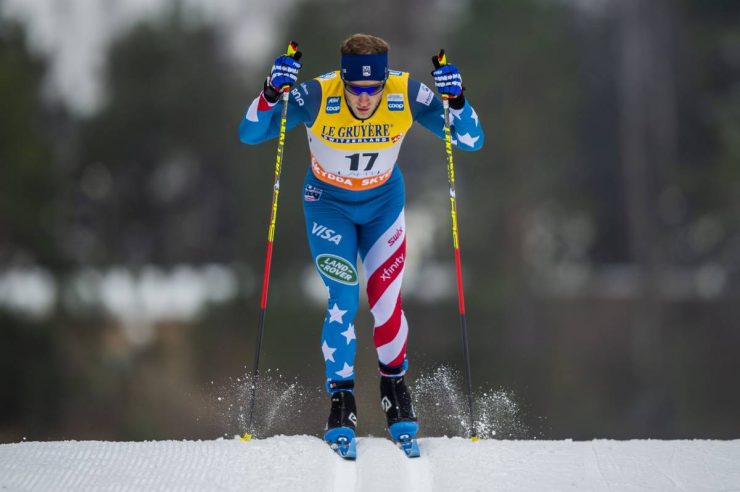 And a bit of a story behind the story, Dual Norwegian and Irish citizen – but skiing for Irleand – Thomas Maloney Westgård (24), placed 16th overall (+1:23.7) in Saturday’s race. This is his second career World Cup in the points (top-30). He placed 22nd in last season’s 50 k classic in Oslo. 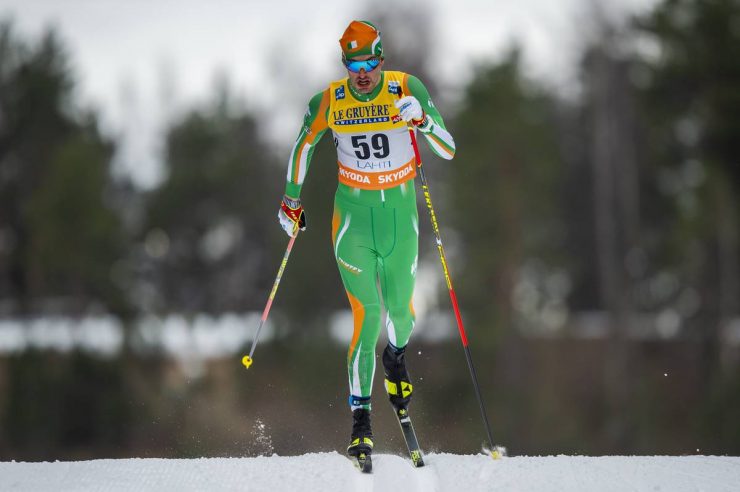 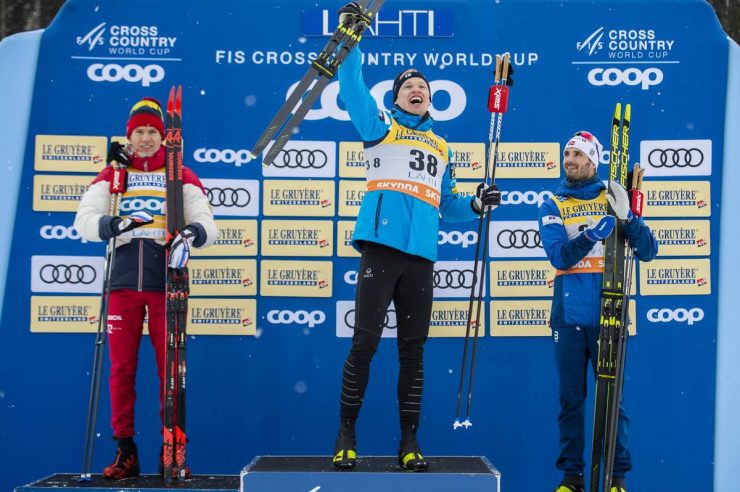