Endurance junkies can be data nerds. The market for smart watches and wearable fitness devices has boomed, trending toward a $29 billion dollar market with 243 million units sold by 2022 according to an industry analyst’s estimates. In the world of endurance sport, professional athletes and weekend warriors alike are recording their workouts and analyzing the results using platforms like Strava, Polar Global, or Garmin Connect in search of optimal training to achieve personal bests.

Depending on your sport of choice, the metrics you track in this world of modern training might vary. Skiers often train by heart rate and time, focusing on staying within particular zones during a workout. A road marathoner might focus on pace and mileage, whereas a conversation overheard between cyclists almost certainly includes some discussion of power. What is power? The simplest explanation is that power is the amount of energy output by the rider at a given time measured in watts by a power meter.

Though commercial power meters for cycling have been available since the late ’80s, their prevalence in recreational and sub-elite training has become increasingly popular over the last decade. A power meter for running does exist, but it is much less commonly used. In cycling and triathlon, the use of a power meter is claimed to have revolutionized training by reducing subjectivity and quantifying energy expenditure so the rider knows exactly how hard they are working.

A 2018 Velopress review of the book Training and Racing With a Power Meter, 3rd Ed. reads, “For cyclists, training with power is a critical part of reaching the next level of performance… Simply put, the power meter allows you to quantitatively track your fitness changes, more easily define your weaknesses, and then refocus your training based on those weak areas.”

In cycling, it is fairly simple to measure power. Force from the legs is delivered to the pedals, which turns the crank to drive the bike forward. Most power-meters use a strain gauge located at the bottom bracket which measures the torque applied to the crankshaft and its rotational velocity. As the data are transmitted in real time to a computer, an algorithm processes the information to provide the rider with a live reading of the watts they are outputting.

In contrast, measuring power in cross country skiing is exceedingly difficult. The movement of the body while cross country skiing is much more complex; force is delivered through both skis and poles, both of which are continually changing their orientation relative to the ground and their location in space. Motion is continually happening in all three planes; forward, vertical, and lateral.

Until recently, devices used to measure these forces and motions were only found in research settings. Scientists used force measurement plates mounted to a binding or buried under the snow to estimate the forces produced by a skiers legs, while forces exerted on the pole were measured with a sensor located in the grip. In most cases, these systems were cumbersome and each system had disadvantages that would deter or prohibit an athlete from regular use in their training. 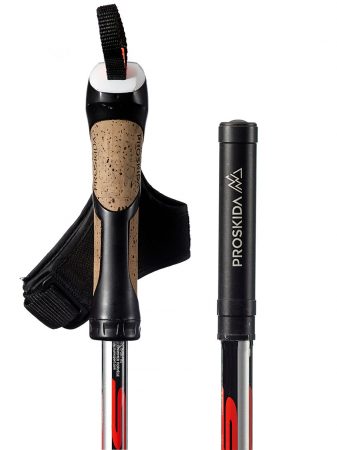 A close up look at a pair of the Proskida grip and coupler system, a power meter for cross country skiing. (Courtesy Photo)

In 2015, a small group of ski enthusiasts with strong credentials in the realm of technology and human performance set out to develop a more readily available product that could break this mold. The team included a computer scientist, a mechanical engineer, an exercise physiologist, and a dual biomedical engineer and nanotechnologist. Their innovation resulted in the creation of the Proskida grip, a sleek power-meter nearly indistinguishable from a normal pole grip.

“We’ve tried to see what the state of the art is now for wearables and sport devices and then go the next step,” stated Proskida Co-Founder Alastair Smith.

FasterSkier spoke with Smith, who is located in Canada’s Yukon, Proskida’s home base, to learn more about the evolution of the product and how it might support athletes in maximizing their potential.

“The genesis of it is that it kind of came out of the whole idea of ‘why is cross country skiing the last sport in which you can measure performance?’” questioned Smith. “If there is any sport that you absolutely need some ability to measure that is external to how hard you are actually working, it’s cross country skiing, because the conditions change so much.”

This external tool would be a contrast to the typical measures an athlete might use to track their progress during a season, such as a time trial result, a treadmill test, or a repeated interval session. The tool Proskida aspired to create would also allow athletes to quantify their performance in a training session on a daily basis, rather than just comparing various benchmarks.

While nearly indistinguishable from a normal pole grip and only about 50 grams heavier, the sensors nested in the Proskida grip collect data about the position of the pole in space and the forces being applied to the pole. The data collected are sent via Bluetooth to a phone or tablet where it can be analyzed in an app by the user or by a coach.

“We can tell the force, how effective that force is, meaning how much of that force is driving the skier forward,” explained Smith. “We can tell things like cycle rate. We can do technique identification. So we can get quite a bit of data just from those two grips.” 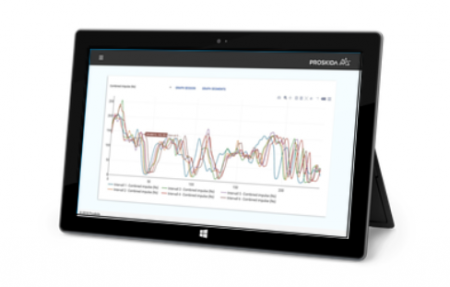 The Proskida grips collect and display the power a skier is producing while skiing. (Courtesy photo)

It is also possible to import other training data from a smartwatch into the Proskida app in order to include other analytics such as heart rate or distance. The grips are also designed to be easily transferred between sets of poles with a coupler system, making it so that a user only needs one pair.

Though the Proskida system is only collecting the forces that are going through the pole, Smith explained that they believe this is a significant measure of a skier’s overall power.

“If you just imagine straight double poling, the actual amount of muscle that is being used to double pole, it’s largely your legs,” he explained. “You’re raising your body up high [with your legs] and falling down onto your poles.”

Smith estimated that 50% or greater of force generated while skiing travels through the poles, regardless of whether the user is skiing classic or skate.

“We’ve kind of taken the approach that by measuring at least 50% if not greater of your performance through the poles, you’re that much closer to being able to understand how you’re improving over time rather than relying solely on heart rate or getting onto a treadmill or things like that.”

Another metric that they are exploring, also drawing from the world of cycling, is the use of identifying critical power, which is essentially a set of markers, in this case, watts, that an athlete can sustain for a given amount of time. This is likely something any athlete is already loosely aware of; if you ski all out, you cannot sustain that effort for long, whereas if you ski at a lower intensity, you can continue at that effort for much longer. Critical power is the number of watts that can be sustained for roughly an hour, which might be approximately equivalent to lactate threshold. 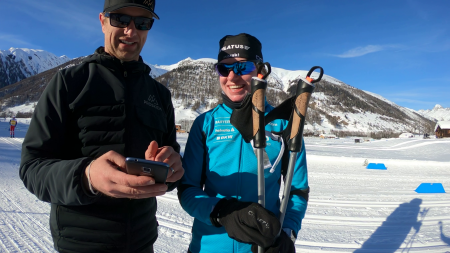 Smith explained that an athlete using Proskida grips could do a critical power test similar to what cyclists complete, then use this metric to assess where in relation to that value they are skiing during subsequent sessions. One could compare to historic or bests during a workout or train based on the percentage of watts relative to their critical power, versus heart rate or effort.

“That’s been a really, really powerful tool to be able to see how you’re improving,” he said. “Not just your technique but also your general fitness level because it doesn’t matter what conditions you’re skiing.”

Anecdotally, Smith explained that in his own use, he was able to assess much more clearly the quality of a session completed in suboptimal conditions, such as newly fallen loosely packed snow.

“I’ve noticed that even in the worst conditions, you can still determine where you are in terms of your historic best,” he said. “Whereas typically, if you ski in fresh snow, it’s just a slog and it’s kind of depressing because you don’t go as far, your heart rate is going to be up.”

At this point, the product is not yet available commercially. However, it has been tested and used by seven national teams and sport federations over the last two years. These include the French National Training Centre for Cross Country Skiing (Le Centre National de Ski Nordique et de Moyenne Montagne), the German national ski team (Deutscher Skiverband), the Canadian national ski team and the Canadian Sport Institute, Swiss – Ski and the Swiss Federal Institute of Sport, and Norway’s Olympiatoppen. Smith explained that each of these groups had slightly different interests in their use of the product and that their feedback was invaluable to the development of the analytical software and fine tuning of the system. 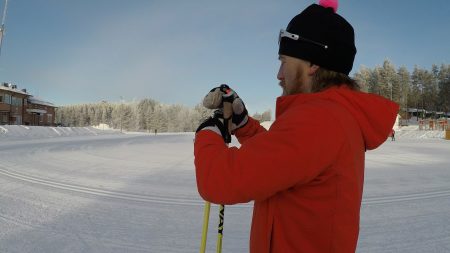 The journey to create and produce the grips has been much longer than the innovation team originally expected.

“When we first started this, we thought, ‘Okay, we’ll do the poles and then six months later, we’ll tackle the skis,’” recalled Smith. “And now, three and a half years later, we’re still refining the poles.”

The biggest challenge the team has faced has been designing software to manage the massive amount of data the grips are able to collect.

“We’re ready for production on the hardware side, but what we’ve found, is the amount of data that we can produce is overwhelming,” said Smith. “The force, the angle, angle of attack, effective force, impulse. And then with all of that, we can start getting into symmetry as well, so you can do that for left and right. So it got to a point where, without some good software, it’s quite a challenge. So that has been our focus now is to go, okay, we’re taking this data in. Let’s present it in a quick simple way so that athletes and coaches can get some sense from it.”

Smith explained that Proskida is designing software to parse the data and narrow the display to sections that are the most important, such as the period surrounding an interval session, excluding a warm up, cool down, or any large breaks. This way, an athlete is able to quickly review and efficiently compare the data that is most beneficial to their overall training. The Proskida team anticipates that the final product and software will be ready for commercial sales by 2020.