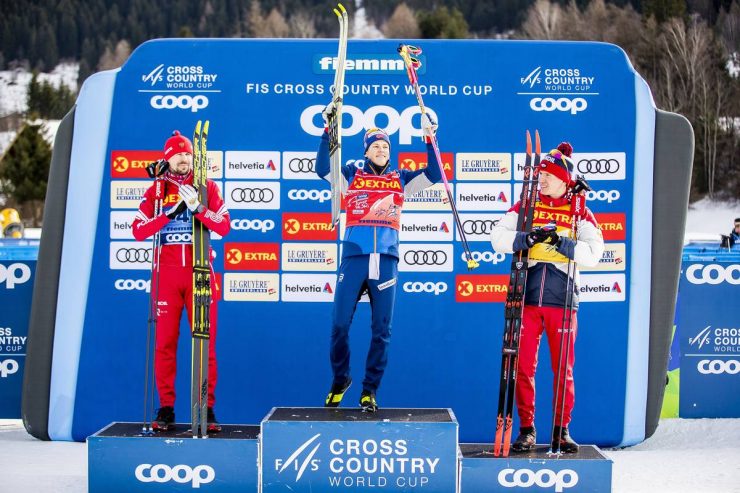 With up to 60 bonus seconds on the line in the penultimate stage and just two minutes separating the top ten in the Tour de Ski overall, every place matters in the 1.5-kilometer classic sprint in Val di Fiemme, Italy. Fighting for the top spot on the podium, Johannes Høsflot Klæbo of Norway sat 18 seconds back on Alexander Bolshunov of Russia entering Stage 6 and three seconds ahead of Sergey Ustiugov. 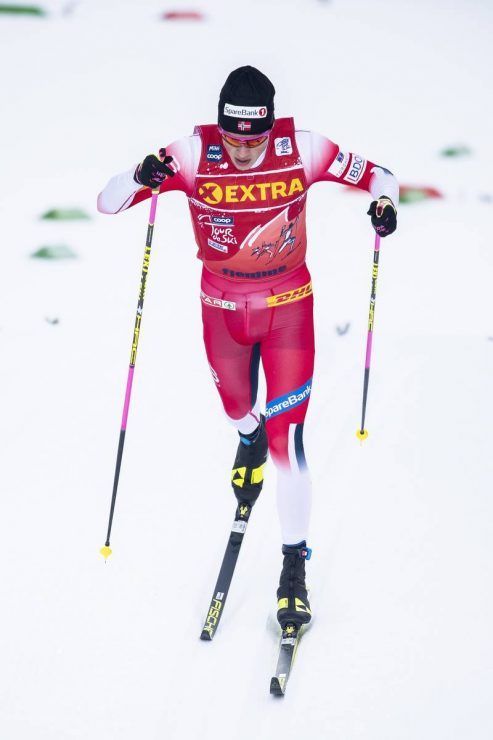 Johannes Høsflot Klæbo (NOR) set the bar high, winning the qualifier by six seconds during Stage 6 of the 2019/2020 Tour de Ski. (Photo: NordicFocus)

None of these men cracked the top ten fastest times up the Alpe Cermis in the final stage in 2019. However, Ustiugov skied over a minute faster than Klæbo, and Bolshunov out-skied the Norwegian by 30 seconds. Though Klæbo still won the overall, he entered the final stage in the lead with a 1:20 cushion. This is not a luxury he will have this year.

Still, the sprint powerhouse won the qualification round by a large margin, sending a message to the field that he was ready to fight. His time was nearly six seconds faster than second place Federico Pellegrino of Italy and roughly seven seconds faster than Ustiugov or Bolshunov, who qualified 4th and 5th, respectively.

Racing in the first heat of the quarterfinals, Klæbo sat comfortably in the back of the pack using minimal energy and staying out of trouble in the first descent of the course. Up the final climb, he exploded to the front using his signature “Klæbo-step” technique, dropping Pellegrino and Denis Spitsov of Russia. He tucked into the downhill, then powered through the final straight alone to win the heat by over a second. Pellegrino, who finished third, did not advance the majority of the race was slow-paced.

The next excitement came at the finish of the fourth quarterfinal heat. Norway’s Sjur Røthe, who sits in fourth in the overall standings and skied the fastest time up the Alpe Cermis in 2019, was at the back of the pack heading up the final climb. Racing on lightning fast boards, he moved into the mix with the leaders on the descent, creeping up behind Ustiugov who held the left-most lane in the final stretch. Skiing in the neighboring lane, Ustiugov’s teammate Andrey Larkov kept Røthe boxed into this spot.

Creating room for himself at the risk of a crash, Røthe moved into the middle of the lanes, sandwiched between the Russians. Finally, Larkov moved right, allowing Røthe to hop into the lane and sprint his way into second, just behind Ustiugov. Larkov’s movement took out France’s Renaud Jay, who slid out of his track into Sweden’s Calle Halfvarsson. The men tangled onto the ground. Larkov was issued a yellow card for obstruction. 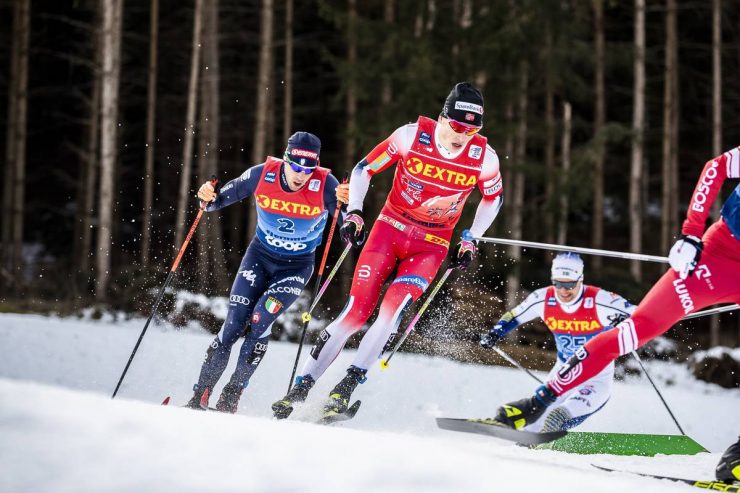 About to make his move, Johannes Høsflot Klæbo flies through the descent in the quarter final. (Photo: NordicFocus) 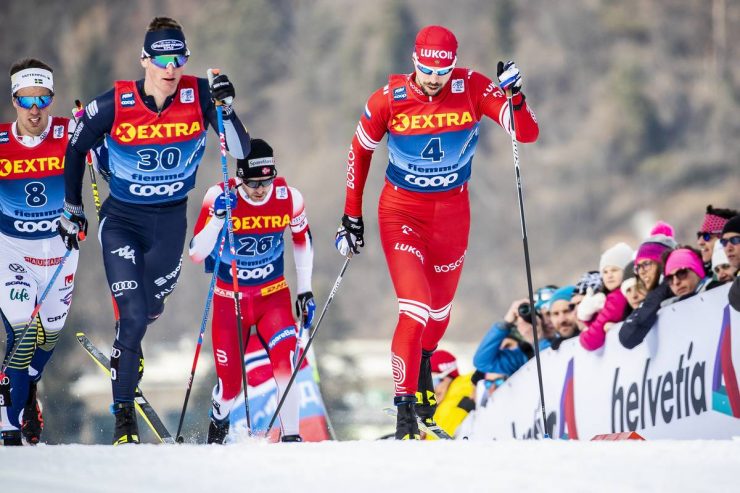 Sergey Ustiugov crests the hill in the lead with Sjur Røthe (NOR) chasing from behind in the quarterfinal. (Photo: NordicFocus)

On to the semis. In the first round, Klæbo again sat tucked into the pack. It was clear that Norwegian techs nailed the wax and ski selection as Klæbo and his teammate Pål Golberg soared to the front in the long descent, gaining momentum for the final sprint to the finish.

Klæbo entered the stadium alongside Bolshunov with Goldberg in his wake. Seeming to gain half a meter on the Russian with each double pole, the two created enough of a margin to lay off the gas before sliding across the line. The force of Bolshunov’s stroke snapped the tip of his pole in the final meters, though he maintained his position in third and was able to advance to the final as a lucky loser.

Ustiugov and Gleb Retivykh advanced comfortably from the second semi-final.

Ustiugov and Bolshunov took the pace out fast in the final heat, hoping to take the sting out of Klæbo’s top gear. Ascending the steep second climb, Ustiugov held the lead with Bolshunov and Klæbo on his heels, all three men running powerfully out of the track. Perhaps to interrupt his momentum, Bolshunov cut in front of Klæbo along the tangent of the curve, but the Norwegian seemed unphased, trusting his skis and his talent in the final stretch. 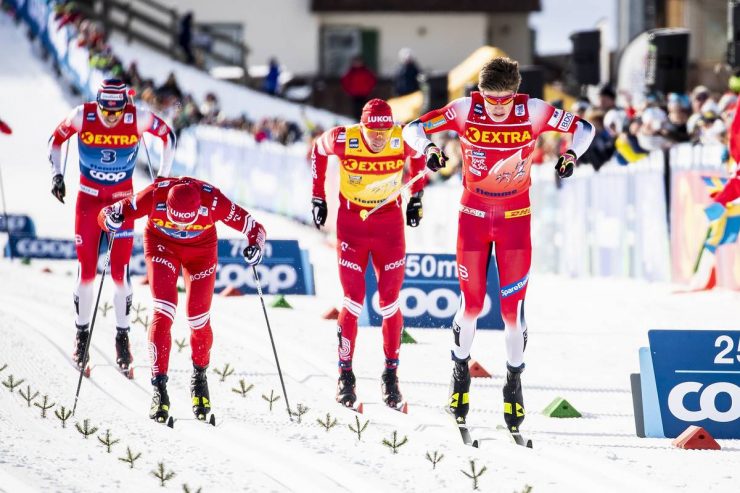 Down to the final meters, Johannes Høsflot Klæbo (NOR) takes the win in Stage 6. (Photo: NordicFocus) 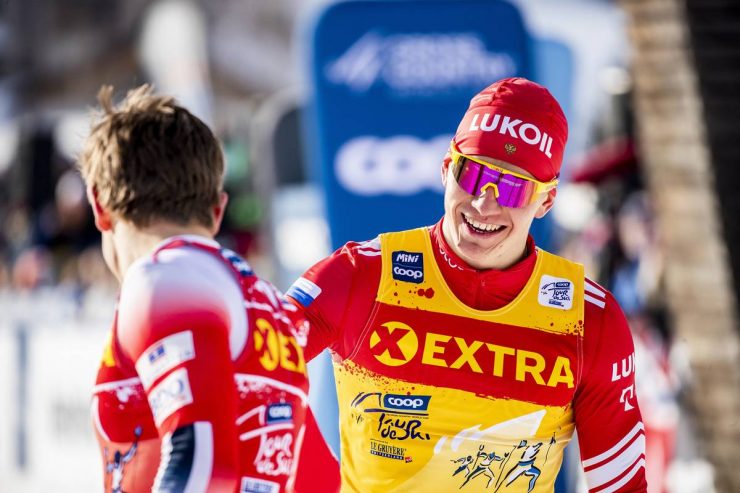 Johannes Høsflot Klæbo (NOR) and Alexander Bolshunov (RUS) exchange congratulations at the finish of the 1.5-kilometer classic sprint. (Photo: NordicFocus) 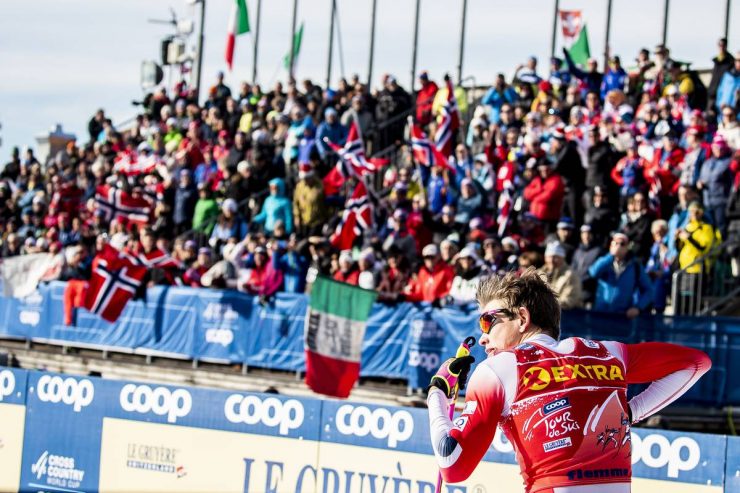 This is Klæbo’s twelfth consecutive sprint victory and the 20th of his career.

When asked about the close quarters in the final climb and Bolshunov’s move to take Klæbo’s path, the Norwegian indicated no belief of foul play.

“I think it was a really hard pace in the last uphill. I think Sergey had a bit of a gap, but at the end, we managed to give it all out and be in good position going into the last downhill.” 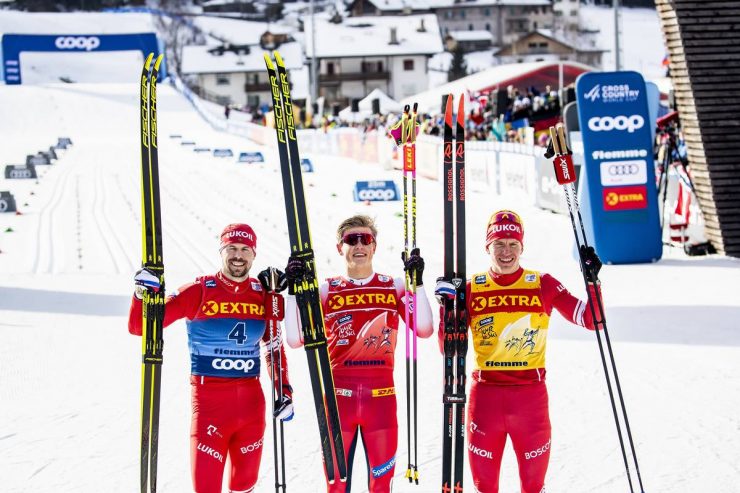 The sole American, Logan Hanneman, qualified in 14th (+11.88). He selected the fifth heat of the quarterfinals, which proved to be an exercise in patience. With no one willing to take the lead, the pace stayed pedestrian until the final descent the pack stayed tight. With a spread of only one second between the men at the finish, Hanneman finished 4th with no shot at a lucky loser spot. He ended his day in 18th.

“I am pretty well beat this late in the tour,” wrote Hanneman in an email. “I know my distance leaves a lot to be desired, especially at this stage, but I really wanted to finish the tour and so I have been doing everything I can not to get pulled out in the distance races and allow myself to race this last sprint. I was quite happy with today, especially for how fatigued I am. But…everyone is in the same boat so that really isn’t an excuse of any type.

“I am really looking forward to getting out of the quarterfinals one day, but I am slowly moving up places in my heats, so hopefully it will happen someday soon!” 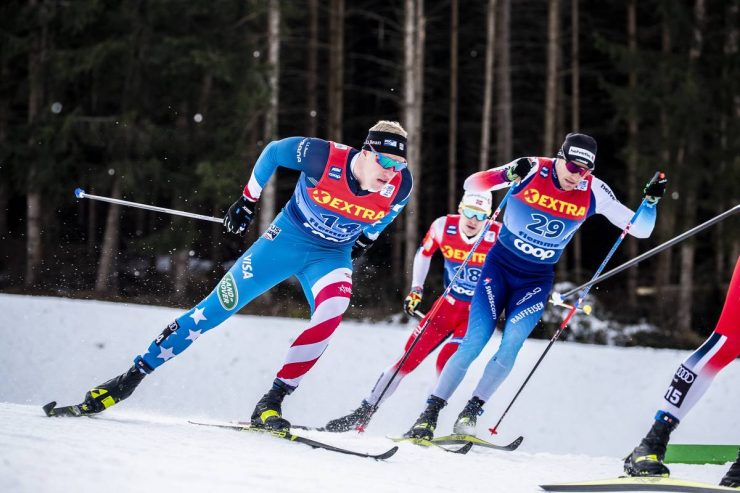 Logan Hanneman in the mix during the quarterfinal. (Photo: NordicFocus)

Traded repeatedly amongst the three leaders, the yellow bib exchanges hands once more before the final stage.

With the top three athletes in the Tour’s overall standings racing in the final, earned time bonuses have less differential. As the final stage will begin in a mass start this year, the men will not have the visual cue of hunting one another up the climb. They can only hope to receive information from coaches about their time ahead of or behind the other leaders. 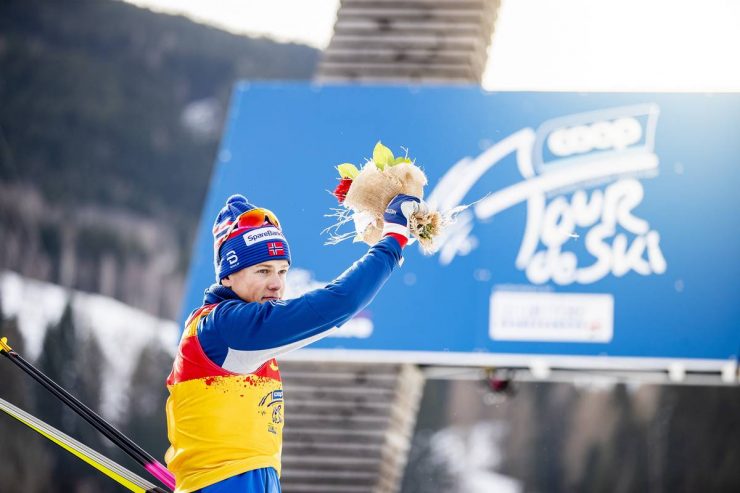 With his victory in the classic sprint, Johannes Høsflot Klæbo regains the yellow leader bib entering the final stage of the 2019/2020 Tour de Ski. (Photo: NordicFocus)

Time for the overall standings was calculated based on the result from qualification, less the bonus seconds obtained in the heats. As such, Klæbo’s qualifier gave him a seven second advantage over the Russians heading into the heats. With 12 bonus seconds more than Bolshunov, Klæbo netted a total of 19 seconds, indicating that his aggregate time is now the fastest of the tour by one second. Klæbo netted 12 seconds on Ustiugov, widening his margin to 15 seconds in the overall.