Perhaps unsurprisingly, the Norwegian men showed up on form for today’s freestyle sprints in Konnerud, just outside the city of Drammen. As the venue was used for the Norwegian National championship at the end of January, most of the team has already had a dress rehearsal racing on the windy course. 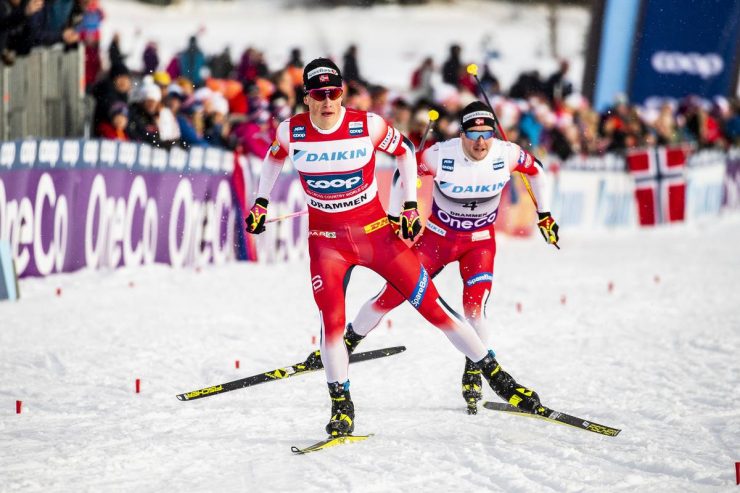 Johannes Høsflot Klæbo of Norway, where he is found most often: winning down the stretch. (Photo: NordicFocus)

It seems that Johannes Høsflot Klæbo, who sat out the national championships, did not need a dress rehearsal. He won the qualifier by a margin of nearly four seconds, continuing easily through the rounds to win the overall. This is Klæbo’s eighth sprint win of the season, matching last year’s record, and his 14th career World Cup freestyle sprint victory, the most of any male athlete.

Racing in the final with Klæbo were four of his teammates: Håvard Solås Taugbøl, Eirik Brandsdal, Sindre Bjørnestad Skar, and Erik Valnes, each of whom also raced in the national championship final on January 31st (and finished in a very similar order). Interrupting the all-Norwegian field was Alexander Bolshunov of Russia.

In the final, Klæbo hovered in the middle of the pack marking his teammates, with Taugbøl in the lead. When Brandsdal took control on the primary climb of the course, Klæbo swung outside of the group to move into second before tucking into the last downhill. As they passed under the arch and headed into the final straightaway, Klæbo engaged his unmatchable top gear, with Taugbøl and Brandsdal chasing. 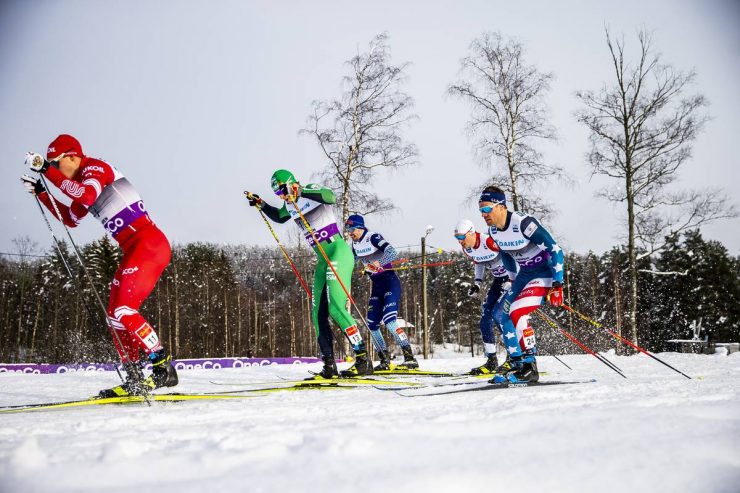 Simi Hamilton (bib 24) during his quarterfinal in Konnerud. (Photo: NordicFocus)

Simi Hamilton was the only American sprinter racing in Konnerud. He qualified in 24th and raced in the fourth heat of the quarterfinals, where he finished fifth, ending his day ranked the same in the overall as in his qualifier.

The looping sprint course around the ol’ church in Drammen, Norway will have to wait another year, or at least until sufficient snow: the iconic city sprint was moved to Konnerud due to insuffient snow in Drammen. Winter, please, pretty please, return to places such as Drammen. 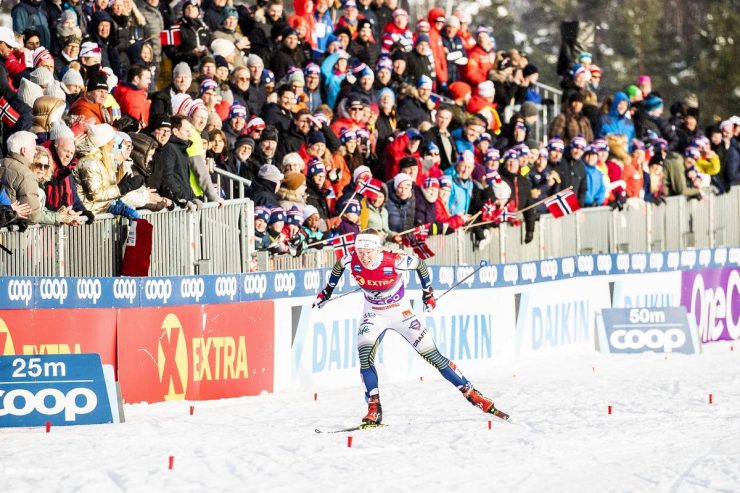 Although deep in Norway, but not so far from Sweden as the planes fly, Sweden took the win and third place in the World Cup’s relocated 1.2 k skate sprint in Konnerud. Jonna Sundling won the final in 2:38.41 — a toe and perhaps the tail of a ski ahead of Switzerland’s Nadine Faehndrich in second (+0.24). It was a photo finish for second through fourth. Linn Svahn, a U23 skier forgoing those championships, placed third (+0.39). Norway’s U23 Kristine Stavaas Skistad was fourth (+0.97), Sweden’s Maja Dahlqvist placed fifth (+5.70), and Anamarija Lampic of Slovenia sixth (+26.04).

Sundling powered down the final sraight outpacing Faehndrich in the final 100 meters. Sundling advanced to the finals as a lucky loser in the semis. 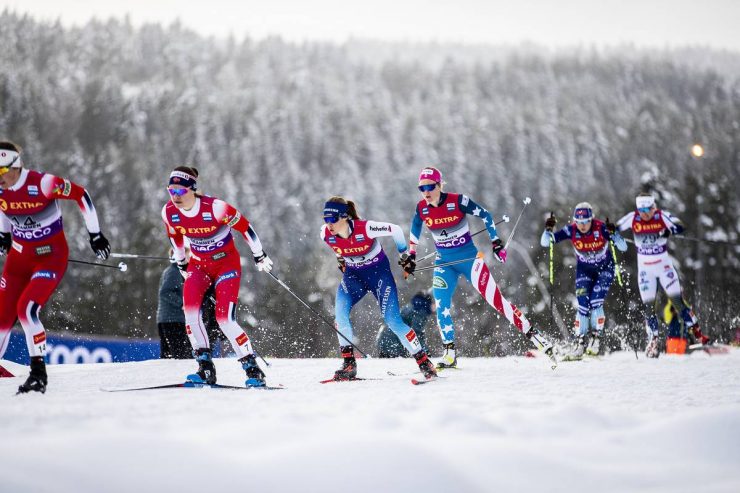 Sadie Bjornsen of the U.S. was the top American in 16th overall. Bjornsen qualified in fourth, 1.2seconds behind the top qualifier, Katja Visnar of Slovenia. Bjornsen placed fourth in the second quarterfinal and did not advance.

Jessie Diggins was the only other American to qualify.After qualifying in 12th , she placed sixth in the first quarterfinal, to end her day ranked 27th. Also for the U.S., Kaitlynn Miller placed 50th, and Becca Rorabaugh 54th. 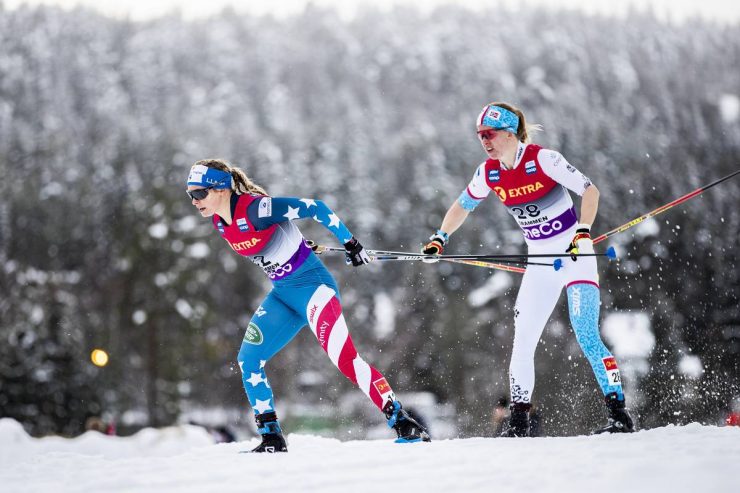 Of note, Swedish sprinter, Hanna Falk, who suffered a back injust prior to the season, started her first World Cup of the year. She finished in 30th.

Racing continues Saturday with the women’s 30 k classic mass start. The men race a 50 k in Oslo on Sunday. 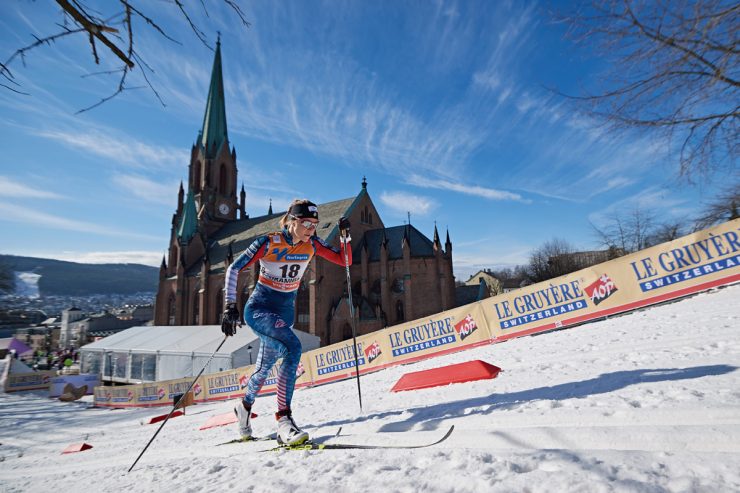 This is Drammen with better snow and lovely skies: Sadie Bjornsen back in 2017. (Photo: Fischer/Nordic Focus)