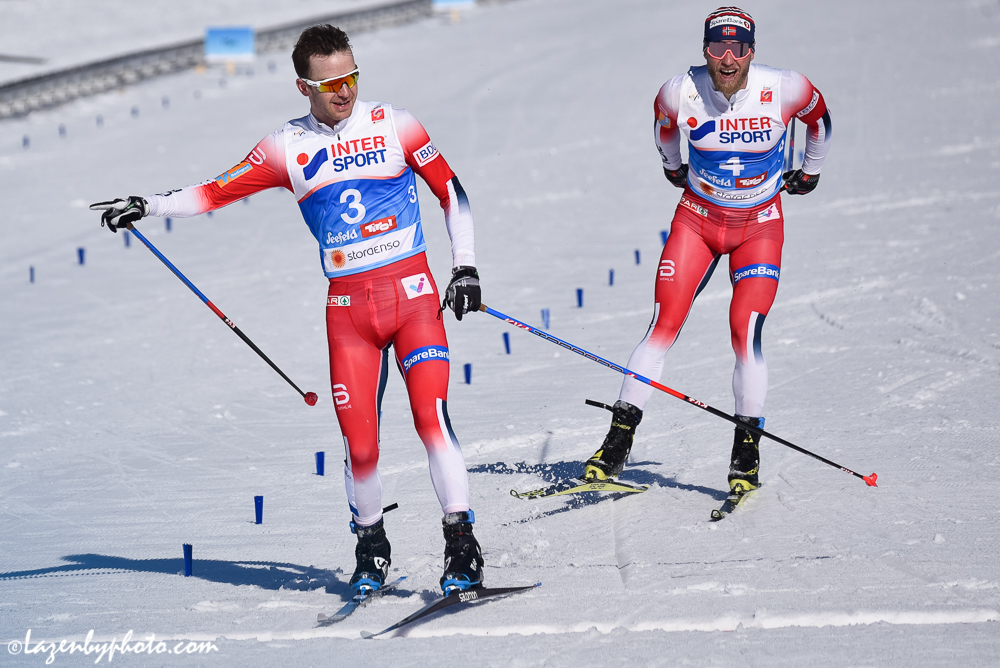 By the time the camera panned past the 26-kilometer mark of the men’s 30 k skiathlon at 2019 World Ski Championships in Seefeld, Austria on Saturday, the original pack of 72 starters had dwindled to five: Norwegians Martin Johnsrud Sundby and Sjur Røthe, Russia’s Alexander Bolshunov, Finland’s Iivo Niskanen, and France’s Clement Parisse.

The leaders had been unphased by Niskanen’s hot pace during the classic portion of the event and with less than 5 k of freestyle skiing to go, Bolshunov levied control of the pace. But it wasn’t long before one red suit was exchanged for another.

With 2 k to go, the challenge came from a well known name in a discipline often tagged with his name: Sundby had moved himself into the lead and looked ready to hunt down his first individual World Championships gold. Since the start of Sundby’s World Cup career in 2005, he has raced in six World Championships–Seefeld being his most recent–yet never has the acclaimed nordic skier achieved a World Championship’s title. 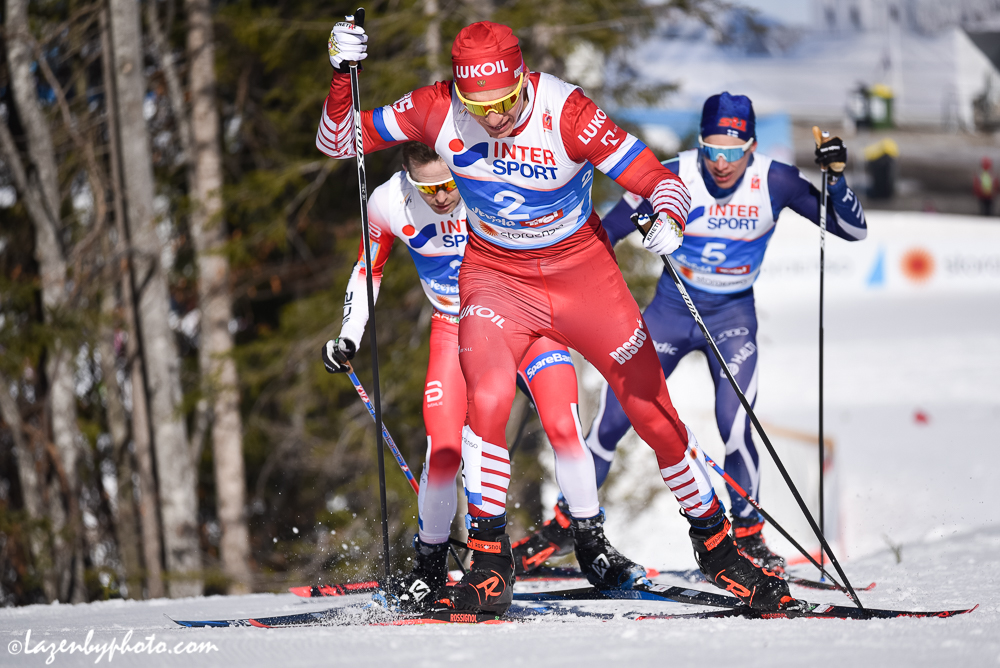 Saturday, he looked bound to break into that realm. In the second to last climb before the uphill to the finish, he began to separate himself from the lead pack of five. By the hill’s crest, only Bolshunov and Røthe had managed to maintain sight of Sundby’s ski tails. Through the gentle descent before the uphill to the finish, the three tuck skated in a line with Sundby setting the pace, Bolshunov just behind and Røthe just behind him.

As the trio ascended the final uphill, Sundby looked steady; perhaps too steady. A brief glance back revealed the raw power of Bolshunov and equally quick tempo of Røthe pressing in from behind. By the finishing stretch, Sundby was swallowed. The sprint to the line became between Røthe and Bolshunov, with Røthe outlunging the Russian by 0.1 seconds for first in a time of 1:10:21.8. Bolshunov, claimed second (+0.1), finishing 0.6 seconds ahead of Sundby in third (+0.7).

“It was an amazing feeling to cross the finish line first,” Røthe said according to a International Ski Federation press release. “When we changed skis, it was important for me to get away from the best athletes in the field. I had some problems with my legs during skating, but it worked out well in the end. I chose the right tactic today … and I hope I was good enough to be part of the relay team on Friday.”

Røthe’s win on Saturday is predicated on a series of firsts this season: earlier in the year he earned his first World Cup win and Saturday marks his first career individual World Championships gold–he has a relay gold from 2013 when he raced the third leg for Norway at World Champs in Val di Fiemme.

For Bolshunov, Saturday’s skiathlon silver medal is his first World Champs podium and, with the men’s 15 k classic yet to race, it may just be the start to his championships trophy case. The 22 year old Russian has made his way to the top of the podium a few times this season and, if Sundby hopes to take home his long sought after individual gold, it will not be without a challenge from the likes of Bolshunov. 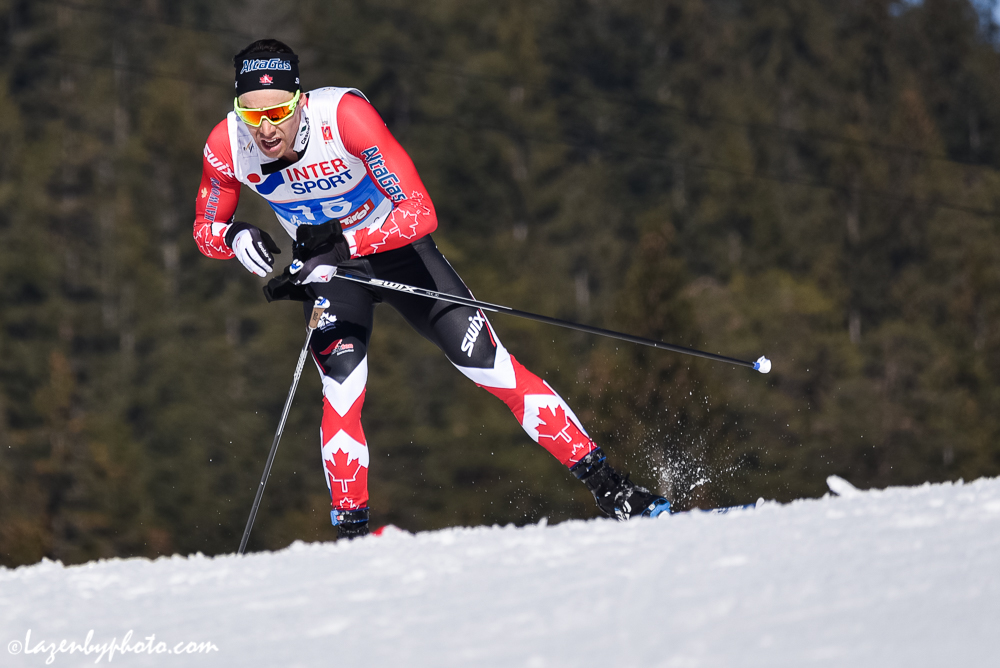 Canada’s Alex Harvey during the men’s 30 k skiathlon at the 2019 World Championship in Seefel, Austria.

Finishing 58.9 seconds back from the winner was Canada’s Alex Harvey in sixth place. The winner of the 2017 Lahti World Championships 50 k and Canada’s favorite medal contender in Seefeld, Harvey recently announced that he will be retiring this season after World Cup finals in Quebec City, Quebec. Many are hoping for a repeat gold place finish for the 30 year old–over his career, he has accumulated five World Champs medals, two of those being gold one from the Lahti 50 k and one from the 2011 Oslo Team Sprint.

On Saturday, however, Harvey told Cross Country Canada (CCC) that he “was never really in the hunt” for the podium, despite his high ranking result.

“Normally when you are in the top-six you are in a mass start fighting for the podium until the end, but that wasn’t the case today,” Harvey said according to a CCC press release.

“I missed the boat in the classic and the gap was made there. The equipment was great, but I just wasn’t skiing well and couldn’t create enough speed – especially on the flat part of the course,” he added.

Happy with the skating portion of the race, Harvey implicated that more could have been had from his classic.

“As soon as I clicked into the skate skis, I was feeling really good,” Harvey said. “I was skiing with a lot of big names, guys started popping a bit from the back and I was feeling really confident leading that group. The skiathlon is my favourite race. I will draw a lot of confidence from the skate today, but I am disappointed with the classic.”

Finishing 1.4 seconds behind Harvey in seventh place (+1:11:22.1) was Great Britain’s Andrew Musgrave. The seventh place finish is Musgrave’s second best result at a World Championships event, his best having come in Lahti 50 k when he finished just off the podium in fourth.

“I felt great on the classic today- having ridiculously good skis helped!” Musgrave wrote in an email to FasterSkier after the race. “The last lap of the classic was pretty hard though – when the worlds 2 best classic skiers started pushing the pace (Bolshunov & Niskanen). I must admit I was a bit glad when Niskanen fell on the 2nd lap- so we didn’t have an entire 15km of him stringing out the field & making us suffer!”

The 29 year old Brit has had four Top 10 finishes this World Cup season and has stood atop a World Cup podium once, that having been a third place finish two years ago in the Toblach 15 k. In Saturday’s race he indicated that while the classic portion of the skiathlon for him went well, the skating segment had him searching for a second gear.

“The first lap of the skate was OK… But I started to pay for the hard effort on the classic by the 2nd,” he wrote. “By 7km into the skate I was pretty wrecked. The last 2 laps were horrific- I was almost crawling by the end! I think I lost an impressive 50s to Harvey over the last 7.5km!”
Either way, many rooting for Britain’s blue red and white,  are hopeful that the seventh is just the start of Musgrave’s World Champs performances. 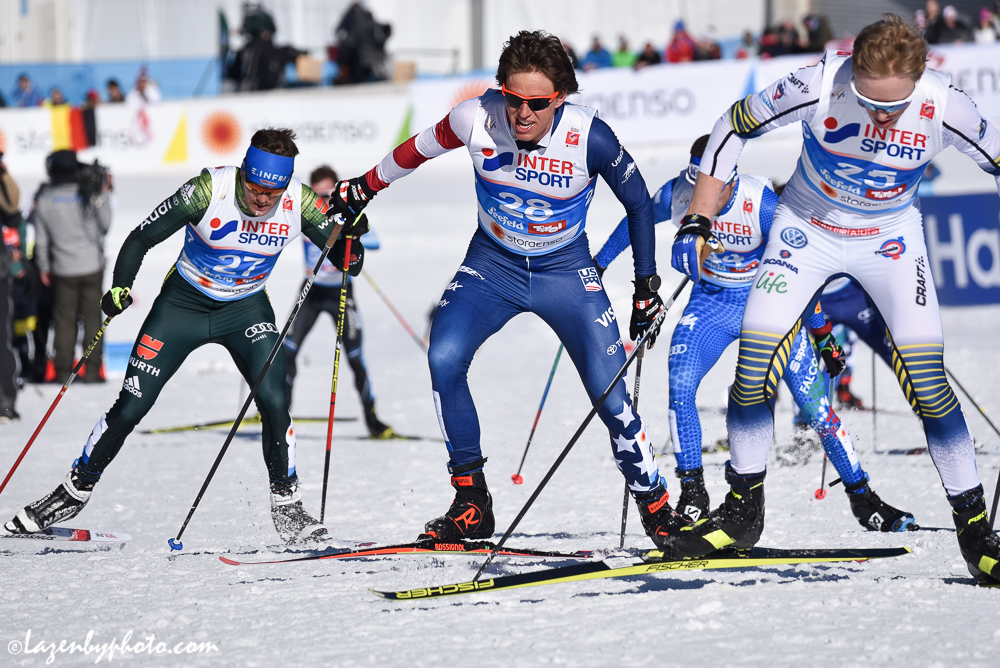 The next top North American finisher following Harvey was American Scott Patterson in 32nd (+4:40.6). In an email to FasterSkier, Patterson explained that the hot pace during the first classic portion of the skiathlon took a toll on him

“In racing today, I struggled from pretty early on.” Patterson wrote. “Iivo Niskanen and others pushed the classic pace pretty hard early. I went with it for a while hoping to stick onto the pack, but it became a little too much for me as I was struggling to kick my skis. I was partially saved by having really fast skis, but it wasn’t enough.”

The switch to his freestyle boards was a welcomed exchange, though low energy reserves left him wanting more.

“In switching to skate, I felt slightly better, but had also dug my legs into a hole during the classic leg.” Patterson wrote. “I tried to work with a group around me, but we weren’t moving up all that well and I wasn’t quite feeling the initiative to go for it on my own.”

“Overall, I think my fitness is pretty good and I am looking forward to getting a little more dialed in and faster over the next few races,” he added. 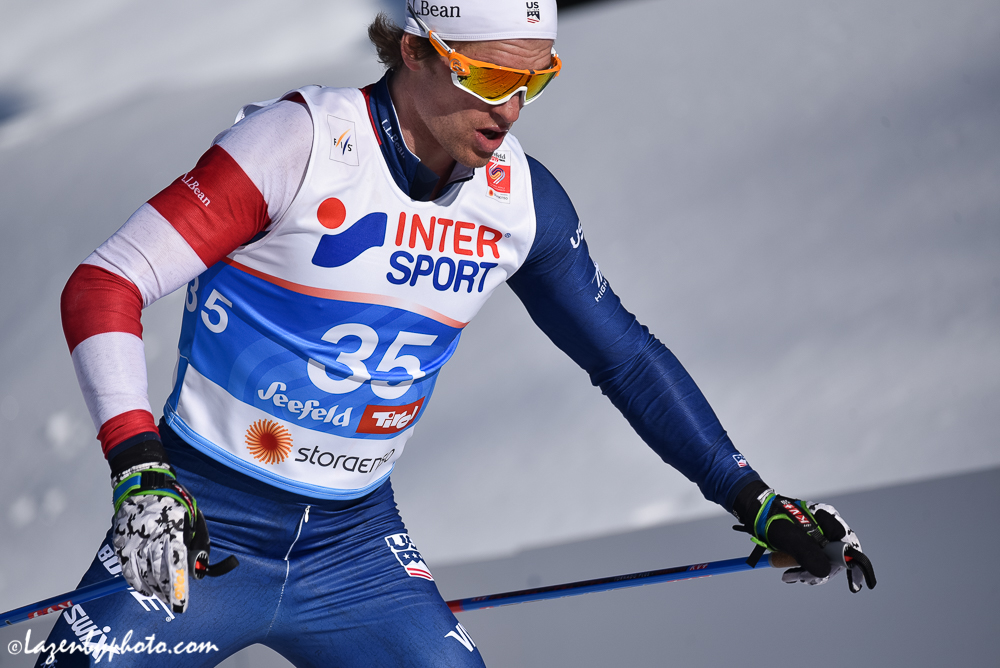 “Today had an awesome atmosphere with amazing fans and hot sun.” Norris wrote in an email. “I struggled in the classic portion and that is a little frustrating. My skate leg felt really good and I was catching guys the whole way. For my first Championship event this was a pretty awesome experience and a good start.” 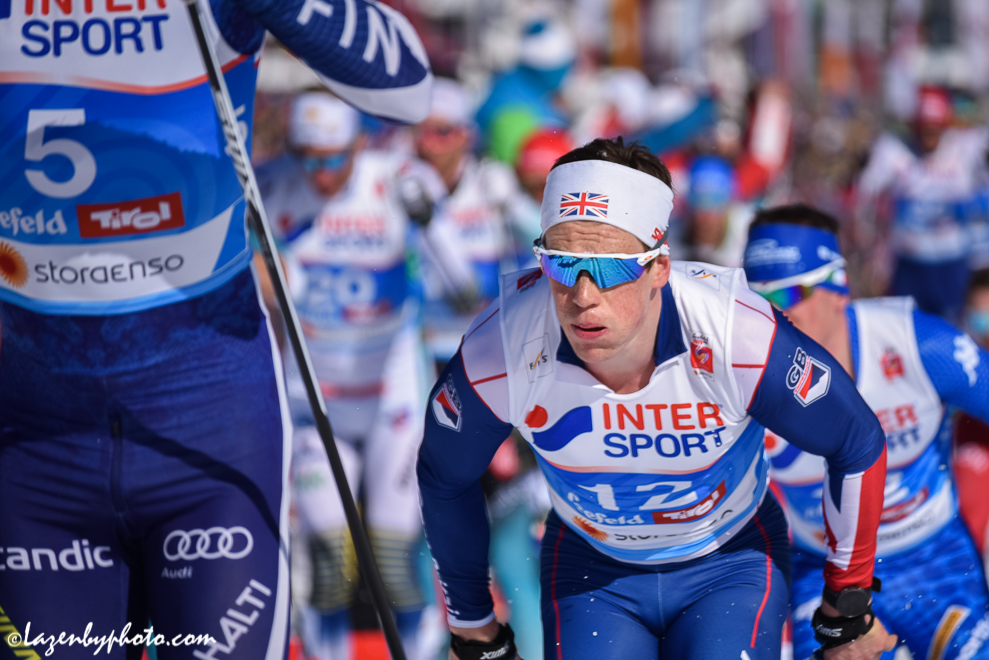 World Championships picks up Sunday with a men’s and women’s Team Sprint.