Valdez from a distance in winter. (Photo: public-domain-image.com)

The country’s second-richest cross-country ski race will take place in the remote community of Valdez, Alaska, this weekend, and there might still be time for you to get there. That’s the optimistic report from Qaniq Challenge Race Director Darryl Verfaillie, director of parks and recreation and cultural services for the city of Valdez, as race day approaches.

The Qaniq Challenge, named after the Alutiiq word for “falling snow,” is set for this Saturday and Sunday, Jan. 16-17 in Valdez. The two-day, 35-kilometer race weekend requires participants to do a 17.5 k classic race on Saturday and a 17.5 k skate race on Sunday. Each technique is held on a different course. A random drawing the night before the race will determine the order in which skiers complete the courses. The lowest combined time for both races wins.

Prince William Sound in early winter (January 2009): Valdez is just to the right of the frame.
(Photo: Flickr/Frank Kovalchek)

2016 marks the second year of the Qaniq Challenge.  The inaugural year saw some challenges stemming from snow conditions, but racing occurred on both days (albeit on the same course twice).

Verfaillie was more than pleased with the first year of the event.

“It went uncharacteristically well for a first race. I think it went flawlessly,” he said in a recent phone interview.

Verfaillie cited the positive reviews that he got from participants, and proudly noted – perhaps accurately, in light of southcentral Alaska’s snow-challenged winter in 2014/2015 – “For those two days, we had the best ski trails anywhere in Alaska.”

Kling, a recently retired competitive skier who has raced across the U.S. and world, including at the 2015 China Tour de Ski, echoed Verfaillie’s analysis of the success of the inaugural event.

“The entire community of Valdez (Valdez Nordic Ski Club, Parks and Recreation, Valdez Snowmachine Club, Search and Rescue and many community volunteers) came together last year to pull off a great event with difficult conditions,” Kling wrote in an email. ” You would have never known it was their first year hosting the race.”

“Going to the Qaniq last year was definitely a unique experience. On one hand there was not a very high turnout – likely because of the low snowfall – but the prize money made it a very serious competition,” Treinen wrote. “Scott Patterson, who finished second, and I, made a little gentlemen’s agreement not to blow out too much money on pure fluoro waxes, but other than that there were no holds barred.  We both opted to double pole on the classic day, which I think was the right decision for us both, and then in the skate day it was a huge tactical battle because the trail was so fast and narrow.  Luckily, nothing too dirty happened and it was a really fair race.

“Aside from the competition, what stood out to me was how motivated the organizers were,” he added. “It is very rare to have race organizers who can conceive something becoming so much bigger than what it is now, and these guys definitely have that vision.  They knew what they were doing from experience and looking into how big races are held, but didn’t hesitate to ask racers for input.  I can definitely see it becoming something big in the next few years.”

“It is very rare to have race organizers who can conceive something becoming so much bigger than what it is now, and these guys definitely have that vision.” — Lex Treinen, defending Qaniq Challenge champion

Compared to last year’s atypically snow-sparse race, things on the ground in Valdez are looking better this year. Verfaillie cited preventative measures taken from last year’s race, including grooming all winter with an eye to repairing future meltdowns and building dams and water bars to divert water from the trails during rain events.

Verfaillie reports that, as of a week ago, the trails were  “all snow,” and the plan was to run the full, 17.5 k distance over both courses. Verfaillie is particularly pleased to let skiers race over the in-town course, unavailable last year, which takes skiers from the Chugach Mountains right up to the edge of Prince William Sound.

The long-range forecast for Valdez currently shows wintry temperatures, with highs on Saturday and Sunday in the mid-20s, and the possibility of snow on Sunday.

There are some unique factors about the Qaniq Challenge – for example, the order in which each skier skis each course is chosen by random drawing, so hypothetically, some top skiers could be skating on hardpack on Saturday while others have to wade through 18 inches of moist snow on Sunday – but Verfaillie’s race preparations and concerns ultimately sound a lot like those of any other race director getting ready for a ski race.  It’s the prize money that really sets this race apart.

Lex Treinen shows his appreciation to race director Darryl Verfaillie after receiving his first-prize award of $3,000 in the 2015 Qaniq Challenge in Valdez, Alaska. Women’s winner Becca Rorabaugh (l) looks on. 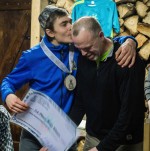 Lex Treinen shows his appreciation to race director Darryl Verfaillie after receiving his first-prize award of $3,000 in the 2015 Qaniq Challenge in Valdez, Alaska.

The total prize purse for the Qaniq Challenge is $10,000 dollars.  For each gender, first place (based on combined times for both days) gets $3,000, second place gets $1,500, and third place gets $500.  First place at Valdez is rewarded with as much as third place at the American Birkebeiner (the only ski race in the country with a richer purse).  Second place in Valdez nets more than the $1,200 awarded for winning a national championship – Patterson won more in Valdez last year for finishing second than he did in Houghton last week for winning the 15 k classic.  Any way you slice it, it’s a lot of money for a ski race.

That’s by design, says Verfaillie.  And he’s well aware that those numbers will raise eyebrows within the ski community.  He chose the cash amounts he did based in part on the input of Fritz and longtime APU skier and Olympian Holly Brooks, who were in Valdez a few summers ago for a community outreach event.  He asked them then how much money they were competing for elsewhere, and how much it would take to get skiers to come to Valdez.  When he mentioned a $10,000 purse, Verfaillie says, “that really got Lauren’s attention.”

Money talks.  When asked by email whether he was planning on defending his title in this year’s race, Treinen responded, “I am definitely falling for the sin of avarice and going back this year.”

Verfaillie has lofty ambitions for the event.  When asked about having the country’s second-largest prize purse for a cross-country ski race, Verfaillie responded, “I would love to have the largest.”  If that were to happen, “that’d be years from now,” he continued.  “But if I were to give away 50 or 60 thousand dollars total, I would love that.”

Verfaillie acknowledges that it’s not easy to get to Valdez in winter, so “we want to make it worth people’s while.”  As for the ample amounts of prize money, Verfaillie says, “I know I don’t have to [give out that much] – but if we can, why not.”

The race itself is funded by the city of Valdez, which guaranteed funding, including prize money, at current levels for three years beginning in 2015.  Verfaillie noted that the Qaniq Challenge is one of the few items in the city budget that rolls over from year to year.

“The [Valdez City] Council was kind enough to say, We believe in the potential for this race,” Verfaillie explained. “All the money [brought in this year] rolls over into next year’s race.”

Verfaillie obviously hopes to see participation numbers increase from 2015 through 2017; if numbers don’t go up, he acknowledges that the structure of prize money may need to be changed, and the race’s bottom line will suffer.  But he remains committed to his race, and to the goal of showing that Valdez can be a viable winter destination for cross-country skiers.  “This ski race belongs to the skiers,” he notes.  “If folks want to have a ski race, they need to come do this.”

Verfaillie estimates that it costs the City of Valdez $25,000 to put on the race, including prize money but excluding the use of city time and resources.  He acknowledges that Valdez, which gets much of its revenue from taxes on the Trans-Alaska Pipeline, whose southern terminus is in Valdez, is in an enviable fiscal position.  For example, he notes that Valdez, with a population of around 4,100 people, has an annual city budget of $65 million (this comes out to close to $16,000 per person.  Anchorage, by contrast, with a population of approximately 300,000, has an annual budget of $481 million – around $1,600 per person.)  The city also has its own sovereign wealth fund, a muncipal-level version of the statewide Alaska Permanent Fund.

For the time being, though, the Qaniq Challenge may still be working through the growing pains of an event in its infancy.  There were 31 finishers in the race’s first year. As of Thursday, 29 skiers had registered for this year’s event, including likely podium contenders Brooks, Fritz, and Rorabaugh.  (Also, full disclosure, this reporter.)

“I anticipate several more from Anchorage will register this week,” Verfaillie wrote in an email two days before the race weekend.

The buoyant Verfaillie, described in a 2015 Alaska Dispatch News article as “an energetic retired U.S. Coast Guard captain,” sounds completely unconcerned about the turnout.  “We are guaranteed to run the race,” he promises.

In response to the low numbers, he notes that “the odds couldn’t be any better for those folks” who are entered.  Verfaillie also observes that over half of last year’s racers registered in the week before the event, and that he has “far more commitments than I do registrations” right now.

Valdez is slightly over 300 miles from Anchorage, a drive of approximately six to eight hours depending on winter road conditions. The state ferry system also runs between Whittier and Valdez. Race spots and hotel rooms remain available; late registration is currently $125. Budget around $300 more to take the short flight from Anchorage to Valdez, or find a car or carpool for the all-day drive.

Stay tuned for this author’s firsthand report of the racing experience at the second-annual Qaniq Challenge.

The entire field of the 2015 Qaniq Challenge at the awards banquet in Valdez, Alaska. (Photo: Seth Adams)