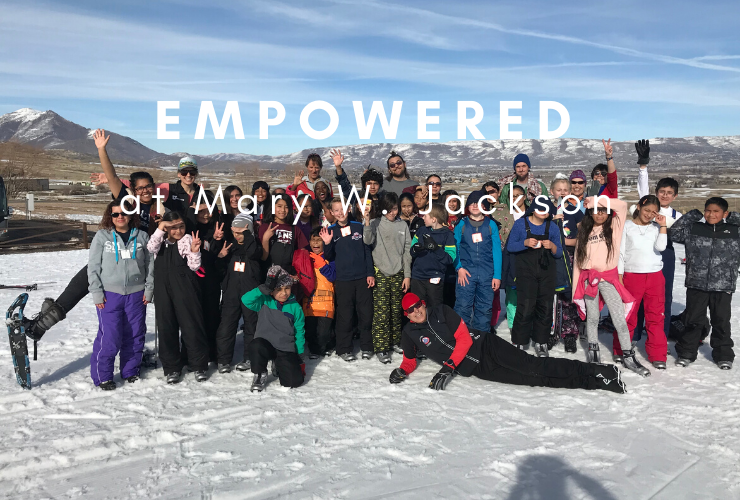 This is a two-part series exploring how some students in the Salt Lake City area are exposed to cross-country skiing through the good work of community members. Part-one features Gilberto Magana of Hartland Community 4 Youth and Families, a non-profit serving disadvantaged youth. Part-two explores how the Utah Nordic Alliance, local teacher Rose Kjesbo, and dedicated colleagues teamed up to get kids on snow.

Roughly thirty-five pairs of ski boots, poles, and skis to organize and hand out to the fourth through sixth graders that cross-country ski at Mary W. Jackson Elementary in Salt Lake City seems herculean. The little pieces that must come togther are daunting. And there’s the teeter-totter task of staying upright on skinny skis for those new to the sport.

Thirty-year-old Rose Kjesbo (formerly Rose Kemp) teaches second grade at Mary W. Jackson. The former University of Utah skier has been the spark behind the school’s ski program. She came to teaching after taking education classes at the U. The profession requires the kinetic energy she knows how to harness from her cross-country racing days and her penchant for coordinating many moving parts. And there’s her drive to be part of something bigger than herself.

“Our students represent the diversity of America,” is how the student-body is described on the school’s website. Mary W. Jackson Elementary, renamed after the first black female egnieer at NASA, is a Dual Immersion school, meaning those students who speak either Spanish or English fluently have the opportunity to learn in both languages throughout the school day. Kjesbo noted the student body is approximately sixty percent Hispanic, with a high population of children of Samoan and Philipino descent. Nearly eighty percent of the school lives at or below the poverty level. (The Census Bureau estimates that 17.9 percent of Salt Lake’s population lives in poverty.) 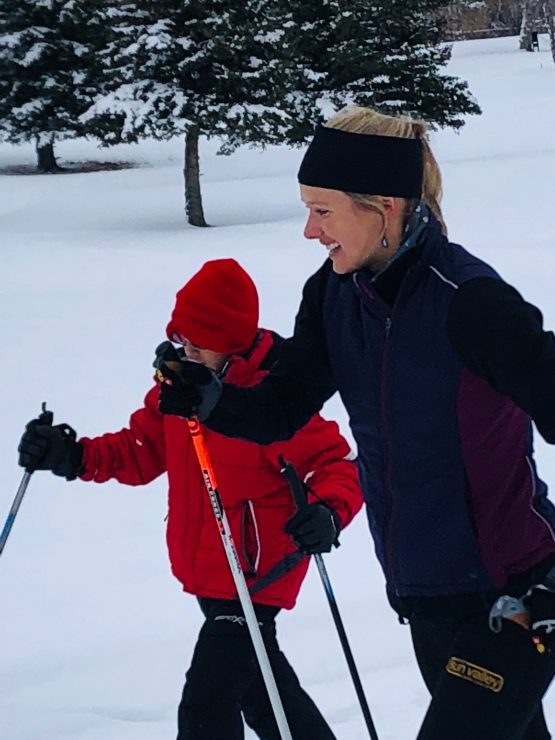 Rose Kjesbo skis along with a student. (Courtesy photo)

“The challenge, especially at the beginning of the year, is that you are setting up your students to come to school excited and ready to learn,” Kjesbo said. “That is such an important thing for them and for us to realize; that I have those expectations. But I am fully there, present and loving, and setting the expectations of a welcoming classroom. I also have academic expectations while being mindful that each student is an individual. You have to think about where they are coming from and understand what management strategy is going to work the best for them.”

Kjesbo is able to rely on a team of dedicated colleagues that include a community liaison, teachers, lunchroom and office staff who are bound by the mission of cultivating a productive and safe learning environment. As part of that environment, Mary W. Jackson Elementary teamed up with the Utah Nordic Alliance (TUNA) to expose students to cross-country skiing.

Kjesbo said taking kids out for after school ski excursions when the organizational machinery is present makes the logistics more tenable. The hall monitoring as students are rleased on ski days becomes dialed. The change from school-to-ski clothes eventually synchs. Gear is handed out. The bus loaded. Upon arrival at the Mountain Dell ski area students are divided into small pre-arranged groups to begin their work with a TUNA coach. This is not to say orderliness manifested from day one. Kjesbo said by the third ski day, the routine had been refined as the scores of players involved knew their respective roles and expectations.

On the receiving end of those students at Mountain Dell is most often TUNA’s Tim Metos. The now-retired bike and ski shop owner complements Kjesbo’s knowledge of the students with his understanding of how to bring a diverse group of kids into the cross-country skiing fold. Metos explained that TUNA’s Junior Outreach Program provides ski gear, bus transportation, and coaching. The financial backing for the after school program derives from the generosity of a private foundation. The program is “turn-key out of the school”, Metos explained. Skis, boots, and poles are housed at each respective school, his job is to ensure the on-snow experience is meaningful.

Metos employs several paid coaches to work with the after-school program. A core group of volunteers also allows TUNA to keep the skier to coach ratio low. Like any club program working with new skiers, the goal is to familiarize kids with the gear, the environment, and the concept of sliding efficiently on snow all while smiling. 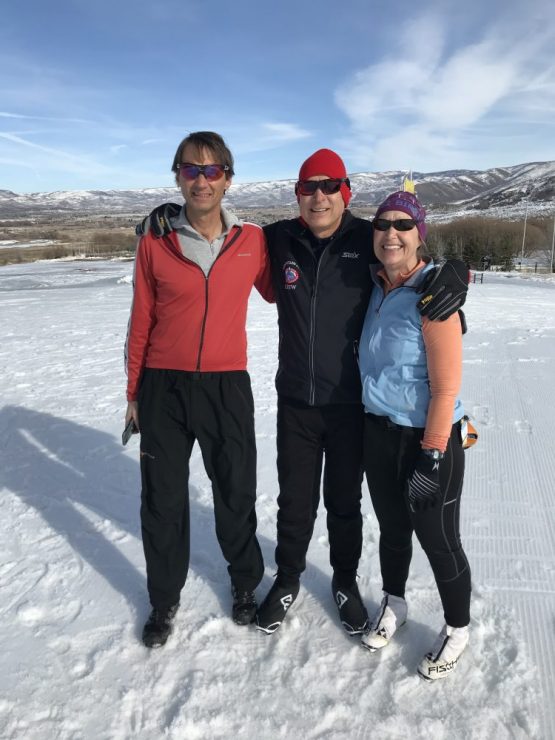 The TUNA Junior Outreach Program has run for 20 years and much of its early success belongs to now retired Salt Lake School District employee Brian O’Neal. The program, designed to get the community’s disadvantaged kids skiing, has evolved into a core outdoor activity supplement for several city schools. The program, due to gear constraints, caps the program at 140-150 students annually. Each participant skis five to six times per season at Mountain Dell, which sits up-canyon on Interstate-80, approximately 17 miles from downtown.

“I started this out with the ambitions of developing elite skiers, to get kids involved in this sport,” Metos said. “It is pretty accessible really. For many of these families, mom and dad have jobs and they are working really hard. But they may not have a ton of time to get out with their kids, but perhaps they could grab some rentals and do a family outing, it is not like trying to go alpine skiing. So I had this notion that they would somehow adopt the sport as part of their life here. Eventually, I came to the realization that as much as anything, we are showing them a half a dozen afternoons in the winter when they can go out and have some fun and build some self-esteem. And at least they know that it is feasible to do this. But it is more challenging than I thought —  it took half-a-dozen years to figure that out.” 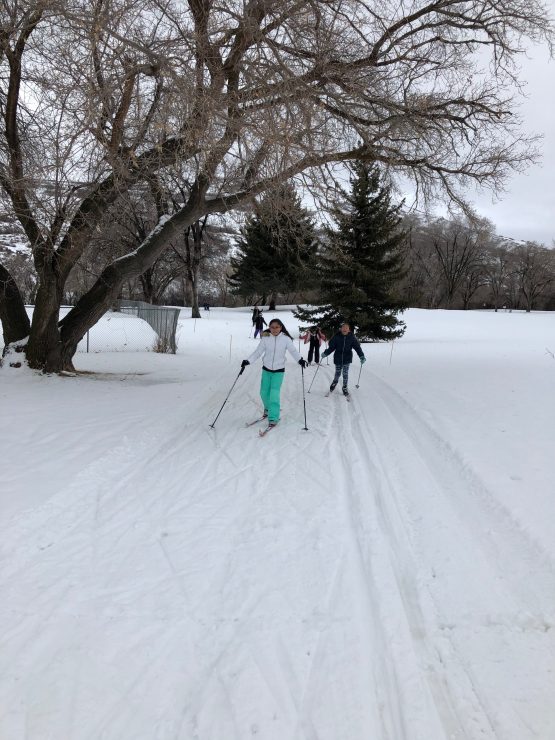 A key concept both Metos and Kjesbo emphasized was that kids feel safe and supported when trying something new. Taking a risk, even a relatively small one, can feel insurmountable when your day is filled with several unknowns. Metos, through his years of work in the ski program and Kjesbo, through her work at Mary W. Jackson, understand the underlying premise for sucess: That kids need to be welcomed for who and what they are. Without that safety net, one can imagine the sense of dread a student new to skiing might experience if faluire were not an option. More importantnly, students might never try something out of their comfort zone back in the classroom. With the safety net, Metos and Kjesbo can foster a sense of fearlessness in students who might struggle with a new endeavor like skiing.

Constructing that safety net begins far from Mountain Dell where the team at Mary W. Jackson invests in community. Kjesbo explained the program succeeds because people have developed meaningful relationships.

“There is that community piece within the school’s neighborhood that I talked about, the relationships that we develop among Tim’s coaches that he brings from TUNA, and those with our kids and with the families, our office staff, school staff,” Kjesbo said. “Those relationships are intergenerational, from myself to the older volunteers who have worked with Tim for a long time or have been in the ski community in Salt Lake for a long time, to our young kids. Those relationships have created this really amazing safe space around nordic skiing.”

Kjesbo said she has received much through skiing including her dogged work ethic. The sport remains a big part of her life just as it did when she progressed through the ranks to eventually ski on the SuperTour. Her infectious dirve has been a vehicle to share something personal with the Mary W. Jackson community outside the normal scope of the school day.

“I am passionate about it and I want to share that with my kids,” said Kjesbo. “They see that too as we all open up a new space to something that we really love.”