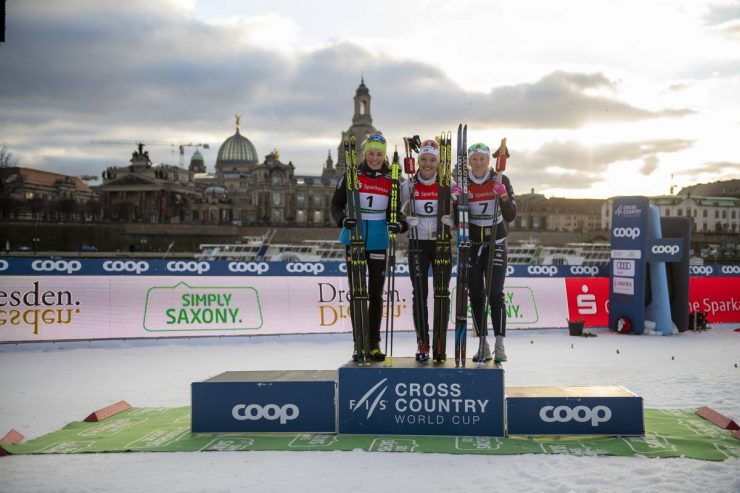 Victory on the streets of Dresden. Linn Svahn (SWE) takes the win ahead of Anamarija Lampic (SLO) and Maja Dahlqvist (SWE). (Photo: NordicFocus) 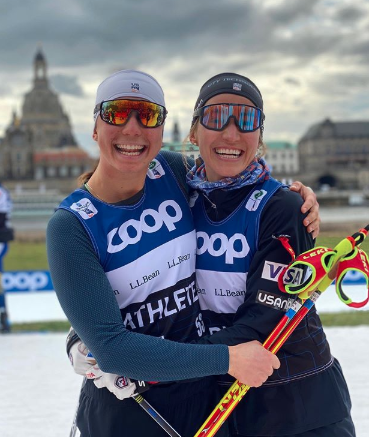 With the Tour de Ski in the rearview mirror, athletes donned bibs for a city sprint weekend in Dresden, Germany. Like the other bookend in Planica the weekend before it began, athletes who focused on the Tour de Ski — mostly distance skiers and all-arounders — were not in attendance to focus on rest and recovery. This narrowed the field  in Dresden to a sprint-focused lineup.

Under grey skies, skiers drag-raced on an icy ribbon of snow around two lap course along the Elbe River, navigating hairpin turns at each end and a few roller hills along the way. Past the Frauenkirche cathedral and Semper Opera building they soared, while fans cheered from green grassy slopes and stone steps.

Despite making her way up the Alpe Cermis six days prior and taking the win in both sprint stages of the Tour de Ski, Anamarija Lampic of Slovenia lined up in Dresden and posted the fastest time in the qualifier, 2:30.38. Lampic finished 19th overall in the Tour standings.

Sophie Caldwell and Julia Kern were the sole American women in the field. Caldwell was the top qualifier for the U.S. in 4th, with Kern in 15th. After taking 9th in the sprint in Lenzerheide and landing inside the top-30 in distance races, Caldwell withdrew from the Tour after the fourth stage in Toblach. Battling a cold, Kern withdrew after the skate sprint second stage, where she finished 14th. 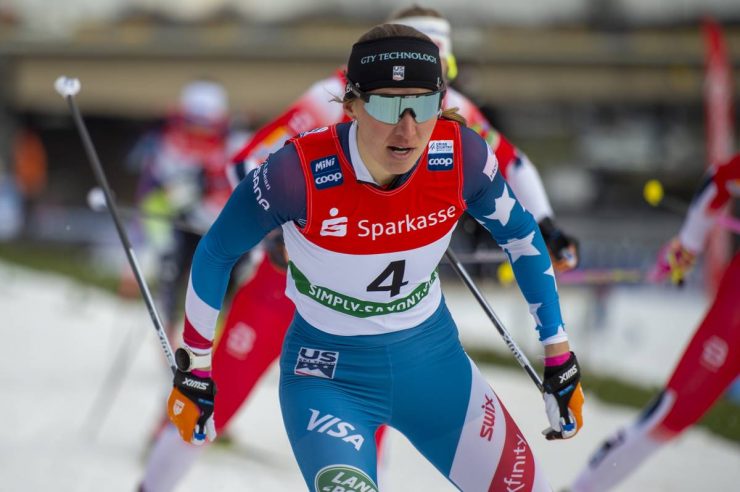 Focus. Sophie Caldwell works her way through the rounds to a fourth place finish in Dresden. (Photo: NordicFocus)

In the first heat of the quarterfinals, Caldwell looked typically calm, cool, and collected. She held a position at the front throughout the race, her technique perfectly smooth and oozing power. Caldwell’s position was secure enough that she could lay off the gas before sliding across the line with Nadine Faehndrich of Switzerland.

Kern was not so lucky. Though she rounded the first hairpin on her own in the lead, skiers became bunched heading into the subsequent high-speed corners. At the apex of the second curve, Kern was pushed wide as Nina Dubotolkina of Russia caught a v-board and fell to her knees in the middle of the group. On the final turn, Kristine Stavås Skistad lost her footing and shot off the edge. Kern finished 4th in her heat, which was slowed by the crashes, and did not advance. 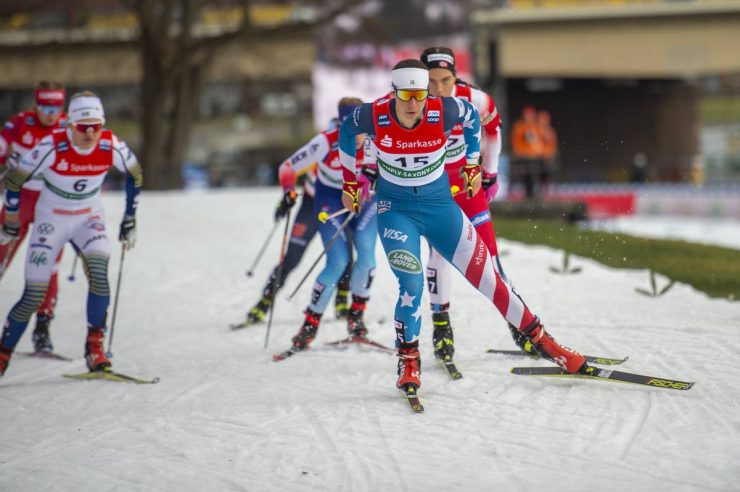 Julia Kern leads the way in the first lap of her quarterfinal in Dresden. (Photo: NordicFocus)

Racing for Canada, Dahria Beatty finished 29th overall and Maya Macisaac-Jones 37th. Beatty was also eliminated in the quarterfinals after finishing 6th in her heat. She has landed in the top-30 in each of the three freestyle sprints she has contested on the World Cup this year; she was 25th in Davos, and 16th in Planica. 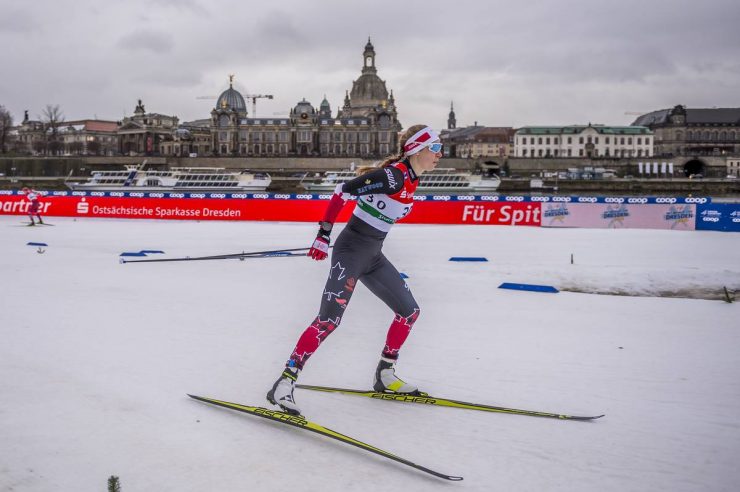 In the semi, Caldwell tucked into the middle of the pack, marking leaders Laurien Van der Graff of Switzerland, Linn Svahn of Sweden, and Lampic. Rounding the final curve safely, they laid on the accelerator, all four women in a tight group down the final straight, a fifth on their tails. Svahn threw her boot for the win, Caldwell crossed just behind in a three-way photo finish with Van der Graff and Lampic. The American was deemed third; as the top time in the next round was three seconds slower than hers, she advanced to the final without a hitch.

On the hunt in the final, Caldwell stayed wide on the turns, out of trouble in the event of a fall. Sweden’s Svahn and Maja Dahlqvist set the pace, but the group stayed tight.

The women charged down the final straight three abreast with Svahn at the front. In another photo finish, Lampic and Dahlqvist threw their boots for second and third, respectively, with Caldwell in the next lane for 4th. Linn Sömskar of Sweden took fifth as Van der Graff rounded out the final in sixth. 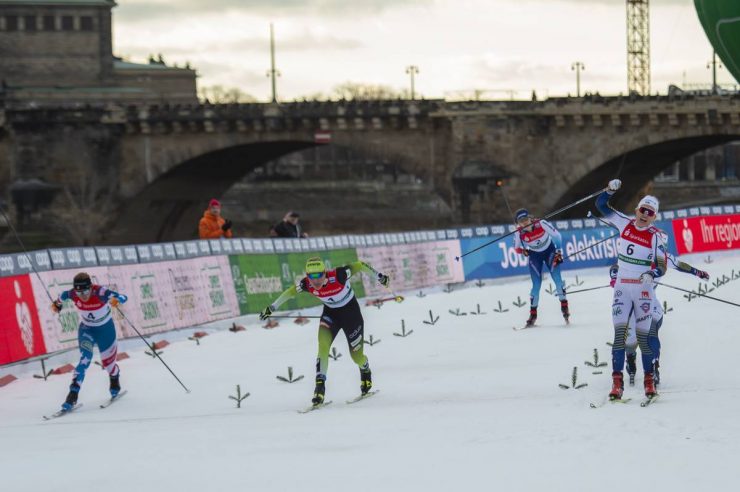 Linn Svahn takes the win in Dresden with second through fourth in a photo finish behind her. (Photo: NordicFocus)

“It is a difficult course, but I like it when it’s high speed and I like to do a strong finish, so I’m happy,” a smiling Svahn told FIS at the finish.

In response to questions about her tactics with her teammate Dahlqvist, Svahn responded that she was proud to share a spot in the top three.

“It’s so fun to have Maja beside me on the podium. She’s strong and had a really great season last season, then a little bit tougher this year, so I’m so happy to be beside her. Our plan was to just be in the lead the first lap, then I felt very strong, so I tried to push from the hill — if you can call it a hill.”

A newcomer to the World cup, this is Svahn’s second win. With an unforgettable blurt of surprise, she seized her first win in Davos in December. 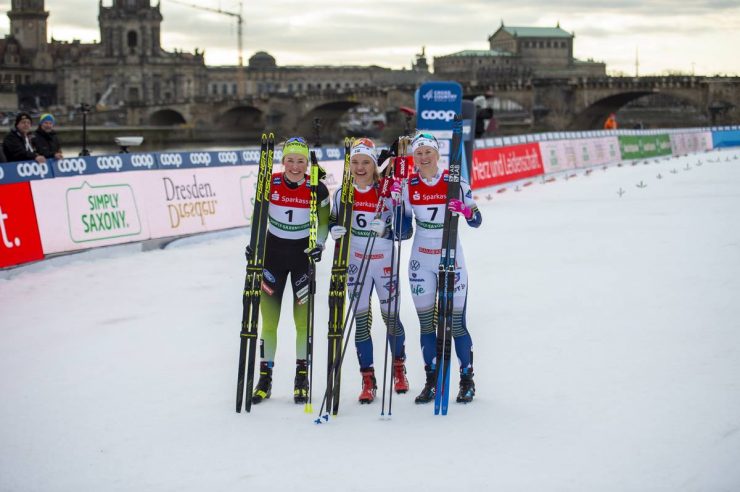 In a post-race call, Caldwell discussed her tactic to stay unscathed through the tricky corners and crashes of the course. She also explains how the deteriorating manmade conditions was familiar to her, her advice for selecting skis in these conditions, and the excitement of competing in a stacked field of women. 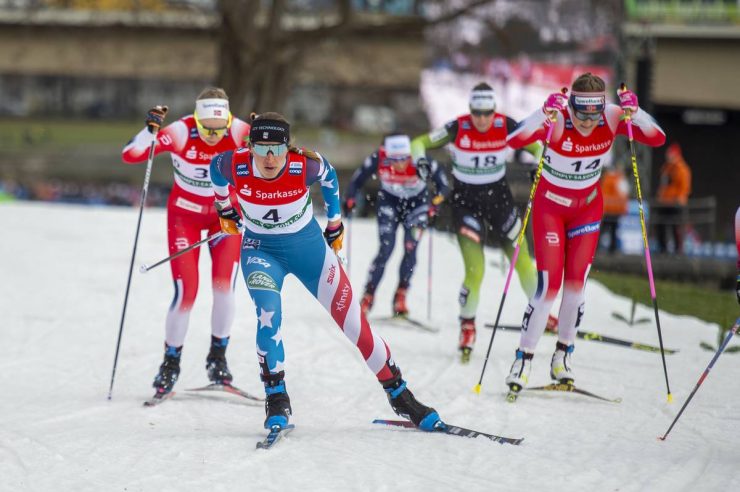 Sophie Caldwell of the U.S. placed fourth in the Dresden skate sprint. She is currently ranked fifth in the sprint overall. (Photo: NordicFocus)