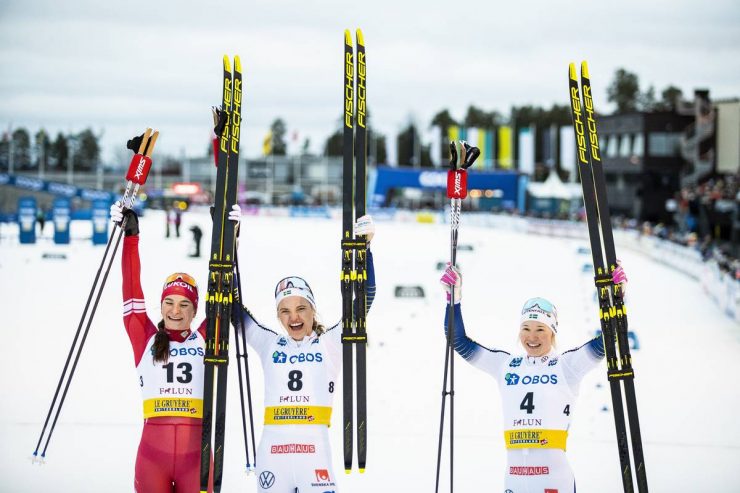 Not the backdrop one might expect from Scandiavia in mid-winter, rather, green grass, bare ski jumps, and a ribbon of snow were found in Falun, Sweden. However, what was lacking in snow was made up for by a densely packed crowd of cheering fans, erupting as athletes flew by in the women’s classic sprint.

An occurrence that might meet our expectations is that the Swedish women showed up on home turf. Johanna Hagström won the qualifier in 3:15.96, followed by Anna Dyvik. Sweden also took 4th, 5th, 8th, 9th, and 10th. Yes, seven of the top ten qualifiers were from Sweden. Only Sophie Caldwell, Ane Appelkvist Stenseth of Norway, and Anamarija Lampic of Slovenia in 3rd, 6th, and 7th, respectively, were the outliers from other nations. 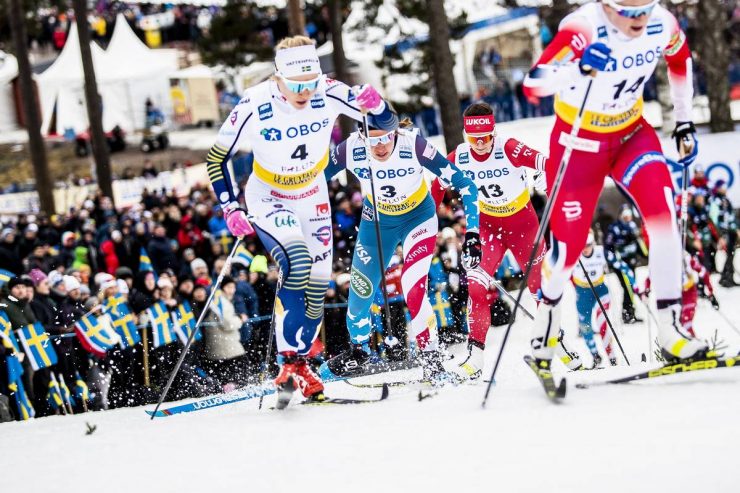 Sophie Caldwell chases Anna Svendsen (NOR) and Jonna Sundling (SWE) during the quarterfinal of the classic sprint in Falun. (Photo: NordicFocus)

Five of the seven continued on to the semifinals, along with four Norwegians who weren’t going to back down easily. To round out the remaining three nations, Sophie Caldwell advanced to the semis as a lucky loser after a photo finish with Sweden’s Jonna Sundling in the first heat, which was won by Russia’s Natalia Nepraeva. Lampic moved on by taking second in the next heat. 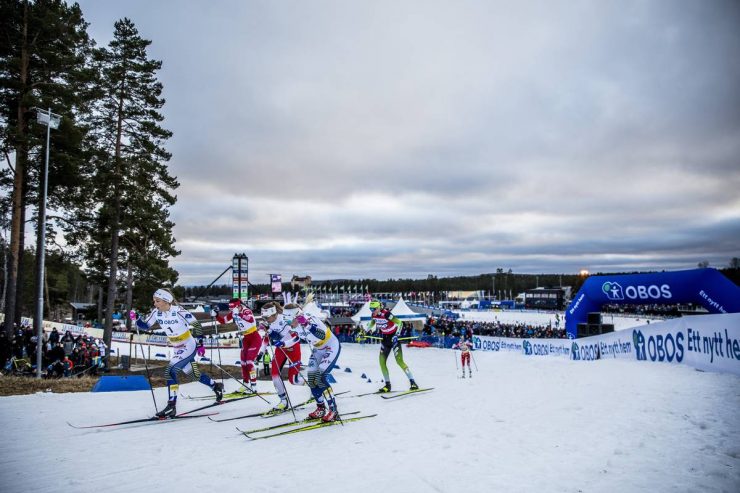 Fast racing in the semi-final of the 2020 classic sprint in Falun, Sweden. (Photo: NordicFocus)

The intensity ramped up in the stacked first heat of the semi: Nepryaeva, Lampic, Hagström, Jonna Sundling (SWE), Maiken Caspersen Falla (NOR), and — perhaps unexpected in a sprint semi — Therese Johaug. Nepryaeva led the charge with Sundling and Hagström. The pack took the troublesome corner fast, but the women kept their composure, with Nepraeva shooting out of the turn with high speed. She held the lead all the way into the stadium as a group of Lampic, Sundling, and Falla duked it out for the remaining spots in the final.

In the final sprint, Lampic and Sundling created a gap to Falla, surging to a photo finish. Lampic took second, Sundling third, and Falla crossed a second behind in fourth. As the pace was hot, all four women moved on. 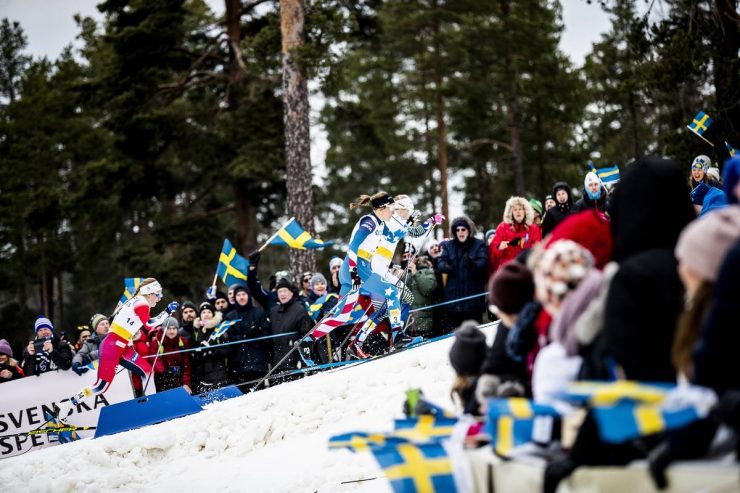 For Caldwell, the next round was spicy. With a misstep on a punchy climb, Sweden’s Anna Divyk dropped to her knee, catching Caldwell’s arm and pole with hers and robbing some of the American’s momentum. Climbing halfway, Caldwell was trapped on the inside of a left turn. Skis were stepped on, racers were slipping, but she made it through. Calm and collected, she dropped into a tuck and glided into third as they headed for the final climb.

Attacking the double pole sprint down the straightaway, Caldwell challenged Norway’s Astrid Jacobsen for the second guaranteed spot in the final. Caldwell threw her boot early, with Jacobsen’s foot matching hers at the line for a photo finish. After review, the two could not be differentiated. It was declared a perfect tie, down to the hundredth. Though their times were too slow for a lucky loser, both women advanced, making it a final of seven women. 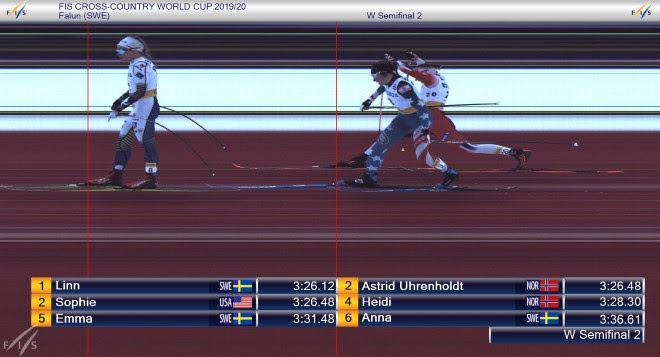 Captured. A perfect tie between Sophie Caldwell and Astrid Jacobsen during the semifinal of the classic sprint in Falun. (Photo: Screenshot FIS-ski.com)

Six women across, with the second lucky loser, Falla, in the second row behind Svahn. And off they went.

The two Swedes, Svahn and Sundling, led the charge into the first climb, Lampic occupying the outside lane. Around the sweeping turn they went unscathed, Sundling continued to push the pace up the next climb, with Lampic losing grip alongside her. The lead group was four deep in the final climb and into the downhill towards the stadium.

Three across, Svahn, Sundling, and Nepryaeva powered down the final stretch as the crowds leaned in with bated breath. In the final meters, Svahn crept just ahead of the other two, throwing her boot for the win in 3:23.54. At her heel, the boots of Sundling and Nepryaeva slid across in a photo finish. It was deemed that the Russian was 0.02 seconds ahead of the Swede, taking the second spot on the podium. Both women were within a tenth of a second of Svahn. 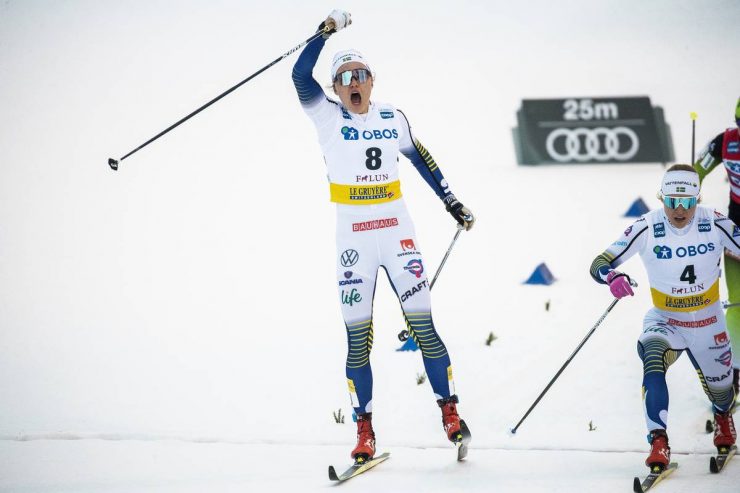 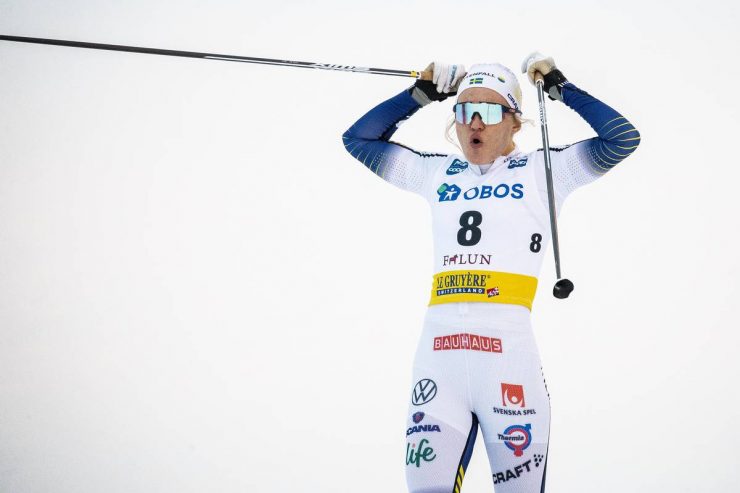 “It’s fantastic. I wanted to win so, so much today,” gushed an out of breath Svahn during her interview with FIS. “I pushed so hard on the final, and managed to win. Before the start, I saw Maiken behind me and I thought, ‘What is happening?’ So it was special, but so nice to compete in my hometown and to win. And to get Jonna on the podium as well, we are a strong team.”

A unique statistic, Svahn is the second woman to win three individual World Cup sprints before her 21st birthday, which she celebrates in September.

After the race, Caldwell discussed her three week training block in Seefeld, Austria, interrupted by the races in Oberstdorf, Germany, where she finished fourth. She also spoke to the tangle with Divyk and how she stayed relaxed in order to ski the downhill well in order to reconnect with the group. She also discussed the evolution of her career and the effect of her plans to head back to Vermont after the FIS Ski Tour, missing the city sprints in Drammen, Norway to focus on the sprints in Quebec and Minneapolis. 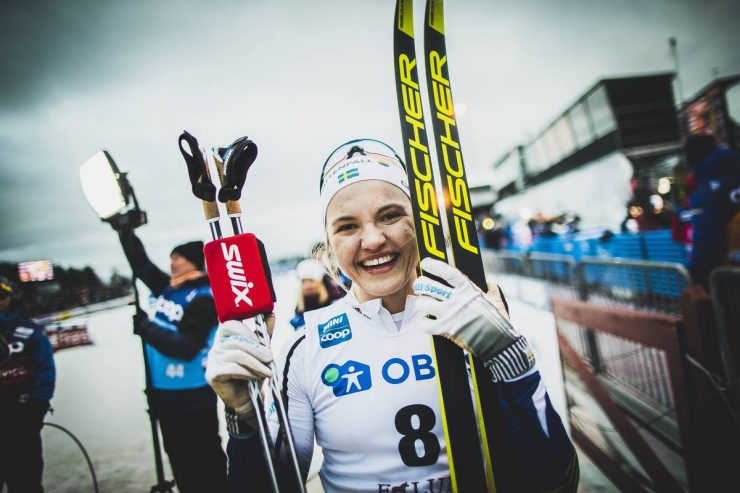 Three other Americans headed into the heats with Caldwell. Sadie Maubet Bjornsen qualified in 11th. Racing in the 4th heat, Maubet Bjornsen tucked into the middle of the group. As they reached the swooping icy found along the downhill halfway, the women began pumping the brakes to stay upright, and Maubet Bjornsen was nearly slingshot off course into the banner lining the outer edge of the turn. She regained her composure and made it through the remaining turns with more speed. However, she was not able to catch the leaders and finished 4th in the heat, 17th overall.

“I always struggle a bit in these conditions, so I didn’t have a star performance, but felt proud that I fought back even after coming dangerously close to falling on the fast, crazy corner,” Maubet Bjornsen emailed after the race. “At one point I feel like I skied the side of the fence, so I sure hope Bode Miller was watching me try to reinact his famous move!

“Despite a 17th place classic sprint, I am still believing in my body’s ability to feel sharper and shaper going into the Tour de 2020. Sometimes when I have been training at altitude, it takes my muscles a bit to get firing on high speed. The Swedes sure managed to find that speed today, so I will have to kick it into gear quickly to keep up! I look forward to another wild ride tomorrow for the 10k mass start. My goal is to stay on my feet, and find some of my gears that I know are in there!” 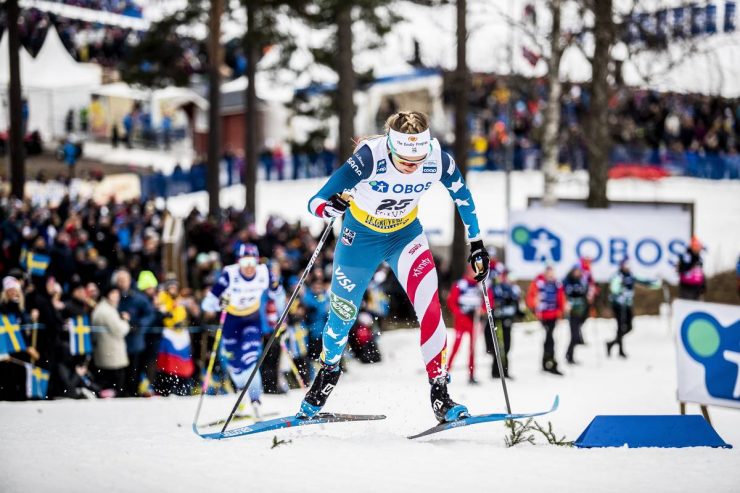 Jessie Diggins fights through the quarter final of the classic sprint in Falun, Sweden. (Photo: NordicFocus)

Jessie Diggins was the next American qualifier in 25th. She too finished 4th in her heat, ending the day in 20th. In a post-race call, Matt Whitcomb explained that Diggins was fighting a “tweaked neck”, but with the help of Zuzanna Rogers, the team therapist, it is showing improvement.

Whitcomb provided further insight into Diggins’ day, her likelihood to rebound tomorrow, and how the course and conditions affect the type of athlete that can excel on the tracks of Falun.

Hailey Swirbul qualified just behind Diggins in 28th for her third set of World Cup points. She landed in the top-30 on both days in Davos, Switzerland. Swirbul raced in the first heat with Caldwell, where she finished 5th in the heat and 25th for the day. 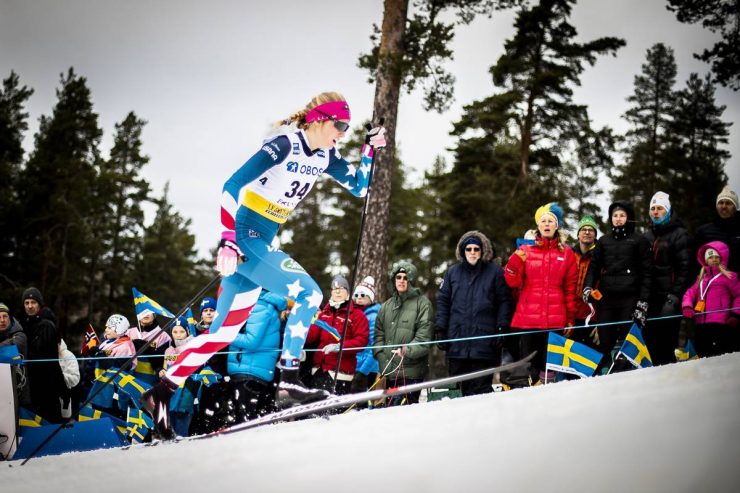 “I am learning so much with every World Cup race this season,” wrote Swirbul in a post-race email. “I thought my skis and support were great today on the tricky course. It was sweet to race in a heat with Sophie and learn from the best in the world up those climbs! I hope to get another opportunity to mix it up in the heats soon.”

For Canada, Maya Macisaac-Jones qualified in 23rd and raced in the fifth heat, which was won by Svahn. She was fifth in the heat, ending her day in 24th. 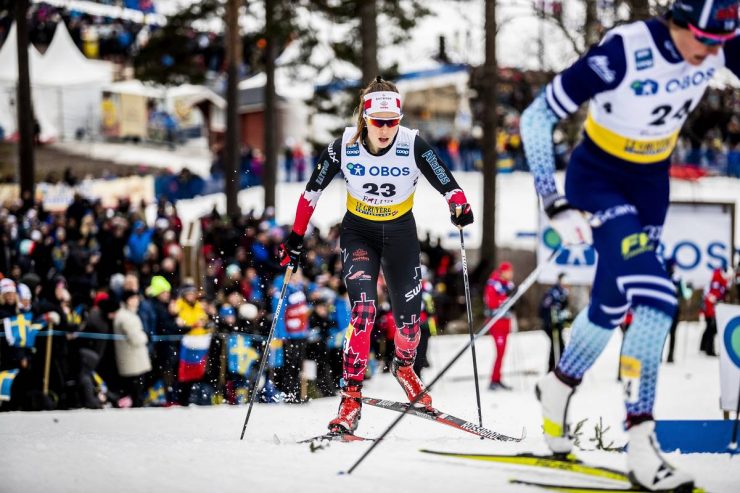