For many years the U.S. Biathlon Association (USBA) has invested in talent. Athletes who demonstrate ski-speed and a knack for shooting on the firing range receive what amounts to a cushioned sport-specific transition. In this case, Luke Brown (Crosscut Mountain Sports/USBA) and Zane Fields (USBA) are the latest cross-country athletes embraced by the USBA’s X-Team. 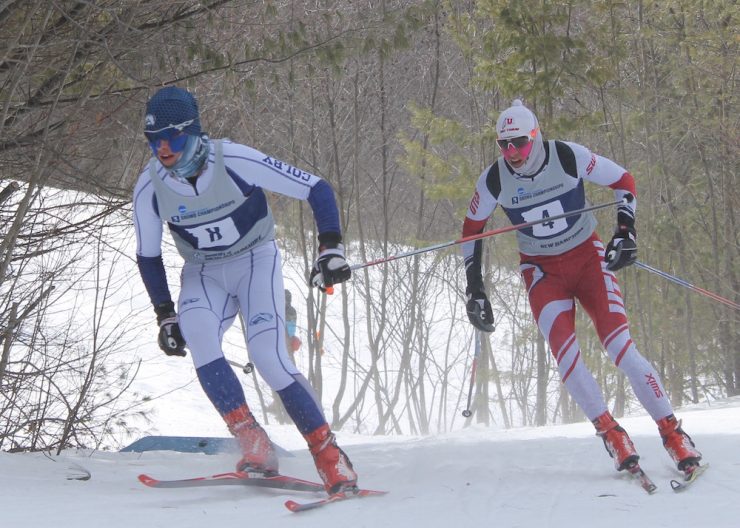 Zane Fields (8) racing at the 2017 NCAA Championships. Fields is now a member of U.S. Biathlon’s X-Team.

Brown, who is in his second year removed from Dartmouth, and Fields who is fresh off a four year stint at Colby College, both earned spots on the X-Team after a USBA development camp in June.

Five athletes were invited to the camp with two ultimately offered support to develop as biathletes under USBA’s guidance.

“We are seen as skiers who have shown promise skiing athletically but don’t have the rifle skills because we have not been exposed to them yet,” Fields said from his intermittent base in White River Junction, Vermont. “I guess it is a fast track to possibly the IBU Cup and World Cup because they know we have the fitness and we just need to train the shooting.”

The X-Team designation, in fact, comes with ample support for Fields and Brown. The team designation affords the two skiers a safe way to make a career switch. Former USBA athlete and current USBA Development Manager Tim Burke will assist with training plans. Each skier has been offered free room and board for a year at the Olympic Training Center (OTC) in Lake Placid and opportunities for free training camps. The heavy cost of a rifle, which can amount to four to six thousand dollars, has been softened by an optional lease to own program offered by the team.

“I am excited because it lets me try biathlon in a super safe way,” added Fields. “If I have a bad year it is OK because I did not put myself in a $10,000 dollar hole. I would be more stressed to perform if I were paying a whole lot.”

Fields will mix developing as a biathlete with racing select cross-country events this season. He plans on entering the U.S. Cross-Country Championships with a goal of making U23 Worlds.

“The way I see it, biathlon is acting for me as a pro-team would,” said Fields. “They are offering me great support, coaches, training trips. Even more so with biathlon, they are excited to have me still focus on skiing since we have limited biathlon racing opportunities in North America. I think there are two or three NorAms then US Nationals in March.” 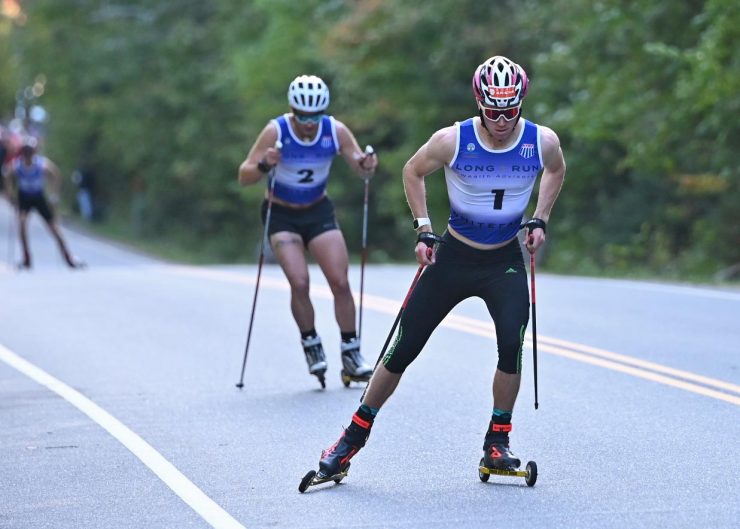 For his part, Brown will be based in Bozeman, Montana with intermittent but longer stays at the OTC. He will be jointly coached by Burke and Crosscut Mountain Sport’s Seth Hubbard and Crosscut’s assistant coach Nick Michaud. (Michaud is also a development coach for US Para Nordic.)

“I am training fully for biathlon with that as my focus with the goal to make IBU cups,” Brown said. “And if I do, that is awesome. It is also my first year of biathlon, so I am not necessarily expecting to. So if I do not make IBU Cups, I will do a mix of domestic biathlon races and SuperTour and other cross-country skiing races. I am leaving that door open but my focus is on biathlon.”

Brown explained he had been to a USBA talent ID camp prior to college. He had also spent a few summers learning how to shoot while a middle school skier. Brown’s older brother Jake is a member of USBA’s National A Team, and trains with the Craftsbury Green Racing Project.

“I have talked to Jake about it a lot and it has been super awesome to have biathlon to connect with him over and also learn from him,” said Brown. “It also gave me a greater understanding of what the transition was going to be like. I got a front row seat when he did it coming out of NMU and he lived at the OTC. It also, I think, prepared me a bit to know the amount of work that goes into transitioning into biathlon. It is not easy — it has taken him a couple of years of very hard work to get to where he is.”

Fields echoed the notion that although the two sports are linked through skate skiing, he understands the need to reset when considering how he paces his skiing while learning to center himself on the range.

“I simply thought I can ski fast, I’ll just make up the time hammering while skiing, and hammer in and out of the range,” said Fields. “As I have shot more and more over the last month or two, I am learning to understand how much I should slow down before the range so I can prepare myself to shoot. I am realizing that poor shooting is exponentially more of a penalty than if you are simply slower at skiing. It is worth killing 30 more seconds before the range to go slow and then hitting all your shots versus running in and blasting them off and hoping you hit.”

Both Brown and Fields are currently living and training in Utah and will contest the USBA Fall Festival and IBU Cup Trials which begin October 24, at Soldier Hollow.