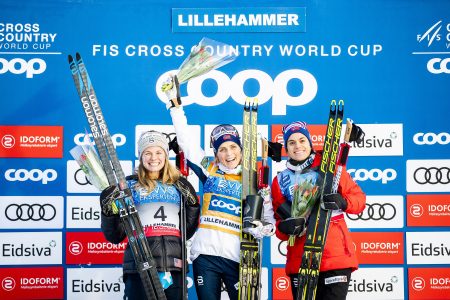 This week’s episode of the Therese Johaug show featured a clinic in her signature event, the 15-kilometer mass start skiathlon in Lillehammer, Norway. Before today, the two-time World Championship gold medalist had made the podium in 13 of her 14 World Cup skiathlon starts (six of those were wins), failing only in Oberstdorf, Germany during the 2011 Tour de Ski.

Her strategy was familiar. Johaug set the pace from the gun, attacking the first climb out of the famed Birkebeiner stadium. She pulled away from the field with her usual high tempo ferocity. She created a nearly 14 second gap by the 2.4 k checkpoint, which expanded to 30 seconds at the halfway mark.

Coming into the exchange zone, Johaug ripped open her pole straps with her teeth as she glided into her gate. She then stepped out of her classic skis into skate without pause. Celebrating as she skied through the stadium 7.5 k later, Johaug stopped the clock at 42.35.3. Her lead had grown to over a minute. 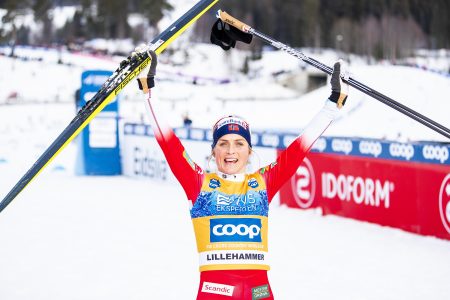 Notching her seventh World Cup victory in the skiathlon and her 100th career World Cup individual distance podium, Johaug is closing on Marit Bjørgen’s record of eight skiathlon wins and 110 podiums. This was news to Johaug when she spoke to FIS at the finish.

“That was a big surprise to hear,” she said with raised eyebrows. “It was really good to celebrate with a first place today and also in my hometown, Lillehammer. It was a really good day today. My skis were perfect and my shape has been really good after [the Ruka Triple in] Kuusamo, so I could just go out there and enjoy it because I didn’t feel that I used so much energy. I am really happy.”

Based on Johaug’s trajectory, it does not seem to be a question of if, but when these records will be broken — the latter possible within the 2020 season. Just over half (51) of her World Cup podium finishes have been wins, and she has not failed to land on the podium in a distance race since before her doping suspension in 2016. She won every individual distance race during the 2018/2019 season. She was beaten only once and that occurred on the icy tracks of the Plains of Abraham during the World Cup finals in Québec City where Stina Nilsson, who began the pursuit start race with a lead of 1:45, held her off for 10 k. Johaug still skied the fastest time of that day.

Hot off a strong showing in Ruka, a duo of candy-cane striped left legs led the charge in the chase pack, namely Jessie Diggins and Sadie Maubet Bjornsen. The Americans stayed stride for stride at the front with Norway’s Heidi Weng and Russia’s Natalia Nepryaeva through the 3.5 k checkpoint, when Diggins took hold of the pace and surged to begin spreading out her peers. With Diggins went Weng and her Norwegian teammate Astrid Jacobsen, along with a string of Swedes: Moa Lundgren, Charlotte Kalla, and Emma Ribon. 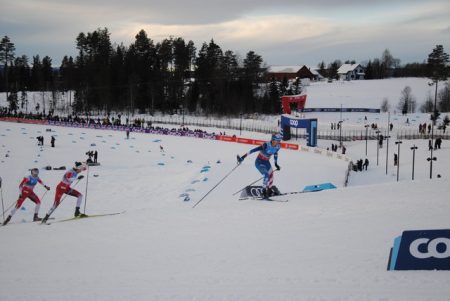 Jessie Diggins charges from the exchange zone ahead of Norway’s Heidi Weng and Astrid Jacobsen during the 15-kilometer skiathlon in Lillehammer, Norway. (Photo: Aleks Tangen)

Diggins entered and left the exchange zone ahead of her competitors, closely followed by the Norwegians and Swedes. The American pressed her foot to the accelerator, again surging to spread the chase group. Weng matched Diggins’s tempo and energy on the climb away from the stadium and tucked into her draft on the descent into the woods.

From there, the lead exchanged hands a few times leading into the fourth and final time up the longest climb with two k’s to go. Devon Kershaw referenced this hill when he explained is one of the hardest courses on the World Cup, featuring crippling climbs where skiers “will fall apart”.

It was here that Diggins made here move. She stepped around the Norwegian, out matching her tempo as they climbed steeply and transitioning into a strong V2. Trusting her downhill strength, Diggins continued to hold off her pursuer through the descending 400 meter reprieve.

In a flash of V1, Diggins dropped Weng for good on the final steep climb with 500 meters to go. She flew down into the stadium and powered down the straightaway to a comfortable second place finish (+1:08.3), eleven seconds ahead of Weng.

After sliding across the line, Diggins collapsed in relief. Johaug, who by this time had caught her breath and donned her puffy jacket, gave the American an encouraging and celebratory pat on her back.

“I was trying to keep up with you and I was like, ‘Buh bye.’” Diggins laughed as she congratulated Johaug. 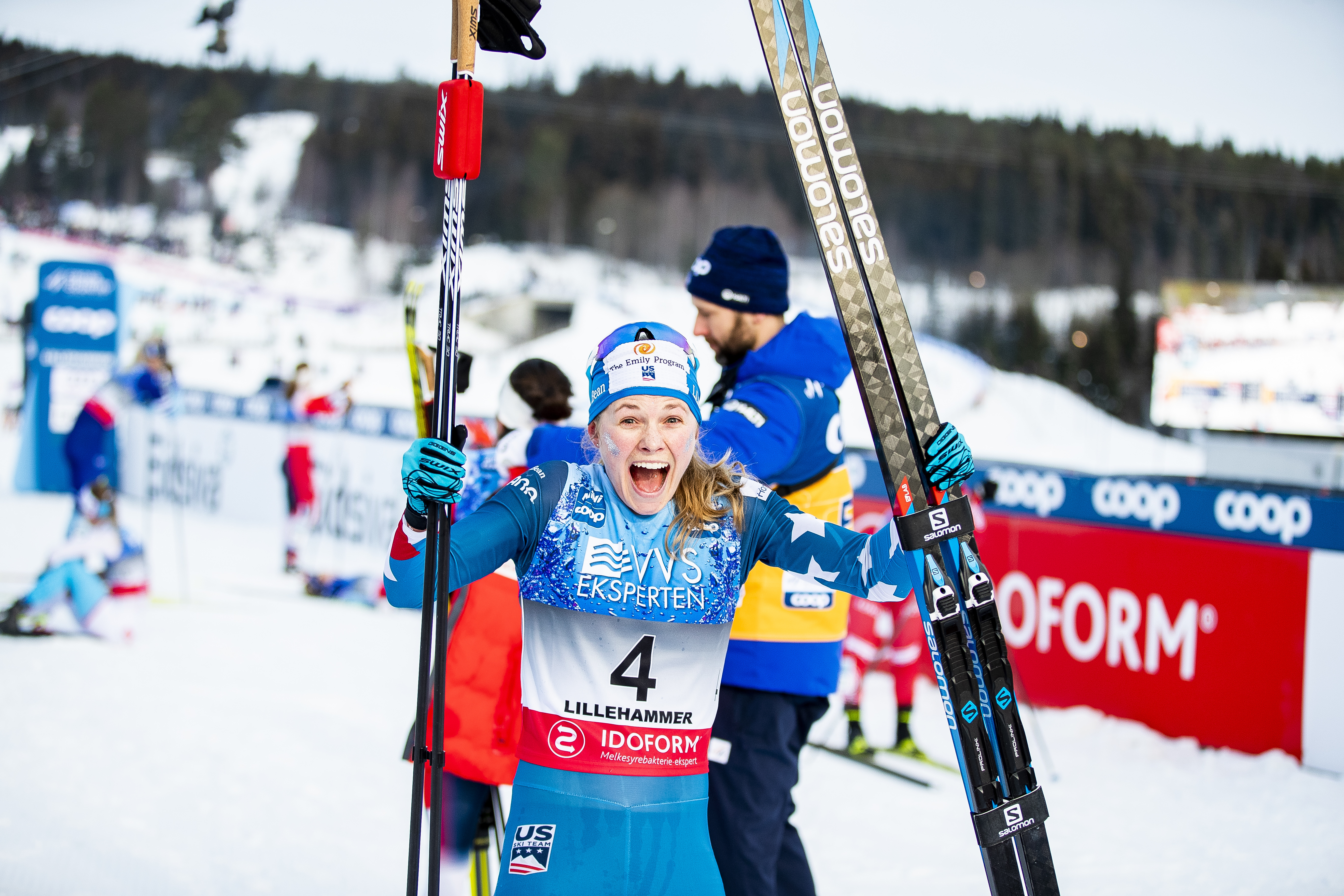 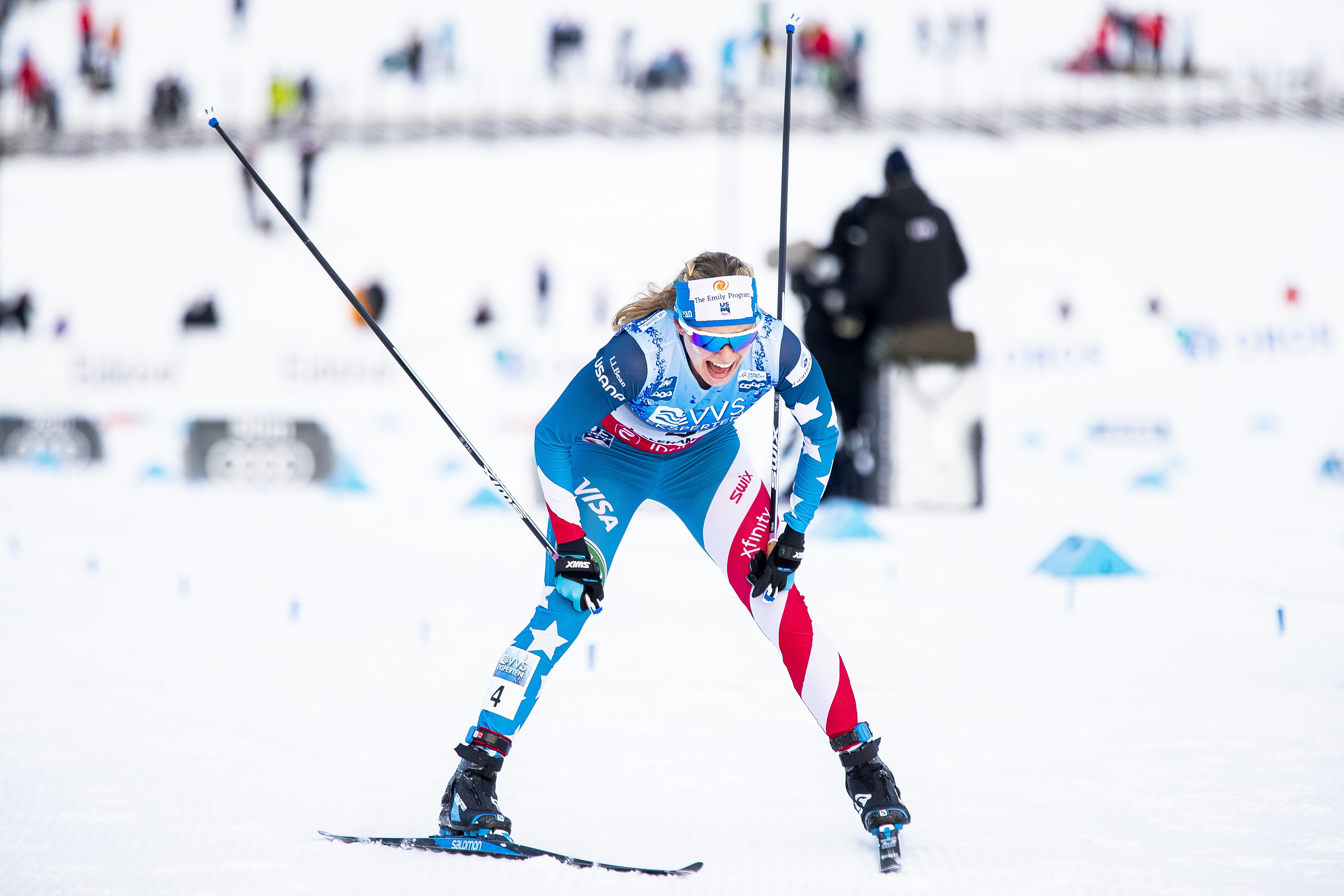 Jessie Diggins gasps for air after solidifying her second place finish at the 15-kilometer skiathlon in Lillehammer, Norway. (Photo: NordicFocus)

“I generally prefer classic as opposed to skate, but I had new and fun feelings today,” Maubet Bjornsen wrote in an email to several news outlets. “Not only did I enjoy the skate portion more, but I felt really strong climbing. I am walking away from today with new confidence, and excitement. To finish the day within sight of the podium fight on a less than perfect day is a good sign.” 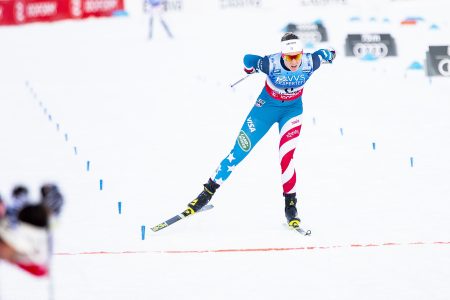 Taking a similarly patient approach, Rosie Brennan steadily turned up the dial in her race, cautious of burning too many matches early in the grueling terrain. At 4.6 k, Brennan sat in 21st, moving up one spot before the exchange. She picked up another two spots by 11.3k, and another two by the finish. Brennan crossed the line in 16th (+3:10.0).

“Today was a solid race, not my best and certainly not my worst,” wrote Brennan to several outlets. “I was struggling in the classic, just not finding the relaxed good feelings you want. I couldn’t hang with the front group, which I was disappointed by, but after I switched to skate, I found better feelings and was able to pick some people off. Unfortunately, I let a little too big of a gap open up to the big group in front so there was only so many people pick off. This course is one of the hardest on the circuit and you really have to be on your A-game to pull of good things here. I wasn’t quite there, but I am satisfied with the result given my feelings out there.” 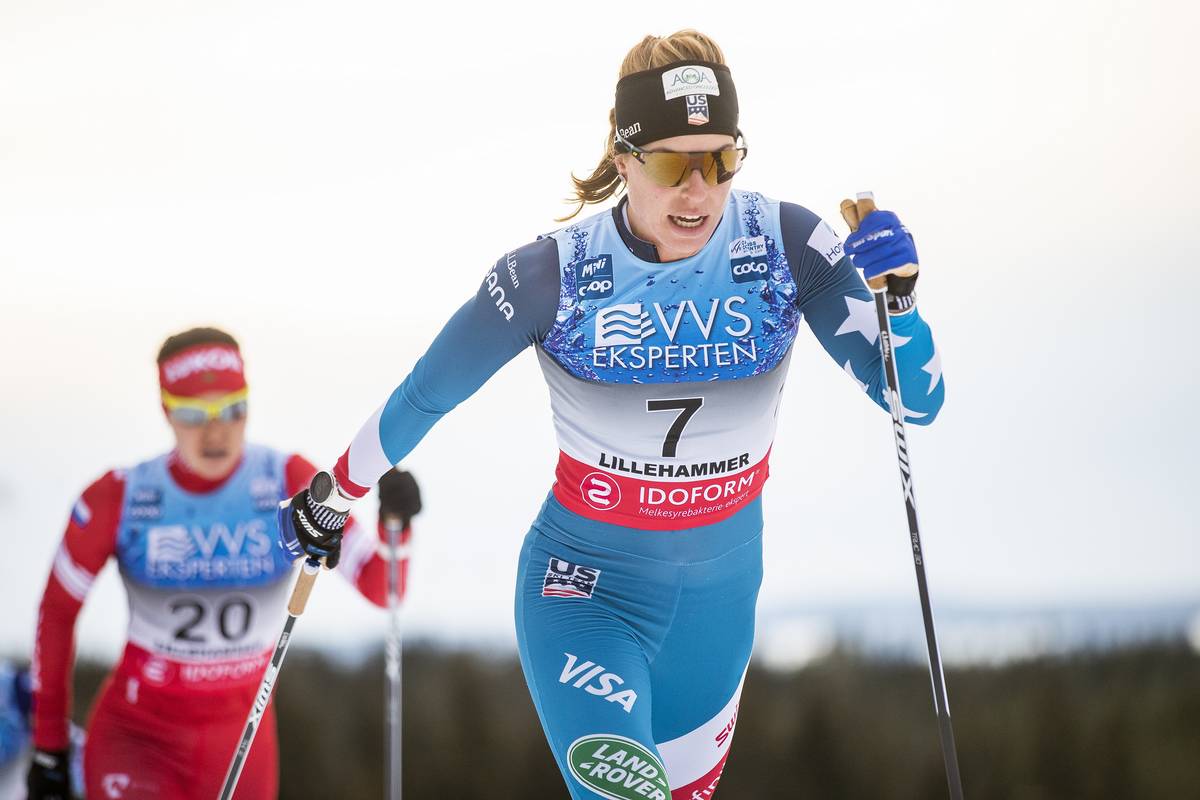