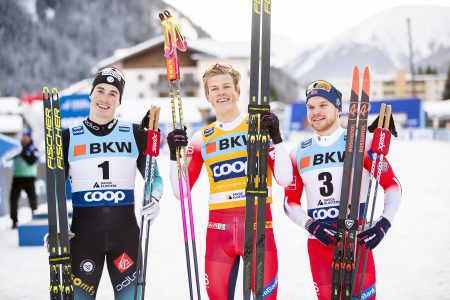 Davos, Switzerland: gifted athletes, throngs of spectators lining the course, plenty of Vitamin-D and a spectacular day for the 1.5-kilometer freestyle sprint. Racers chased down and skied away from their long afternoon shadows as the sun moved across the cloudless bluebird sky.

The crowds were in for a treat. In sprint racing, heats often have significant variance. Some will be fast, some will be slow with a final upsurge in intensity at the end. In today’s event, heats were fast and tight. Winning times were comparable, lucky losers waited with bated breath through the end.

Improving upon their performance in the opening classic sprint in Ruka, two Americans qualified for the heats. Simi Hamilton qualified in 8th and Kevin Bolger in 30th. 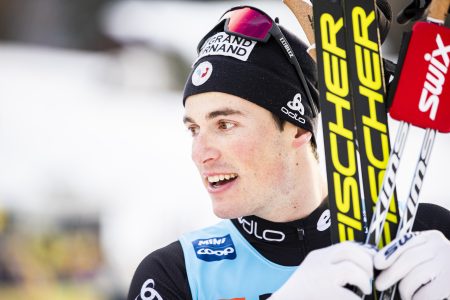 In the first heat of the quarterfinals, Johannes Høsflot Klæbo, who had qualified in 5th, threw down against France’s Lucas Chavanat, who was the top qualifier. Perhaps making a statement, Klæbo set the tone of the heat, quickly moving to the front and holding his position to comfortably take the heat with Chavanat behind him.

During his round, Hamilton marked the leaders, the Italian favorite Federico Pellegrino and Erik Valnes of Norway. Hamilton maintained contact throughout, fighting through the finish to place third in his heat. His time survived the three subsequent heats each by a fraction of a second to advance as a lucky loser. 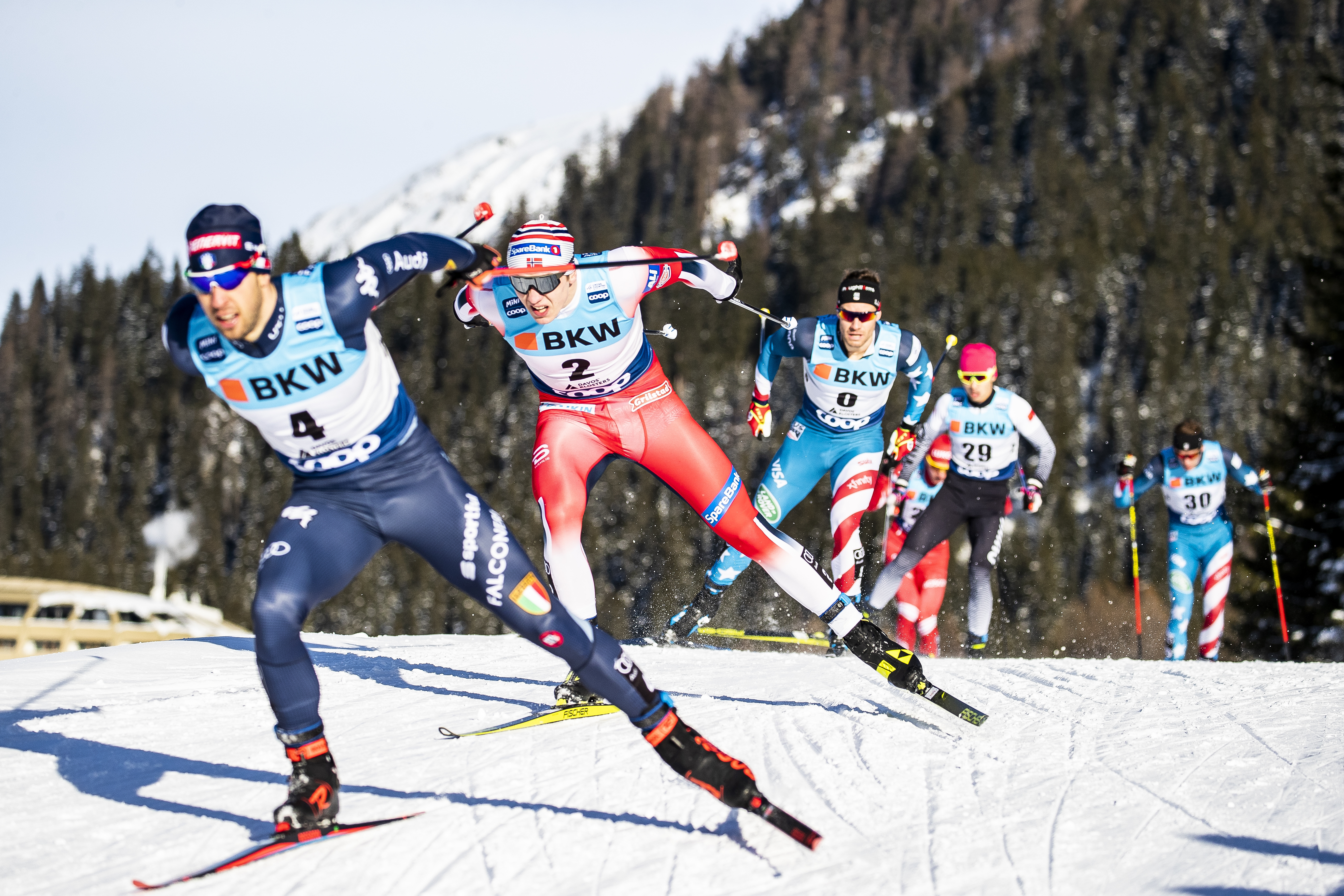 Italy’s Federico Pellegrino leading Erik Valnes of Norway in the quarterfinals of the 2019 skate sprint in Davos, Switzerland. (Photo: NordicFocus) 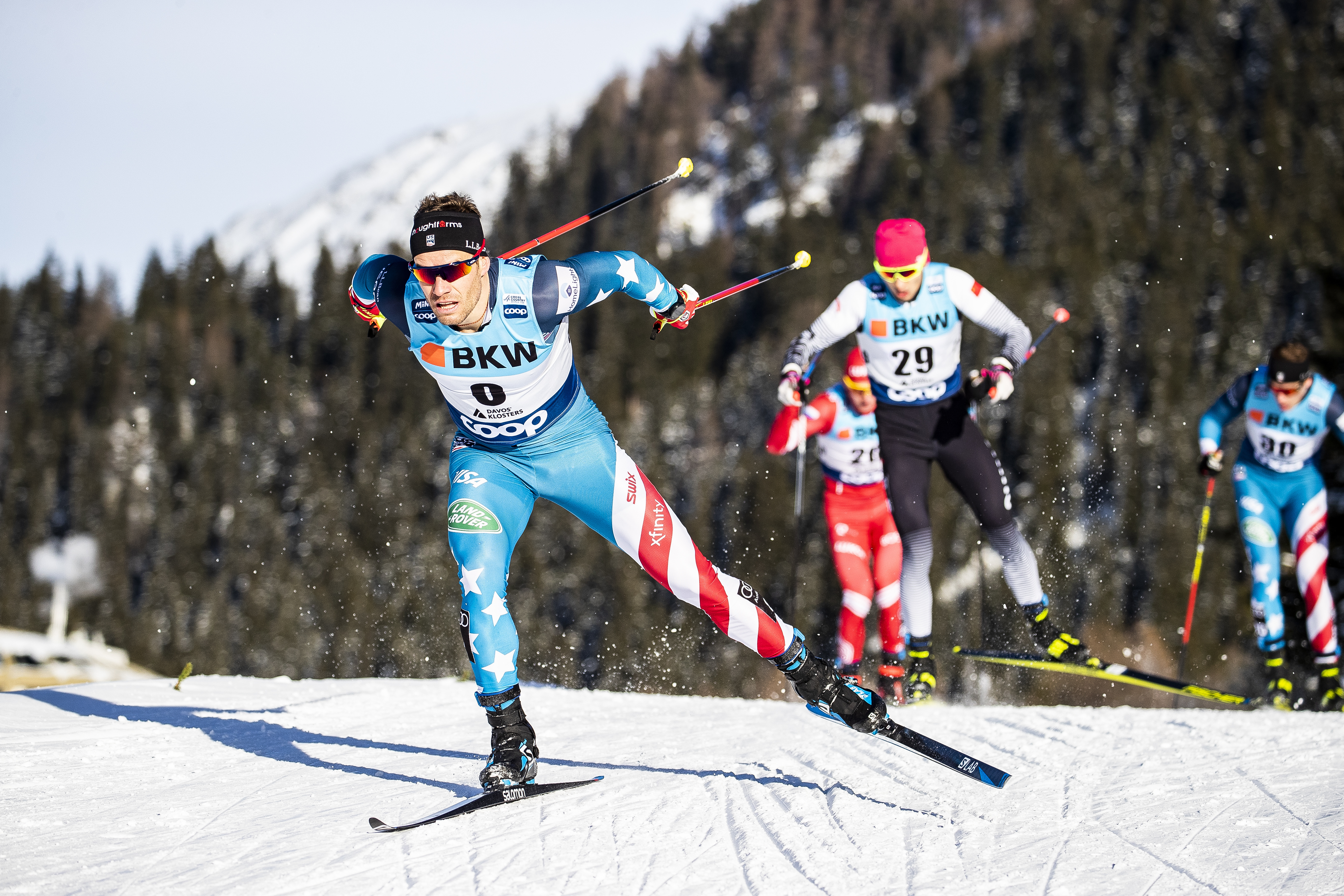 Simi Hamilton hunts down the leaders in the quarterfinal of the 1.5-kilometer freestyle sprint in Davos, Switzerland. (Photo: NordicFocus)

Onto the semis. In the first heat, Chavanat took control from the gate and held it through through the last turn, the stacked group of competitors tucked in closely behind him. Klæbo stayed tucked into the middle of the pack. In the final straightaway, Klæbo swung around overtaking his teammate Valnes in the final meters, besting Chavanat by a toe.

An error in Devon Kershaw’s prediction of a Pellegrino vs. Klæbo final, the Italian finished fourth in the heat and did not advance. 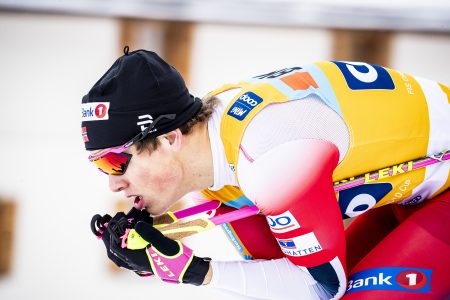 In a tuck and on the hunt. Not an easy victory for Johannes Høsflot Klæbo during the 1.5-kilometer freestyle sprint in Davos, Switzerland. (Photo: NordicFocus)

In the second wave, Hamilton stayed just behind the Norwegian leaders Håvard Solås Taugbøl and Sindre Skar — in the mix but out of trouble. In the final stretch, a pack of five contenders charged toward the finish. Crossing in a photo finish with Gleb Retivykh of Russia, Hamilton was deemed 4th and advanced again as a lucky loser.

At the start of the final, none of the men took the reigns and the first climb looked calm. Chavanat emerged at the front after the descent, but the field behind him stayed tight. Dueling once more, Klæbo tucked in just behind Chavanat, marking him closely and staying low in his draft.

In the final high-velocity stretch, Klæbo and Chavanat were neck-in-neck as the crowd roared. Leading by inches, Klæbo charged with unmatched tempo. He added two jump skates before throwing his boot across the line ahead of the Frenchman in a photo finish. Chavanat was just 0.05 seconds behind Klæbo. Laughing breathlessly, they embraced and congratulated each other at the finish. 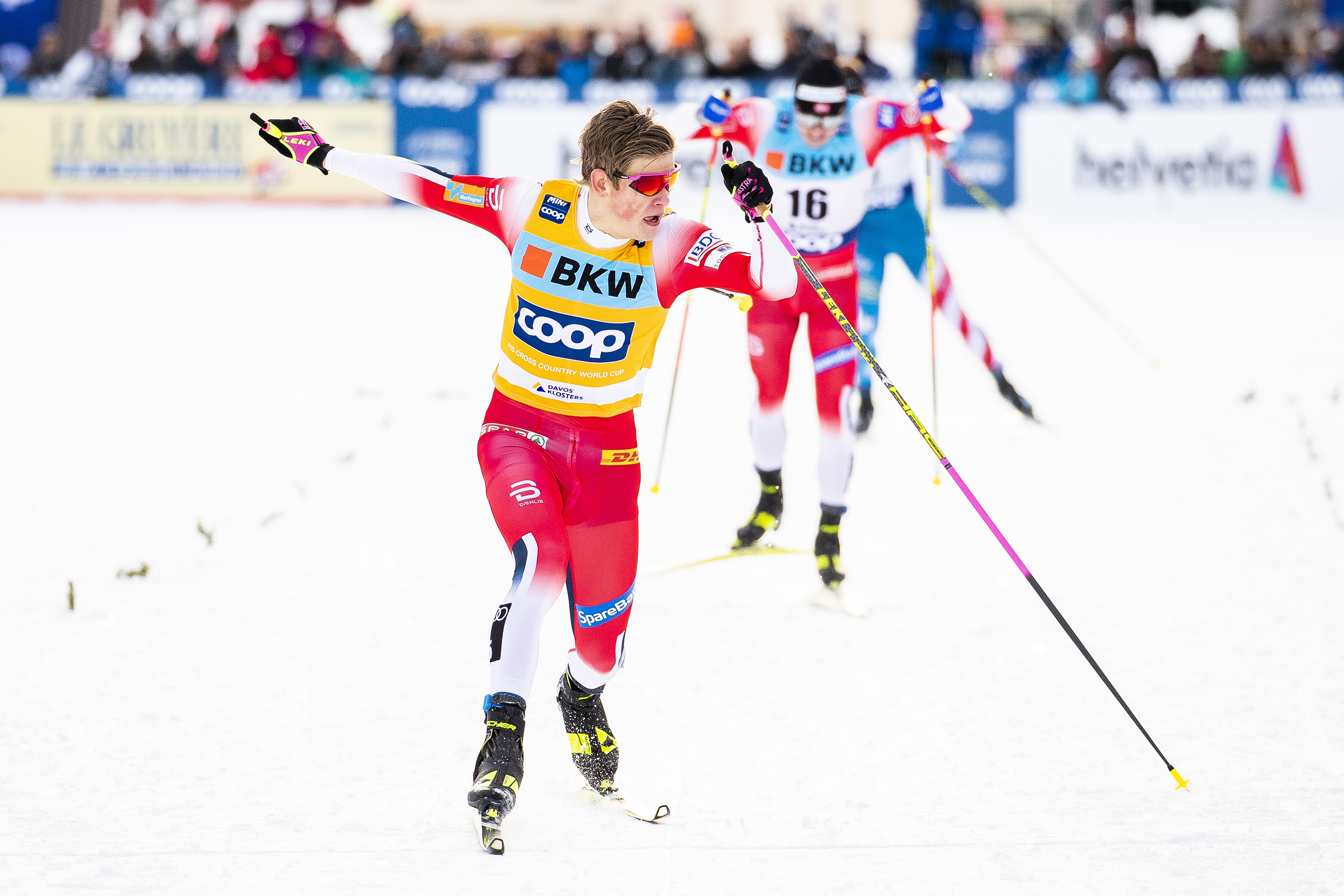 Johannes Høsflot Klæbo of Norway checks his position relative to his opponent, Lucas Chavanat of France, at the finish of the 1.5-kilometer freestyle sprint in Davos, Switzerland. (Photo: NordicFocus) 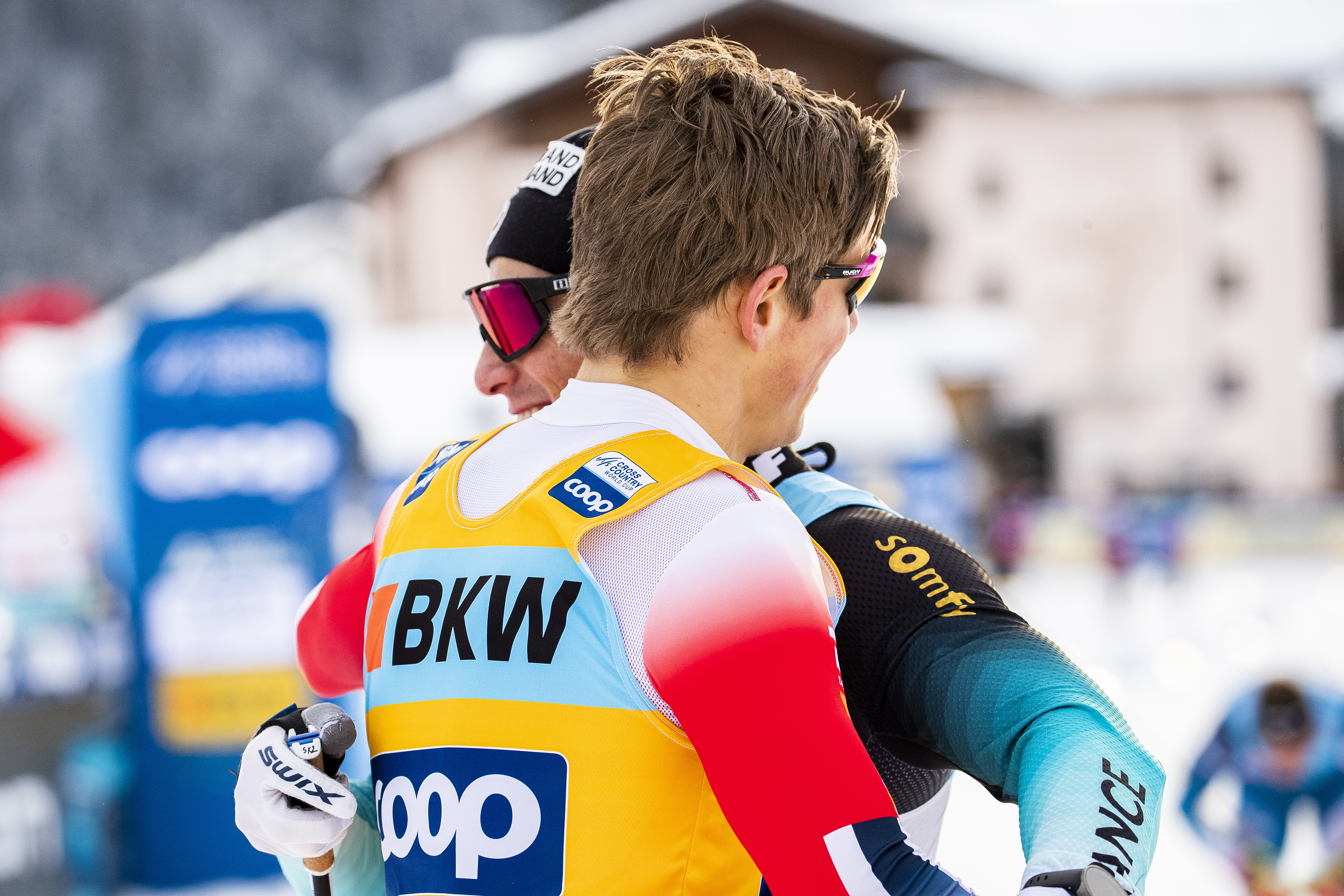 Johannes Høsflot Klæbo (NOR) and Lucas Chavanat (FRA) congratulate one another after a photo finish in the final of the 1.5-kilometer freestyle sprint in Davos, Switzerland. Klæbo won by a margin of 0.05 seconds. (Photo: NordicFocu)

“It was a really tough fight and Lucas was very strong all day,” Klæbo told FIS at the finish. “It was really cool to see that he was that strong again. In the quarter-final, the speed was really high and I was trying my best at a final and was a bit in front of him, but it was a really good fight.” 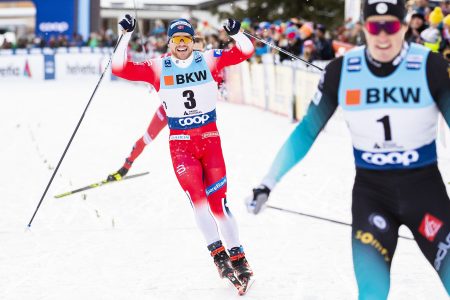 In his interview with FIS, the sprint champion was also asked about sharing the podium with his teammate.

“It was really cool to have Håvard on the podium today,” said Klæbo. “I think in Norway we are quite happy today.”

Hamilton has a history of racing well in Davos. He placed 12th last season and 9th in 2017. At 5,100’ Davos is one of the highest elevation venues on the World Cup, but much lower than his 8,000′ hometown of Aspen, Colorado.

In his post-race interview, Hamilton shares why this course suits him well and how this performance gives him confidence on the season ahead.  He also discusses his opening performance in Ruka and the tight spread throughout the heats. 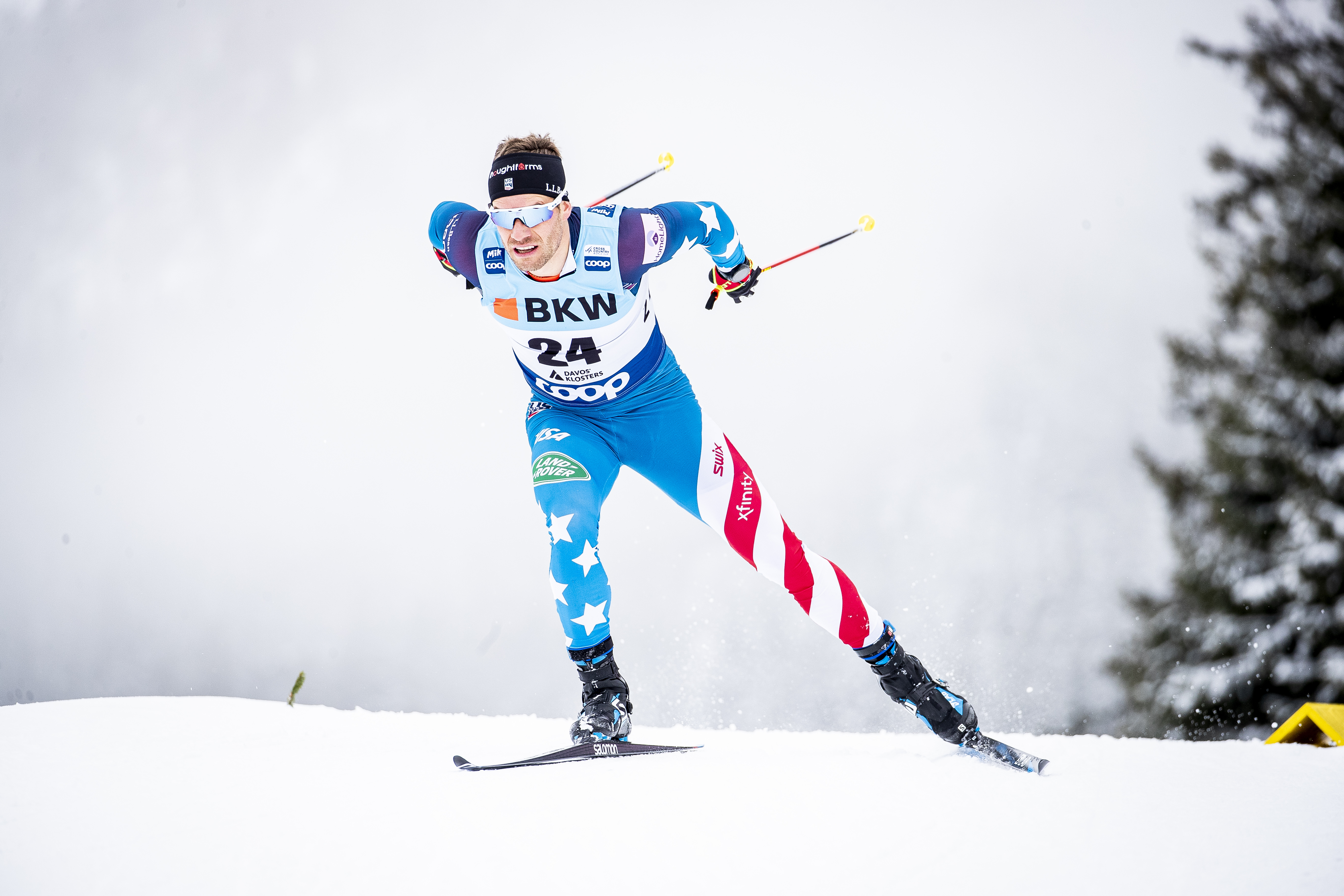 Simi Hamilton skis to an 8th place result in the qualifying round of the 1.5-kilometer freestyle sprint in Davos, Switzerland. (Photo: NordicFocus)

Racing in the speedy second heat of the quarterfinals with Hamilton, Bolger was eliminated after finishing sixth in his heat and finished 30th.

“It was a step in the right direction,” wrote Bolger in an email. “Last year I came here and qualified 31st so to be on the right side of that this year felt good! I’ve been struggling a bit to find my form so to get into some heats today is a big confidence booster going forward.

“Simi and I had a ripper of a heat and it was really awesome to see him go all the way through to the final,” he continued. “I wish I could have joined him but [it will happen] in time. I’m excited to find some more fitness and keep progressing into semi-finals and hopefully some finals this year!” 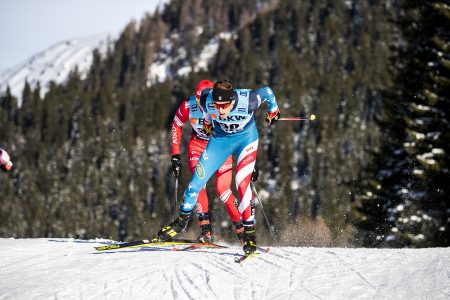 Kevin Bolger crests the top of the climb during the 1.5-kilometer freestyle sprint in Davos, Switzerland. (Photo: NordicFocus)

Whitcomb gives depth to Bolger’s performance and the role it plays in terms of his starts for the season.

Outside of the heats, Logan Hanneman finished in 31st after skiing the same qualifying time to the hundredth of a second as Bolger (+6.86). (It apears that in the event of a tie, the skier with the lower FIS points is the winner.) Canada’s only entrant Russell Kennedy finished 42nd (+8.07). 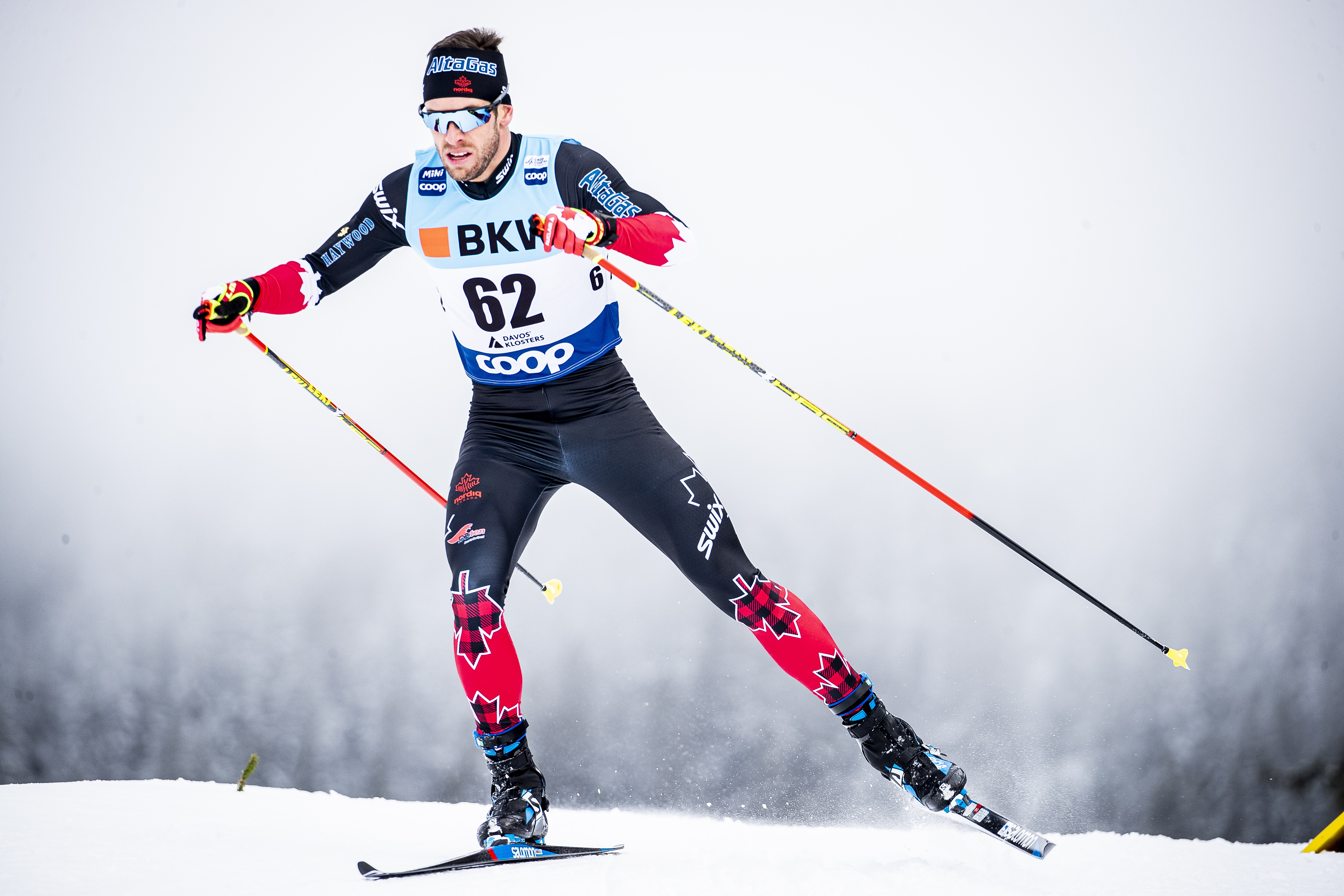 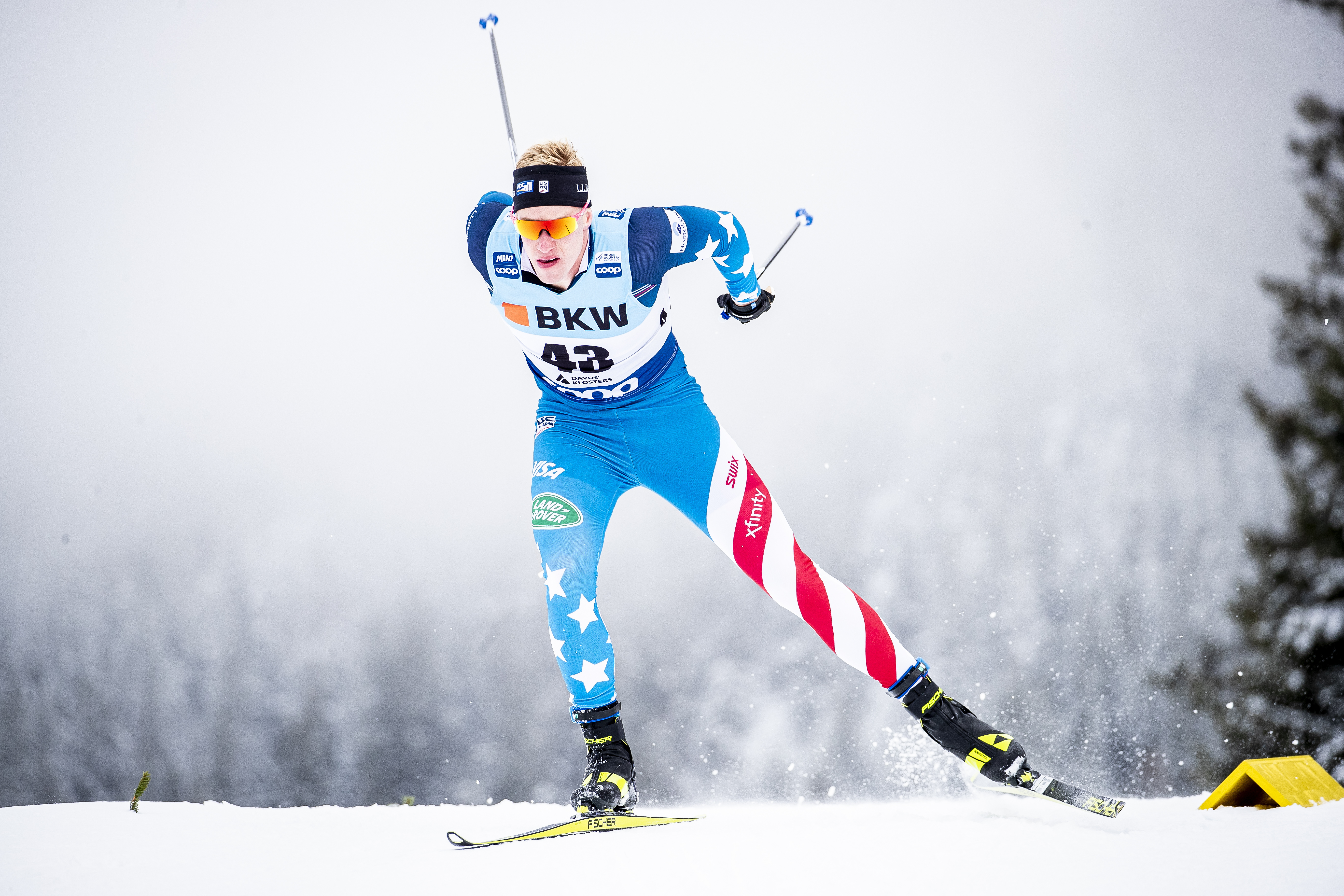 Logan Hanneman on course during the qualifying round at the 1.5-kilometer freestyle sprint in Davos, Switzerland. (Photo: NordicFocus)

Post-race, Whitcomb explains why the tie in the qualifier went to Bolger for who advanced to the heats.