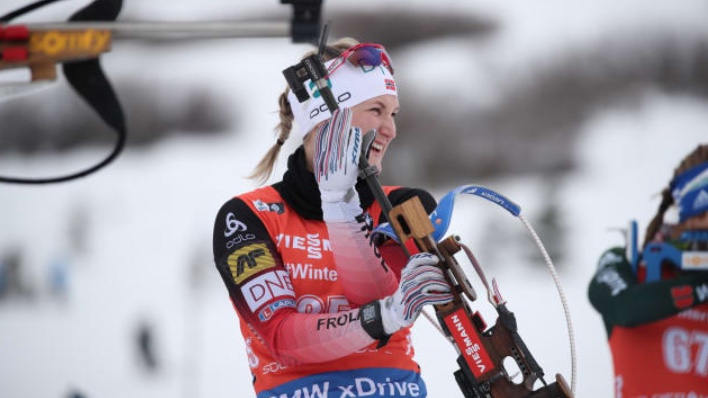 The name itself carries with it a reputation for high heart rates. Nestled on the East slope of Utah’s Wasatch Mountains, Soldier Hollow (SoHo), the sight of this week’s IBU World Cup races, features tracks well above 5,000 feet in altitude. Junior and senior skiers understand that a hard effort at SoHo come with a mandatory lactic acid tax.

Not since 2002 at the Salt Lake Olympics has the storied venue hosted an international World Cup level (cross-country or biathlon) race.

On Thursday, under overcast skies and amidst a venue overlooking a snowy Heber Valley, the women began the SoHo biathlon festivities with a 7.5-kilometer sprint.

Norway’s Marte Olsbu Røiseland won the race in a time of 19:47.6 minutes. The 7.5 k sprint features two shooting bouts, prone then standing, and Røiseland cleaned both on her way to the win. Following in second place 11.5 seconds back was Kaisa Mäkäräinen of Finland. Mäkäräinen missed one target in standing. Germany’s Franziska Hildebrand took the third podium spot while she cleaned on the range to stop the clock in 21.4 seconds behind Røiseland ‘s winning time.

Racing continues tomorrow in SoHo with the men’s 10 k sprint.