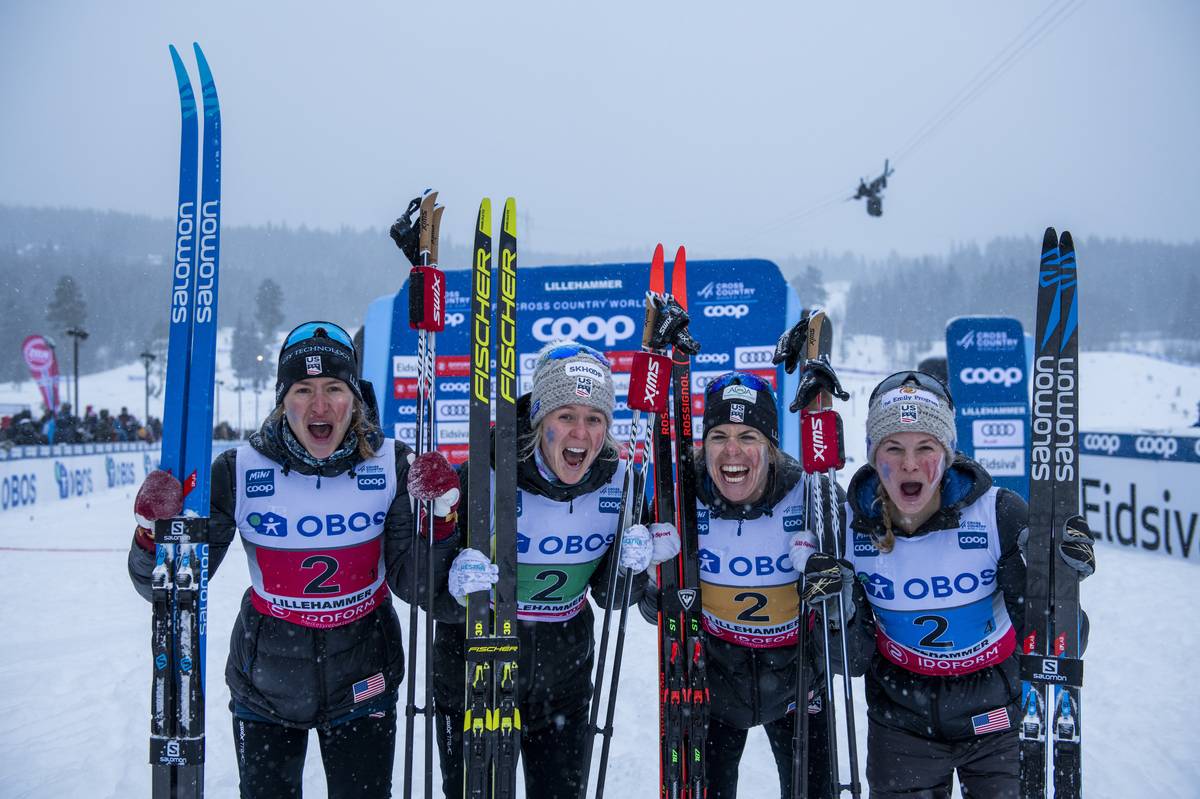 Athletes warmed up amidst fat falling snowflakes as a storm blanketed Lillehammer, Norway. The gun fired, and a flurry of this snow clouded the boots, poles, and relay socks as a wave of skiers strode their way up and out of the Birkebeiner Stadium for the first leg of the women’s 4 x 5-kilometer relay.

With outstanding performances in the first two World Cup race weekends, it is clear that the U.S. women are hot. They made their fitness and strength evident in back to back performances; three in the top 20 on day one in Ruka, three in the top 15 on day two, and three in the top ten in the final stage. Again in yesterday’s skiathlon, 2nd, 8th, 16th, Jessie Diggins, Sadie Maubet Bjornsen, and Rosie Brennan showed that they were ready to throw down in the relay and compete for a top-spot. With an 11th place finish in the classic sprint in Ruka and experience in the relay, Sophie Caldwell was selected for the fourth spot.

Despite this depth, the U.S. has struggled to land on the podium in the relay. Last year during the World Championships in Seefeld, a similar team (Julia Kern raced in Caldwell’s position) battled to rebound from eleventh a challenging first leg. Maubet Bjornsen and Brennan clawed up the ranks to hand off to Diggins in sixth, who could only pick off one additional team while struggling in the heat. The foursome finished fifth.

During the PyeongChang Olympics the year prior, Caldwell, Maubet Bjornsen, Kikkan Randall, and Diggins also raced to a gutsy fifth place finish, the best Olympic relay result for the United States. Here also the Americans struggled during the scramble leg. Caldwell started strong, knowing that on a good day she belonged with the leaders, but fell off the pace in the second half of her leg, tagging off over a minute behind in eleventh. Could the U.S. put together four strong legs in Lillehammer? 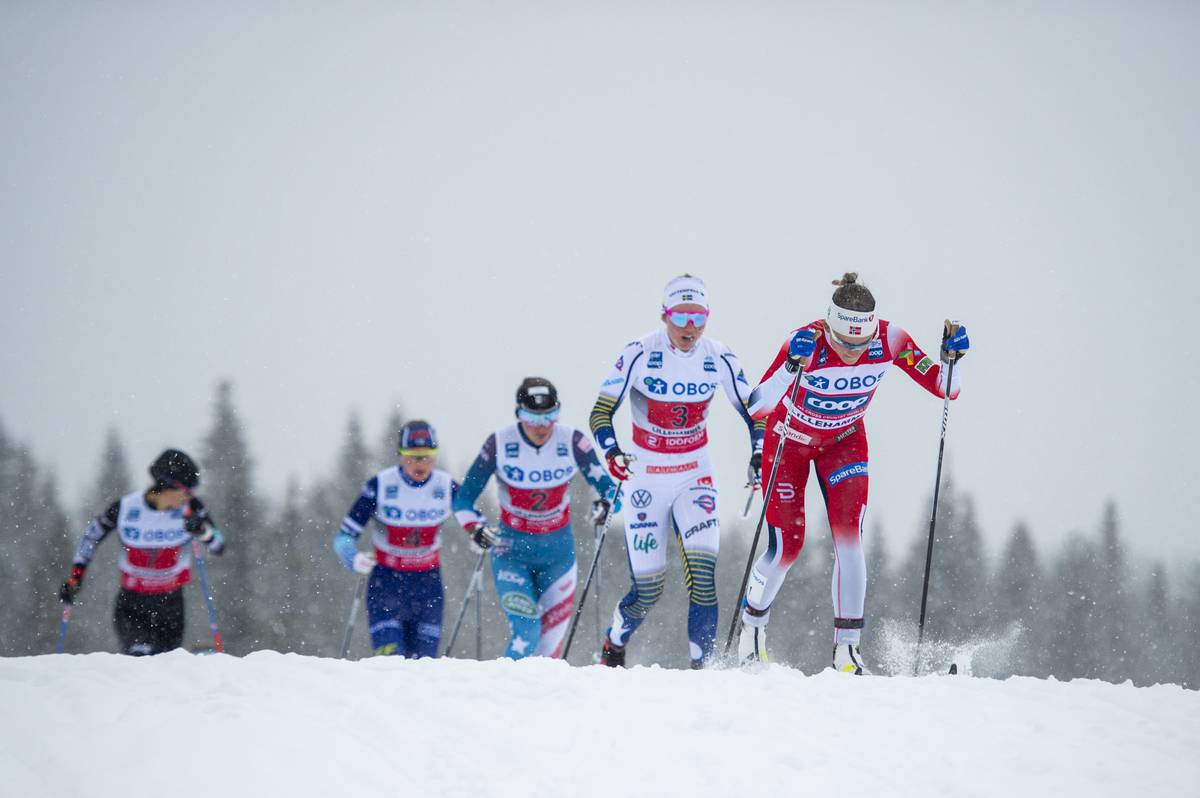 Norway’s sprint champion Maiken Caspersen Falla kicked off for the home team, asking her competitors to keep pace or be left behind. She explained to FIS after the race that her strategy was to stay out front to avoid accidents in the tough conditions.

After the first 2.5 k lap, there were six teams matching Falla’s effort, but skiers appeared unduly taxed by racing through the deep soft snow. Where yesterday they kicked up the tracks on the grueling hills for which the Lillehammer course is known, today, women spent more time running outside them in the loosely packed powder, burning matches left and right.

By the first exchange, only four remained with Norway: Finland, Sweden, Japan, and Russia I. Despite matching Falla stride for stride and keeping the U.S. in great position through 3.3 k, Caldwell succumbed to fatigue and fell off the lead along with the Russia II team. She tagged off to Maubet Bjornsen in seventh with a 26 second deficit. 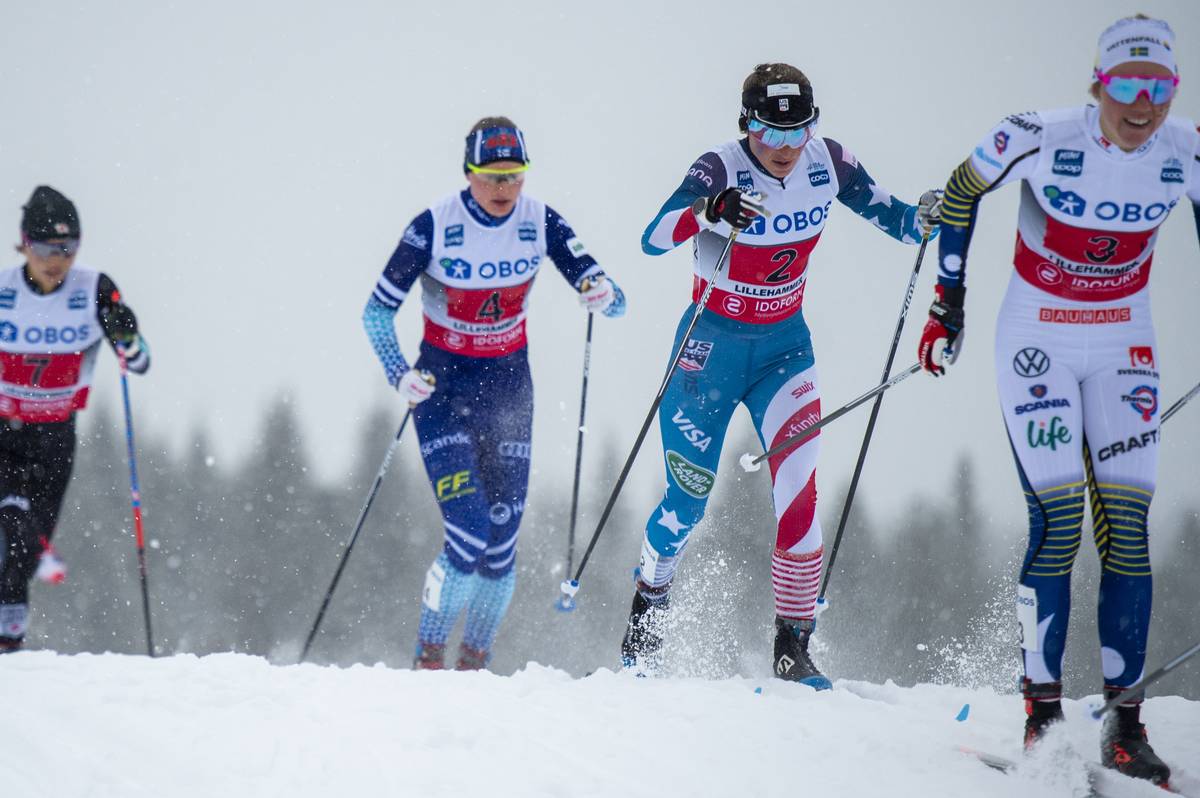 Sophie Caldwell skis with the leaders during the scramble leg of the 4 x 5-kilometer relay in Lillehammer, Norway. (Photo: NordicFocus) 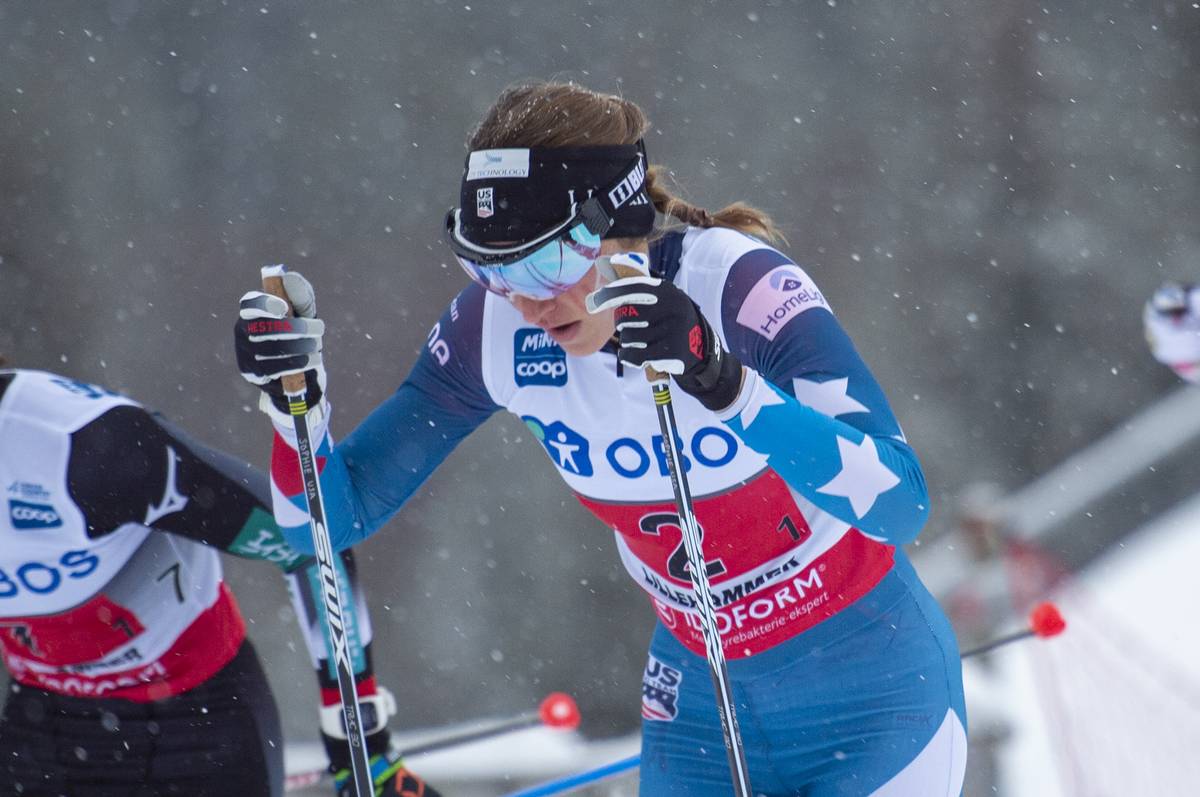 Sophie Caldwell skis with the leaders during the scramble leg of the 4 x 5-kilometer relay in Lillehammer, Norway. (Photo: NordicFocus)

In the second classic leg, Finland’s Kerttu Niskanen challenged Astrid Jacobsen of Norway for the lead, with Sweden and Russia on their tails. Niskanen overtook the Norwegian after the first lap, Jacobsen unable to keep pace.

“I was struggling really hard, but it was a good fight,” Jabosen told FIS after the finish. 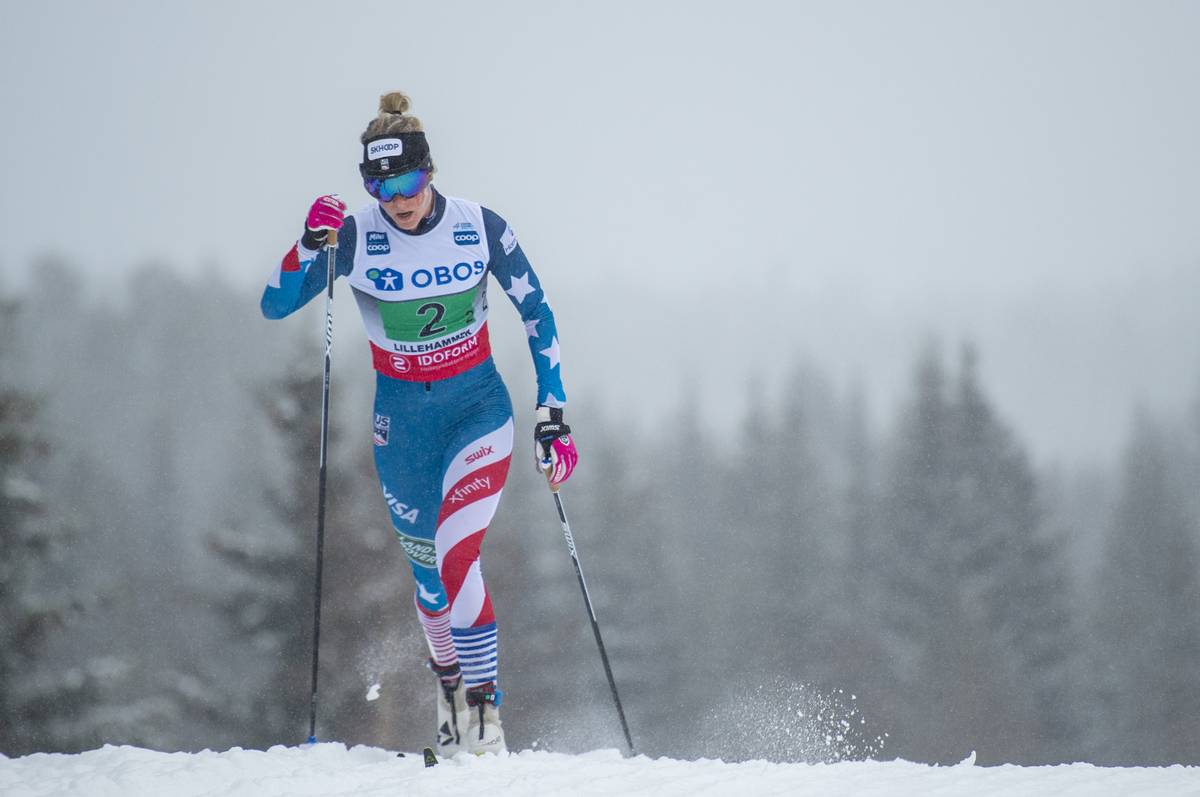 “Come on buddy! You’ve got this, Sadie! Keep your eyes on ‘em, Sadie!” Whitcomb cheered as she closed the gap to Sweden.

By the second exchange, Niskanen had begun breaking apart the field, leaving Jacobsen and Natalia Nepraeva of Russia trailing seven seconds behind. After an equivalent gap, Sweden tagged their first skater, with the Maubet Bjornsen holding strong in fifth 13 seconds behind.

Norway has won the last eleven World Cup relays and was not ready to go down without a fight, particularly in their home country. They deployed their ace in the hole, Therese Johaug, who exploded off the front. She rapidly took back the lead and didn’t look back, creating a cushion of nearly 50 seconds within 5 k. 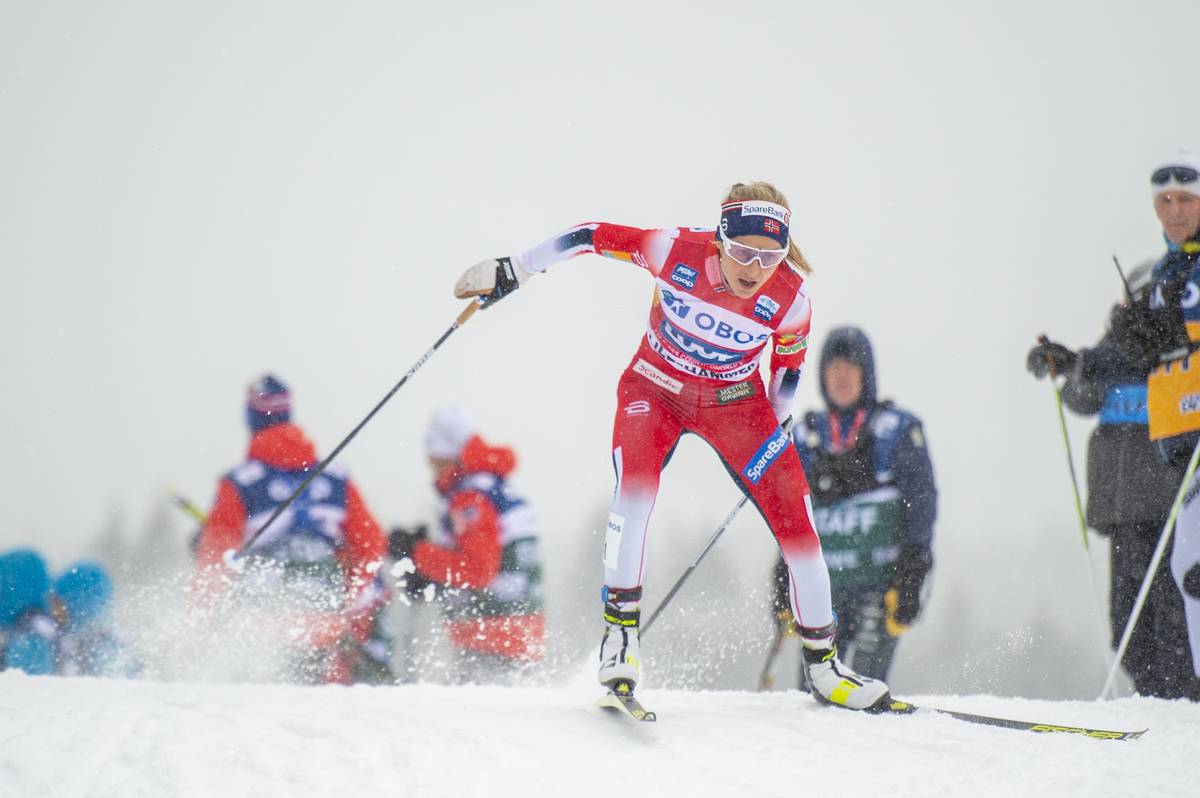 Therese Johaug surges to create a comfortable lead for Norway during the third leg of the 4 x 5-kilometer relay in Lillehammer. (Photo: NordicFocus) 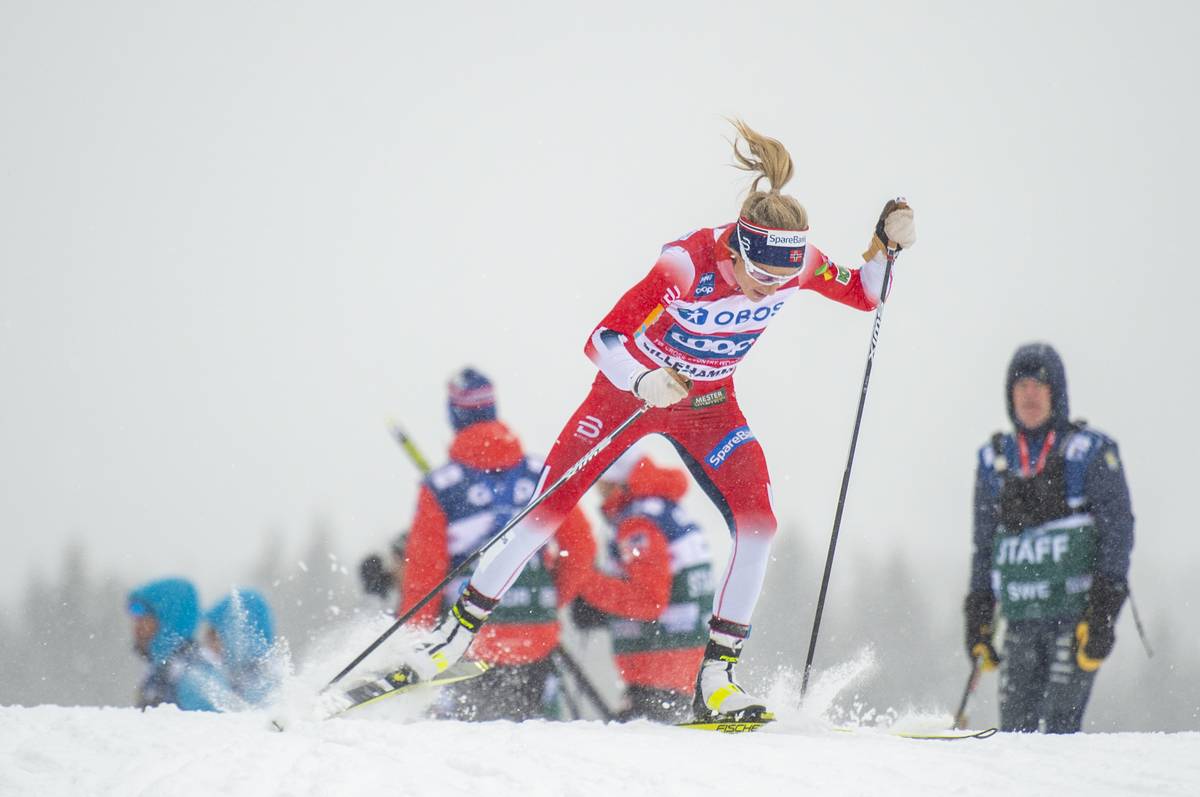 Therese Johaug surges to create a comfortable lead for Norway during the third leg of the 4 x 5-kilometer relay in Lillehammer. (Photo: NordicFocus)

Skating for the U.S.on the third leg, Rosie Brennan maintained Maubet Bjornsen’s progress through the field, quickly overtaking Russia 1 and gaining on Finland. She spent over a kilometer simply grinding on her own, leaving nothing behind to advance her team. She made contact with the Finns by the 3.3 k checkmark and accelerated to leave them behind.

“Relay’s are so fun and also stressful because you never know what’s going to happen until it’s over so it requires everyone to give their best no matter what place or what is happening around you,” Brennan wrote in an email to several news outlets. “Sadie tagged me off in a place where I could visually see teams in front which was exactly what I needed to get a solid chase going on. I love the grind of slow days so I just started to grind away and realized quickly that I was gaining time so I just kept the grind going.”

Brennan tagged off to the anchor, Diggins, in third place just nine seconds behind Sweden.

“I was working hard to catch Sweden and couldn’t quite get there but at least tagged off to Jessie with them in sight and she’s not someone you want to race against on relay day so I had full faith in her ability to reel them in,” Brennan explained. “The Lillehammer relay was my first podium back in 2015 so it felt good to not only be back, but to upgrade by one. I am super happy with my leg and really happy for all the girls work out there today. “

With Johaug’s sizable gap, Heidi Weng hammered through the course without looking back for pursuers. She stopped the clock at 1:02:22.4 for Norway’s 12th consecutive World Cup win. The team has not been beaten since February, 2011 when the Italians were victorious in Rybinsk, Russia.

With Sweden in her sights, Diggins accepted the challenge of working the U.S. into second. By the halfway mark, she closed the gap to the youngest member of the Swedish team, Moa Lundgren. Diggins launched a high tempo attack on each hill, pulling away from the fading Swede. The American charged relentlessly through her final lap, crossing the line with a 20 second gap over Sweden. U.S.A. finished 48.9 seconds behind Norway. 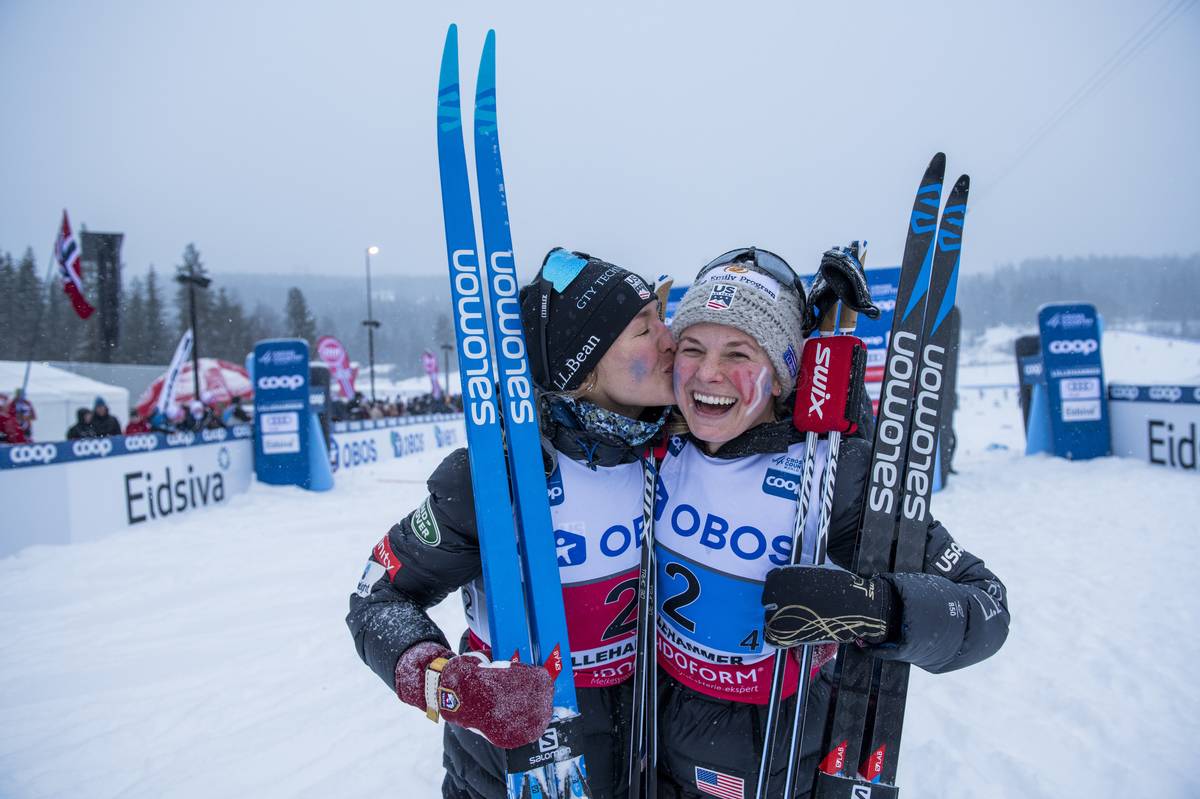 The scrambler and the anchor of the 4 x 5-kilometer relay in Lillehammer, Norway. USA finished second. (Photo: NordicFocus)

FasterSkier spoke with Matt Whitcomb following the race to discuss the selection process, the team’s performance, and the team’s early standout performances. For the U.S., the puzzle is not so complex that podiums are an impossibility. Whitcomb noted that placing athletes in high-stress situations in a scramble leg, despite the possibility of losing contact with the leaders, is simply a risk inherent to sport.

Post-race interview with Matt Whitcomb on the selection process. 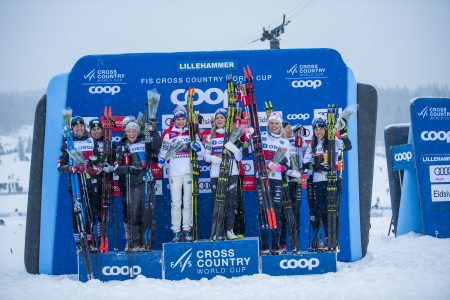 The women’s podium of the 4 x 5-kilometer relay in Lillehammer, Norway. The home country took the win with the United States in second and Sweden in third. (Photo: NordicFocus)

Whitcomb explained the role that depth plays in an overall relay performance and the top three splits of the second through fourth American skiers.

Post-race interview with Matt Whitcomb on the overall relay performance. 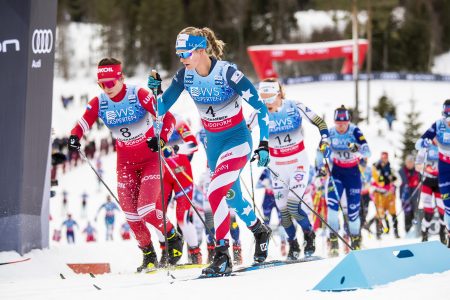 Jessie Diggins leads the chase pack on her way to a second place finish in the 7.5/7.5-kilometer skiathlon in Lillehammer, Norway. (Photo: NordicFocus)

Whitcomb reflects on Diggins’ performances in Lillehammer, contrasting it to the previous year. He comments on the season training and performance plan, and the positive energy that the outstanding women’s performances has given the team.