This post will be updated throughout the day with additional information.

The last time Erik Bjornsen (APU/USST) raced at mid-season U.S. Nationals, it was January 2014. Competing at Soldier Hollow in a series of races designed to choose the American team for the 2014 Winter Olympics in Sochi, Bjornsen captured his last mid-season national title when he won the 15-kilometer classic interval start race. He was followed by Reese Hanneman, Kris Freeman, and Sylvan Ellefson, all of whom have since retired. 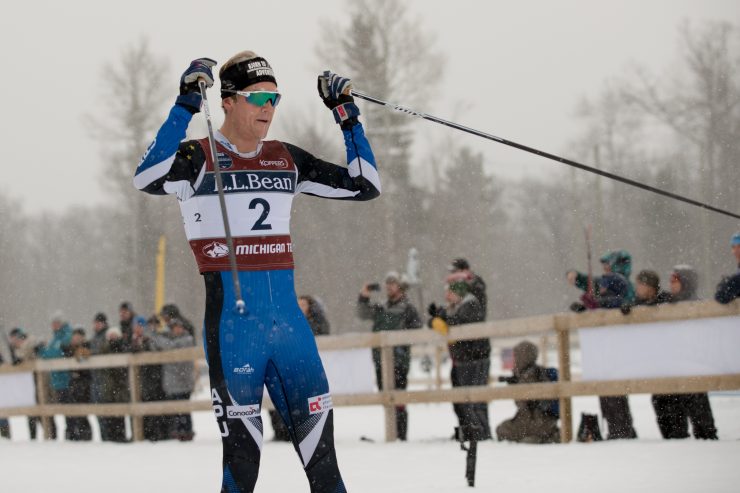 Erik Bjornsen for the win in the men’s 30-kilometer classic. (Photo: Reese Brown)

Six years later, Bjornsen found himself on the top step of the podium again on Sunday morning. Racing the 30 k classic mass start at the 2020 Cross-Country Skiing National Championships in Houghton, Mich., he pulled away from a group of pursuers over the fourth of four 7.5 k laps to take the win in 1:19:34.0.

Bjornsen was followed by Kyle Bratrud (+3.5) and Ian Torchia (+17.0), both of whom ski for SMST2. It was the second podium of the week for all three, after Bratrud won Friday’s 15 k skate and Bjornsen and Torchia tied for third. 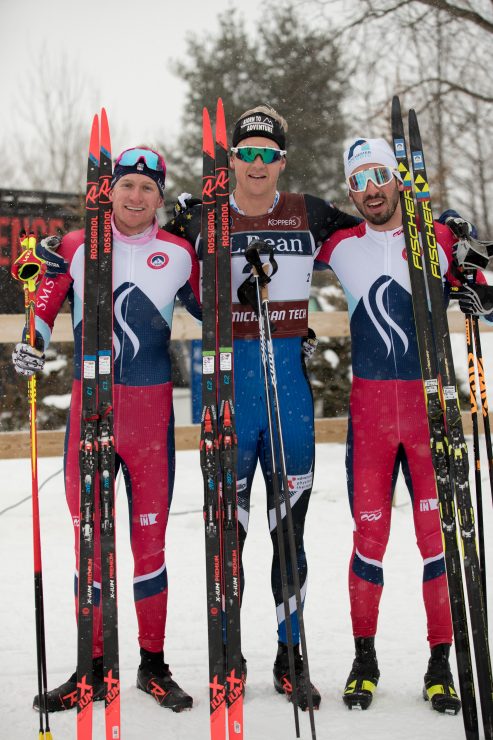 Torchia spent time leading the race and felt comfortable there. He explains that he made a move with 3 k to go, finishing by duking it out with his teammate and training partner in the final push.

Through three laps of the course, there were still 13 athletes within 10 seconds of the lead when the pack came through the stadium at 22.5 k. Everyone who eventually finished in the top 10 came from this group. 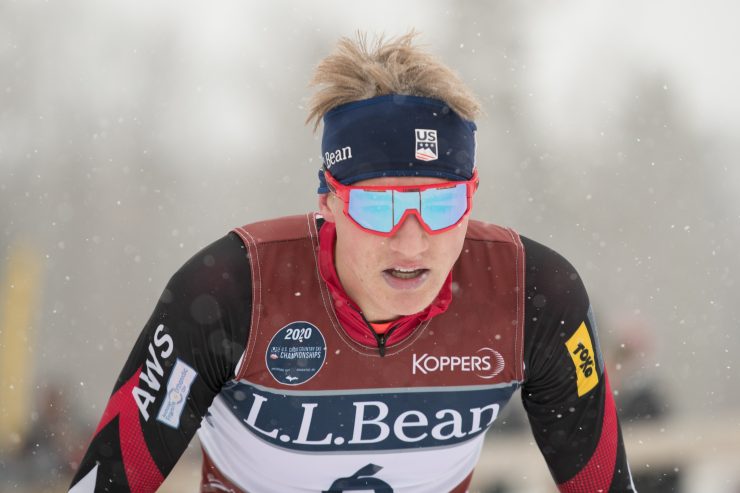 Fourth overall at the finish was Gus Schumacher (Alaska Winter Stars/USST), who was 4.2 seconds out of third and missed the podium for the first time this week. Fifth was Adam Martin (Craftsbury Green Racing Project, or CGRP), sixth was Ben Lustgarten (CGRP), seventh was Tyler Kornfield (APU), eighth was Norwegian Kjetil Baanerud (NMU), ninth was Canadian Philippe Boucher (CNEPH), and tenth was Canadian Ricardo Izquierdo-Bernier (Fondeurs-Laurentides). Tenth place was 43.9 seconds back of the win, and 26.9 seconds off the podium.

In the race-within-a-race for top age-group finishes (relevant for selection for upcoming international competitions), Schumacher and Johnny Hagenbuch (SVSEF), both of whom have already pre-qualified for World Juniors, were the only two U20 athletes to compete in the senior race. The top five U23 American skiers were, in order, Finn O’Connell (UVM), Peter Wolter (Middlebury), Reid Goble (Michigan Tech), Hunter Wonders (APU), and Logan Diekmann (Utah). 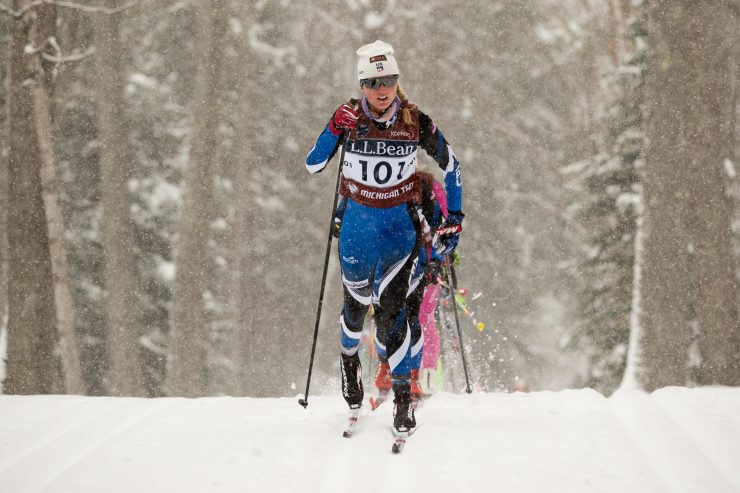 Hailey Swirbul charges for the win in the 20-kilometer classic. (Photo: Reese Brown)

The last time Hailey Swirbul (APU/USST) won a national championship in January, it was Thursday morning. The 21-year-old continued her string of strong performances at this year’s championships when she distanced herself from Caitlin Patterson (CGRP/USST) and Riitta-Liisa Roponen (Finland’s Oulon Hiihtoseura club team) to cross the line in 1:04:06.7 to take her second victory, and third podium finish, of the week.

Swirbul explained that leading suited many of her strengths, allowing her to lengthen her stride and race her own race.

Patterson was 1.0 seconds back, and Roponen 1.7 seconds back, after the three skied together in a five-women pack for much of the second half of the race. 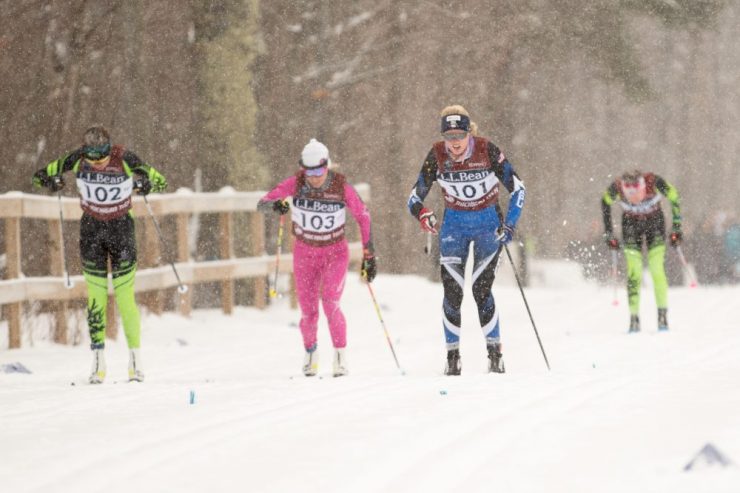 Roponen explained that her only plan heading into the race was to ski with good technique, as she is less comfortable in the classic technique. She explains that she struggled in the downhill, but was “very, very, very” happy with her fight for the finish. 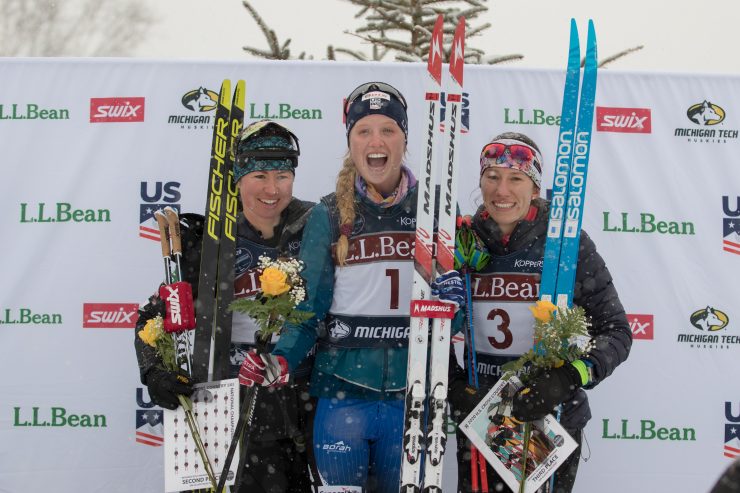 The rest of the top 10 went to Alayna Sonnesyn (SMST2) in sixth, Becca Rorabaugh (APU) (who improved substantially on Friday’s 80th place finish in the 15 k skate as she began to recover from illness) in seventh, Erika Flowers (Bridger Ski Foundation) in eighth, Canadian Cendrine Browne (CNEPH) in ninth, and Emma Tarbath (Montana State) in tenth. The time gaps were substantially larger in the women’s race than in the men’s race, as Tarbath, in tenth, was 2:25 back from Swirbul.

Turning to internal age-group competition, Swirbul, who has pre-qualified for U23 World Championships, was the top U23 skier on Sunday. The next four U23 women were Tarbath, Annika Landis (Middlebury), Mariah Bredal (Utah), and Alex Lawson (Middlebury).

The podium for the junior boys 10 k classic mass start race (two laps of the 5 k course) had an Alaskan theme on Sunday: Luke Jager (Utah/USST), who grew up in Anchorage and skied with APU for the last ten years before going to college, took the win in 29:39.7; JC Schoonmaker (University of Alaska Anchorage) was second, 5.1 seconds back; and Zanden McMullen (APU) was third, just behind at 5.5 seconds back.

The junior girls take to the course for the 7.5-kilometer classic. (Photo: Reese Brown)

The podium for the junior girls 7.5 k classic mass start (one lap of the 7.5 k course) featured two familiar names from American junior racing, and one relative unknown. First was Sydney Palmer-Leger (SVSEF), who was on the fourth-place American relay team at 2019 World Juniors and who took home a pair of overall podium finishes at the Sun Valley SuperTour stop last month. Third was Kendall Kramer (Nordic Ski Club of Fairbanks), who was fourth at World Juniors in the distance classic last year and who will be representing the U.S. at the 2020 Youth Olympic Games in Lausanne, Switzerland, starting next week.

And second was Sophia Laukli (Middlebury), who has posted strong results domestically at Junior Nationals but does not appear to have been previously selected for a World Juniors team. She was 20th (among finishers with an active FIS license) in the classic mass start at 2018 nationals, and 14th in the skate mass start at 2019 nationals. (She was second in the 20 k mass start at 2019 Spring Series, first American, but that was in a field of only six FIS finishers.)