The Marcialonga course follows the rivers in Italy’s Fiemme and Fassa valleys for the first 67 kilometres. (Photo: Ian Murray)

Double poling is an increasingly important part of cross-country skiing and it pays to be good at it. If watching World Cup stars double pole short races on television doesn’t have you convinced, take a look at the races you might enter. Most loppets, marathons and citizen races feature flatter courses with a lot of double-poling time. Even in skating, the three main techniques all include slight variations on double poling.

When five Canmore skiers decided to make the 70-kilometer Marcialonga in Italy (part of the Ski Classics marathon series) their major target for this season, they decided to emphasize one technique in their preparation.

“Pretty much the whole elite field will [double pole the Marcialonga without grip wax],” Erik Carleton, a longtime Canadian Para-Nordic Ski Team guide, explained. “It’s all about getting to the last uphill, and then it’s 3 k pretty steep and you just try and survive that.”

Here are three of the workouts that the 38-year-old Carleton and his Canmore-based training partners, including Canadian Para-Nordic veteran Brian McKeever (age 37), his other guide Graham Nishikawa (33), Ian Murray of North Highlands Nordic (38), and Jon Arne Enevoldsen (54), a former Norwegian biathlete who now runs a coaching business, used to prepare. Each of these five athletes had a different mix of goals for the season and shared workouts were just a part of their individual preparation. FasterSkier has suggested variations for those of us who are less than elite.

The Canmore crew chose the Reino Keski-Salmi loppet, a 34 k race at the Larch Hills trails in Salmon Arm, B.C., known to locals as the RKS. This event is a typical regional loppet: the long course is relatively flat with a little over 600 metres of climbing, the demographic is dominated by kids and retired people, and most of the 396 finishers were solidly focussed on having fun on snow.

Before the race, Enevoldsen correctly predicted that local skiers with grip wax would easily beat anyone double poling on squeaky -17 Celsius snow. Their goal was not to win, but to get some quality DP training done two weeks before the Marcialonga.

Carleton was feeling the effects of his 15th at Soldier Hollow, finishing the RKS 4:03 minutes behind Hardy. Carleton said afterwards, “It felt good off the start and I tried to push the pace a bit, but then the body was — not today.”

Murray and Enevoldsen were fresher but still treated the RKS as a training workout, finishing at 1:32 and 9:00 respectively to win their age groups.

If it seems wrong to go to a race and not push for the best possible finish, these guys weren’t alone in looking past the result sheet. Retired Canadian national-team member Alysson Marshall returned to her hometown event with her new husband Chris Hamilton to have fun on the trails she grew up on.

Roughly every two weeks, the crew would get together for a long Zone 1 (Level 1, or easy chat level) double-pole ski followed immediately by 30 to 60 minutes in Zone 3 (loppet race pace).

“The idea is you tire out your body and then try and push it a bit more,” Carleton said, “so that it will give you that endurance double-poling at the end of loppet races.”

For this crew, the long easy session was two to four hours.

While this workout could be done on snow, it was a rollerski favourite because of available trails. “We’ve got this nice legacy trail to Banff and it’s good flat terrain for that,” Carleton said. Few ski areas can provide flat trails suitable for a four hour ski without excessive laps.

Double pole 45 minutes in Zone 3, followed by four hours of rest between.

Murray came up with this workout after getting good performance gains from doing mountain bike relay races like ’24 Hours of Adrenaline Canmore’ and ‘Golden 24’.

“Some of my friends give me a hard time, saying this is too difficult,” Murray wrote in an email. “But the mountain bike races are far harder.”

So how did these five fare in the Marcialonga after all the preparation?

Murray was pleased with his personal best at a Ski Classics event, writing “The double pole training has worked out well. I was able to hold a hard effort for the first 50km although I faded a bit in the last 7km.”

Murray’s event highlight: “Being so close to the lead for the first part of the race.  Also skiing down the streets of 4 old Italian towns along the 57km track.  I didn’t get to soak in that aspect of the race during the event but rather in the pre-skis and post race ski it was fantastic.”

And how much did the double-pole preparation pay off? Considering there were 5761 finishers including many former world cup stars like Gjerdalen, Anders Aukland, Toni Livers, and Østein Pettersen, top 200 is impressive.

Graham Nishikawa takes a feed. Note that bib 52 in the background is striding! (Photo: Graham Longford)

Nishikawa entering the stadium in Tesero. If the background looks familiar this is the Val di Fiemme venue used in the Tour de Ski every year. (Photo: Graham Longford)

While the attention is on the elite skiers, thousands of people are enjoying the scenery and temporary ski tracks through the many towns on route. (Photo: Graham Longford) 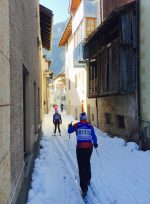 Alleys and byways can be ski trails too. (Photo: Graham Longford) 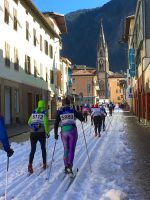 ‘Passeggiata’ is the evening stroll through ‘la citta’, the centre of town. Many of the skiers at the back of the group will stop in a cafe for a drink and a pastry in one of the small towns. (Photo: Graham Longford)