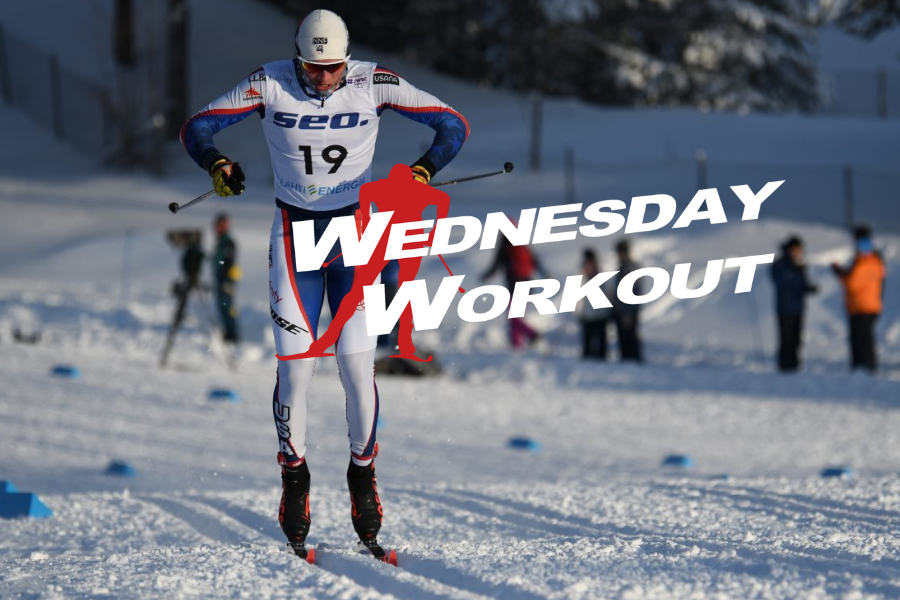 At eighteen-years-old, Gus Schumacher remains composed in what is a pressure cooker of endurance sport. There he was last week on his home tracks of Kincaid Park in Anchorage, AK., claiming four first place medals and providing locals a deep-well of pride. If in fact this young man is stressed before or during a race, it’d be hard to notice. And maybe part of that demeanor has to do with his preparedness. Schumacher is prepared.

FasterSkier spoke to Schumacher on Tuesday, a day after he arrived in Québec City for his first career World Cup. The races begin Friday with a skate sprint.

This Wednesday Workout is less a specific workout idea, and more a look at how one athlete is approaching their initial exposure to the sport’s big-tent-circus. Rather than stress about the possible unknowns he’ll begin experiencing on Friday, Schumacher has attempted to make pre-World Cup life this week as normal as possible.

On changing time Zones (four to be precise as Schumacher flew from Anchorage to Québec).

For me it is really easy because often times travel takes a lot out of me. We traveled over night so I didn’t sleep that well on the plane. So when I got here, I went on a little run and did some light core to feel like I was not in travel mode anymore. I went to sleep and slept for eleven hours and woke up Tuesday morning feeling really good.

Jan [Buron], my primary coach is with me mostly because I needed my own tech. But it is cool for him to be able to come too. To have an athlete under him doing a World Cup race. For me anyway, that is how it is going. Obviously, all the coaches are helping the team but he is my main coach and tech. It will be make it simple. He knows my skis pretty well. I am used to how he waxes and stuff like that.

On maintaining race fitness (coming into World Cup finals) not in Europe but at home in Alaska.

I hadn’t race a whole lot since the mid-season. I had done a fair amount of training. Those races at Junior Nationals were actually perfect for me to get back into my primed racing shape. So I thought it was helpful to go really hard in all of those and get that super high effort – the ability to push really hard again. If you just train for a while, you sort of lose that. Those races were perfect to go hard in. They set me up really nicely.

On maintaining the engine this week.

Tuesday: Tuesday morning I did an easy ski to get an understanding of the course. And I will do afternoon jogs, just for some activity.

Wednesday: I think I am going to do some intervals, sort of race prep tomorrow.

Thursday: I’ll take it easier Thursday, maybe some speeds on the sprint course to again get an idea of how things will flow.

On staying calm and maintaining perspective.

Mentally it is easier to race if you have less expectations. As a junior I always liked it when they paired U12 and U14. I could race as fast as I could, If I did badly it was against U14s…and if I did well, I beat the U14s. I don’t know, I am still visualizing and thinking about how I am going to race so I can race my best. It is a little easier than when you think, like World Juniors that is your shot to really do it. You have to have a good results at some point. You can tell yourself you do not need to do that well, there are other races. You really do want to do your best and that is for sure harder. And it still helps to visualize and think about what you are going to do on the day instead of exactly how you are going to warm up, instead of thinking exactly about your results goals.

On choosing to accept his World Cup start.

When I talked to Jan, he thought I should do it no matter what I guess. But I definitely talked to Gus Kaeding a little bit, we have been pretty careful about the approach to these types of races and there was a possibility for some other starts earlier in the season, European starts earlier in the year. But, I think I am trying to tread lightly to the approach to this. The biggest deal is not putting too much pressure on myself here.

There are always doubts a little bit. There are fast kids in Norway that don’t start. That is how Norway does it. It is hard to say exactly it is hard in the U.S. because we don’t have a large experience with it. There is not the same volume of high quality skiers that come through like Norway. But, I think, not putting too much pressure on yourself. You have got to start at some point and If I get beaten badly, I think that is probably the biggest downside of doing it maybe. Is being discouraged from that. I don’t know. I am not super worried about it, racing at my level has gone fairly well, I know the people that are at my level are not so far ahead of me.

I don’t know, if I do poorly here, I don’t think it matters too much.