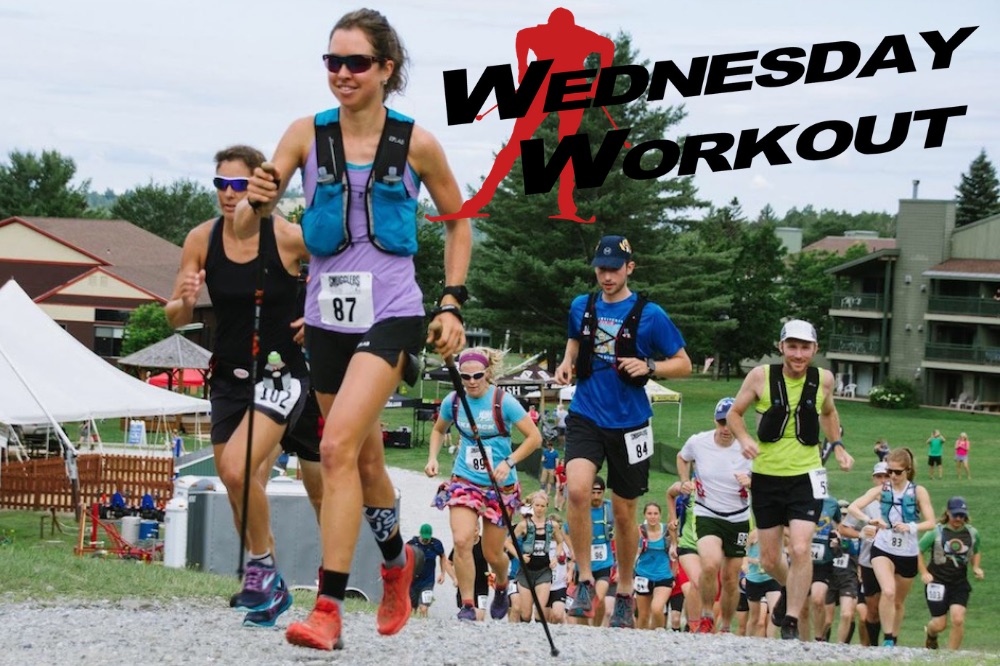 This week’s workout comes from Caitlin Patterson, a Craftsbury Green Racing Project (CGRP) skier and 2018 Winter Olympian. We asked the 28-year-old Patterson, an accomplished mountain runner as well, about training and racing with poles while hiking or running. When and what type of terrain does she typically use them for, and what kind of workout would she recommend with poles?

It may come as no surprise that many of Caitlin Patterson’s dryland workouts incorporate poles. Even with a nomination to the 2017 USA Track and Field Mountain Running World Championships Team, Patterson’s mentality remains, “I am skier and I train to be a skier.”

With skiing as her primary sport (she competed at the 2018 Winter Olympics in South Korea), Patterson has also found herself as a top contender in domestic mountain running races. 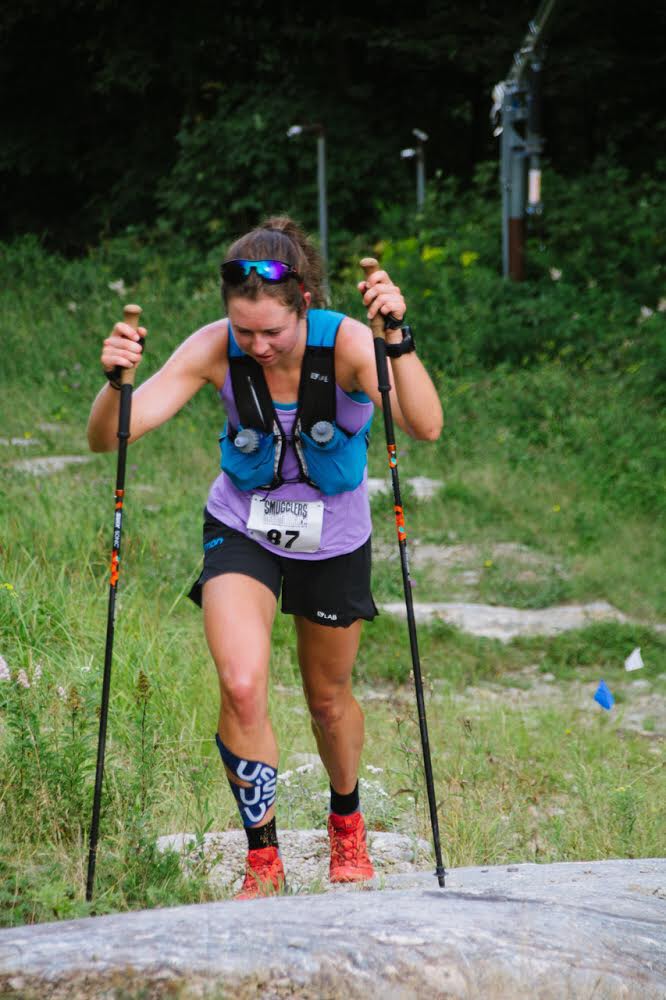 Born in McCall, Idaho, and later raised in Anchorage, Alaska, Patterson acknowledges that much of her success in both mountain running and skiing stems from knowing when and how to put her poles to good use. (In both Broken Arrow Skyraces, she was permitted and opted to use poles.)

When to put poles to use?

The straightforward answer to this question is on the ups. During distance workouts, Patterson rarely takes the time to pole plant while descending downhill. Her reason is that doing so may actually inhibit her turnover, slowing the pace and her momentum.

“I find that when you try to pole on a downhill, you often brake or brace more,” she explained. “So I put them away or hold them in my hands on a downhill.”

Once she reaches a climb, regardless of grade, she puts her poles and arms to work.

“From the most gradual uphill to the steeper uphill for a distance workout, I’ll use them,” she said.

When it comes to intervals on foot, Patterson almost always usespoles. Much of this is due to the training philosophy of her coach at Craftsbury, Pepa Miloucheva.

“In all my years here on the team, I haven’t ever done just pure running intervals,” said Patterson, now in her sixth year with CGRP. “That’s sort of more related to Pepa. She just doesn’t really care for them. She really cares more for running with poles or rollerski intervals.”

Beyond the type of workout (distance or interval), Patterson also looks at the workout’s expected elevation gain and terrain when she decides whether or not to use poles.

A workout with “sustained climbs”, such as a long run to the top of a mountain peak, warrants using poles for Patterson. She added that it “also depends on the footing or the microscale of the terrain/type of trail that you’re on.”

Trails with large, chunky rocks may not be conducive to proper pole planting. The same goes for terrain with surfaces that make poling more work and climbing less efficient. Patterson explained that her younger brother, Scott Patterson, a member of the U.S. Ski Team, has yet to use poles in a mountain running race.

“I was trying really hard to convince Scott to use [poles] for the Rut, a [mountain running] race in Montana,” she said. “He decided not to use them because, with that race, it is so rocky up high. You can’t plant poles on pure slabs of rock.”

So what’s the most optimal poling workout? Long-distance or interval? Technique-oriented or threshold? 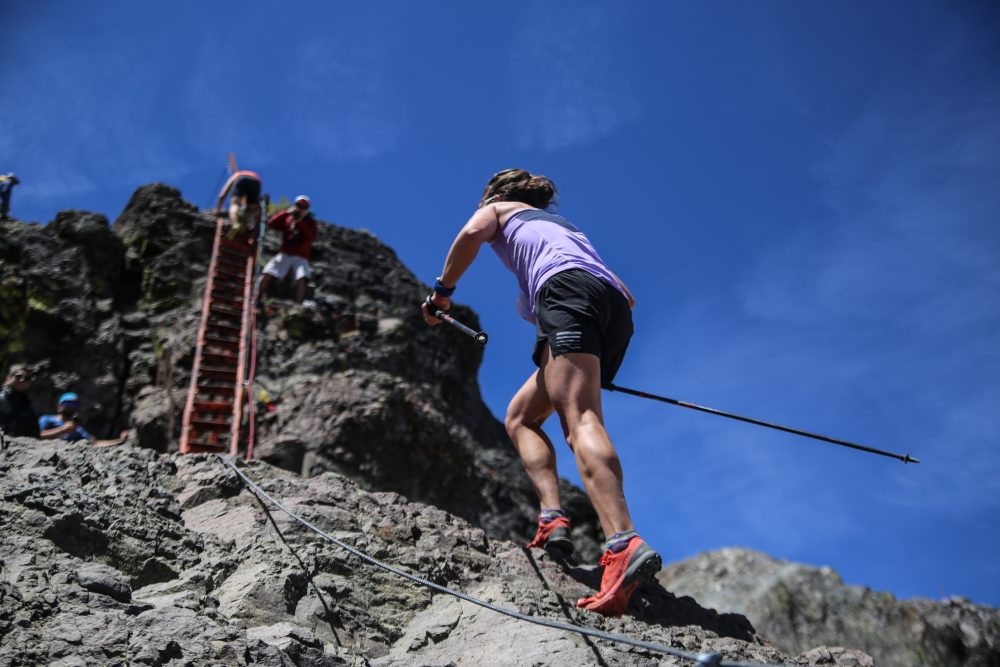 Incorporating poles into workouts can come in a multitude of varieties, but Patterson’s favorite comes in the form of racing.

“What I would recommend is to go find a local mountain race, double check that you can use poles for it, and race,” she said.

She recommended a race distance between 10 to 25 k with plenty of elevation gain.

One of the biggest reasons she favors poles in mountain running races is for experimental purposes. Races offer the opportunity to test how using poles might give an advantage over not using poles.

“In these races I’ve done in the past few years, when I was able to use my poles, particularly as a woman racing with the men, I’ll be like, ‘OK, I’m running along on the flats and darn that guy is running faster than me, so I pick up my poles and I just run along and then I’m keeping up,” Patterson explained. “Then I get to a steep spot and I’m like, ‘Huh, I think I’ll start using my poles now,’ and once I use them, I pass the guy next to me or something.’”

Mountain running races don’t always find Patterson with poles in hand. Using poles on gradual terrain may end up slowing down one’s tempo, she explained, causing the racing to slow down.

“I’ve found that poles are most useful when you can use them on really steep stuff to save your legs,” she said.

“No matter what you’re doing with the poles, keep your core strong and your arms strong,” Patterson said of her number-one recommendation for skiers looking to do the workout.

“I’m thinking more about more overall body efficiency than skiing technique,” she continued. “No matter what technique you do you should always keep your core strong and keep your arms strong and going parallel with your motion.” 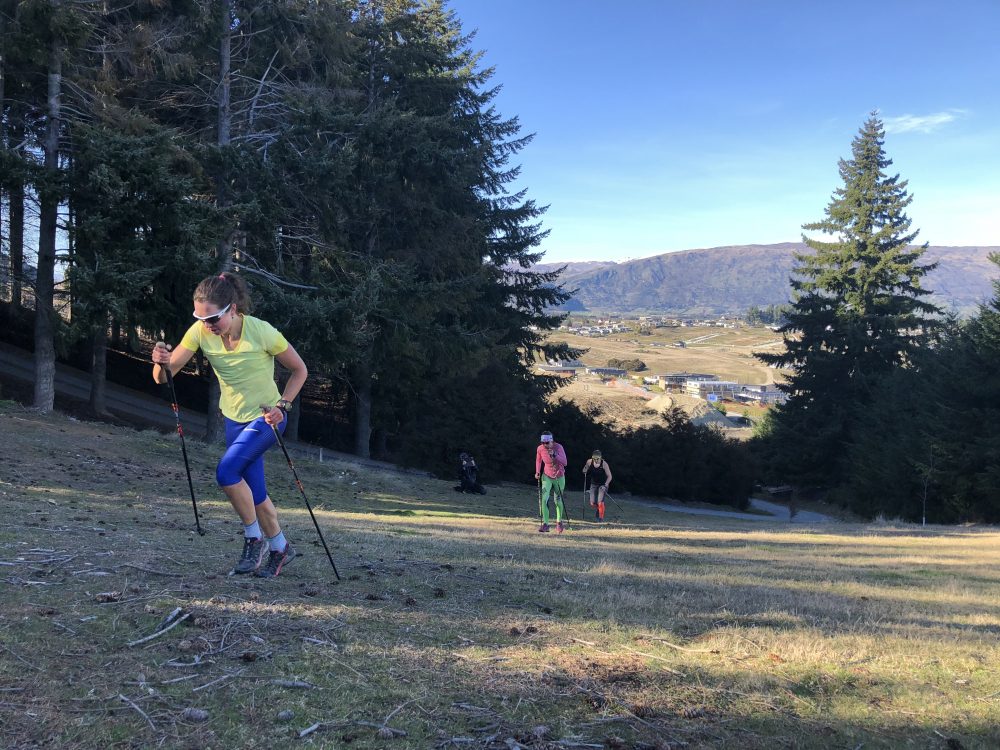