Sunday, for the men’s 4 x 7.5-kilometer relay in Lahti, Finland the scene was decidedly more fitting for winter sport: The race began amidst falling snow despite bare firs and hardwoods lining the course. It’s been a sparse winter in Lahti. 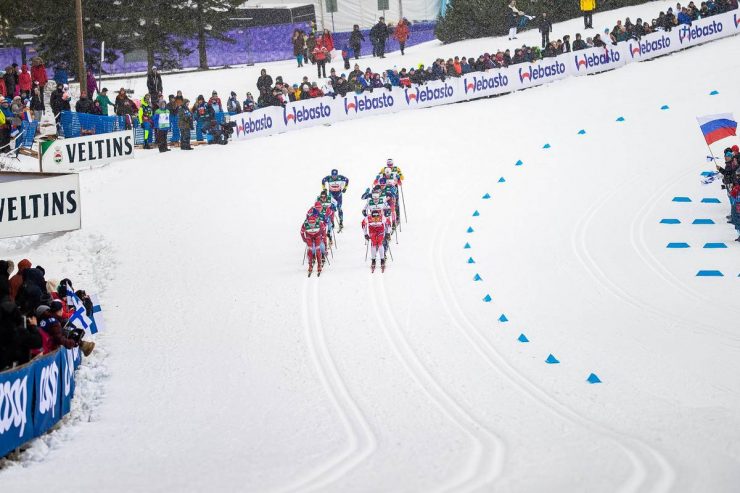 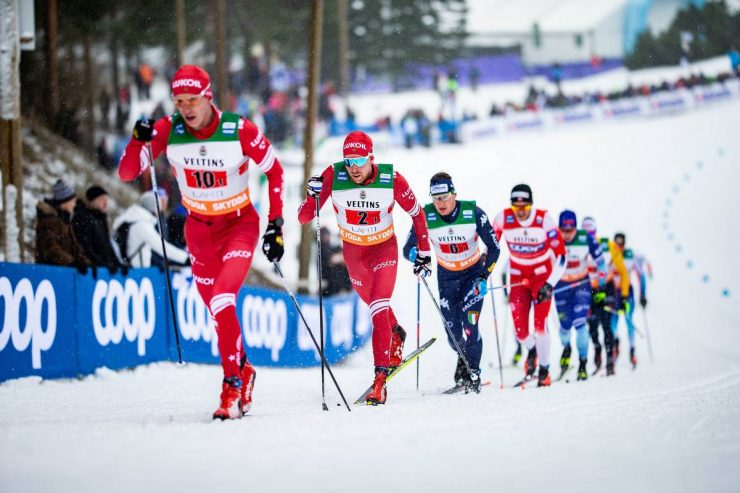 For the first 7.5 k leg, Russia I’s Ilia Semikov and Russia II’s Andrey Sobakarev animated the sharp end with several pulses of energy to make a slinky of the pack. Norway’s Pål Golberg took some commensurate pulls too. The calories expended broke this into a front group of six teams at the first exchange separated by 2.4 seconds. The teams came through in this order: Norway, Russia I, Germany, Finland, Russia II, and Italy. Switzerland and Sweden, who had been loosely attached to the pack here and there, had popped – coming through roughly 20 seconds back. 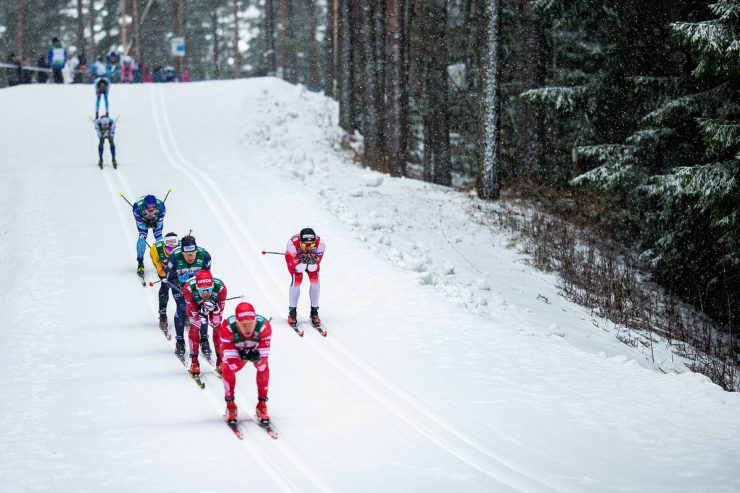 The second leg played out much like the first, with the Russian teams, Norway, Italy, and Finland maintaining a gap. Finland’s Iivo Niskanen kept Finland in the hunt, and Russia II’s Alexey Chervotkin took a runner through the 13.6 k time check – otherwise the drama was subdued. 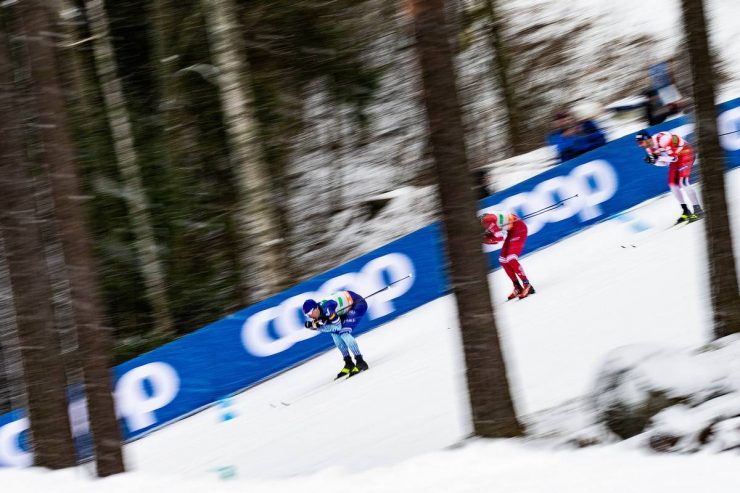 Through the woods, a leading Iivo Niskanen of Finland. (Photo: NordicFocus)

During the first skate leg, the front group ballooned modestly to seven with the addition of Germany beyond the original six teams. As the third leg skate moved towards the tag off for leg four, Finland had popped for good, and coming down into the stadium for the tag, it became a five team affair, with Russia I, Russia II, Germany, Norway, and Italy coming through in that order. Switzerland tagged off in sixth (+6.9). 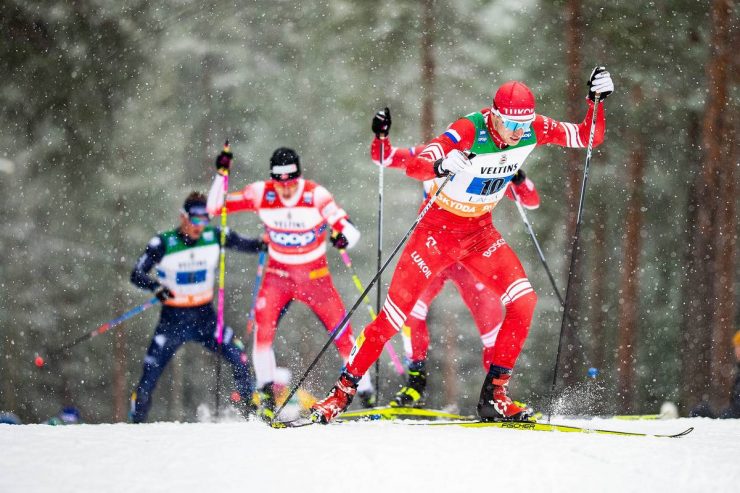 During the fourth leg the Russians gave several hungry digs. But on the first pass through Lahti stadium at 25 k with a long glide out speeding into the lap area, Norway’s anchor, Johannes Høsflot Klæbo, clearly sported the slickest pair of skate skis as he moved to the front with little friction under his feet. And we all know how Klæbo can close.

At 27.5 k, the start of the last lap, Germany was no longer in the podium game. Five teams came through in a line led by the indomanable Klæbo. For the final 2.5 k lap, Klæbo killed the pace initially and then Russia I’s Andrey Melnichenkov tried in earnest to pull away and thin out the latched on Klæbo, Italy’s Stefan Zelger, and Switzerland’s Roman Furger. To no avail. Like he’s done before in countless sprints, Klæbo tapped into his vast stores of fast twitch muscle fiber and pulled away in the home stretch for the Norway win in 1:09: 53. 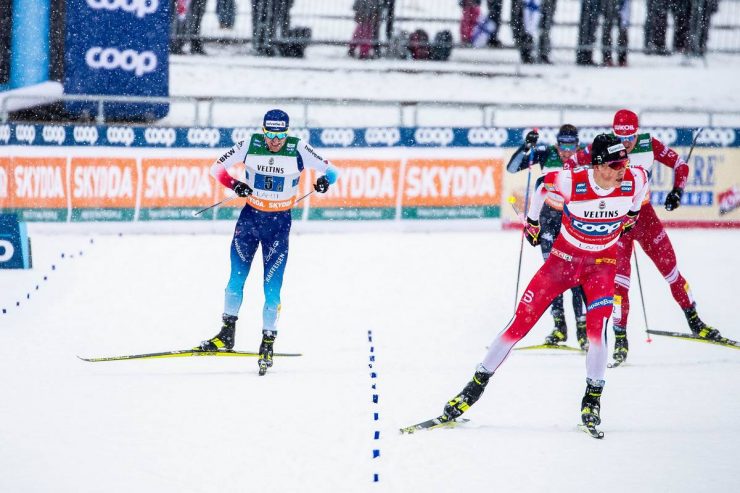 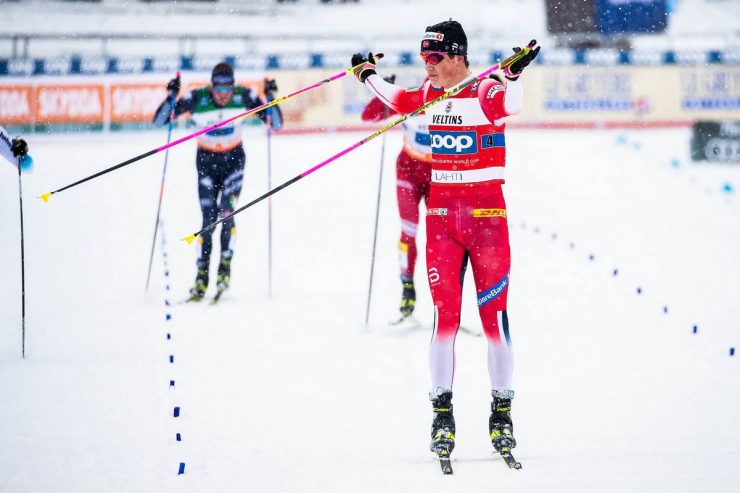 Norway’s combo of Golberg, Hans Christer Holund, Sjur Røthe, and Klæbo momentarily reclaimed the men’s relay title over Russia -the Russians had won the last two relays, one in Lillehammer this season, the other in Ulricehamn, Sweden last year.

For the Swiss, this was thier first men’s World Cup relay podium in nearly a decade.

“Russia has won the previous two relays, it was time to take the throne back,” Golberg told FIS after the race.

Klæbo’s comments to FIS post-race underscored his finish speed gift. “In the start it was quite high speed and I think that all of the other guys saw that it was really difficult to get a gap,” Klæbo said of his leg. “So I was just in the front and slowing the pace down, it was almost just like training, it was a really slow pace. But in the end it was all-in and I think it was a really fun and interesting race.”

Racing continues in Drammen, Norway on Wednesday with a classic sprint. 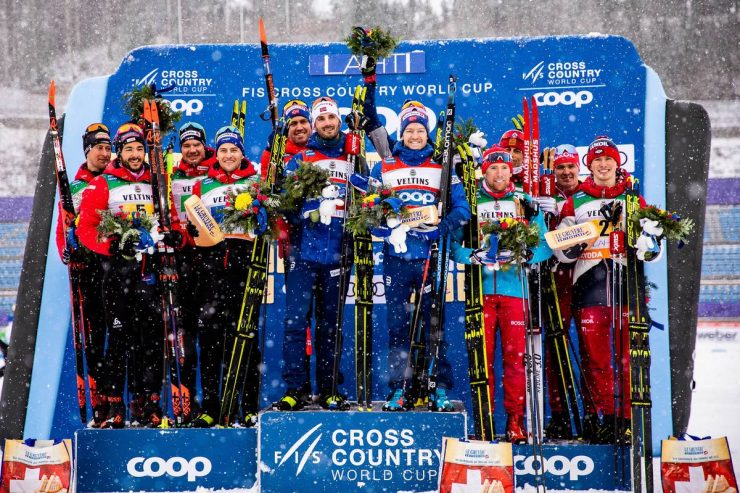