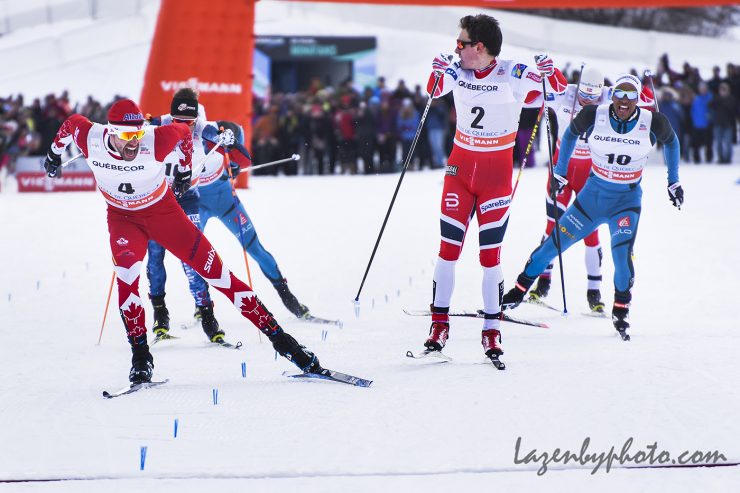 Canada’s Alex Harvey (l) coming on strong in the finishing stretch to outlast Norway’s Finn Hågen Krogh (2) by 0.31 seconds for the win in the World Cup Finals freestyle sprint on Friday in Quebec City, while France’s Richard Jouve (10) races to third, just ahead of American Simi Hamilton (behind Harvey) in fourth. (Photo: John Lazenby/Lazenbyphoto.com)

Welcome to FasterSkier’s World Cup Preview, where we check in with the top-10 teams from last year’s FIS Cross Country World Cup tour before the season starts. The World Cup begins with a classic sprint in Ruka, Finland on Nov. 24th.

Canada has shape-shifted it’s world cup team as part of a larger restructuring of its high performance program. With fewer resources and a funding system tied to championship medals, contraction has been a major theme for Cross Country Canada (CCC).

Let’s begin with Quebec’s bread and butter: Alex Harvey. At thirty-years-old, Harvey remains podium-elite. He scored five podiums last season, including a win in Falun, Sweden’s 15-kilometer pursuit.  Omni-present in the front of the pack, Harvey positioned himself for sustained success in 2017/2018. Like last year, Harvey plans on racing the full World Cup in 2018/2019. After placing third in the Tour de Ski and fourth overall in the World Cup final standings, CCC and fans alike have high expectations for Harvey.

Lenny Valjas and Julien Locke have start rights for the full season, but CCC expects that both will choose to skip some races. Valjas admittedly posted down results last season. But his Olympic form proved top-10 as he placed seventh in PyeongChang’s classic sprint.

Devon Kershaw, Jess Cockney, Knute Johnsgaard, and Graeme Killick all retired at the end of the Olympic cycle.

Many top-ranked Canadians turned up at the Frozen Thunder races. As the races were not used for selection, nearly all of the top athletes treated them as race intensity.

Harvey claims he is excited as the season approaches.

“I’m feeling great right now,” Harvey wrote in an email. “I was able to execute the plan pretty much to the dot this year, no injury or illness slowed me down and I have a fun time the whole Summer and Fall! As per usual, I’m a slow-ish starter so the first goal of the season for me will be the Tour de Ski.

“The big goal for me this season is the World Championship in Seefeld. I’m focusing on the skiathlon and the 50k where I’m going to defend my world title to the best of my abilities! Right behind Worlds are World Cup Finals in Québec City, so that’s a huge motivating factor for me to wrap up the season at home once again just like we did in 2017.”

Valjas also plans on a gradual build up to his form after his rough season last year. “This summer was a tough one,” Valjas wrote after the Frozen Thunder sprints. “My back was in need of some serious rest and recovery, so I took 2.5 months almost completely off. I ran and biked a bit, but no roller skiing. I am expecting the start of my season to be a little slow, but I plan to race myself into top shape once again come World Champs.”

For the athletes who aren’t consistent podium threats on the World Cup, the season outlook is less clear.

CCC has rebooted it’s high performance program. Nic Lemyre came on board in June as a high performance consultant. Erik Bråten was hired on Nov. 1st, as a national team coach, with a focus on U23 and western-based athletes. At the same time, Louis Bouchard was named World Cup team head coach. Bråten is expected to join Bouchard off-and-on in Europe and will otherwise use Canmore as a hub.

CCC CEO Shane Pearsall was feeling optimistic about the season when he spoke to FasterSkier on November 8th.

“I’m thrilled,” he said of a week in which CCC hired a new national team coach, finalized the World Cup head coach role, and finally published a long awaited selection criteria. “I think it’s one of those things where you need fresh blood,” Pearsall said, while acknowledging the short term delays and difficulties inherent in that choice.

A story on CCC’s new direction will be explored in an upcoming article.