Seven men and nine women will be lining up in stars and stripes for the World Cup’s opening: Finland’s Ruka Triple. Three race series features a classic sprint followed by a two-day distance pursuit. 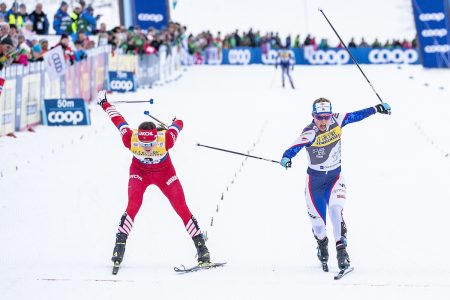 At the top of the ranks, Jessie Diggins (USST/SMS T2) finished the 2019 season 6th in distance and 7th in sprint. It was a year of navigating the life of a gold medalist whose training time was suddenly competing with travel, media attention, and collaborating with sponsors. According to her blog, she packed in 25 events in the first 50 days after the Olympics. Diggins admitted this swell of opportunities also left her feeling mentally and physically fatigued during the season.

That said, you know American women’s skiing has come a long way when feeling flat leads to finishing 6th overall in the World Cup Standings. Diggins won the freestyle sprint in Cogne, Italy and took 3rd in the 10 k skate in Falun, Sweden. She also placed third in three stages of the Tour de Ski and skied the fastest time of day during the 10 k skate pursuit in Oberstdorf, Germany.

Presuming Diggins achieved her goal of finding a work-life balance that allowed her to better recover and absorb training, we can expect her to consistently remain one of the top athletes on the World Cup.

One thing is certain: The Minneapolis World Cup race on March 17th features a freestyle sprint, and Diggins will be racing in front of a home crowd amidst a cacophony of cowbell.

Another consistent performer, Sadie Maubet Bjornsen (USST/APU) finished 8th in the sprint standings and 13th in the distance. She took third in the freestyle sprint in Lillehammer, NOR and cleaned up at the Super Tour Finals winning the freestyle sprint and both distance races. Another testament to how high the standard has been set for the American women, Maubet Bjornsen’s season was not particularly novel, despite consistently measuring up as one of the best all-around skiers in the world. We have come to expect her to perform, and she continues to meet our expectations. This year we expect no less.

Leading the American women on the short track, Sophie Caldwell (USST/SMS T2) finished the season ranked 4th in the overall sprint standings. Caldwell took second place in Davos, Val Muestair, and Lahti, and landed inside the top ten an additional three times. After posting the second fastest qualifying time in the World Championships in Seefeld, AUT, Caldwell was eliminated in the quarterfinals after throwing her boot across the line a three-way photo finish. Because the heat was slow and she was deemed third, she was unable to advance. 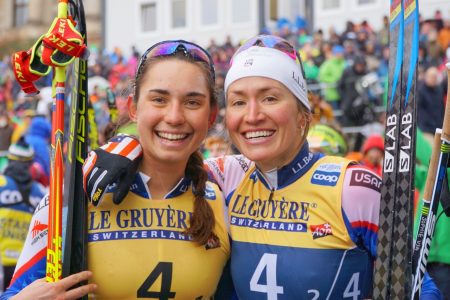 Julia Kern (USST/ earned her first Period 1 starts as the overall SuperTour leader in 2019. The 22-year-old also displayed her readiness to race at the World Cup level by scoring points in five events. Her best individual performance came during the freestyle sprint in Cogne, ITA where she finished 11th. She also battled for a gritty fourth place result while racing with Caldwell during the Dresden team sprint, and shone at US Nationals earning two sprint podiums.

Racing fearlessly with the best in the world, Kern cracked the top-20 in the skiathlon in Seefeld, finishing 19th. She also finished 23rd in the freestyle sprint two days prior. With another year of training and experience under her belt, Kern will certainly be worth following.

After recovering from mono, Rosie Brennan rebounded with a phenomenal season in 2019 and consequently was nominated once more to the U.S. Ski Team. Last year, Brennan blew through Period 1 with a vengeance, placing inside the top 30 and mostly within the top 15 in all of the distance races she entered. She cracked the top-10 in the 10 k skate in Davos, with a career best sixth place, and again in the skiathlon when the competition was at its peak in Seefeld.

The remainder of the women starting in Ruka who earned discretionary selection includes: Caitlin Patterson (USST B Team/CGRP) who landed inside the top 30 in the 10 k skate in both Lillhammer and Ulricehamn, SWE, Hailey Swirbul (USST B Team/APU) who stood on the podium after three Opa Cup distance races and landed inside the top 10 at U23 World Championships, and Rosie Frankowski (APU) who finished 24th during the skiathlon at the World Ski Championships in Seefeld.

The second weekend of racing in Lillehammer features a distance pursuit, followed by two sprint events in Davos, SUI and Planica, SLO. These women will be able to focus on the races that best suit their strengths in Period 1.

Before heading to the American men’s field, FasterSkier sends well-wishes to Hannah Halvorsen who was slated to contest the Period 1 sprint races. Halvorsen was struck by a car while crossing a street in Anchorage on November 1st, fracturing her skull and badly injuring her left leg and knee. According to her father who posted information on Facebook, Halvorsen will have a long road ahead of her, but doctors are optimistic that full recovery will be possible. FasterSkier wants to respect the privacy of the Halvorsen family, but will report when they are ready to share further information. 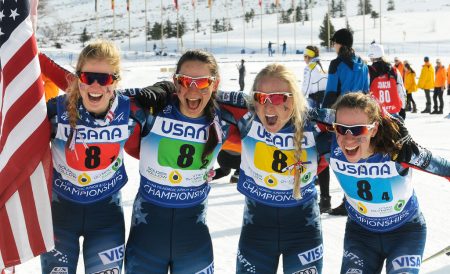 Deep breath. Back to the World Cup.

Returning with a wealth of World Cup experience, Hamilton is a consummate contender in sprint races. His most noteworthy performance was aptly timed at the World Championships in Seefeld where he finished ninth. Hamilton advanced from the quarters in a lightning fast heat, then got hung up with another skier in the semi, losing both his momentum and contact with the leaders. On home turf, Hamilton also won the freestyle sprint during the SuperTour finals. 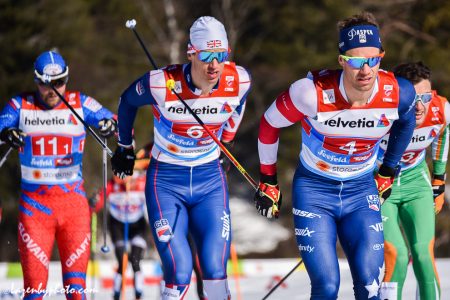 Before World Champs, Hamilton had a strong performance in Cogne, finishing just off the podium in 4th. Displaying the agility and sure-footedness for which he is known, Hamilton dodged a crash in both the quarter and semifinals. This race marked a turning point in his season as crashes and illness prevented him from capitalizing on the fitness he felt confident he possessed. When the pieces come together, Hamilton is both a force to be reckoned with and a thrill to watch.

After popping the third fastest time of day during the 15 k classic pursuit in Lillehammer, Bjornsen has been promoted to the USST A-Team. Last season, Bjornsen whittled his way up the results list, particularly in distance racing. He finished 16th the 15 k classic Cogne, followed by a 17th place finish in the same event in Seefeld. Are you noticing a theme here?

Once again in the 15 k classic in Quebec City, Bjornsen finished 18th followed by a second top 20 (19th fastest time of day) in the subsequent 15 k skate pursuit. At the SuperTour finals, Bjornsen took the win in both the distance races and finished second in the freestyle sprint, demonstrating his versatility as an athlete.

Bratrud’s lead in the SuperTour was primarily garnered through strong results in distance skiing, which also translated to encouraging results on the World Cup. The Minnesota native stood on the podium six times in NorAm and SuperTour distance races, taking the top spot in four of them. At US Nationals, he won the the 15 k classic and took second in the 30 k skate. During his mid-winter international stint, Bratrud landed inside the points in the 15 k classic in Cogne. This will be his first season racing on the World Cup in Period 1.

The remainder of the men to watch in Period 1 include Scott Patterson (USST/APU) and David Norris (APU), who will be focusing on distance racing, and Kevin Bolger (USST/SVSEF)  and Logan Hanneman (APU) who will focus on sprint events. Hanneman will not start in Ruka, but plans to compete in both Davos and Planica. 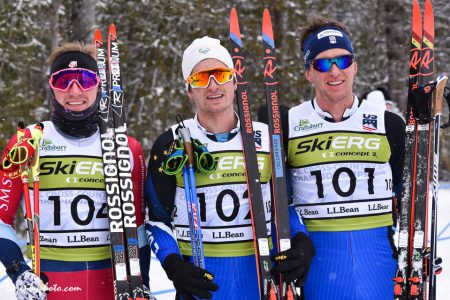 Phinney underwent shoulder surgery in mid-June for a torn labrum, which occurred from a fall with an outstretched arm. He doctors estimated a six to twelve month recovery process. Phinney spent six-weeks in a shoulder sling, then began to slowly reintroduce strength training and outdoor activities. So far, she has done some no-pole and one-pole skiing.

“My biggest priority is making sure my shoulder heals properly and gets back full range of motion,” wrote Phinney in an email on her return to competition. “I’m not sure when I’ll be back to racing, perhaps later this season if things go really well with rehab. In the meantime, I’m enjoying time at home in Boulder – it’s been nice to see friends and family here, and to explore life outside of the bubble of training and racing. And then in a couple weeks, I‘ll be at the first SuperTour races of the year to help my SMST2 team out with ski testing, driving around, and cheering very loudly! I’m hoping to start using two poles in the next few weeks, and ideally I’ll be able to ski quite a bit in Canmore and Sun Valley and see where I can go from there!” 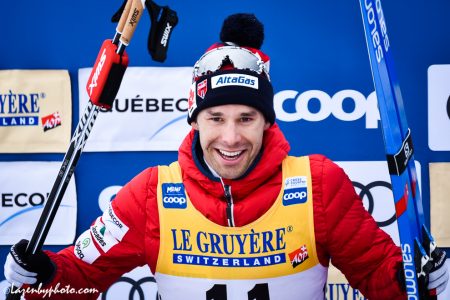 Alex Harvey takes in the cheers after placing second in the men’s 15 k classic in Québec City. (Photo: John Lazenby/lazenbyphoto.com)

Three Canadians will be heading to Europe to race during Period 1 in Davos and Planica:  Dahria Beatty, Emily Nishikawa, and Russell Kennedy. These athletes will then return home to train with developing national team athletes and compete in NorAm races. Canada will not be contesting the Tour de Ski. Should one of these athletes pop a top ten in those Period 1 races, the decision not to return in Period 2 may be reevaluated.

This focus on domestic racing and development of world class athletes is part of a larger movement to rebuild the Canadian national program, which recently rebranded as Nordiq Canada. You can find more information on this here.

Beatty posted strong results in 2019. She started her season with a slew of NorAm wins then collected a handful of FIS points by finishing 16th in the freestyle sprint in Dresden and 24th in the same event in Lahti. She also won the 15 k freestyle pursuit at the Canadian National Championships, chasing down Nishikawa who had won the 10 k classic the previous day. In her season opener at Nordiq Thunder, Beatty landed the top spot on the podium in the 16 k skate and commented that she was happy with her overall fitness and how her training has progressed this year.

Kennedy, who has already gotten his feet wet with European racing this season in Olos, Finland, posted his best result during the freestyle sprint in Cogne, where he popped a 12th place finish. Domestically, he landed on the podium in five NorAm races.

“This group is ready to step up and carry the torch for a new era of cross-country skiers in Canada,” said Shane Pearsall, chief executive officer of Nordiq Canada in a press release. “They are equally as fierce and determined to deliver medal winning performances as their heroes before them. We are going to work with our sport and funding partners to deliver this dynamic group of athletes the tools they require to succeed on the road to 2022 and beyond.” 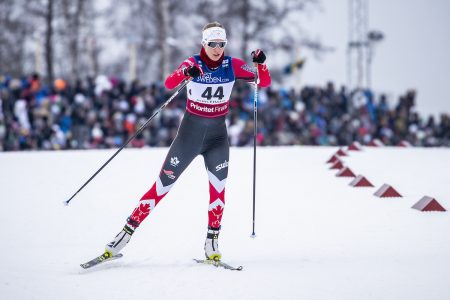