Craig Wiggers is a biathlete based in Ithaca, New York. Below we have a brief intro from Wiggers and an excerpt from his book, Nordic Warrior? A Midlife Crisis in Biathlon. As the title suggests, Wiggers came to skiing and biathlon midlife. His experience and anecdotes reveal a universal truth: it’s never too late to be fearless and try something new. 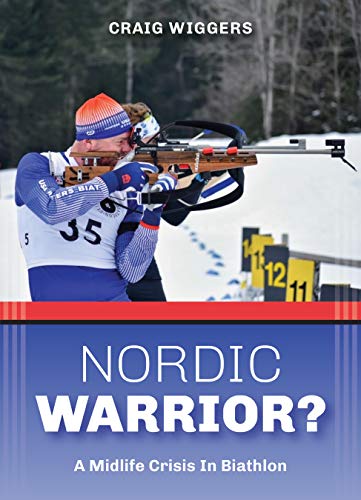 My journey into Nordic biathlon as a southern raised, middle-aged, New York transplant has been exciting, funny, and memorable. This story is written for sports enthusiasts who are interested in challenges, are considering trying something new, and want to laugh. I hope my adventures (and steep learning curve) will be informative for newcomers to the sport and entertaining to those who have lived their lives growing up on skis in snow-covered landscapes. Finally, to those who might “give it a go,” know that you will be joining a community of wonderful, supportive, and generous people who love the outdoors and enjoy healthy competition.

An Excerpt from “Nordic Warrior? A Midlife Crisis in Biathlon”

The world is filled with stories of men and women who face a mid-life crisis. In a sense, I guess this is another one. But, at the same time, I don’t think my circumstance qualifies as a crisis. The reality is that I am a competitor, and, although this is written in my 49th and 50th years of living, the feelings aren’t crisis as much as they are about going after new challenges and enjoying the journey.

As a child, I grew up in Alabama and now I’m in New York. I joined the Marines while at Auburn University (in Alabama – not New York) and was one of the lucky ones whose final assignment was teaching ROTC. My orders were to Cornell University. I was ignorantly happy about this. I was happy because the other two options were Georgia Tech and RPI. Having grown up in the south, I knew about Tech and didn’t want to live in Atlanta. RPI presented a different challenge – I couldn’t spell Rensssalleeer, so I was happy to be going to Cornell and Andy Bernard’s alma mater.

My wife, Betsy, is also from the south.  She grew up in the small towns of Whigham, Cairo and Thomasville in Georgia. I am so thankful Betsy and I met on “The Plains” at Auburn University and although this story is primarily about me, Betsy took on the new challenges with me so this has been a team effort.

I decided to start skiing this year.  To make things more challenging, I decided to become a Nordic biathlete. Having the background as a P.E. major and being a Marine, I began this journey with an over-inflated ego and was quickly humbled.  I needed to get in shape.

The last event of the 2019 season was scheduled for March 9th. This would give me 2 ½ months to prepare for my first and hopefully not my last race. I had no aspirations of medaling, no aspirations of “shooting clean,” no aspirations of skiing well. My goal was to participate.  I didn’t even know if I could ski 5 kilometers with the novice group.

How in the world did I come up with this genius idea? About two years ago, when I was still in denial that a southerner could enjoy winter, one of my colleagues at work, Dinnie Sloman and I were chatting before a manager’s meeting in January. I asked what he had planned for the weekend and he told me he is going to a race. Race?  In January? He tells me it is a biathlon.

Have you ever seen a dog tilt its head and cock its ears when it hears an unrecognizable sound? I’m pretty sure that’s how I looked. For two years Dinnie would intermittently share anecdotes from his races. It was hard for me to picture skiing and shooting at our age (49 / 59 respectively). I had seen the sport once or twice while catching glimpses of past Olympics, but beyond that, I really didn’t have a clue.

As a retired Marine, I knew I could shoot. All I would have to do is learn how to ski – easy!

I sent Dinnie an email during the week. “Let’s meet for lunch.  I need some advice.” Dinnie met me at one of the campus cafes. As he approached, he could tell I was a little fired up. Do you remember Ralphie from “A Christmas Story?” The young boy had dreams of one day owning his own Red Rider BB gun and saving his town from bad guys. Well, that pretty much sums up the air around me when Dinnie stopped in front of me.

“Dinnie, I am going to become a biathlete!” Confidence, eagerness, and ambition were blazed across my face.  Dinnie would be my mentor and I would be the disciplined prodigy! Yoda and Luke Skywalker, Mick and Rocky, Butch Harmon and Tiger Woods. Within the first five minutes of lunch, I was a machine gun firing bursts of questions at Dinnie.

Dinnie is thoughtful, dignified and a true aficionado of athletic training. I honestly think he has read every book on sports psychology, physical preparation, running, marksmanship and diet. Me, I am more of a Cliff notes guy. I like pictures. If someone were to describe me, they would probably use terms like, impatient and excited. I have often heard from others that what I lack in intelligence, I make up for with enthusiasm. I’m ok with that.

Fast Forward 18 months – This story culminates with the Empire State Winter Games in Lake Placid, NY and Covid-19. As far as I am concerned, I have only written the first chapter.

Success can be measured in several ways. I am not wearing any medals but I am a better person because of biathlon. New relationships, camaraderie with fellow competitors, healthier living, and a determination to improve through training and hard work are my intangible gold. I’ve learned biathlon is accessible to anyone and regardless of your skill on skis, the community will welcome you into the ranks.

If you are interested in purchasing a copy of Nordic Warrior? A Midlife Crisis in Biathlon, you can find his book here for $0.99. All proceeds are donated to US Biathlon.