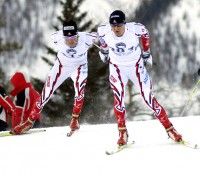 December 07, 2010 (Canmore, AB) – The Alberta Cup Series kicked off this past weekend with a 1km freestyle sprint competition on Dec. 4 and 9km classic race on Dec. 5. Saturday’s freestyle sprint race saw an Alberta World Cup Academy sweep of the Open Men’s podium, with Drew Goldsack claiming the victory, followed by Jess Cockney finishing second and Graham Nishikawa in third. Goldsack was the fastest qualifier of the day, being undefeated in sprint racing so far this year. Perianne Jones (NST) sprinted to victory in the women’s race with Alysson Marshall (AWCA) and Heidi Widmer (AWCA) finishing second and third, respectively.