Lowell Bailey may be getting a lot of attention these days, but the American biathlete isn’t the only one to have found success in the early days of the 2012 World Cup season.

Quietly, the Canadian women have upped their own profile – and their first two weeks of racing culminated in a ninth-place relay finish in Hochfilzen, Austria, tying the U.S. men’s performance.

Team member Zina Kocher, who has been racing in senior-level international races since 2002, had only ever achieved that result twice, and never beaten it.

“Our ninth in the relay is solid,” she told FasterSkier. “The team is moving up together and there is potential for better performances.”

Kocher has been the star of the Canadian team so far, scoring World Cup points in every race she has entered and finishing as high as 15th in the sprint in Ostersund, Sweden. But she’s had company: Megan Imrie has been in the points, too, and collected three of the top ten performances of her five-year World Cup career.

And that, for Canada, is good news.

“Together Megan and Zina will be the backbone of a solid women’s team,” said Biathlon Canada High Performance Director Chris Lindsay. “We expect a huge improvement on last year’s results both individually and as a team.”

Where Did Canada Go?

While the Canadian program has definitely produced fast women in the past – 1994 Olympic gold medalist Myriam Bedard comes to mind – in last few years the team hasn’t shown much depth.

In 2011, only Kocher and Imrie scored World Cup points (which are doled out to the first 40 finishers), and those were few and far between; neither woman made the top 70 in the overall rankings. In 2010, Kocher was ranked 31st and Heinicke the next closest in 65th. Kocher finished 2009 as the only Canadian who even made the rankings, clocking in at 41st.

“When I was still a junior starting out, the women were stronger than me, and I definitely looked up to them,” Kocher said. “I always observed how they did this and that, and was always trying to keep up to them, trying to be as strong and stronger.”

These days, there haven’t been as many senior athletes to serve as role models, just the same stalwart few who have been racing at a high level since they were very young.

“Our women’s team hasn’t changed that much in a few years, in terms of members,” Imrie said.

Canada has recently brought home several World Junior Championship medals, but it’s been hard to translate those results into a robust, deep team or widespread success at the senior level.

“Biathlon in Canada isn’t a well-known or easily accessible sport,” Kocher explained. “The depth in programs, coaches, environment, and finances all play a role… Financial reasons are a big cause of athletes quitting early on. And another aspect is talent and development of young athletes with a solid training program.”

Kocher said that for the last few years, Biathlon Canada has not offered financial support to development or junior national team members – which, she said, would be fine if regional training centers and clubs could pick up the slack. In the past this hasn’t been easy, but luckily it’s starting to happen.

“It’s getting better especially in Canmore and Valcartier, and now with the Biathlon Alberta Training Center we are on the right path to developing these programs,” Kocher said.

While the teams are primarily intended for junior athletes, it’s not a coincidence that the senior women have been improving at the same time.

A Changing Team, A Resurgent Zina

For Kocher, the recent results aren’t actually the best she’d produced. The Alberta native has stood on the World Cup podium before, and scored eight top-ten finishes. But after several frustrating seasons and battles with injuries and mononucleosis, she’s feels like she is finally back on track.

“[It’s] definitely not mind-blowing, just a solid start for the women’s team,” Kocher wrote in an e-mail. “For me, my ski speed is there with the top ten, and that is back to the previous performance potential from before I had mononucleosis.”

Her return to form has come on the back of a major change in the Canadian national team: after seven years, Kocher was not re-nominated for the “A” team for this season. She decided it was time for a change and returned to Canmore to train with Richard Boruta, her first coach.

Megan Tandy – who was the top Canadian at the Vancouver Olympics, finishing 36th in the pursuit – has since married coach Ilmar Heinicke, had a baby, moved to Germany, and took his name. Tandy missed most of the 2011 season, and this year declined a team nomination so that she could stay in Europe. That left only Imrie on the “A” team and Rosanna Crawford on the “B” team.

Have the changes affected team chemistry?

“No,” wrote Kocher. “We are a great bunch and there is really no animosity between anyone. We are always laughing… I’d say other teams might be jealous of our hysterical laughing fits!”

While Kocher said that it initially felt “strange” not to be training with her usual national team group, she has enjoyed the switch to the Biathlon Alberta Regional Training Center.

“Even though some of the girls aren’t as close to me in ski speed as Megan and Rosanna, I did have the young guys to chase!” she wrote. “I really enjoy the Alberta team and my teammates there.”

While she’s no longer a member of the national team, she qualified for the World Cup through trials races and Biathlon Canada hasn’t reacted negatively to her decision to leave the team. Lindsay was still informed about Kocher’s training, and he still had the same goals for the star that he’d had when she was part of his squad.

“Zina’s start has been exactly as expected,” he wrote in an e-mail. “She showed strong results in the physical testing over the summer and she is well situated to be among the top ten fastest skiers on the circuit. Her shooting results so far are in line with expectations and the plan has her continuing to improve shooting results for a peak at the World Championships.

“We firmly believe that Zina is capable of making this her overall best season,” Lindsay concluded.

While the 25-year-old scored World Cup points twice in both the 2010 and 2011 seasons, she more frequently finished in the 40s and 50s, with the odd shooting disaster dropping her far below that.

The start to her 2012 season hasn’t been perfect – she placed 88th in the sprint in Hochfilzen after missing five shots, and did not make the pursuit – but it has been encouraging.

In Ostersund, she placed 41st in the individual, 33rd in the sprint, and 43rd in the pursuit.

“The season start has been better than in the past, but still I feel like I am capable of so much more,” Imrie said.

Her 2011 campaign was cut short by a rib injury, so she came into the next training year relieved and happy to be skiing again. The injury also provided some forced recovery, she said, which made her better able to handle the training volume. As a more mature athlete, she’s begun to understand how important that is.

“I’ve been a good student,” Imrie said. “I’ve learned how to manage my training workload, but also my rest and recovery. I’ve improved in gauging when I need rest versus when I need to push harder.”

Aside from working with new coaches on shooting and ski technique, Imrie said that her strong start was most likely born from the simple fact that she loves the team.

“I’m training again with Matthias Ahrens, who was my coach as a junior,” she said. “Our team is small, and the six of us who train in Canmore get along really well… I’ve stayed healthy from the outset, and looked forward to the team atmosphere each day.”

She didn’t seem to have suffered from Kocher’s move away from the national team, either.

“Rosanna and I train a little bit together, but a lot I do on my own,” she explained. “I’m lucky to be in Canmore, because if I need a training partner, I’m able to join up with cross country skiers, or other biathletes when our schedules fit. I’ve enjoyed many great afternoon workouts with Perianne Jones.”

She understood Kocher’s move and didn’t hold it against her.

“I know that Zina needed a different approach this year to training, so it was fine to be separate,” she said.

Luckily for Canada the separation was only temporary, and Kocher and Imrie have been reunited in Europe. So far, they’re packing a strong one-two punch for the team. Lindsay, the high performance director, believed that Imrie could do even better than she had in the season openers, and follow Kocher more closely in the overall rankings.

“Megan has proven that she is a force to be watched with her season opener,” he said. “We knew last year that she was capable of top-40 results… this year the goal is having consistent top 40 finishes with peaks in the low 20’s when everything goes right.”

And with Crawford, who hasn’t had stellar individual performances this year but cleaned both stages of her relay leg, and Heinicke, who did not make Canada’s three-woman World Cup squad but appeared to be on form with her relay performance, the team is truly succeeding together.

“We have all made improvements and are stoked about the season,” Imrie wrote.

The results so far are something that would have been unusual a few seasons ago, when Kocher was the only one World Cup points.

“For the three of us, all three making the pursuit, [and having] two in World Cup points in the sprint, this is a good overall performance,” Kocher said.

“There is definitely potential for Megan and I to consistently be getting into points… I feel confident that we will be having a consistently better year, as whole team, than last year.”

With No Snow Forecasted, Rumford Prepares For Nationals 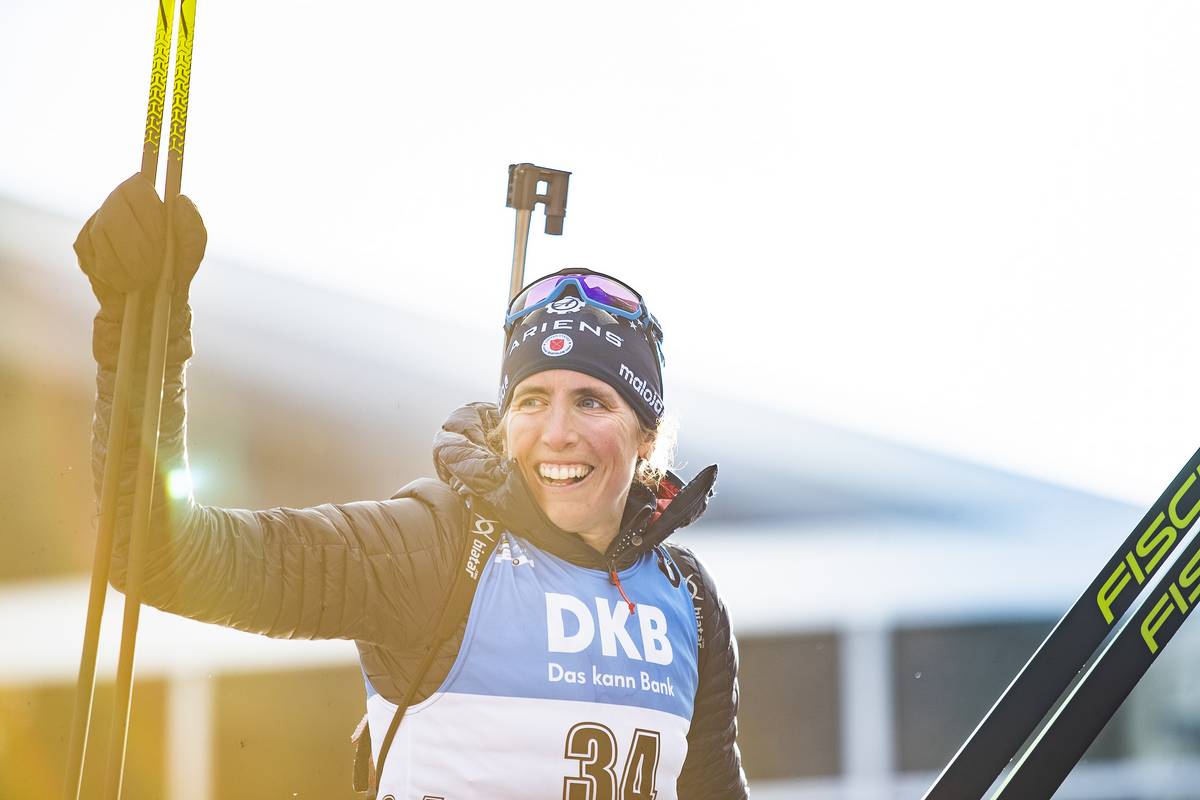