The US men’s biathlon team had an auspicious start to the season. Lowell Bailey in particular skied some of the best races of his life. Let’s focus on the following three North Americans (click for larger version): 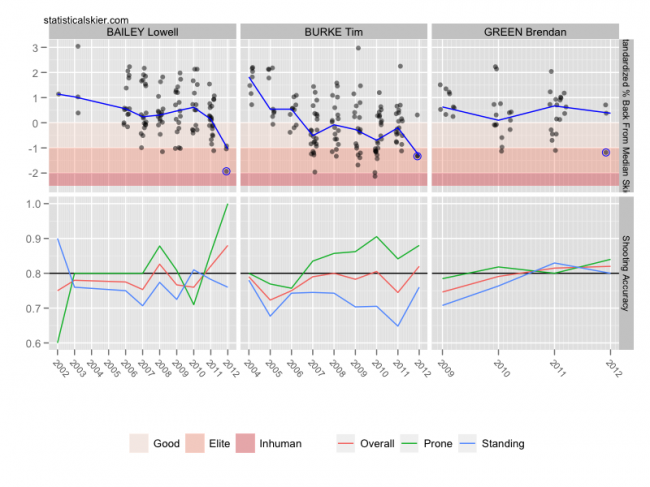 Obviously, the shooting statistics for this season are based on only this past weekend’s racing, so that’s a small sample size. The sprint race from Friday is circled in blue. I’d note that the performances in that race for Green and Burke are at the limits of what they’ve done in the past, but not beyond. In Bailey’s case, though, that was definitely something he hasn’t shown before. He’s been very consistently topping out at around 1 standard deviation better than the median skier, and that race was nearly double that. The statistician in me says “Outlier”, but the fan in me says “Yes!”. We shall see…

While Kikkan Randall grabbed a lot of headlines with the win last weekend, how about the return of Chandra Crawford? It’s taken her a while, but she’s has been improving her sprint racing over the past few seasons: 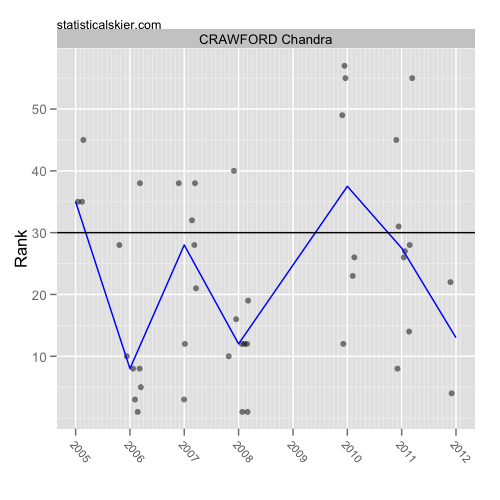 I’ll bet that her results will be better this season than they were last season. But will they be 2008 good or 2006 good? Here’s hoping…