Coming off a season in which Canada got its first-ever World Championships gold in the team sprint, the winners, Alex Harvey and Devon Kershaw, are the Canadians you’d expect to see in sprint finals.

But while the duo certainly haven’t been slacking on the World Cup this year, in Rogla, Slovenia it was the women who impressed in a fast and furious one-kilometer skate sprint on Sunday.

2006 Olympic gold medalist Chandra Crawford returned to the podium for the first time in several years, and Dasha Gaiazova skied to ninth place, the second-best result of her entire career.

Of Canada’s seven starters, all but two – Perianne Jones and distance expert Ivan Babikov – made the heats.

“Placing two women in the top ten and all five of our sprint team in the top twenty is a solid day, even though the guys, you know, weren’t as strong as they have been in the past,” said national team Head Coach Justin Wadsworth. “Overall, it’s still a good day.”

The best day – Crawford’s – was covered in our international report. But in terms of personal-bests, Gaiazova was almost as excited as Crawford.

“For her to be top-ten, that’s her best-ever skate World Cup,” Wadsworth said. “It’s a big day for her too. She’s going to be overshadowed by Chandra, but she had a good day as well.”

In her quarterfinal, Gaiazova was at the back of the pack after the initial twists, turns and downhills; she wasn’t even visible in the camera frame of the race broadcast. But she used an impressive burst of speed to make her way to the front on the uphills and ended up second in her heat – which happened to be the fastest of the all the quarters. As a reward, Gaiazova earned an automatic entry to the semifinals.

“I was really impressed with her in that quarterfinal,” Wadsworth said. “She was almost last going into the climb over the bridge, and she just used her strength and powered through the field there. It was really exciting to watch.”

Gaiazova was matched with eventual winner Maiken Caspersen Falla and Kikkan Randall in her semifinal, and ended up fifth, 2.6 seconds back. Her effort was still good for ninth place, just the second top-ten of her career.

The Canadian has shown her sprinting chops before, placing eighth in a classic sprint in Estonia and securing bronze in the team sprint in Dusseldorf with Crawford last year. But today was nevertheless a breakthrough.

While Gaiazova had an awkward falling-out with the national team this summer, it does not seem to have affected her racing.

The men, whom everyone expected to make a splash in the sprint today, were solid, if not spectacular, finishing in the high teens.

“I felt really good today yet again, but I am not super psyched about the result,” said Kershaw, who finished 15th. “I had a great body this weekend, and to come away with only a 16th (in the 15km classic) and a 15th today wasn’t what I was shooting for.”

Kershaw, who struggles in sprint starts, pointed to the short, twisty course as part of his problem.

“He [relies] on his fitness a little bit, so he just settles in and works his way through the pack,” Wadsworth said. “But on really short courses I think it’s better not to have to find the spaces to move up because everybody is at such a high speed the whole time.”

With very little space to move and the only big uphills at the end, Kershaw did not have the chance to make up that ground that he usually loses in the first 100 meters. While he tried to make a move at the end, he wound up third, 0.9 seconds back.

“I ran out of real estate down the stretch,” he told FasterSkier. “I was too far back, and the course was really tight. I felt like I just couldn’t get around and use my speed today…. It didn’t help that I was outgunned by both [Dario] Cologna, who won, and [Ola Vigen] Hattestad, who was also in the final.”

A second later, teammate Len Valjas crossed the line. Valjas has had better sprints already this year, but he had an excuse for ending up 18th today.

“He’s been sick the last two days and I think he’s probably still a little sick,” Wadsworth explained. “He had two full days in bed and then hopped out of bed today and had a good qualifying, and it shows that he’s a real player when it comes to racing.”

The coach said that he was thrilled that Valjas could even qualify for the sprints, calling it icing on the cake for an already solid first period of racing.

Harvey also couldn’t find the top gear he needed, finishing fourth in his heat behind Federico Pellegrino of Italy and Eligius Tambornino of Switzerland.

As for Babikov? He wasn’t too upset about his 74th-place qualifier.

“Nope, no miracle happened today, I still can’t sprint,” he joked on Twitter.

With the first period of racing finished, Harvey, Babikov, and Kershaw will travel back to Davos to train for the Tour de Ski, while the rest of the team is headed back to Canada for the holidays. 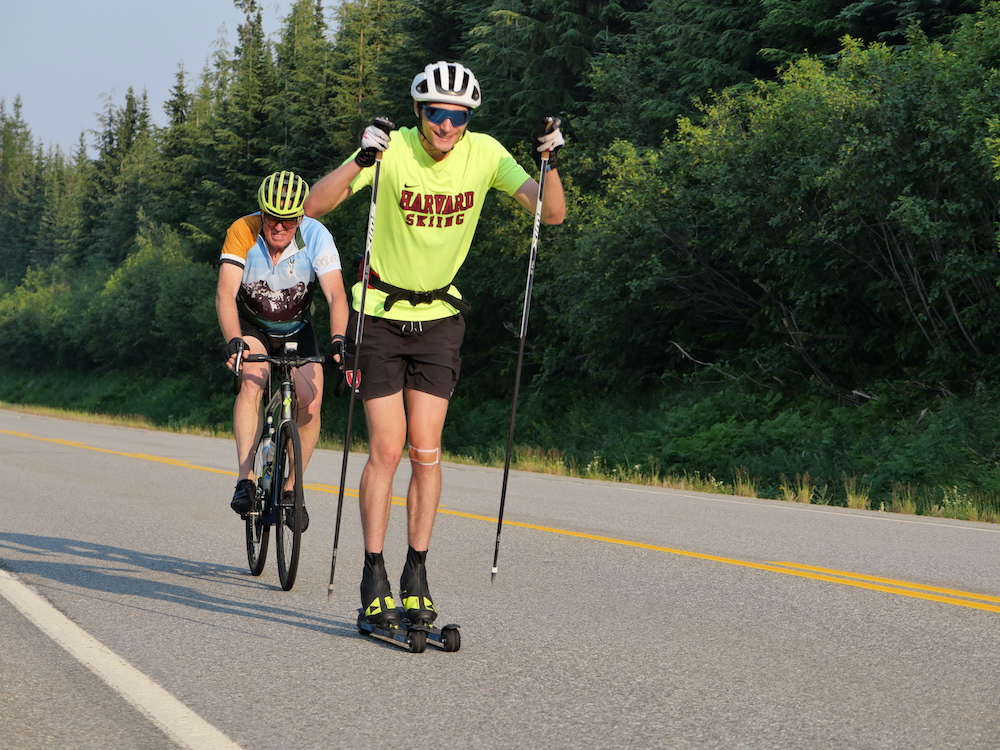