I’ll confess that I don’t much care for team sprints, so I suppose it’s not a surprise that I was more impressed by Diggins’ individual sprint than her podium performance paired with Kikkan last weekend.

When I collect results data, I only track age very crudely, using the year of birth indicated by FIS on the results, so as far as my database is concerned, Jessie Diggins is 21 years old. 18th in a World Cup sprint at 21 is pretty darn good. 115 other skiers (men and women) between 1992 and 2007 have achieved an 18th or better in a major international competition by the age of 21. 62 of those  have gone on to podium in an individual race. The sobering way of looking at that is to say that it means there’s ~43% chance that Diggins will not podium in an individual race. Obviously, there’s the flip side of that as well.

How does this result compare to past Americans aged 21 or younger?

Only Andrew Newell and Torin Koos have bested that (again, using my crude measure of age) with a 15th and 9th, also in sprint races at the age of 21. It’s also important to note that 5 of the 13 best results listed below came from races held in North America, which generally tend to have weaker fields.

I’ve been slacking on the biathlon coverage lately, but with some more strong races this weekend by the US men, I thought I’d write something up. Reading about the sprint race in FasterSkier, I noted Max Cobb musing that that may have been the best day ever for US men’s biathlon (as a team). That kind of comment draws me like a moth to a flame, so I did some checking, and I think he’s probably right. These are my top candidates for the best overall team performance in a WC or major championship race by the US men:

Those are the best I could find (requiring at least 3 US men in the race at all; there have been better single results, of course). The first two from this season are obviously better than the others, and are really the only possible choices, I think. And I feel comfortable giving the win to this Saturday’s sprint thanks to Currier’s 6th besting Burke’s 9th alone.

Currier’s race alone was pretty amazing. Personally, I’ve noticed, observing the sport through the cold hard lens of raw data, that in biathlon the occasional exceptionally good (or bad) result happens quite regularly. In Currier’s case, the FasterSkier article I linked to above noted that his shooting has held him back  in the past: 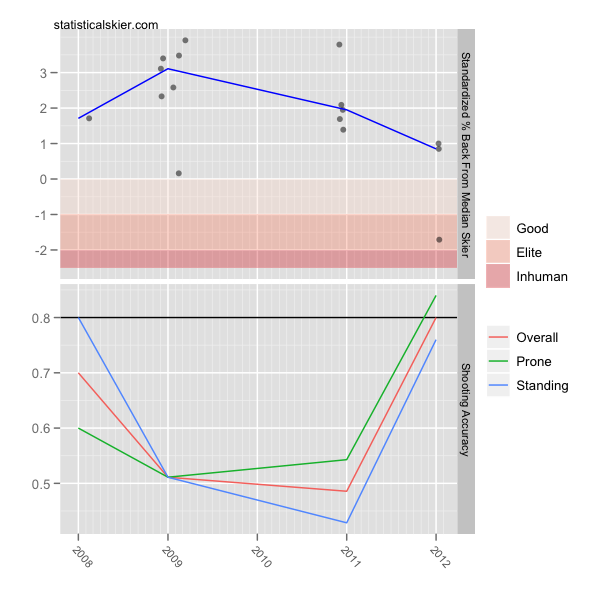 And that certainly seems fair. But while I wholeheartedly wish Currier would continue in this vein, the topsy-turvy world of biathlon makes me hesitant to expect this kind of race from him on a regular basis. We’ll see, though. I love being wrong about this kind of thing.

One person, one pole!