A weekend of exciting races and great atmosphere encapsulated the 2014 Middlebury Carnival, which doubled as the EISA Regional Championships. The venue and course, familiar to many as the site of last year’s NCAA Championships, did not disappoint. The twists and turns of the Tormondsen Family race course have now seen numerous high-level events, and have not failed to deliver excellent competition.

This past weekend was no different, with a wild classic race held in rain, sleet and violent wind. A thunderstorm even rolled through the mountains of Ripton after the nordic events, putting a stop to alpine competitions just up the road. Though the conditions created some challenges to organizers and racers alike, the competitions continued to showcase the top talent of the EISA skiers.

Klister was the order of the day for most on Friday. A mix of granular snow and wet tracks necessitated solid kick on the long, steady climbs spread across the homologated 5k loop.

With his final Carnival race at his home course, in his preferred discipline and among his biggest supporters, Middlebury senior Ben Lustgarten did not disappoint the home crowd on Friday. Lustgarten rocketed around the course, putting 25 seconds into the field over the first half of the race before doubling-down on lap two for a 50 second victory over UVM’s Scott Patterson.

Lustgarten notched a 4th place finish and claimed the honor of top American in the same event and on the same course at last year’s NCAA Championship, and on Friday he again proved his striding and pacing prowess. Lustgarten and Patterson were joined on the podium by UVM’s Jack Hegman, who used a fast second lap to nab the final podium spot just ahead of his Catamount teammate Rogan Brown.

The women’s race saw many familiar faces near the top of the results. Despite being runner-up in what seemed like nearly EISA event, Dartmouth’s Annie Hart was able to finally pick up her first win of the season on Friday, edging UVM’s Linda Danvind-Malm by 6 seconds.

Hart’s Dartmouth teammate Corey Stock picked up the first podium of her season in third, while UVM’s Anja Gruber had an uncharacteristic off-day on the classic tracks in 4th place.

Finishing just 5 seconds behind Gruber was Colby freshman phenom Amy Bianco, who skied to the top finish of her young collegiate career thus far with a 5th-place showing.

The final event of the EISA season saw shakeups at the top in both the men’s and women’s races, with perhaps one of the most exciting races of the season happening during the men’s competition.

Halfway through the men’s race, UVM’s skating powerhouse Scott Patterson made what has become a signature move: attempting to gap the field by a wide margin before cruising home alone to victory. Last year several skiers made valiant attempts to stick with the “Patterson break”, most notably Dartmouth’s Sam Tarling. During the 20km freestyle at last year’s Middlebury Carnival, Tarling broke away with Patterson’s initial move, but was unable to keep up and drifted into second place almost a full minute behind.

This time it was another Dartmouth skier who attempted to latch on to Patterson as he strung-out the field. Paddy Caldwell not only matched Patterson’s initial break, he hung on for the duration and traded leads with the UVM senior throughout the race.

On the final lap it was Patterson in the lead, with Caldwell waiting to pounce less than a few boot lengths behind.

Caldwell had executed a tactically excellent race, and he wasn’t about to let it slip away at the line. As the two made their way to the stadium a sprint ensued. With a gap large enough to celebrate with arms raised high, Caldwell celebrated a triumphant victory.

Patterson may have been dethroned temporarily, but he did not relinquish his freestyle Regional title without a great effort and show: the duel at the front put both Caldwell and Patterson over 40 seconds ahead of third and fourth place, which went to Dartmouth’s Silas Talbot and UVM’s Rogan Brown, respectively. Williams skier Will Wicherski rounded out the top 5 with a fifth place finish.

The women’s race featured another breakaway, and with it another duel between the top skiers from Dartmouth and UVM.

As the race progressed into later laps a leading group of four emerged: UVM teammates Anja Gruber, Linda Danvind-Malm and Stephanie Kirk, along with Dartmouth’s Annie Hart. Behind this lead group was a hard-charging wave of Dartmouth racers composed of Emily Hannah, Carly Wynn, Isabel Caldwell and Corey Stock.

It looked like the race would be a four-way battle for first until midway up the final long climb of the course. With encouragement from coach Patrick Weaver, the UVM women accelerated in unison and matched strides with increased tempo, immediately dropping Hart and setting themselves up for a podium sweep.

That inevitable podium sweep was brought home in a sprint finish by Stephanie Kirk, who earned her first EISA victory. Gruber placed second, while Danvind-Malm took home third. All three were ecstatic with the result, which capped a great regular-season campaign  for the UVM women.

Though the Catamounts swept the podium, the force and depth of Dartmouth was also staggering. Places four through eight all went to Dartmouth skiers, with Hart taking fourth and Corey Stock earning her second top-5 finish of the weekend.

Results can be found via Bart Timing

Racing action next moves to the NCAA Championships in Soldier Hollow, Utah 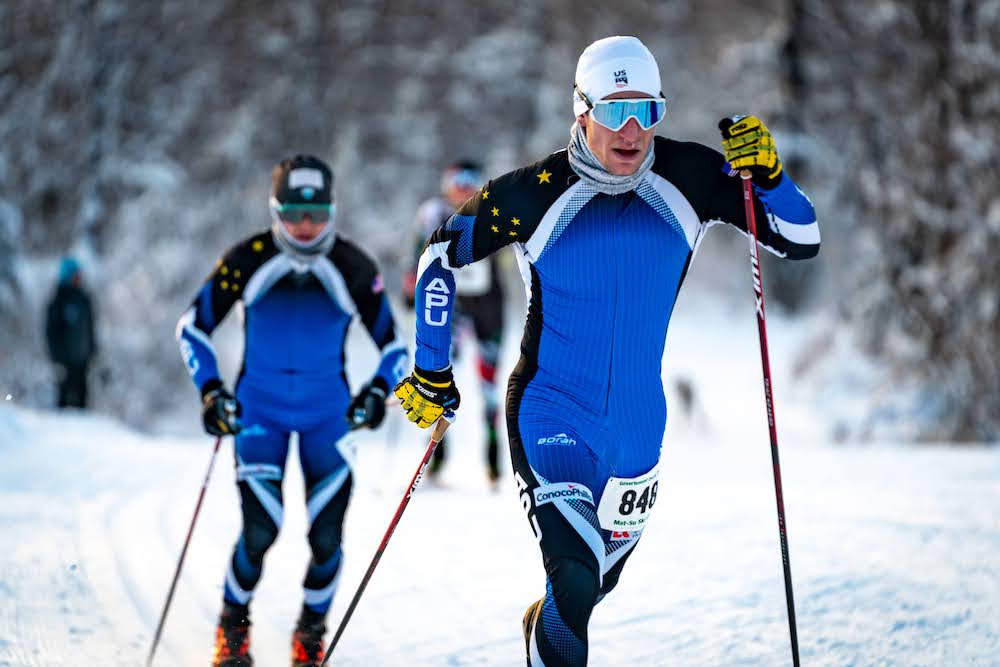