Toko Glove All Stars: Ida Sargent
1.  Who was your skiing role model when you were growing up and why?
Chandra Crawford- I watched her win Olympic gold with the biggest smile on her face and it doesn’t get more inspiring than that!
2.  What skier inspires you currently and why?
Kikkan Randall- she is a leader for our team and an incredible role model. Kikkan isn’t afraid to set big goals and believe in herself as she chases them to success!
3. Favorite race course and why?
The courses in Kuusamo are my favorite. I love the big steep uphills and fast downhills.
4.  Favorite workout and why?
In the winter when the conditions are right it’s impossible to beat a long classic ski especially when it is firm tracks and sunny skies! In the summer I love point to point running ODs and mountain biking on fun singletrack. I also love max bounding intervals because it’s so easy to go hard and push yourself to new lactate burning highs!
5.  Favorite place to train and why?
Craftsbury Vermont! In the winter there are so many awesome trails to ski and they do a great job with grooming and snowmaking. Then in the summer there are lots of trails for running and mountain biking, a lake to jump into after every workout, and not much traffic for rollerskiing. It’s also very quiet so a great place to focus training and the goals at hand!
6.
Favorite Toko glove model (and/or color) and why?
So many great options! I like the classic for racing and for training I usually have cold hands so I love the Arctic glove and mittens and the new Stars and Stripes colors are awesome!

Field Report from Momentum Northwest from the Canadian NorAms
I just got back late Sunday from our first racing trip, to Silver Star for their NorAm. I brought six athletes up, all with some racing experience but they were definitely thrown in to the deep end of the pool given the immense number of Canadian juniors present, and the fact that these races represented qualifiers for upcoming junior trips and such. My guys were awed but stuck to their guns and performed really well, not only in results (which on paper weren’t exceptional but experientially they all came away with excellent lessons), but in execution of their race plans and general habits on a trip.
I was able to team up with Scott J for the sprint waxing day. Temps were in the low-mid 20s (F) with fresh snow that had a fair bit of moisture. Base wax was LF Blue – a no-brainer for both Scott and I because we’ve always had success with that as an underlayer; no reason to test.
Scott arrived earlier than I did on the morning as he had an older athlete, and tested a variety of (4 different brands) topcoats. When I arrived I threw Jet Stream Red and Blue blocks into the mix, later to add Helix 2.0 Red. His winner was (a product from another brand). I put JetStream Blue against the (previous winner from the other brand) and it was solid – a toss-up in some places but JS ran really well (even better, I’d say) on initial acceleration, especially. We chose JS Blue as the block.
For liquids, he didn’t have any of the new Helix so I prepped up a test ski with 2.0 Red and put it against his own. The Helix kicked butt – free all the way from acceleration to top speed on downhills. Scott hadn’t had a chance to use the new versions yet so he was understandably excited to see the results.
We went with the LF Blue paraffin, JS Blue block, and Helix 2.0 Red. Because the weather didn’t change much but the tracks began glazing a bit following all the skiers, the Helix seemed to adapt well to that change and continued to run even in the heats.
The next day offered very similar snow but with new snow falling; I used the same combination of waxes and again they ran great; all my guys had skis comparable or better to those around them (even though many of those skiers around them were skiing faster; glide was better on downhills).
I’m excited to learn how effective that new Helix is, and that I’ve got a couple cans of the Red to work with. We have a few weeks of training before the first Junior Qualifier weekend in Bend, but I’ll touch base with you again after that to let you know how it goes.
Have a great holiday!
Sam Naney, Head Coach Momentum Northwest

Field Report from Mansfield Nordic Club
Eastern Cup #1, Craftsbury, VT
December 19th, Freestyle sprints
December 20th, 5km Freestyle for all
Friday afternoon conditions were transformed corn snow the was fast and slick. Overnight, temps dropped to the mid-20s and new snow fell. For the men’s race, temps were mid 20’s rising toward 30 with intermittent sun and clouds. the snow was skied in, fast and slightly glazing from traffic (the qualifier was 2.5 laps per racer, with 200 male and 200 female racers).
Paraffin layer was a hard layer of graphite (Start brand) followed by Toko HF Red mixed with Toko LF Grey.
In a test of Jetstream Red 2.0 Block and Helx Red 2.0 the block was preferred and this was the main topcoat for all skis, rotocorked in and brushed.
For structure, it was an extremely close call between the Blue Toko Structurite and a cross-hatch pattern created from a Swix tool. The blue was great climbing, but the Swix pattern was great at high speed and when riding flat skis. Because the course only featured one short, significant section of V1 we opted for the Swix tool.
All of our skiers felt that their skis were running great and we had some strong performances, most notably a 2nd place in the U16 qualification round.
During the qualifying round and before the heats, a big snowstorm rolled in and coated everything. Conditions slowed and the new snow on top of the manmade base meant interesting testing. For the heats we ended up actually dropping down in range to the Jetstream Blue 2.0 block via rotocork topped with Helx Blue 2.0 and the same structure. To make the structure more fine I applied it after corking but before brushing the Jetstream. Between rounds, a little more Blue 2.0 block was briefly hand-corked and re-brushed up.
A touch more snow fell overnight and temps dropped to the low 20s, and the snow guns were blasting as well. Early Sunday morning ski testing was the best snow of the year so far: firm, silky corduroy. I think pretty much every coach/wax tech out there was having a blast due to the great conditions.
Paraffin layer was HF Blue for the women, and a mix of HF Blue and HF Red for men.
I tested Jetsream Blue 2.0 block versus a mix of Jetstream Blue Powder and X-Cold powder mixed 1:1. Both felt great, so I was confident that a powder layer followed by a block would be a reasonable call. With the sun coming out and the track glazing a bit before start time, I took the X-cold out of the equation and just ironed Jetstream Blue powder into all skis. That was followed by the Jetstream Blue block rotocorked in, then the blue Structurite tool.
The women were really psyched with their skis and we had at least one really great race. There was a delay to the men’s race, meaning another opportunity to test. The only change I made was mixing the Jetstream Red and Blue blocks together, and the men were equally pumped to have skis that they said were fast and smooth. Another podium in the U16 men’s field was a highlight and capped off a great first weekend of Eastern Cup racing!
Adam Terko, Head Coach, Mansfield Nordic Club

Toko Grip & Glide Wax: For No Wax Skis
We get asked all of the time how treat no wax skis and more specifically often times how to prevent wax from clumping up in the kick zone in new falling snow around 32f.  The solution is simple: Toko Grip & Glide Wax.
Apply Grip & Glide Wax to the entire base of the ski – both the glide areas as well as the kick zone.  The glide areas will glide faster and the grip zone will not have snow sticking to it.
One thing to watch for though is if the kick zone (tread pattern) already has dirt in the corners and cracks. If this is the case, clean it well with a tooth brush and some wax remover if there is ski wax in there or just soapy water if it is just dirt.  Once this is done, then the regular preparation mentioned above will serve you well.
Grip & Glide Wax is available at most Toko Nordic dealers and has a MSRP of $15.50 for 100ml (pictured above) and $19 for the 200ml size. Enjoy!
All Toko Gloves are now Touch Screen Capable!

Valjas Sprints to the Semis, Back in Top 10 in Oberstdorf; Harvey and Newell in the Heats

First Win for Iversen, No Surprise to Roommate Northug 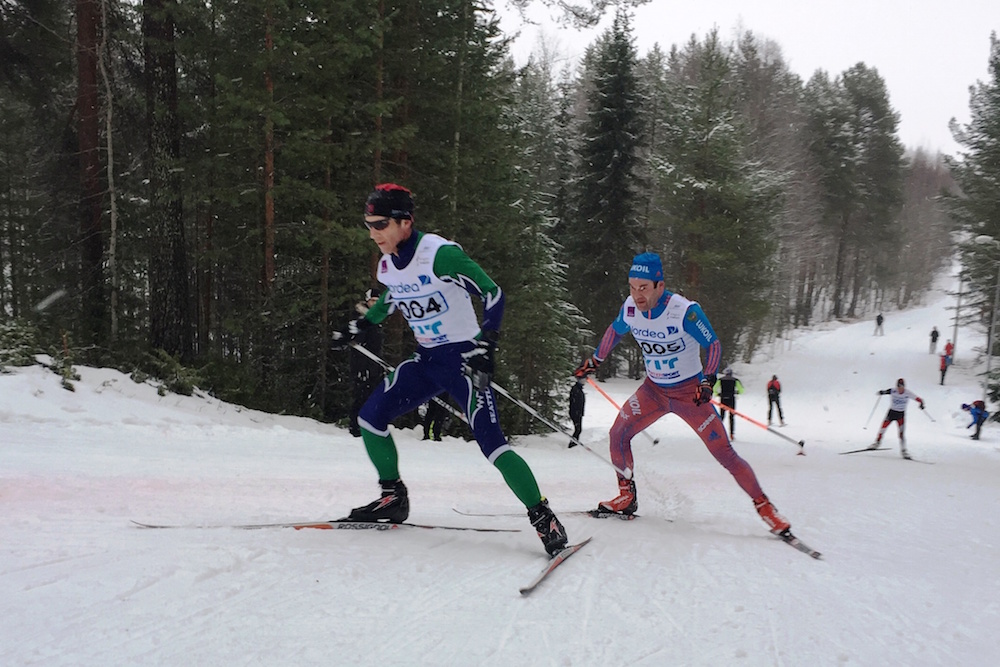 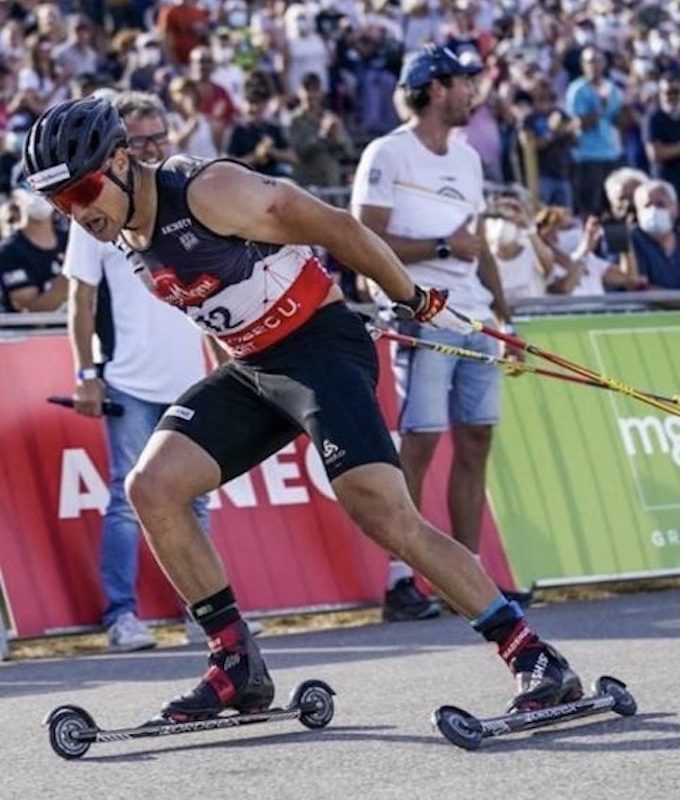