If you’ve read the International Ski Federation’s (FIS) website in the last few weeks and deviated from exploring the cross-country sub-site, U.S. alpine star Mikaela Shiffrin has been prominently featured. Her season was record-breaking. With 17 wins, she set a FIS World Cup record for alpine victories in a single season. With the fattening of her win total, was the commensurate growth of her bank account.

She became the first World Cup skier, male or female, to earn more than one million Swiss Francs (CHF) in prize money during a single season. She won 886,386 CHF for her regular World Cup haul, and 114,000 CHF for her gold and bronze at the Åre, Sweden Alpine Ski World Championships.

As of this writing, with the exchange rate set at 1 CHF = 0.98 USD, that equates to 980, 447.25 U.S. Dollars. Not exactly bottom feeding for a professional skier. (Since the beginning of April, the dollar has lost value against the Swiss Franc.)

On the cross-country World Cup, Norway’s Ingvild Flugstad Østberg, the overall winner, was first on the money earnings list with 175,900 CHF. Her teammate Therese Johaug, the winner of the distance crystal globe, earned the second highest total with 146,375 CHF. (American Jessie Diggins was eighth with 54,525 CHF in earnings.)

Sweden’s Stina Nilsson, the fourth-ranked prize money earner and winner of the sprint globe earned just shy of the 100,000 CHF mark with 97,575 CHF in total earnings. Beyond her presumably sizable income from sponsors and endorsements, this is a proud living for fast skiing. Yet, it becomes a precipitous drop off in earnings from 10th place (Russia’s Yulia Belorukova with  40,950 CHF) to 30th, where Norway’s Kari Øyre Slind amassed 7,450 CHF.

Of the ninety female athletes on the money list, 32 earned less than 1,000 CHF.

According to the Rules for the FIS Cross Country World Cup, the organizing committees must divide a sum of 40,000 CHF per individual race amongst the top-20 skiers. The winner receives 10,000 CHF, second place 7,500 CHF until the 20th place skier is left with 100 CHF. (See below for the specific breakdown.) 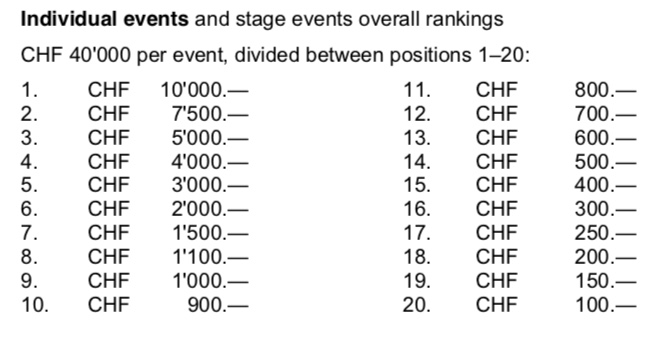 As far as earnings for the World Cup overall, each gender divides 82,500 CHF amongst the top six athletes. (See below for the breakdown.) 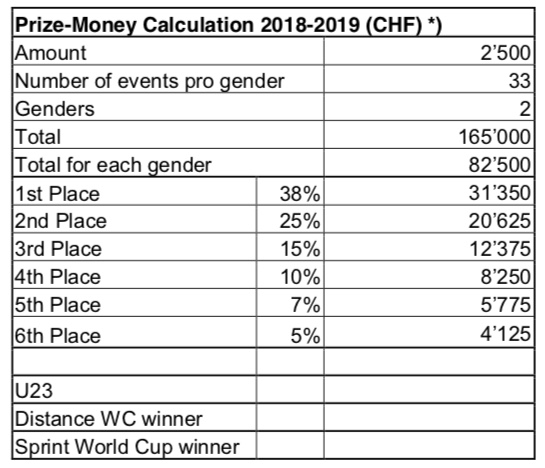 Like on the women’s side, those who dominate the men’s podiums collect the cash. Norway’s Johannes Høsflot Klæbo, with 207,500 CHF, was the top-ranked male on the money list. Of the top-ten male earners, six were Norwegian, two Russian, one Italian, and in tenth was Canada’s Alex Harvey with 35,550 CHF.

Only the top two athletes on the men’s list earned more than 100,000 CHF: Klæbo and the second overall prize money earner, Russia’s Alexander Bolshunov, with 139,625 CHF.

Breaking the numbers down.

Twenty different women stood on individual World Cup podiums this past year. For the men, the number bumped to twenty-eight different skiers.

Prize money is skewed towards the top performers. It follows that skiers like Østberg and Johaug would lead the money standings: Johaug won 11 individual World Cups this year, Østberg five. Østberg stood on twelve individual podiums and finished second a total of three times and placed third a total of four times. Nilsson, the top sprinter, won eight individual World Cup events. She also placed second once for her nine total World Cup podiums. The chart below shows the drop off in earnings for the women’s field — the top spots in World Cup races are secured by a relatively small number of skiers. Over twenty-nine individual races, three different skiers — Johaug, Østberg, and Nilsson — amassed 24 total wins.

By comparison, Diggins stepped on five podiums and placed fourth through 10th nine different times. Russia’s Yulia Belorukova, the tenth-ranked money earner, won a single race for her only podium and placed between fourth and 10th on 11 different occasions. The money stays near the podium: 10th place earns nine percent of the winner’s take in distance racing. That’s 900 CHF for placing 10th in the world. 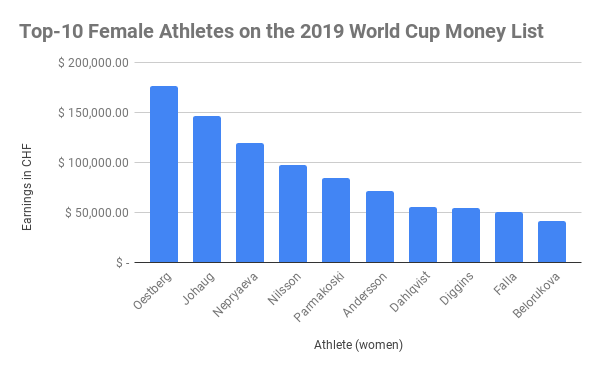 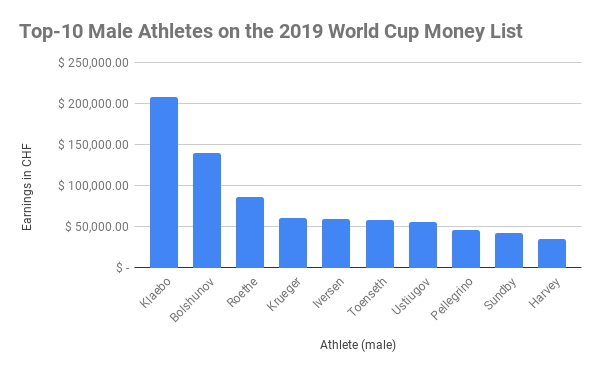 The trend of top-heavy earnings in the World Cup field is no mystery as this FasterSkier article from 2015 suggests. The article was titled, How to Score Points and Win Money on the World Cup (Hint: Be Norwegian). For the men, the main theme of that article still rings true. Norway had 28 different athletes in the money this season. In a nation to nation comparison, Norway’s men won the most cash. Russia, with 17 skiers earning prize money, clawed at Norway. Sweden, a country we often think of as a powerhouse, has been unable to field a well-rounded men’s team recently and lags behind the earnings of Italy (that’s skewed by Federico Pellegrino) and France. (Link to an interactive chart of the men’s data here.) 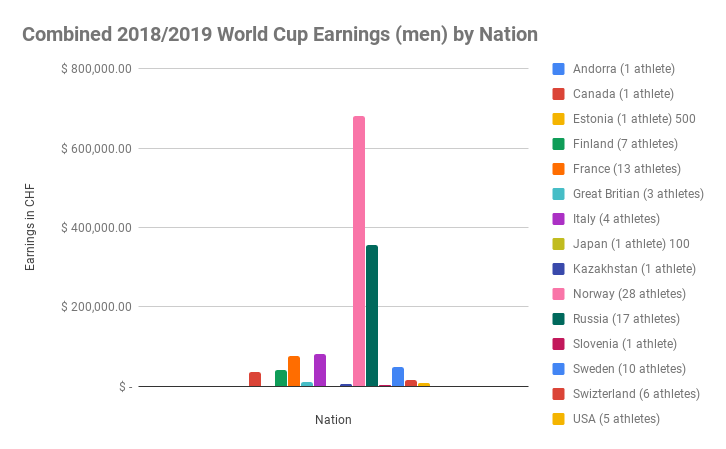 The nation to nation comparison for the women reveals a Sweden that has emerged as a challenger to Norway. Norway prevails with 472,375 CHF in total earnings. But, Sweden and Russia are serious contenders, while Finland and the U.S. have also separated themselves. (You can link to an interactive chart for the women’s data here.) 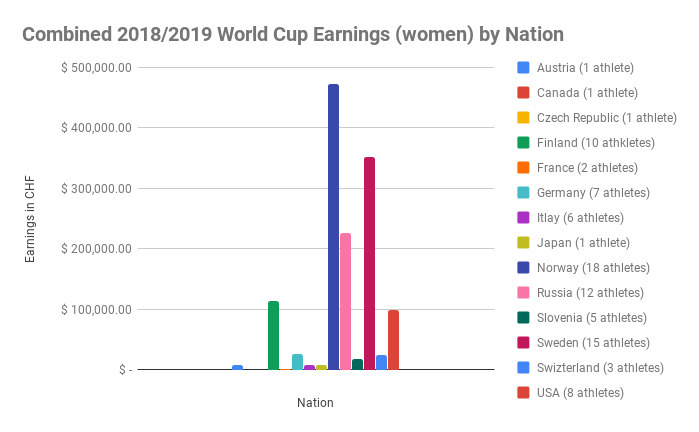 Does it pay to be an elite cross-country skier? That depends. And it may be of no concern to those who compete simply for the love of their chosen sport. Yet, for those at the top of the xc skiing food chain, prize winnings along with the padding of endorsements can make for a comfortable life. And it still doesn’t hurt if you are from Norway.

Biathlete of the Year